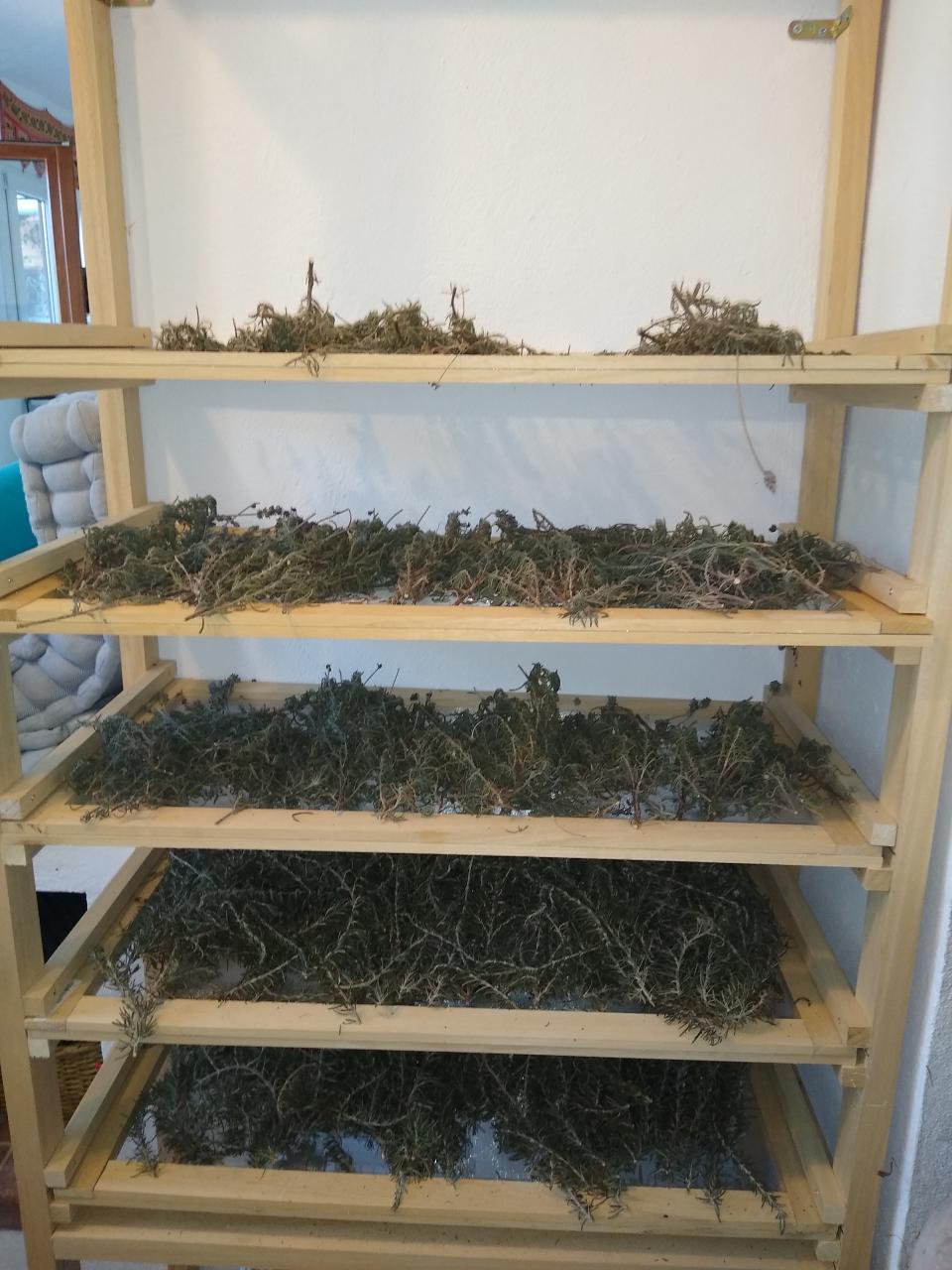 I’ve been on a mission to find the octopus in a magical octopus garden, and I did indeed find her in the garden of David Lurey. Arriving in the garden we were greeted by David and we chatted over a refreshing drink of nettle and mint tea, from the garden and dried on rack as above picture. We learned that over the past two years he and his wife Mirjam, have transformed the garden into their haven of tranquility. The garden has function, interest, beauty and most of all has benefitted from the incredible imagination and ingenuity of David and his wife.

What was immediately apparent is that this is a place in which he can get lost in for hours on end. With humour he tells us that Mirjam doesn’t worry If she hasn’t seen him for a few hours as she knows he is somewhere contained within the boundary. 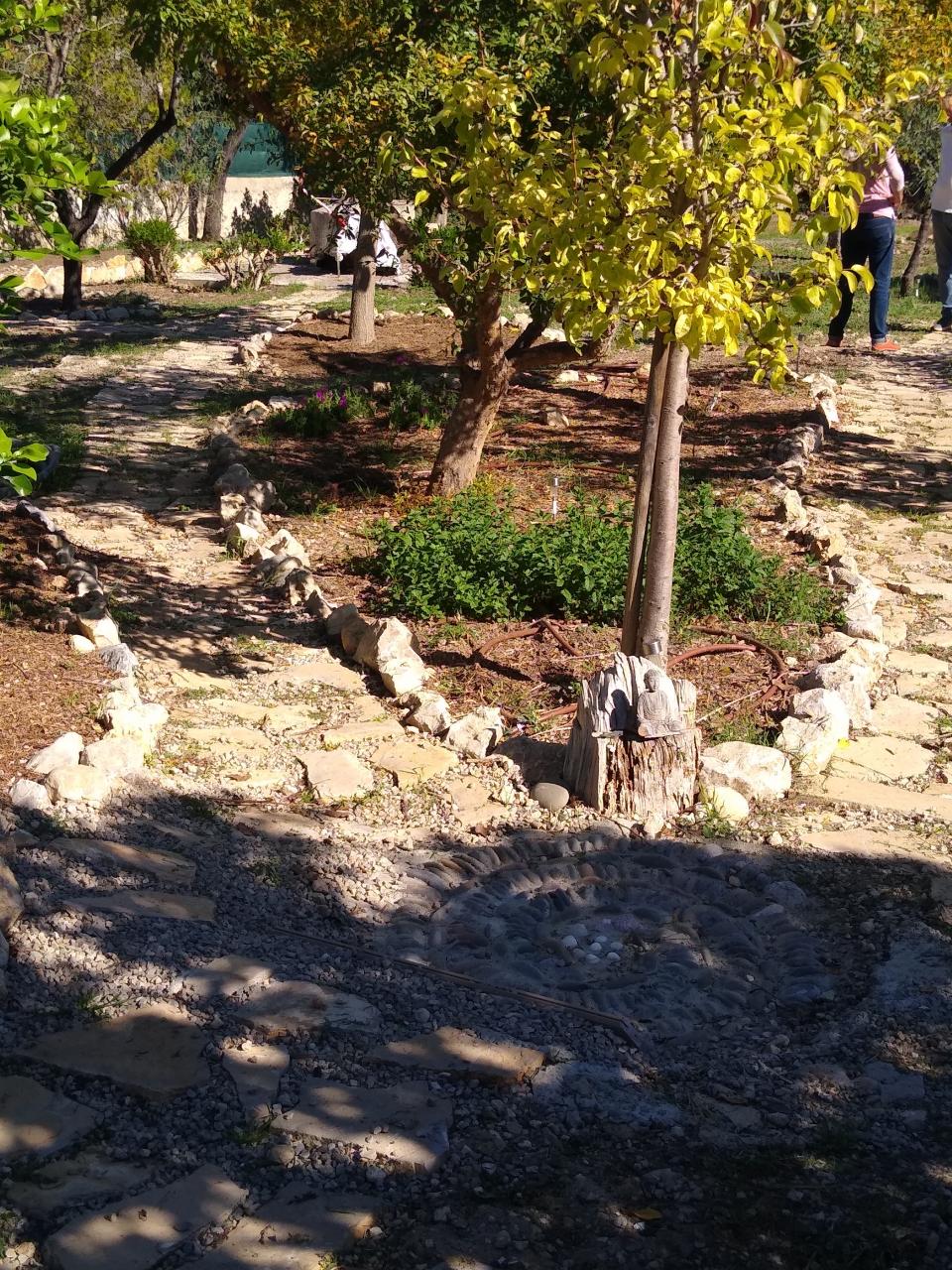 We begin our tour of this wonderful space following one of the pathways which David has designed and created. He can tell us about each and every plant and makes sure we miss nothing as we follow the paths which wind their way around and down the garden, each leading us to a new area with a beautiful and natural flow. The garden is on a slight slope and this has been taken advantage of using said imagination. Each tree has its own small terrace which collects water ensuring that this important resource doesn’t just run away to the bottom of the garden. Recognising water as a valuable resource and important natural element, David utilises gutters and drainpipes so that he catches rainfall from the roof of the property and this is stored in a water tank for irrigation at a later date. 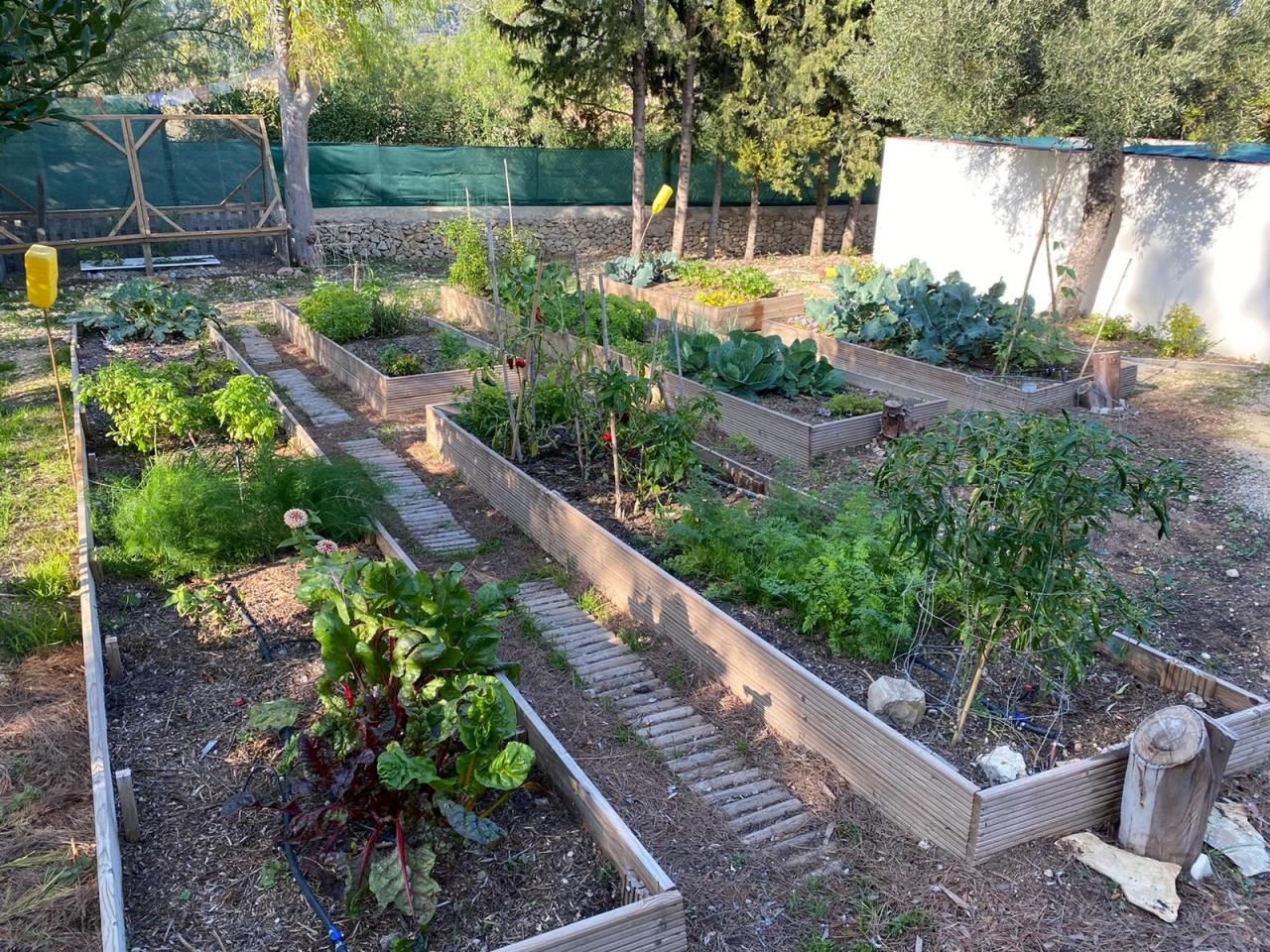 The path continues and leads us to the permaculture vegetable area. He shows us the raised beds and tells us that two of them are hugelkultur beds which will mean that in a few years when they have settled they will need less irrigation as water will be held within. Hugelkultur beds are built with wooden logs as the bottom layer which hold water as they rot down. The vegetables growing look incredibly healthy and David says that even though he does have areas of the garden that harbour snails, he is using nature’s barbed wire fence of spiky sticks which is succeeding at keeping Slugs and snails away. 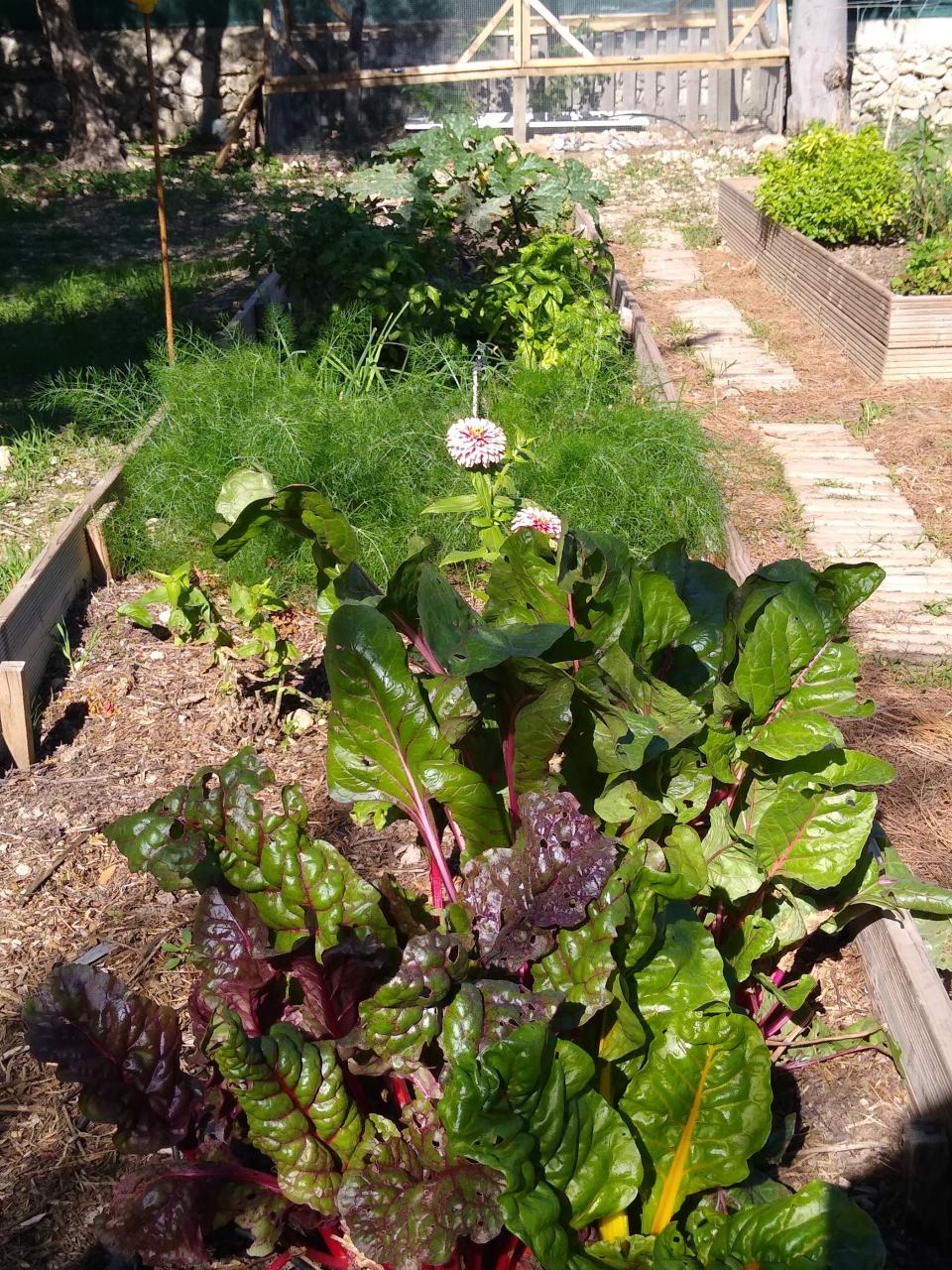 Looking past the vegetables David shows us bags of bio char (see below) which he buys in from a centre in Santa Maria and uses this to enhance the soil, increasing the absorption of nutrients by the plants. He has used this around the trees to great effect and will use this to finish off some of the raised beds. Pine needles are used as a mulch between the beds which is working really well at keeping the weeds down. The passion, care and thought that is put into this garden is seriously impressive.

Where paths meet in what David describes as almost the centre point of the garden is a swirling shape made from small stones and which depict the shapes of dancing cobras. From this circle you can take a choice of directions and we continue our tour around the edge of the large water tank where my search concluded and the most magical artistic impression of an octopus was found painted on the side of the tank.

This beautiful painting (by David Godde-Hill)over looks the rest of the garden and can be seen from the fire pit area at the lowest point of the garden from where the photograph of David was taken.

From this water tank with an outlet in the bottom corner, David has created a river run which he can turn on to irrigate the trees in this area. It’s a clever system and I agree you could spend along time watching and listening to the water run.

We walk on past fruit trees of lemon, orange, nectarine and some plum trees which are currently being grafted using almond root stock. I know about this method but have not seen it in process before. They were started by an older Mallorcan man with obviously a lifetime of experience with nothing more than a twig that he had in his mouth. Apparently he just popped the twig into place, bound it and now David can look forward to some wonderful fruits when they grow. The resulting branches are being trained into shape by tying them with strings pegged to the ground. 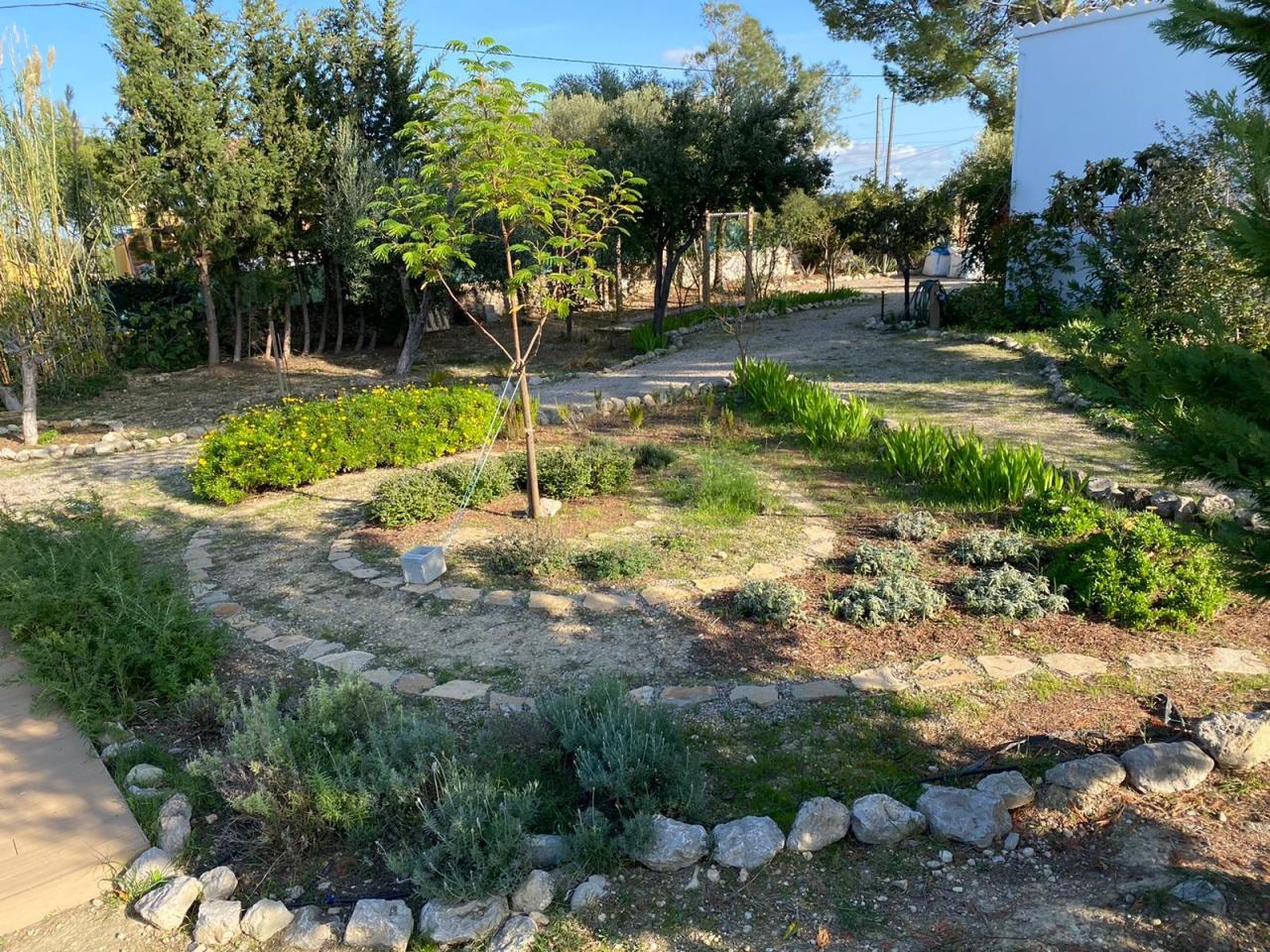 We continue and pass by an area filled with aromatic plants of jasmine, rosemary and lavender, the smells are wonderful. Continuing we stop to look at the strawberries around which David has built a cage to protect them from the birds, before continuing past an area planted with artichokes and into the fire pit area. This is a relaxing area which he and a friend built to accommodate evenings of lighting a fire to hold gatherings and a men’s circle which he runs once a week. I couldn’t imagine a more relaxing place to hold a gathering of any type and all under the watchful gaze of the Magical Octopus. The whole garden has a theme of swirling fluid shapes none more so than the lovely herb spiral which is planted with sage, thyme, lavender, two kinds of mint and rosemary. 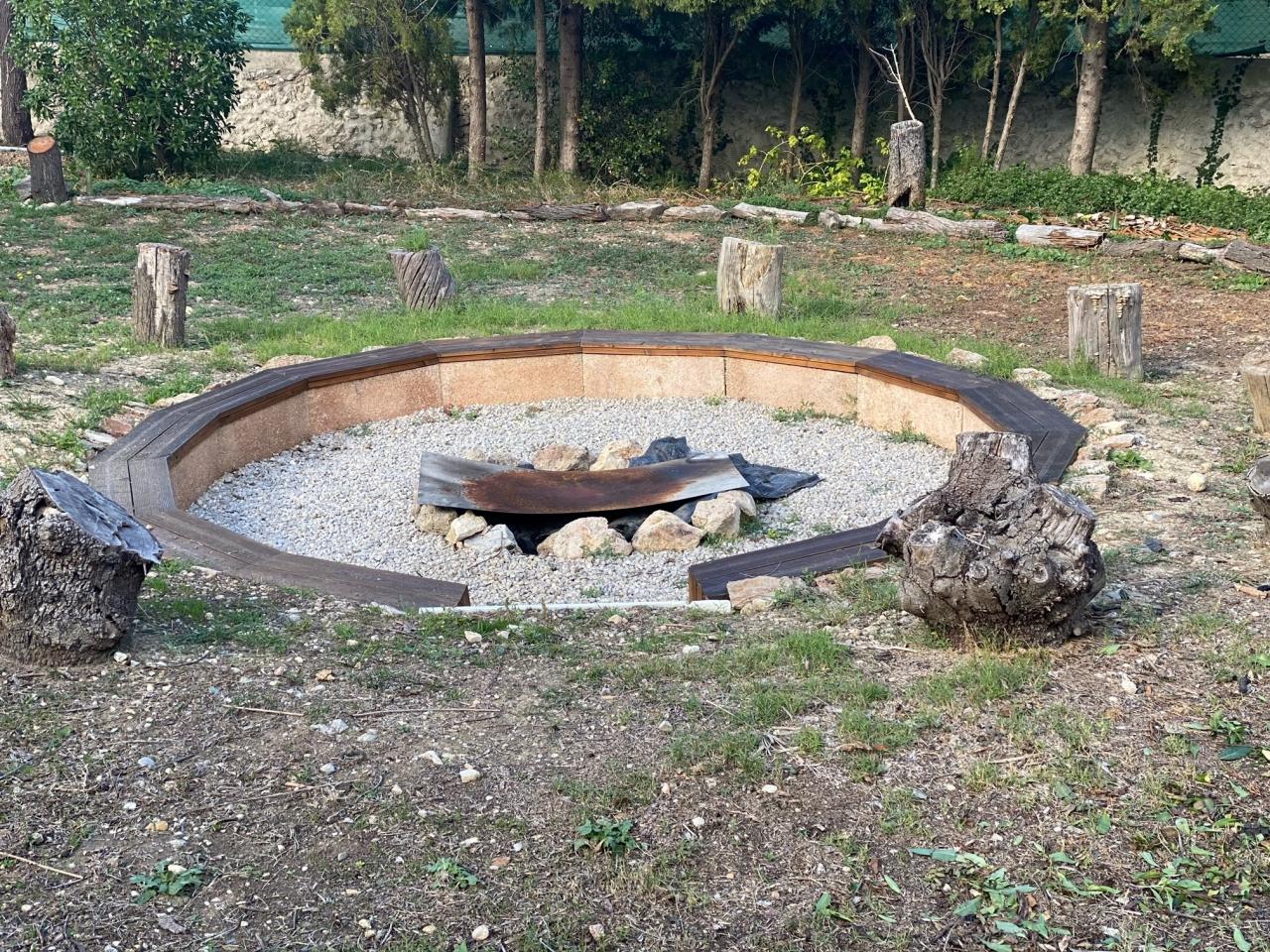 There are so many wonderful things in this garden that I can’t possibly mention each and every one but the last remaining word should go to Pac-Man. Mrs PAC-Man to be precise, as David puts it “her temperament, discernment of what she eats and ability to shred old concepts” is more feminine. 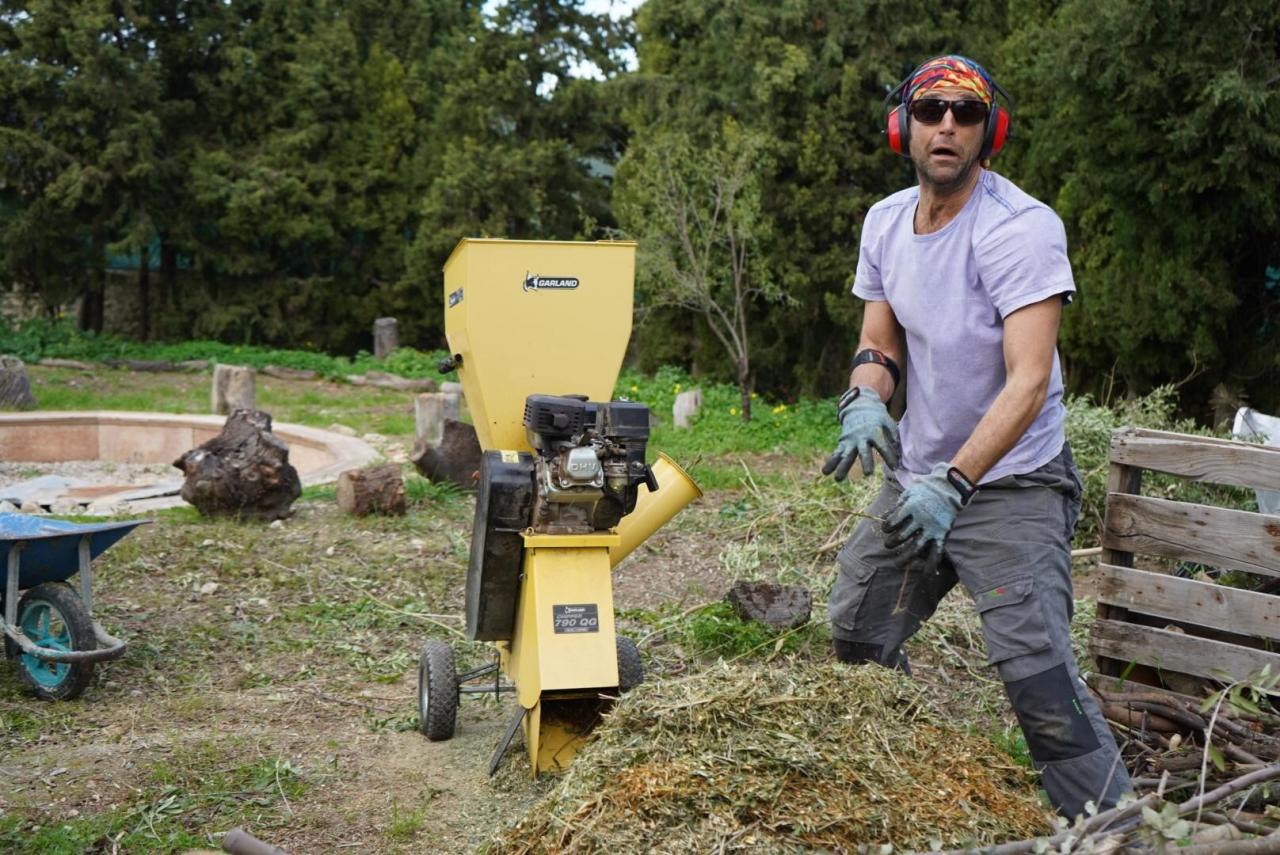 She is David’s pride and joy shredder in an area where he can happily put on some head phones and spend an hour shredding branches, twigs etc giving him the scope to return them to the ground as mulch keeping bare earth covered and helping to maintain vital properties of the ground giving back from whence it came, carbon back into the ground, not the air..not to mention giving an immense sense of satisfaction!

What Is Bio Char

**Bio char is a carbon-rich organic material which looks similar to
charcoal and is created by a system called pyrolysis which is heating biomass such as wood, manure, leaves and plants in high heat low oxygen conditions. As the material burns, unlike a conventional fire they release little to no contaminating fumes. This is then used as organic amendment material for soil with the benefit of removing heavy metal pollutants from the soil and increasing the uptake of nutrients by plants.

What an amazing space to relax in, loving this column.