All Things Bright and Beautiful 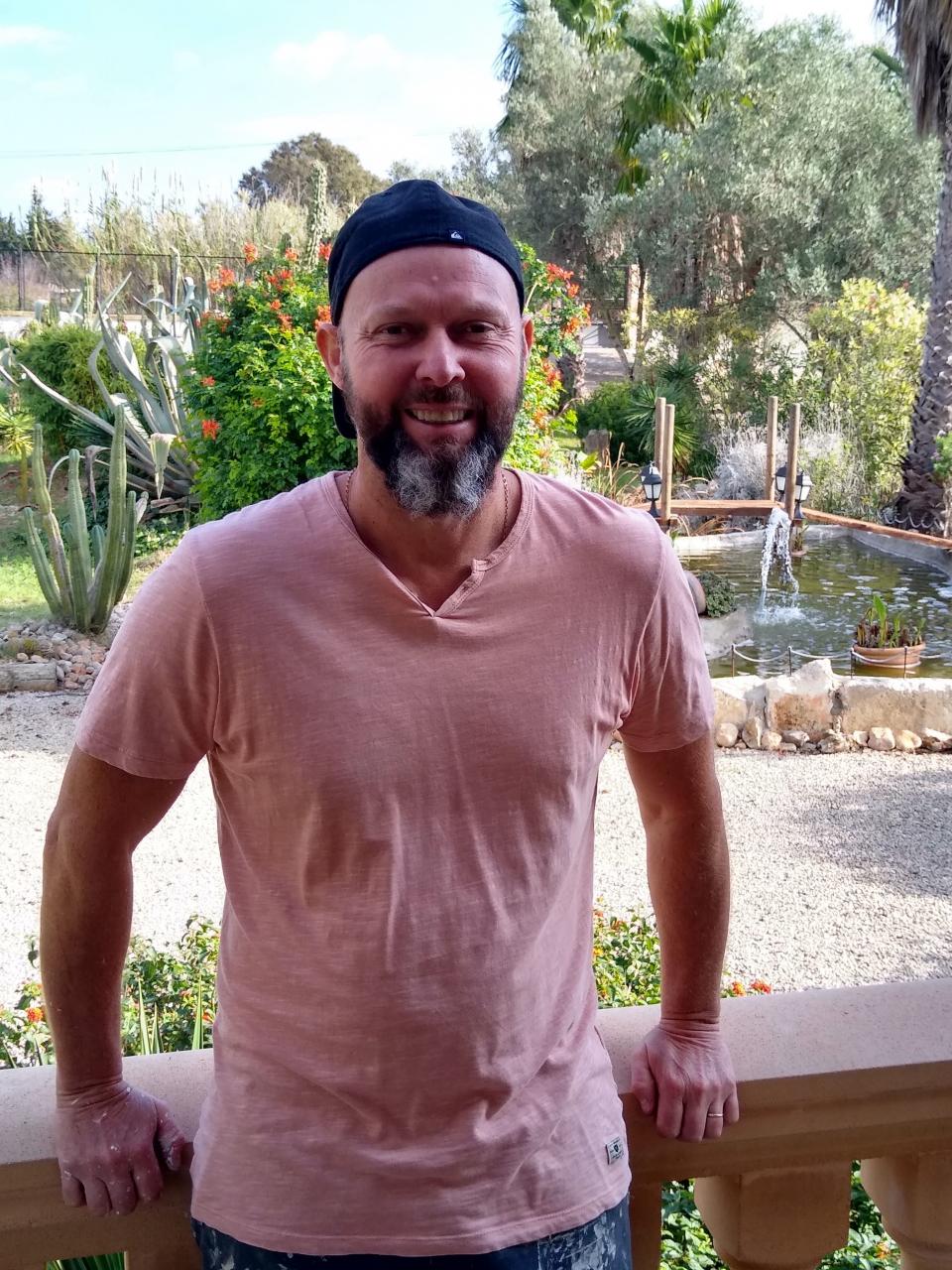 Last weekend I saw a post in Mallorca Gardeners about what to do with the caterpillars that all gardeners dread and watch out for. The Cabbage White Butterfly eggs are easily found in little orange clusters and wiped off or discarded before they quickly grow into plant munching beasties. We usually feed any we find to the chickens who munch them eagerly and so this group post, or rather the response, interested me. Why would someone offer to take these eggs and resulting caterpillars and volunteer to have them in their own garden?
Of course I needed to speak to him and so taking a ‘gift’ of caterpillars from my broccoli plants, off I went to meet up with Leon McCance. 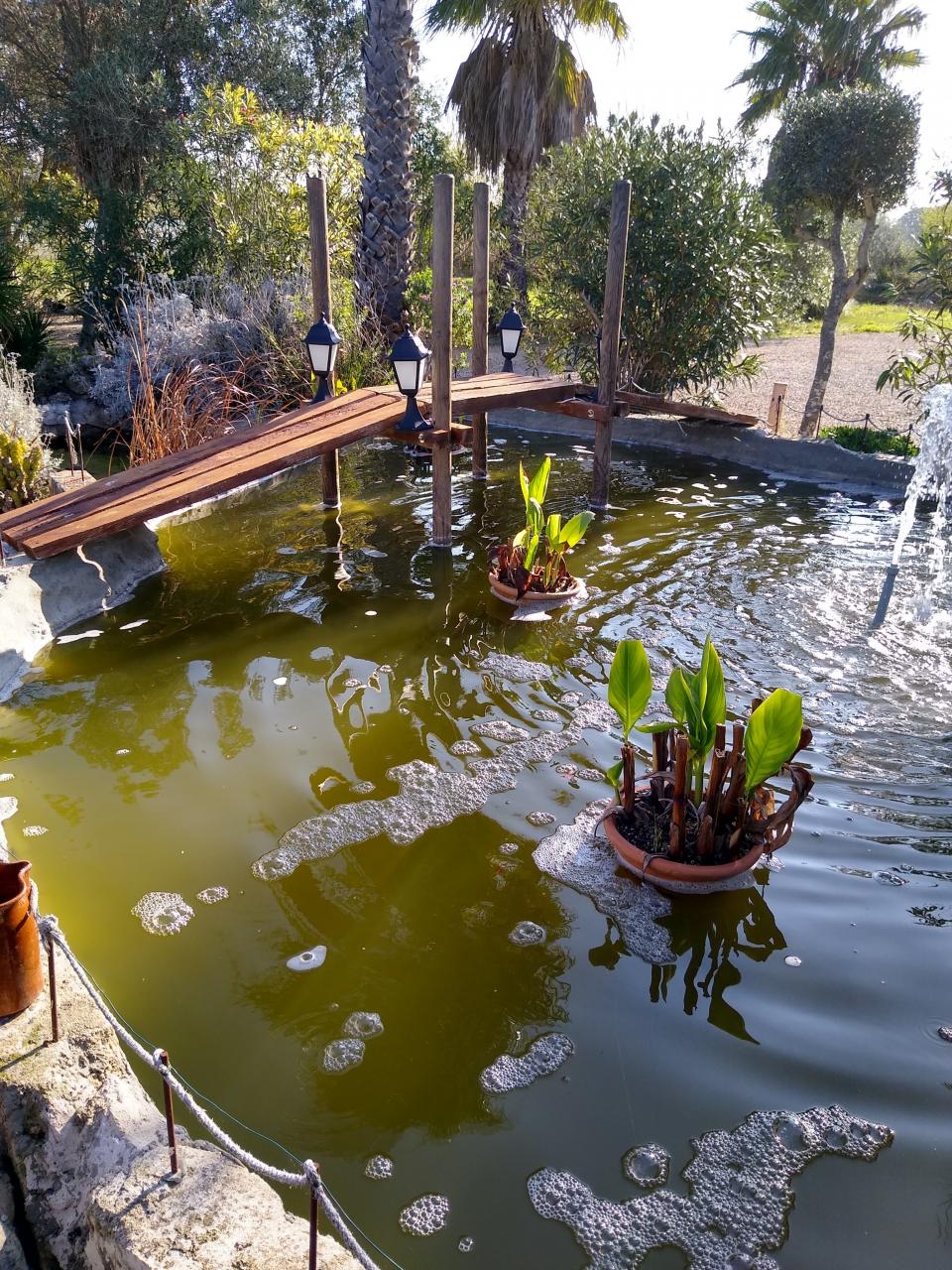 Greeted at the gate by Leon and their three dogs, who I hope will become subjects for my pet page one day, it was immediately apparent that we would not just be talking about caterpillars. Leon has built a wonderful pond complete with a bridge and fountain. His wife Hayley tells me that they do sometimes sit on the bridge listening to the nature world go to sleep on a night time and I can only imagine how relaxing that must be. I understand this pond has been a bit of a labour of love and frustration but now it’s complete it has attracted lots of wildlife; birds dipping to drink, toads and fish eating any mosquito larvae. 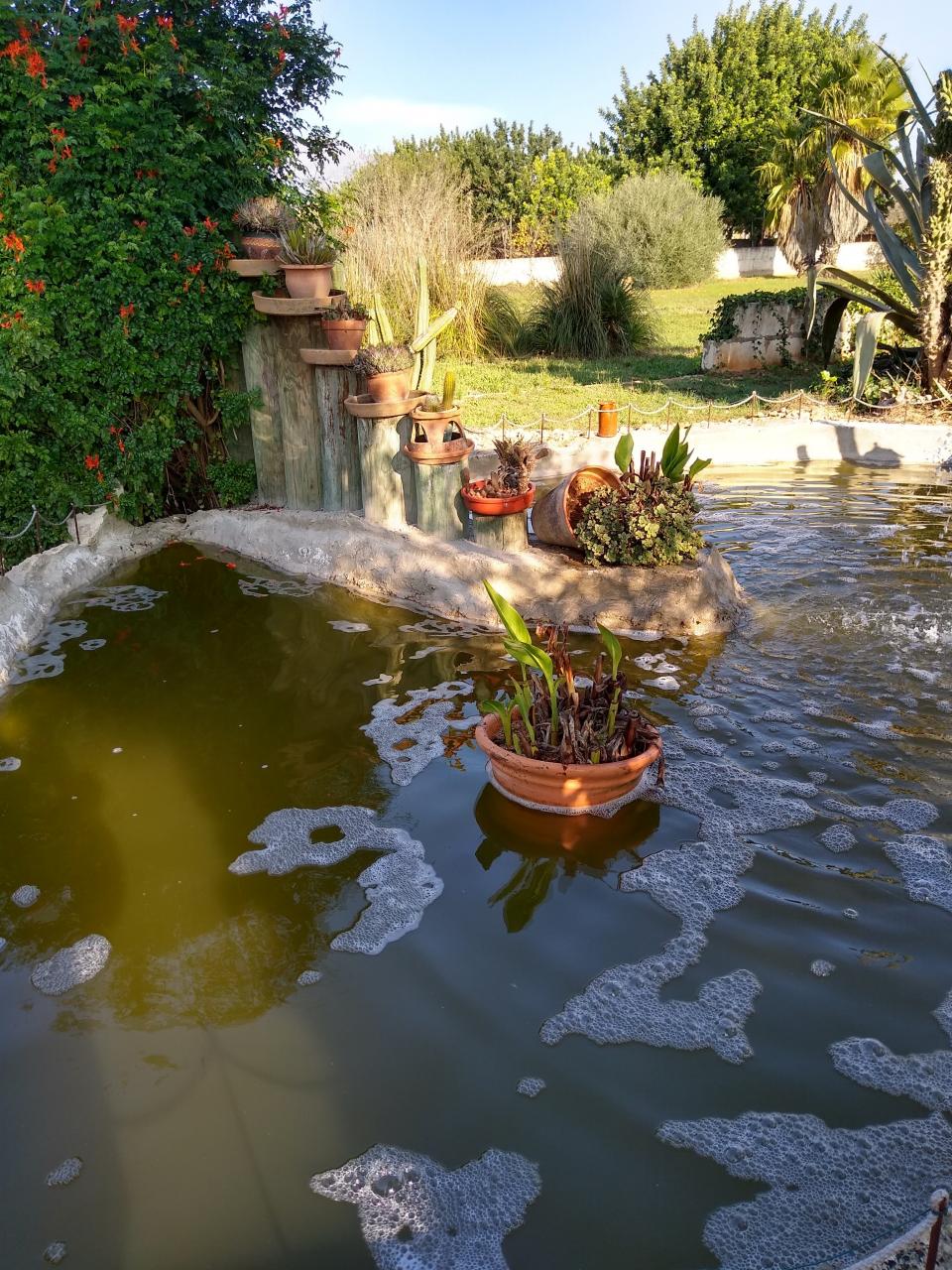 Apparently there is a heron that ‘pops by’ and plays hide and seek, waiting until Leon is not looking, hiding behind the rocks and so blending in with his surrounding. Loving nature, Leon says he doesn’t mind the heron having a few fish, they have to eat after all. But he doesn’t want the pond emptied... this is why he is quite happy for the pond to be a bit greener so the heron can’t see them as well.

There are two ponds, the large pond which is largely ornamental and the smaller pond which is dedicated to nature and has larvae of dragonfly and other species in it. Leon says he has even seen a kingfisher flying in the garden. After a quick check for a protected species of toad that hide under the rocks which surround the pond, we move on to the original purpose of our visit. The family like to encourage as many different species of insects and butterfly as they can to the garden and thus have plants such as lantana and fennel which attract them. Leon made the birds a bird box out of a wine box so they have a place too. 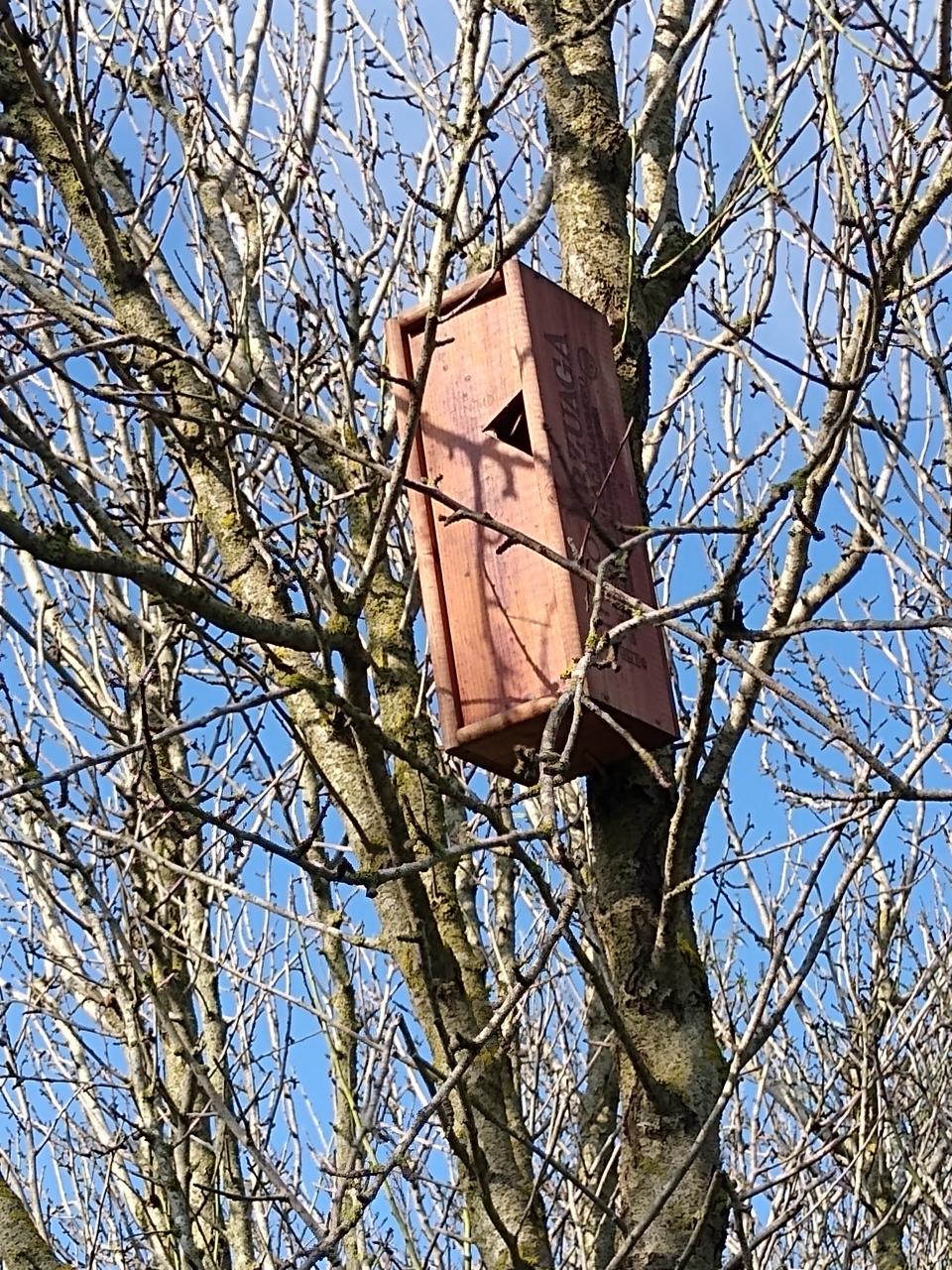 Hayley tells me that as others buy cabbage plants to grow and eat, Leon buys them to encourage nature. I listen as Leon imparts his knowledge of preservation of a species and I admit to feeling a little bit guilty for all the times I have swiped cabbage white butterfly eggs off my plants. As we walk I learn from Leon that Majorca is home to a few different species of butterfly, six of which he has seen in his garden. Swallowtail, Small White, Large White and Marble White (which is becoming extinct in England), Clouded Yellows, Small Coppers and Small Blues. 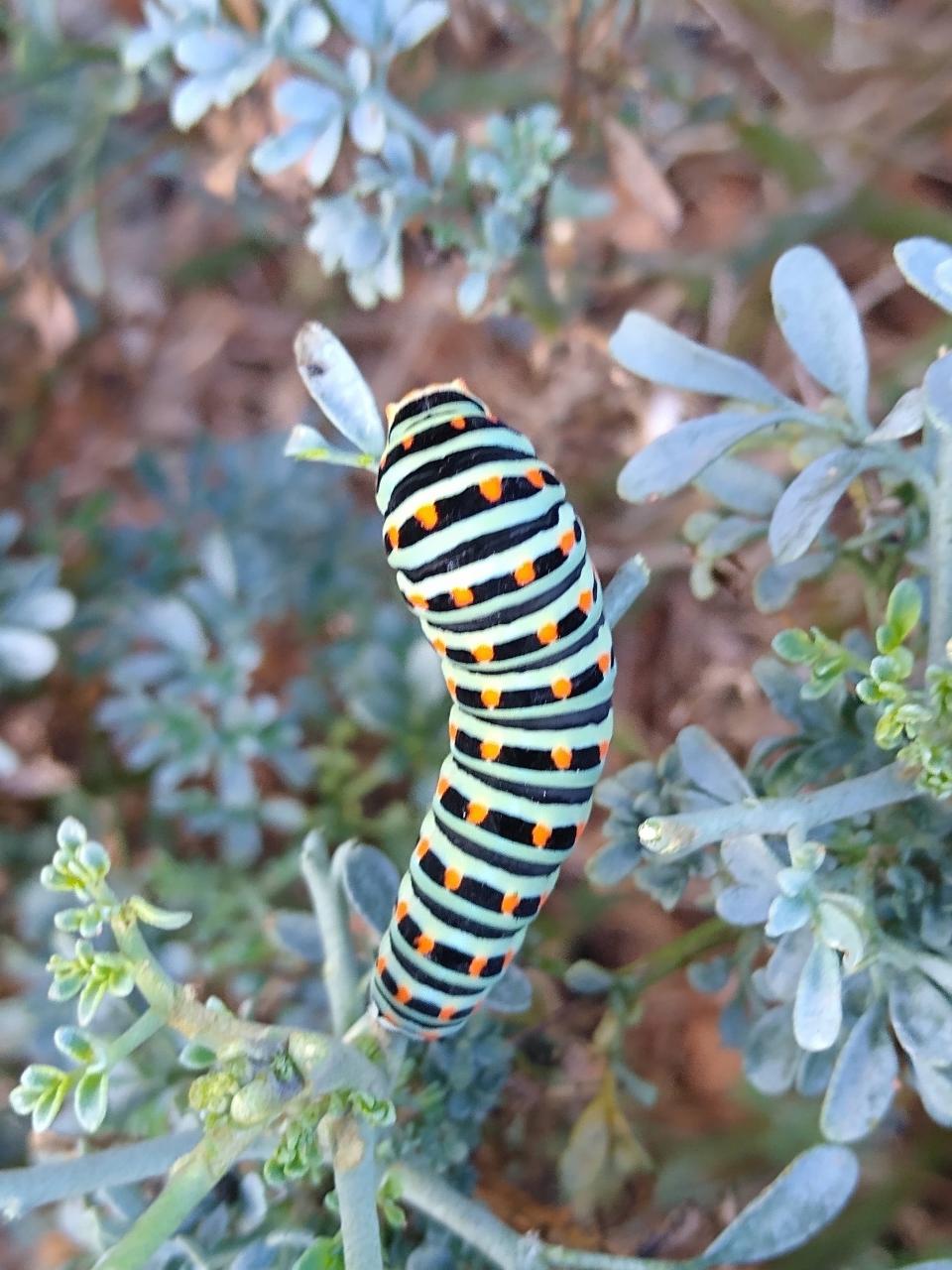 We find a swallowtail caterpillar obliging by posing on a Rue plant which they like and she is quite a beauty. We pass another small pond. Leon hopes the toads will find this pond too, he tells me how important ponds are to the wildlife. Birds drink out of it, insects spawn in it and he doesn’t even mind mosquitos because they fly into the air and provide food for swifts and bats. 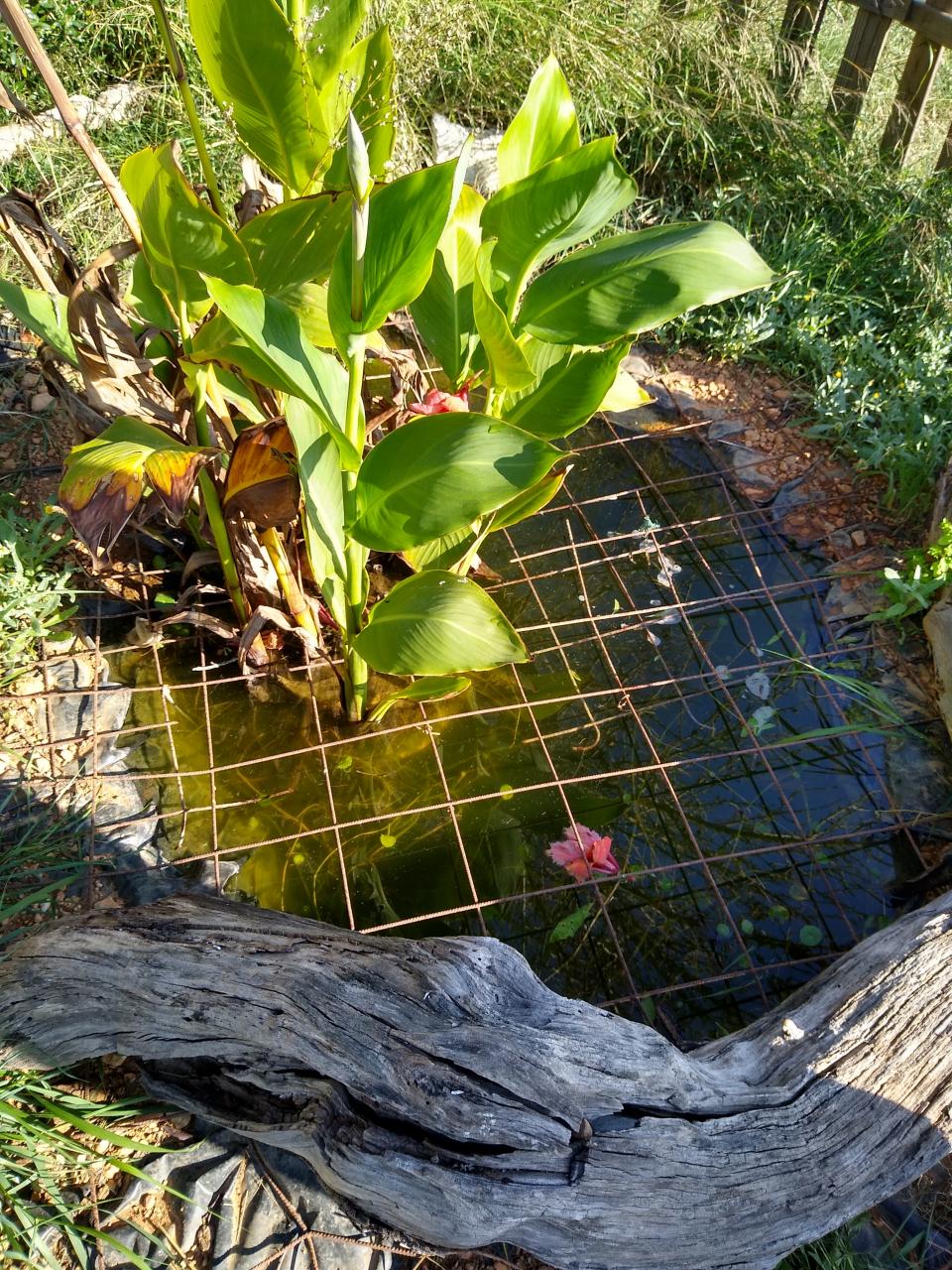 This garden is a brilliant example of the cycle of nature and food chain. Even bindweed has a place in this garden for the hawkmoths. What is not welcome here are ants and wasps both of which are predators of the caterpillars. The wasp lays eggs in the caterpillers and eventually that kills them when they emerge from within the body of the caterpillar. Despite best efforts to protect them the wasps were still able to get to the caterpillers and kill them so now he collects the caterpillars, buys cabbage to feed them and they are kept by his daughters in their bedroom and ‘raised’ until being released as butterflys in the spring. 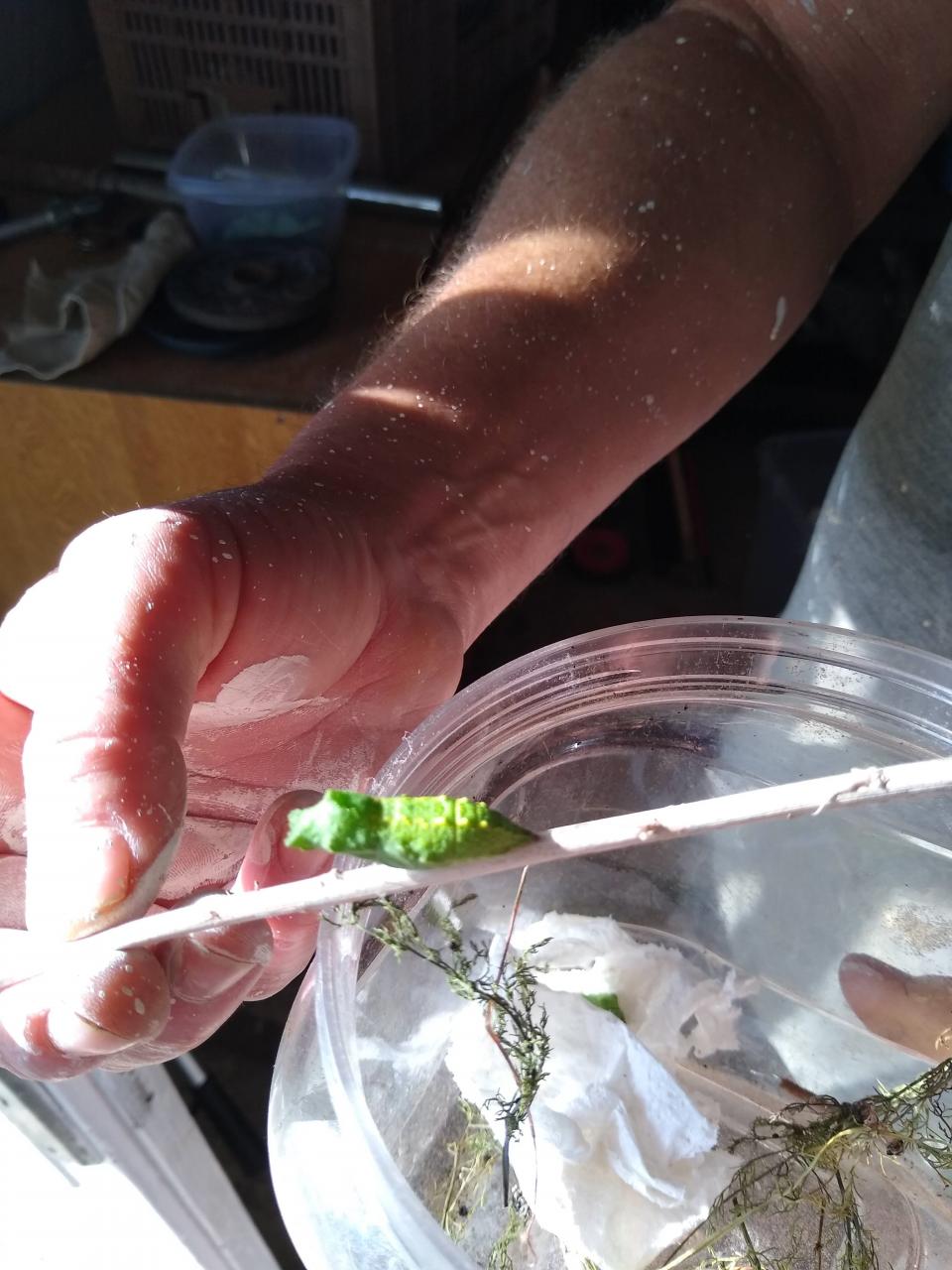 Looking at another bright object Leon shows me a Swallowtail crysalis who is safe and sound in a plastic jar with breatheable lid in a cool dark area. She will remain here over winter until the butterfly emerges in the spring. Leon tells me he likes to save a few of the species each year and the rest he will leave to nature. A large part of the garden is left to nature to thrive and become habitat for butterflys, bees and bugs which are vital to healthy eco systems and life!. As for our caterpillars we gave to the family? These are from the Large White butterfly and they will be looked after by Leon and Hayley’s two daughters in their bedroom and released when they emerge to look for the cabbages that Leon will plant for them and thus the cycle of life starts again.

Just a few reasons Why Butterflys are Important 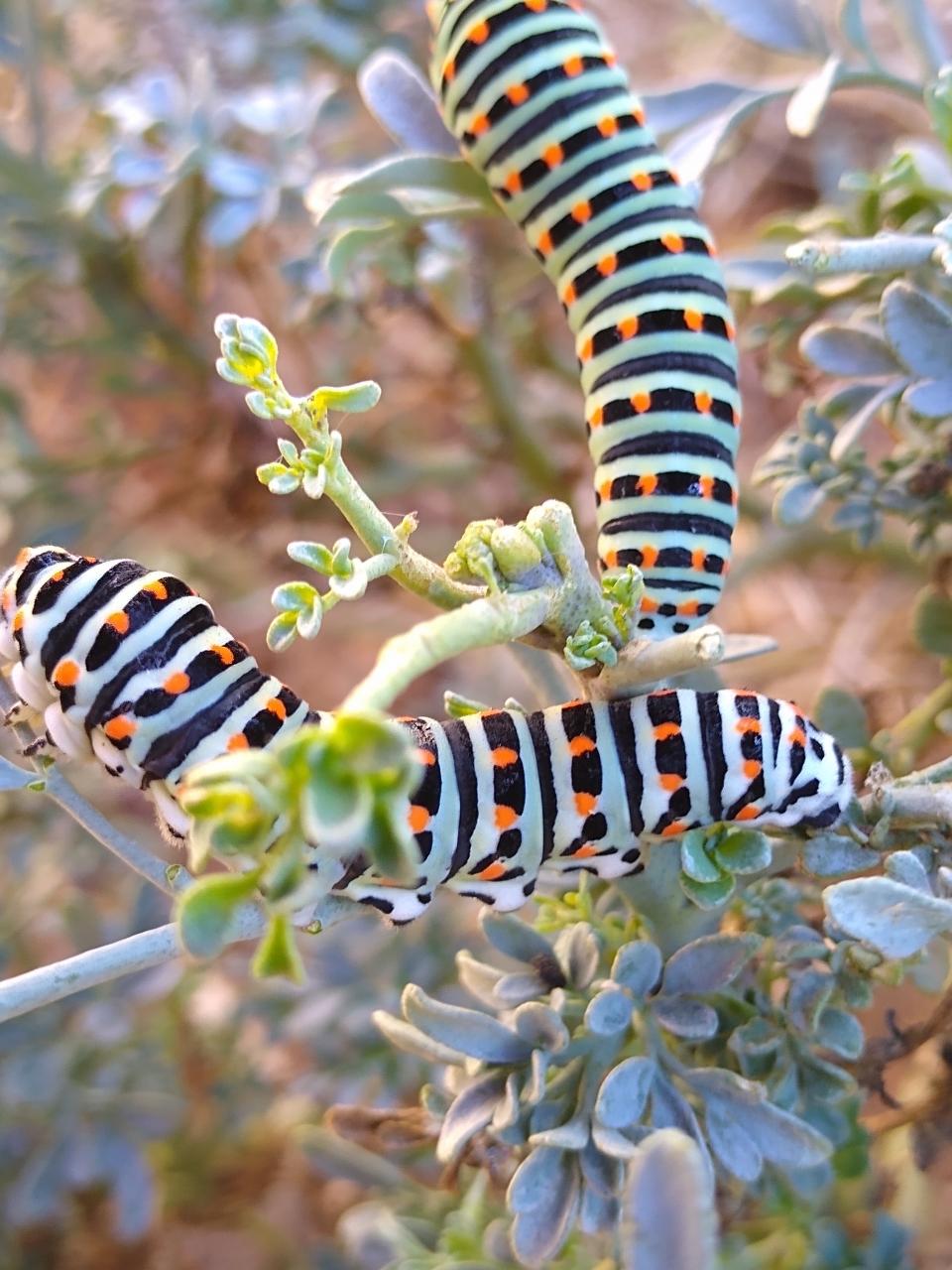 Butterflys are recognised as an indicator of biodiversity. Being so fragile they will struggle to survive in a hostile environment such as over pollution. They are an important part of food chain too with birds and bats feeding off them.
From an Aesthetic point of view butterflys add colour and fragility to our world and people value them to look at. Their life cycle is fascinating and a useful teaching tool to children. The metamorphasis from caterpillar to butterfly is a wonder of nature.
They may have economic value to humans, their chemical excretions have potential value to exploitation.