See how honey is extracted.

Arriving at Mel Vici in Alaro recently, I was greeted by the most wonderful smell of newly harvested honey. 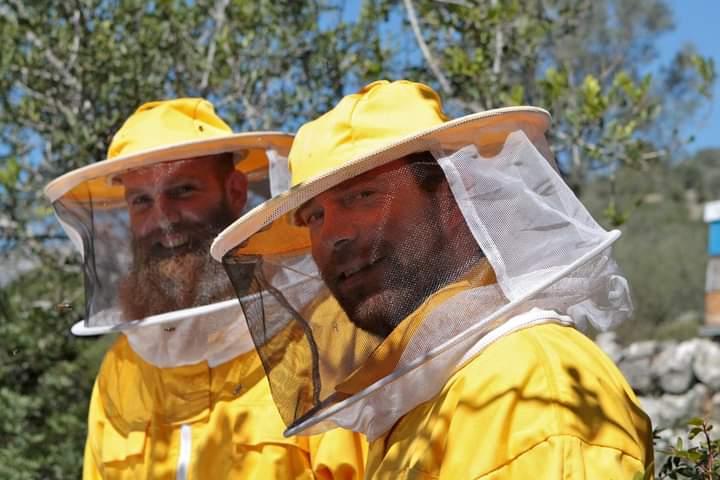 Started by childhood friends Biel Coll and Pau Queralt this is a business that came about because the friends wanted to work outside and didn't see themselves as cheesemakers! Loving the countryside and wanting the population of bees to grow, it seemed an obvious choice to enter the world of beekeeping and making honey. 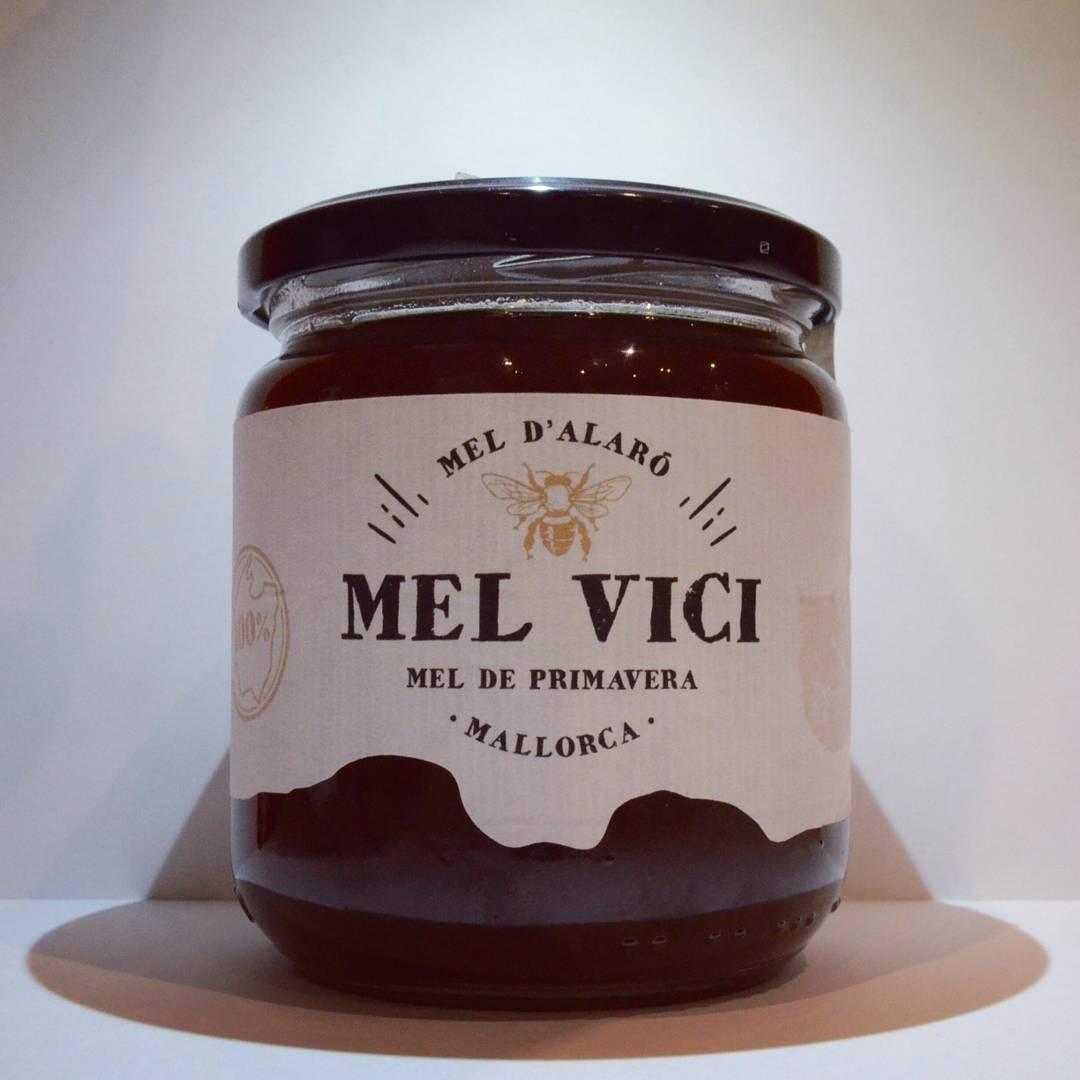 This artisan business was built from the ground up with no experience and very few other beekeepers on the island to learn from. Nevertheless with their dedication and commitment to produce the finest honey Mel Vici has become an ever expanding enterprise. 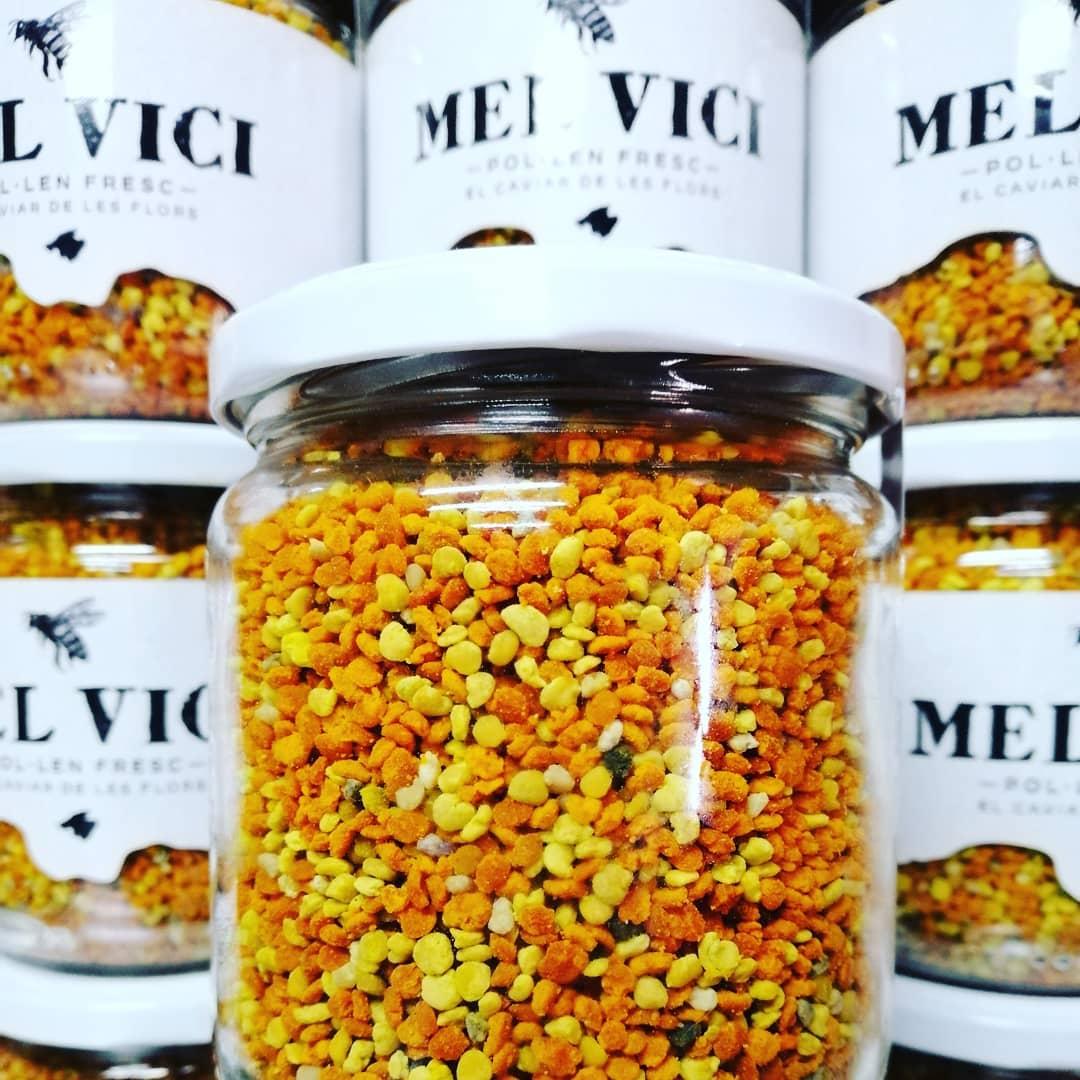 Mel Vici don’t only produce organic Majorcan honey, they also produce fresh pollen. I had no idea that this was collected directly from the bees after their foraging trips and was fascinated to learn how simple it is to collect. 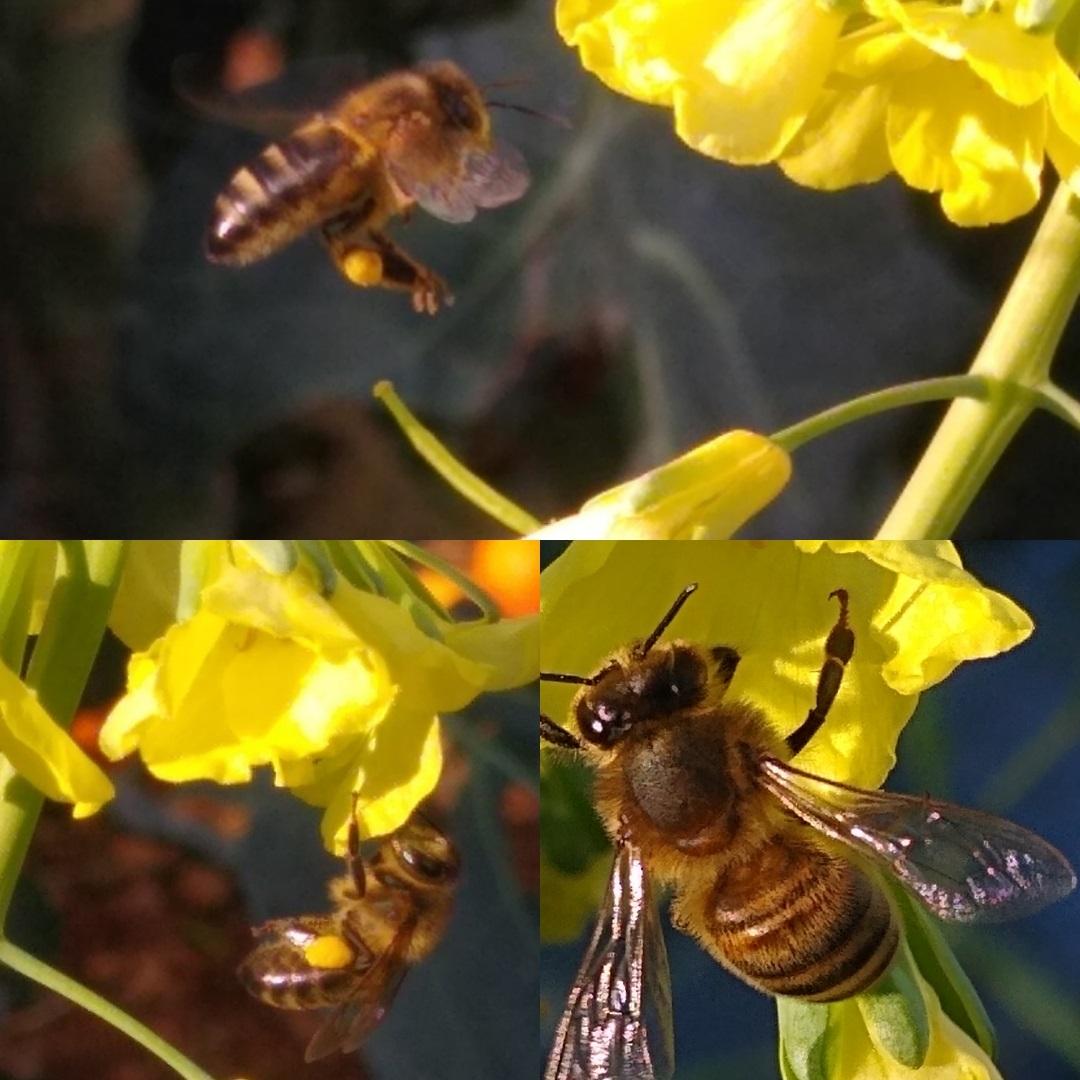 The bee when she is flying from flower to flower and happily covering herself in pollen will then push it down her body collecting it into little balls on her legs. Apparently, and only when the bees have plenty of food to eat, they are encouraged to fly through a collecting box, which has a fine grid in it, that knocks the pollen balls from their legs as they return to their hives. 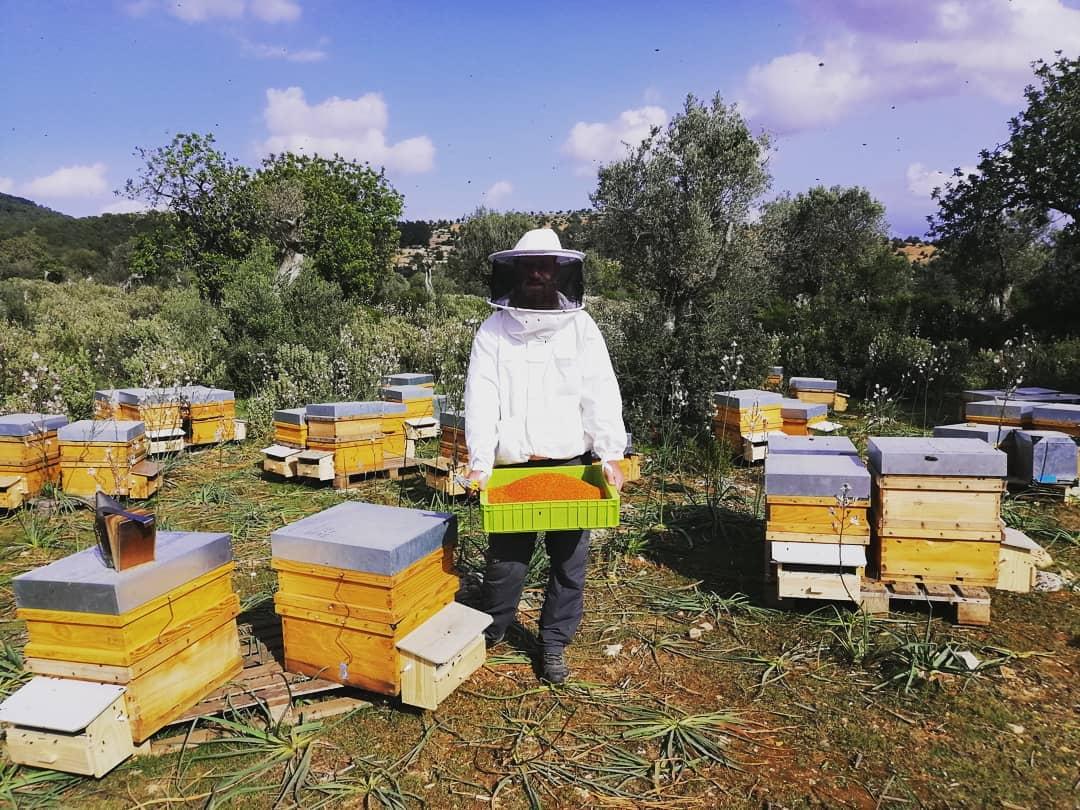 These are then collected in a tray beneath. Mel Vici sell this as a fresh product but you will often see it as a dried product in jars. I’m told that bee pollen has all the essential amino acids that our bodies need for optimal health. Another product which is made is propolis. This is a substance which bees actually use as a defence to block holes, like a glue. We use it as it is beneficial for its antiseptic and antibacterial properties and often used for sore throat remedies among other things. 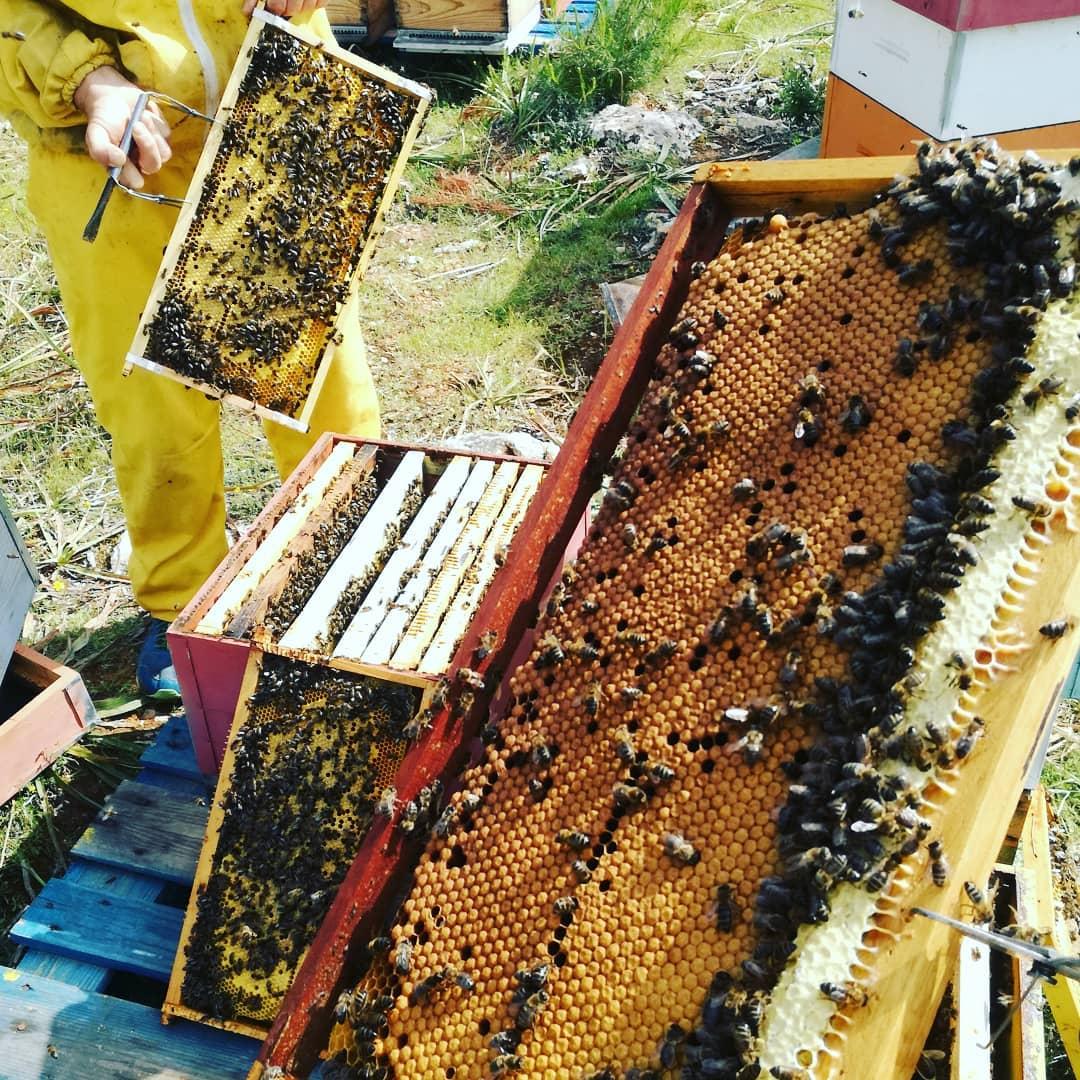 The wax from the hives is used for things like furniture polish and face creams, so it seems very little is wasted from a hive.

Mel Vici came to fruition about 6 years ago and whereas in the beginning they would collect rogue colonies gathered in peoples gardens and other unwanted places they are now breeding their own queens and colonies and also sell their bees to others on the island and also Minorca. In breeding their own queens they are able to ensure a healthy and productive colony of bees which produce the best quality honey.
The smell of the honey as we arrived had deep caramel aromas and this is due to the Autumn harvest being from bees collecting from the Carob trees. 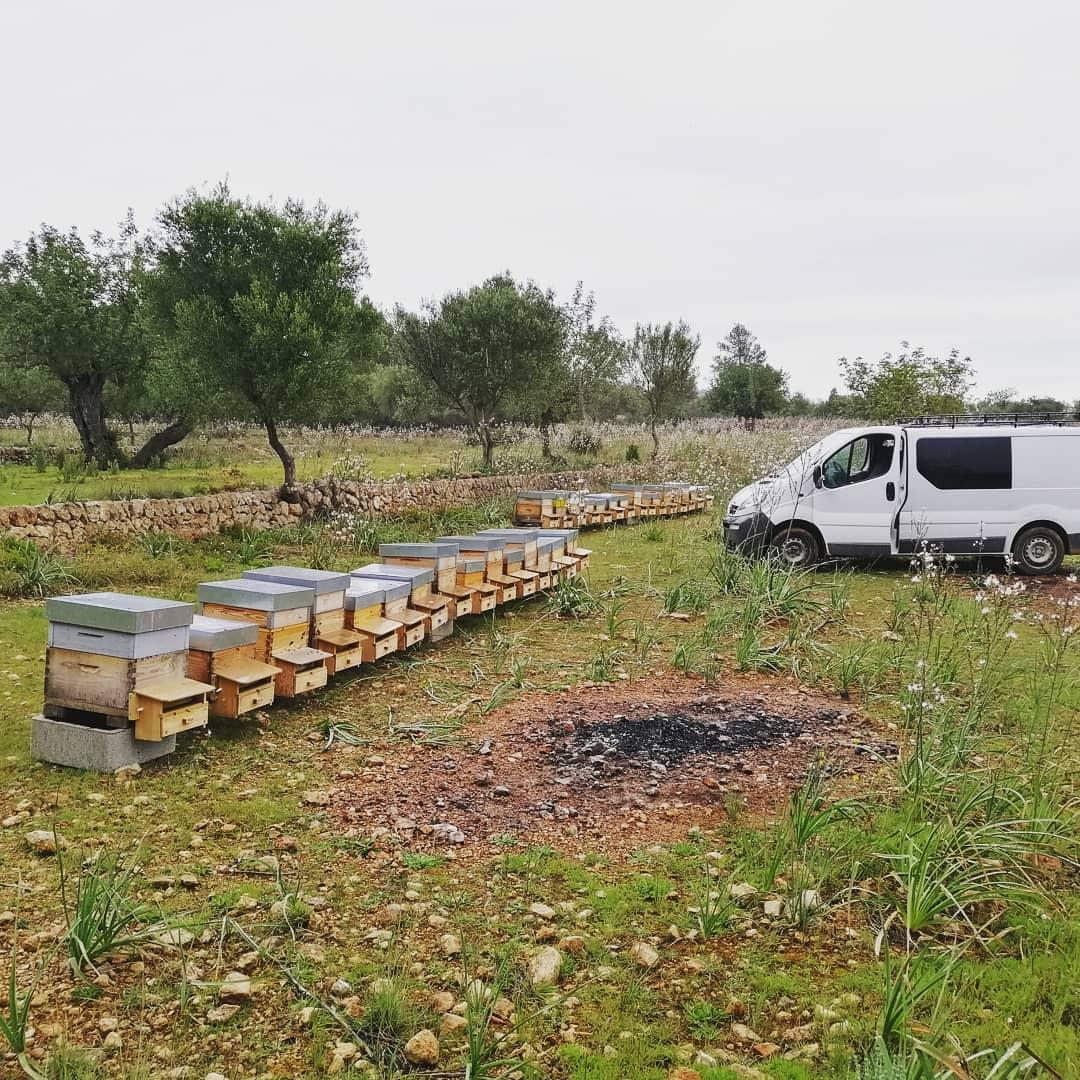 There are two honey harvests in the year and I'm told that the spring harvest has a lighter colour and smell from the spring flowers. Mel Vici are very keen that honey labelled Majorcan honey is just that, and they tell me that once the honey from their harvests are sold, there is no more produced until the next harvest. Luckily for we consumers, Mel Vici continue to expand their hives and currently have around 600 hives with approximately 60,000 bees in each. 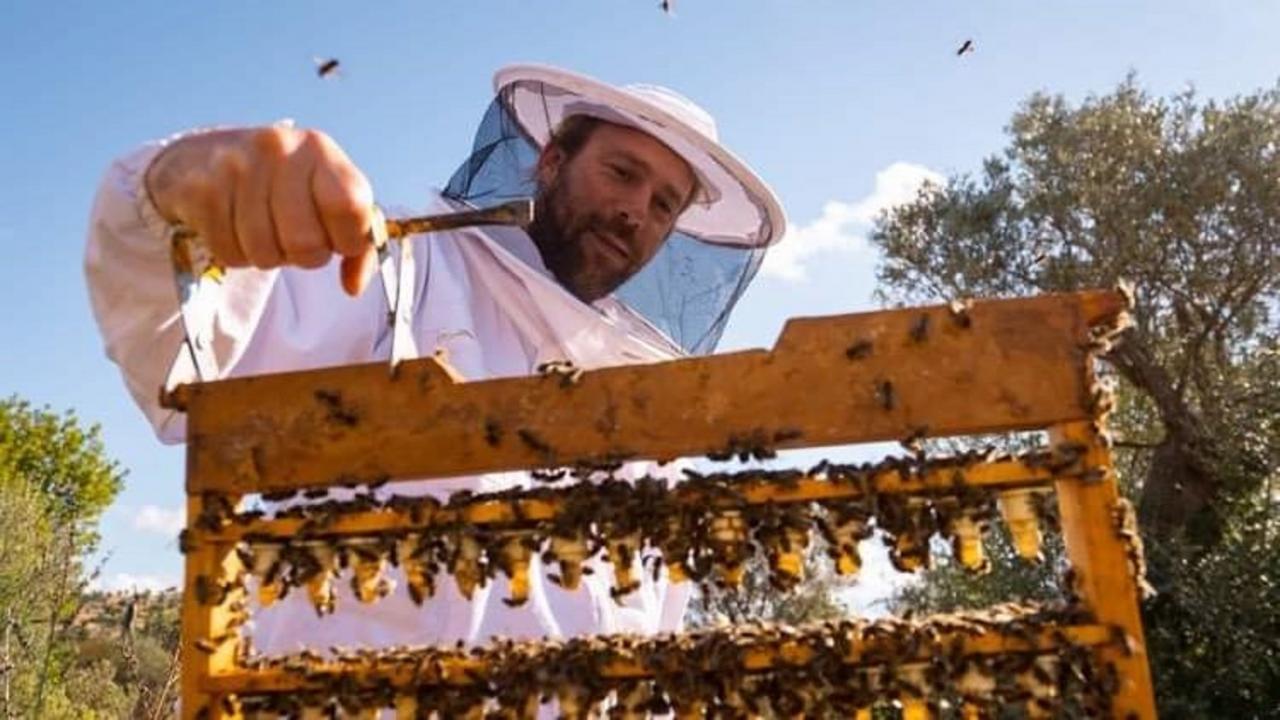 Each hive holds a queen bee, female worker bees and, when there is an abundance of food in spring, some males. At this time in nature bees will decide they need to have more worker bees so that they can collect more pollen. The queen is the only one who decides whether a bee will be male or female. When the hive is over full with new bees the queen will leave and half of the hive will follow her, she finds a new hive and makes new worker bees. The remaining half will create a new queen and in winter when there is not as much food about they will kill off the males as their only job is to fertilise the queens eggs and eat! In this way colonies are able to reproduce and grow inside and this is what Biel and Pau are recreating to keep their colonies growing and Majorcan bees in optimal health. 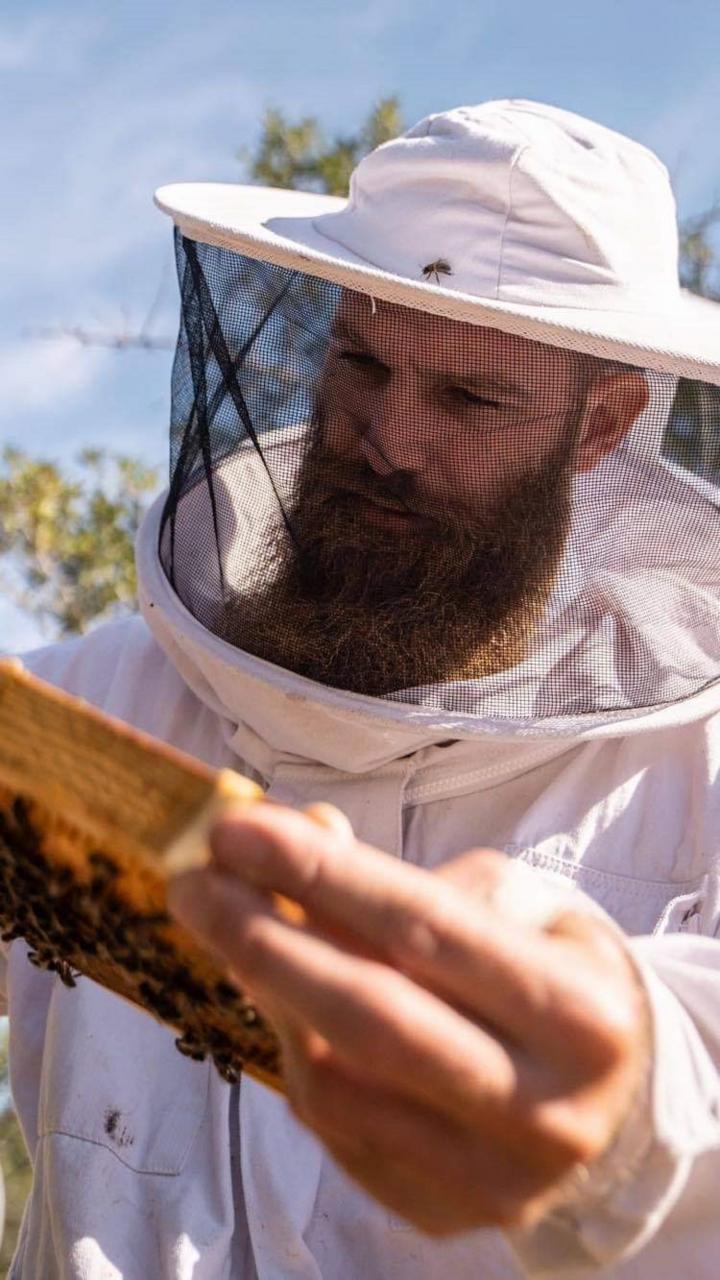 Their 600 hives produce around one and a half tonnes of honey at each harvest. This sounds to be an awful lot but Biel points out that it is no where near enough to feed the whole island. There is much honey that is imported to the island from elsewhere but this is not something that Biel or Pau wish to explore and thus Mel Vici honey is quite exclusive.
We were lucky enough on our visit to sample some of the honey we saw being harvested. 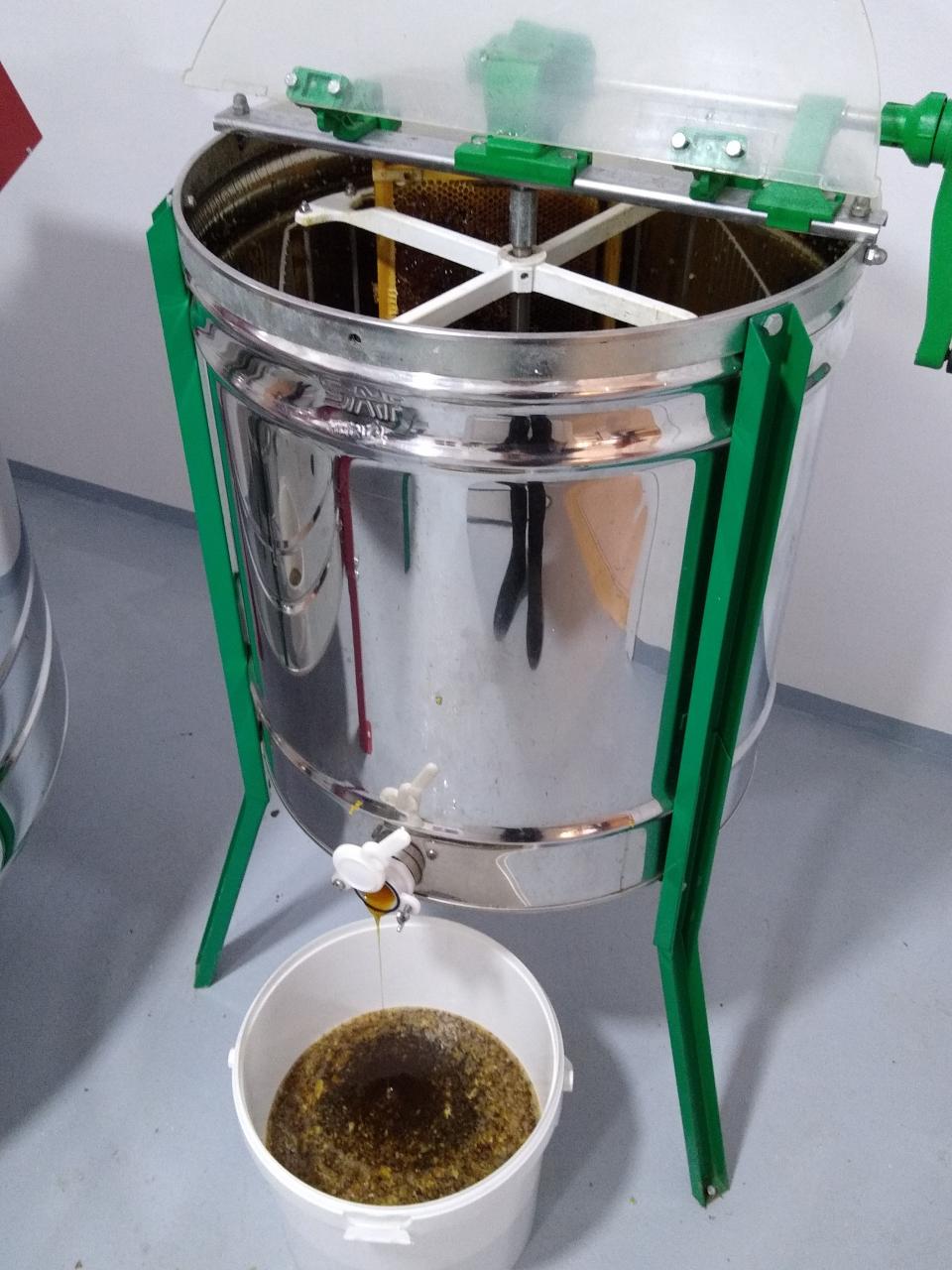 The work is nearly all done by hand but they were very proud to show me their new electric centrifugal machine (see video) in which they can stack 4 times as many trays of honeycomb than the hand version which they still use for smaller customer harvests.
On the side of each of their jars it tells you that it takes 1,152 bees that have travelled 180,246 kilometres and visited 4.5 million flowers to make one 450g jar of honey. There is no wonder they are called worker bees!
Mel Vici have now developed a business plan enabling customers to have their own honey with bees sourced from them. For a monthly fee they will then maintain the hives and harvest and jar the honey, all of which is returned to you. Some of this honey was being collected at the time of our visit and is still very much done by hand and completely natural. A great way to have your own beautiful honey. 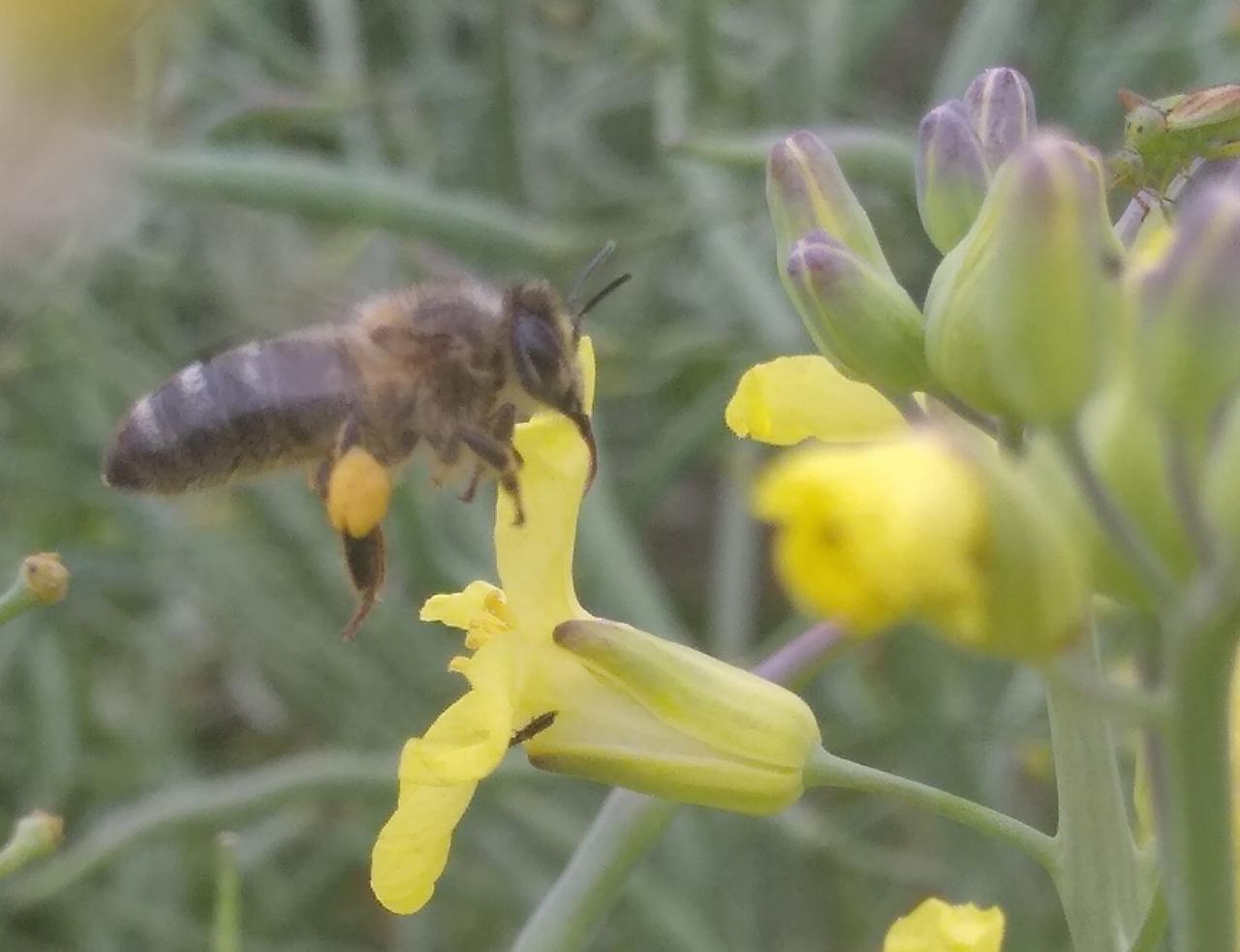 As a gardener I was interested to know if my efforts to encourage bees into the garden are helpful and was pleased to know that my leaving brassicas like broccoli to flower is helpful. The bees also really love flowers such as rosemary, lavender, cucumber, melon and courgette. So I hope all gardeners join me in continuing to plant a variety of things to encourage the bees. We need them! Thank you Biel and Pau! If you'd like to find out more or see who stocks the honey Biel and Pau can be reached via their Facebook page Mel Vici d'Alaró

Really wonderful article by this columnist, bees are such an important aspect to a healthy ecosystem, we all need to do what we can to help them and in return we get honey! #getabeehive