THE end of year analysis is always fascinating. For me and the group of people I got to know on arrival here twenty years ago the analysis has a twenty-year tinge to it.
Children were born and are now old enough to have left home for universities all over Europe. The ideas and ambitions of the year 2000 have either been realised or discarded. A reminiscence edition has to include those who joined us for a spell and then left for another adventure.

We remember their names and laugh about shared experiences and then we move on. In effect that’s what they did to us – they moved on too. In an Ex Pat world, we live in the ‘moment’. I am not getting all new age on you but it is a fact that the Ex Pats are generally only interested in you when they meet you or see you. Out of sight, out of mind takes over thereafter. It is a real challenge for anyone involved in communities or charities who try to change that mind set.

This was very evident when we tried to set up a version of the Samaritans on the island for English speakers.
Many well intentioned people trained, got involved and manned the helplines. They spoke to many who were depressed and challenging all the reasons they had left their previous life to come to Majorca.

Running away, starting a new life, reinventing themselves was a common thread.
Of course we all know that never works as when you relocate you take yourself and all previous experiences with you. You can live a double life for awhile and then the real you pops up again with all the good and bad of the past.

The Majorca Samaritans learnt so much about this community but mostly they learned about themselves.

Then there were the showmen, the stars who kept us going for years. The Bay Entertainers, Centre Stage, The Georgie Insull Singers all gave their talents and good humour and shared it like magic dust. This influential crowd involved others and many young people in all their performances and productions.

The past twenty years was their hey day of all this creativity and fun. Martin and Graham of Centre Stage will still make us laugh as we reminisce about the Panto’s and reviews. We miss them both so very much. When The Bays met the Georgie Insull singers the result was magic. Who will ever forget Martin and Georgie singing ‘Baby its cold outside’?
The Christmas world of people bobbing up and down to the ‘12 days of Christmas’ is etched on the memories of thousands on this island. 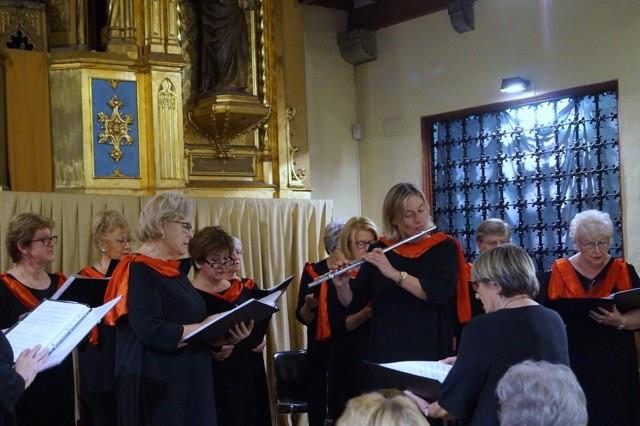 The kids who were part of Centre Stage productions with Conway and Robert had the best time. Performances twice a year on stage at the Auditorium and friendships made forever. To be part of the Centre Stage family was precious and so many who couldn’t afford the fees were just welcome. Conway plays the organ at the Anglican Church and often has very grown up young people popping by to say hello. They have such great memories of the teenage theatre world of Centre Stage.

In 2020 there are theatre groups, choirs and friendships being made every day. It is a new era with many incomers arriving at the beginning of each year. Every group bring with them those who will make a difference to the community and the people they find themselves amongst. To move from the superficial ‘hello when I see you’ to sharing a common interest is fantastic. Whatever you get involved in Majorca means at least 2 nights a week commitment.

For Georgie’s girls in the choir we sang at weddings and at Christmas concerts all over the island. We saw more of each other at that time than our families.

The same for all the rehearsals with Centre Stage and the Bay Entertainers, they became the tribes. Our families got sucked in and supported all we did. There was a celebration of life, music, theatre and friendship which gave us a great grounding for all the life in Majorca on offer.

The halcyon days for us continue twenty years on and our smile of welcome to new people to the island is wide.
This is a beautiful island full of ‘Humans of Majorca’ who have settled here or who visit often. This place is our shared secret. Happy New Year to you all.