Lentils, like all pulses, are veritable powerhouses of nutrition, yet so many people I know never eat them, even in restaurants. This is a pity because lentils are not only good for us, they are extremely tasty — and are one of the most economical buys at supermarkets.

Of all the legumes, lentils have the highest protein content. A 100 grs portion contains more protein (25 gr) than beef (18.5 grs) or fish (16.5 grs). The protein in lentils isn’t a complete one (it lacks certain amino acids) but it can be made so by serving them with brown rice or brown bread.

Palma’s supermarkets and specialist shops sell various kinds of lentils including the French Le Puy variety, the favourite of most creative cooks. But Le Puy is much more expensive than any of the more common varieties.
Most supermarkets stock the Spanish variety called parda or pardina, a word that means brownish-grey because that is the colour of this lentil.
You will also sometimes see a lentil with a speckled olive green colour called depruyensis. It is smaller than most of the other varieties, one of the reasons some cooks prefer it.
Modern farming methods have come to the aid of the busy housewife — by giving her a quick-cooking lentil that is perfectly natural with no genetic manipulation or chemicals involved in its cultivation. This lentil, which was developed in the United States, tastes the same as other varieties and can be used in all the traditional recipes. It cooks in less than half an hour and doesn’t need pre-soaking.

Most of the lentils at the supermarket are of the quick-cooking variety and need only a wash before being used. Put them into a saucepan and cover them with water to a depth of three inches. Put a lid on the saucepan and bring the water to the boil over a low heat. Simmer until the lentils are tender.

The simmering time should be about 20 minutes, so start to taste them when they have been simmering for 15 minutes. You will then have a mound of lentils that are ready for use in salads or any other dish that calls for pre-cooked lentils.
You can turn these cooked lentils into a dish in their own right by stirring in a mixture of slowly sautéed onions, garlic, spring onions, plus herbs and spices of your choice. Some Spaniards are very fond of adding a dash of vinegar. 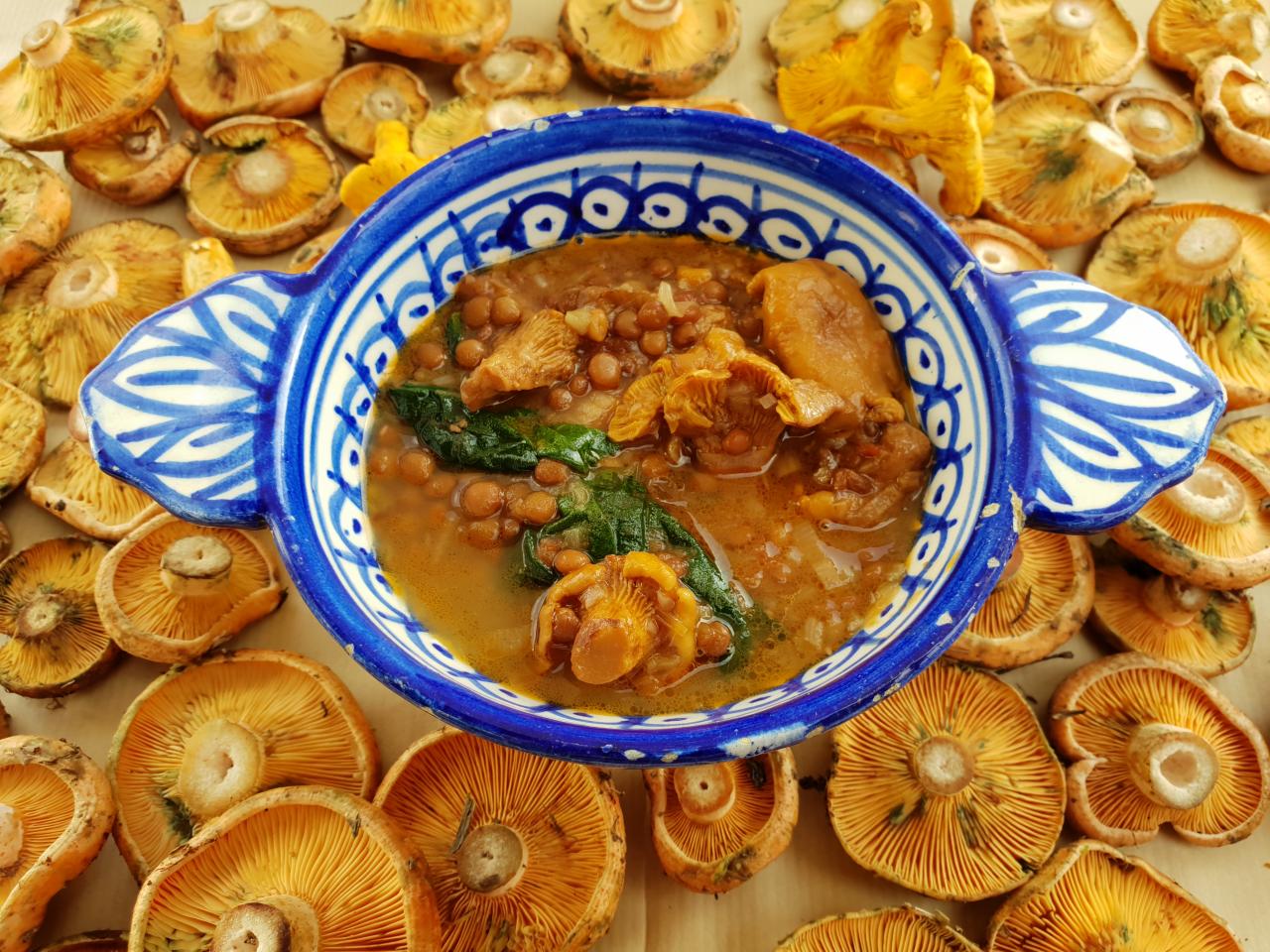 A simple Indian dahl, to be eaten on its own or to go with other dishes, is sheer simplicity. You will need: 250 grs lentils, 2-3 tbsps olive oil, 2 large onions, 3 big garlic cloves cut in thin slices, 2 tsps curry powder, 350 grs tomatoes, 1 bay leaf.
Cook the lentils in simmering water with the bay leaf until soft. Start testing the lentils for softness after 15 minutes. Meanwhile, sauté the chopped onions in the olive oil for 10 minutes and stir in the garlic slices. After two minutes stir in the curry powder and cook for another two minutes.

Two Spanish recipes, one from Madrid and the other from Extremadura, call for lentils to be served with croutons of crisply fried bread, ideal dishes for cold winter days.
The Madrid dish, lentejas con picatostes, makes use of lentils as cooked above. The cooked lentils are put into a greixonera or other earthenware cooking dish, in which a teaspoon of flour was sautéed with a little butter.

The lentils are well stirred, seasoned to taste with salt and pepper, a little nutmeg and lots of finely chopped parsley. The crisply fried croutons are served on the side.

The dish from Extremadura is called lentejas con costrones. Start to cook the lentils as above, but when they have been simmering for five minutes, add a finely chopped onion, roughy chopped garlic, diced red pepper, a heaped teaspoon of paprika (pimentón dulce) and a bay leaf.

When the lentils are soft, add salt and pepper to taste and then drain them. Sauté them briefly in a greixonera with little olive oil and serve them studded with the crisp golden croutons.

Remember that lentils, like all legumes, must be started off in cold water over a low heat and they must simmer. Never cook them at a brisk boil and never use chalky tap water for cooking any of the legumes because they will need longer cooking times.
Some recipes recommend the addition of a pinch of bicarbonate of soda to the cooking water, but this is not a good idea — it changes the taste of the legumes and also destroys the vitamin B content.

Although lentils can be cooked without any pre-soaking, there are occasions when we decide to make them at the last minute and there’s no time to make them from scratch.

That’s when Spain’s excellent jars of cooked lentils, which you have in the pantry, can be used. I have never bought an unacceptable jar of cooked lentils. Even the cheapest supermarket brands are a good buy.

But with cooked legumes, as with everything else, you get what you pay for — so some cooked lentils are better than others. My favourite cooked legumes come from Navarra (which is always a guarantee) and the brand name is Ja’e.
You will always find them at El Corte Inglés and the current price is around €1.38 for a 400 grs jar. Apart from lentils, they do chickpeas, brown beans and at least four varieties of white beans.

Lentils are also a good source of fibre and iron, and are recommended for people with low blood pressure and anaemia. They contain some vitamin A and B as well as traces of calcium.

They are rich in essential amino acids such as leucine, lysine and valine, but short on others such as cysteine and tryptophan, which is why we should eat them with brown rice or brown bread. Lentils also pick up their missing amino acids from fish and meat.
Their carbohydrate content is around 60 per cent but they contain less than one per cent fat. They have very little water (11 per cent) but are rich in fibre (four per cent). Lentils also help to lower the cholesterol count.

They are especially recommended for children. Their high protein content, and their abundance of iron and calcium, make them an essential ingredient for young people. Ideally, they should eat them twice a week.

Lentils also have a down side: the cellulose content of the skins can ferment in the gut and cause intestinal gases — one of the reasons why many people don’t eat them.
But those who are prone to this effect can avoid it by putting the lentils through a vegetable mill, or sieving them.The skins get left behind and you can have the pulp as a puréed soup. You can also make it very thick and serve it as a vegetable with meat.