The day the latest anti covid-19 restrictions on restaurants were announced — no eating inside or on the terraces — I was having the special pasta menu at Sandro’s in Calle Ramon i Cajal. It was a cold blustery day and Sandro for the first time lit one of the two tall gas heaters he had just bought (at a cost of €400 each) for outdoor dining. They give out a lovely heat that was ideal for a day like that.

The six outdoor tables were fully occupied and Sandro, on a skeleton staff, was the only one working them. At one point, as he whizzed past my table, he dropped off a dish of six croquettes, saying he was doing them as part of his new takeaway and home delivery service.

The three kinds of croquettes (spinach, chicken, and aubergine) had obviously just come out of the deep-fryer. I quickly took a picture and then tried one of each.
I was absolutely flabbergasted. All three were the best croquettes I have ever tasted. They should have been presented with a fanfare of trumpets and a New Year’s Eve blast of fireworks to brighten that day’s doleful skies. But Sandro had simply plonked them on the table, almost as an afterthought.

That’s why I was in Sandro’s kitchen at 12.30pm on Wednesday with Michael Gomes, his Portuguese cook who has been working in Spain for some years. When I arrived, Michael was using a rubber spatula to scrape the last of a spinach croquettes paste into a shallow stainless steel tray. The ingredients for a batch of chicken croquette were next on the list of Michael’s chores, but he took time off to make a small amount of aubergine paste so I could see the process from start to finish. I was going to learn 10 simple and essential steps that help to produce smooth paste and the final croquette in its lovely breadcrumb coat. 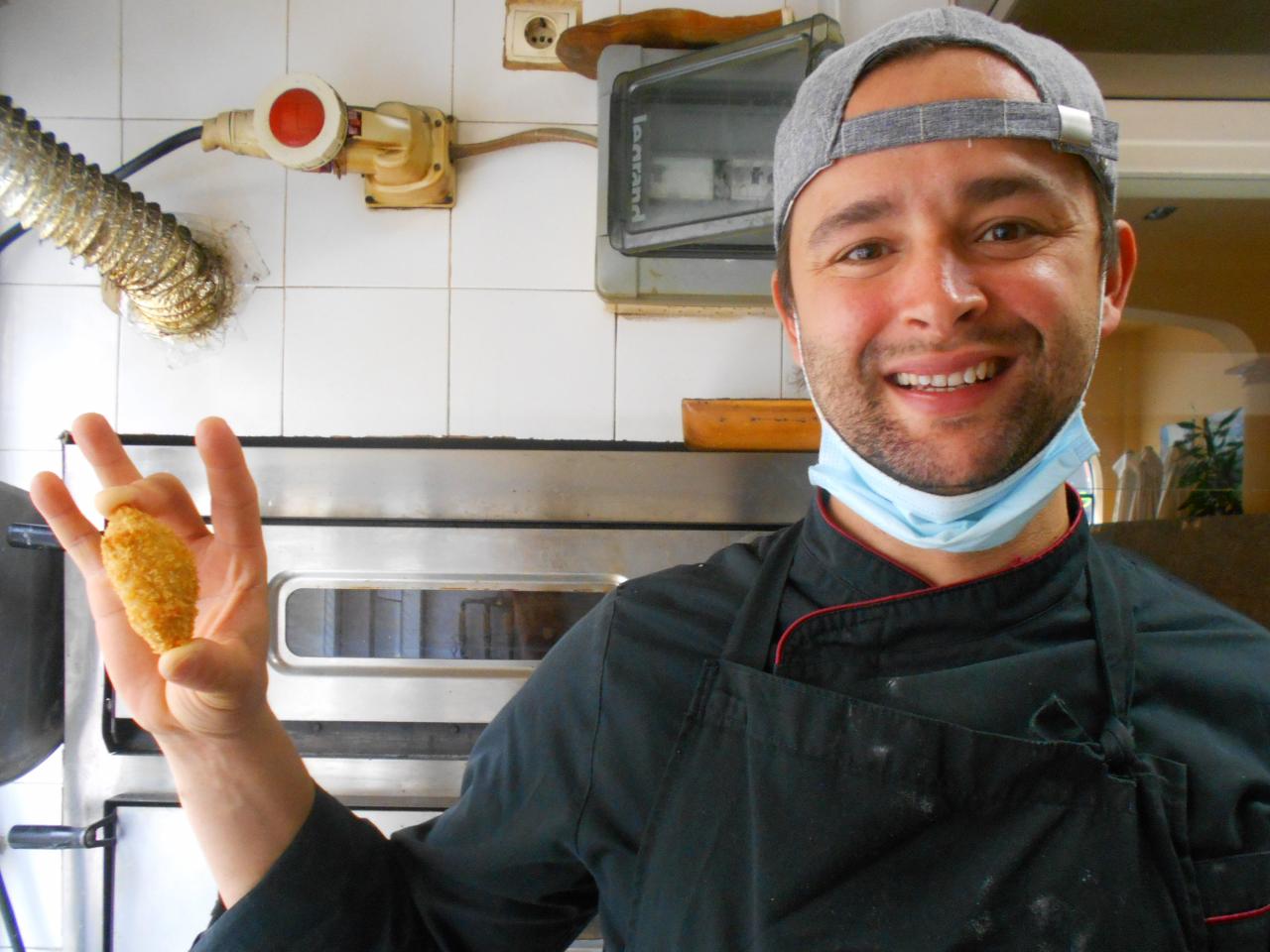 An aubergine had already been done in the oven at 200C for about 40 minutes.The aubergine was baked whole, without having anything done to it, not even a smearing of oil on the skin.

Michael scraped the pulp from the aubergine halves, leaving nothing but the two dark skins which were popped into a small uncovered saucepan of boiling water and would remain there bubbling merrily until needed. The idea is to extract as much flavour as possible from the skins, letting the liquor reduce at the same time so that it becomes concentrated. (Lesson 1).

He put two good chunks of butter into another small saucepan and while it melted he used a hand-held electric blender to reduce the aubergine pulp to a smooth purée. I would have chopped it with a Chinese cleaver, but in restaurant cooking speed and efficiency are essential. (Lesson 2).

Meanwhile, Michael was infusing milk with sprigs of thyme, black pepper and salt, as well as adding a small amount of finely diced onion. He had chopped the onion beautifully by hand because mechanical and electrical methods squeeze out the juices and you don’t want that. (Lesson 3).

Michael had measured the butter by eye but he very carefully weighed out the amount of flour he was going to use. He obviously knew how much milk was being heated and he had to have the exact amount of flour to produce a paste of the right consistency: not too much flour, not too little. (Lesson 4).

By this time the aubergine skin liquor was ready and Michael added a little to the pulp and butter then stirred in the flour, which immediately soaked up what little moisture there was in the saucepan.
He then poured in the infused milk and it seemed to me like too much. But Michael stirred like mad with a wooden spoon and very soon the flour had done its work and the paste was of the right consistency. Correct ratio of ingredients and stir like mad. (Lesson 5).

As soon as the paste is ready it is put into a shallow container, the surface is smoothed over and it is covered with clingfilm. The film must be firmly pressed against the surface of the still warm paste, expelling all air. If this isn’t done the surface dries off and becomes hardish and it not as smooth as the rest of the paste. The croquettes then wouldn’t have a uniform smoothness. (Lesson 6).

On the days when Michael is making batches of croquettes for the restaurant, he does the paste in the morning and shapes the croquettes the next. But in this case the paste went into the freezer for 25 minutes and I went off to do some shopping at a nearby supermarket. 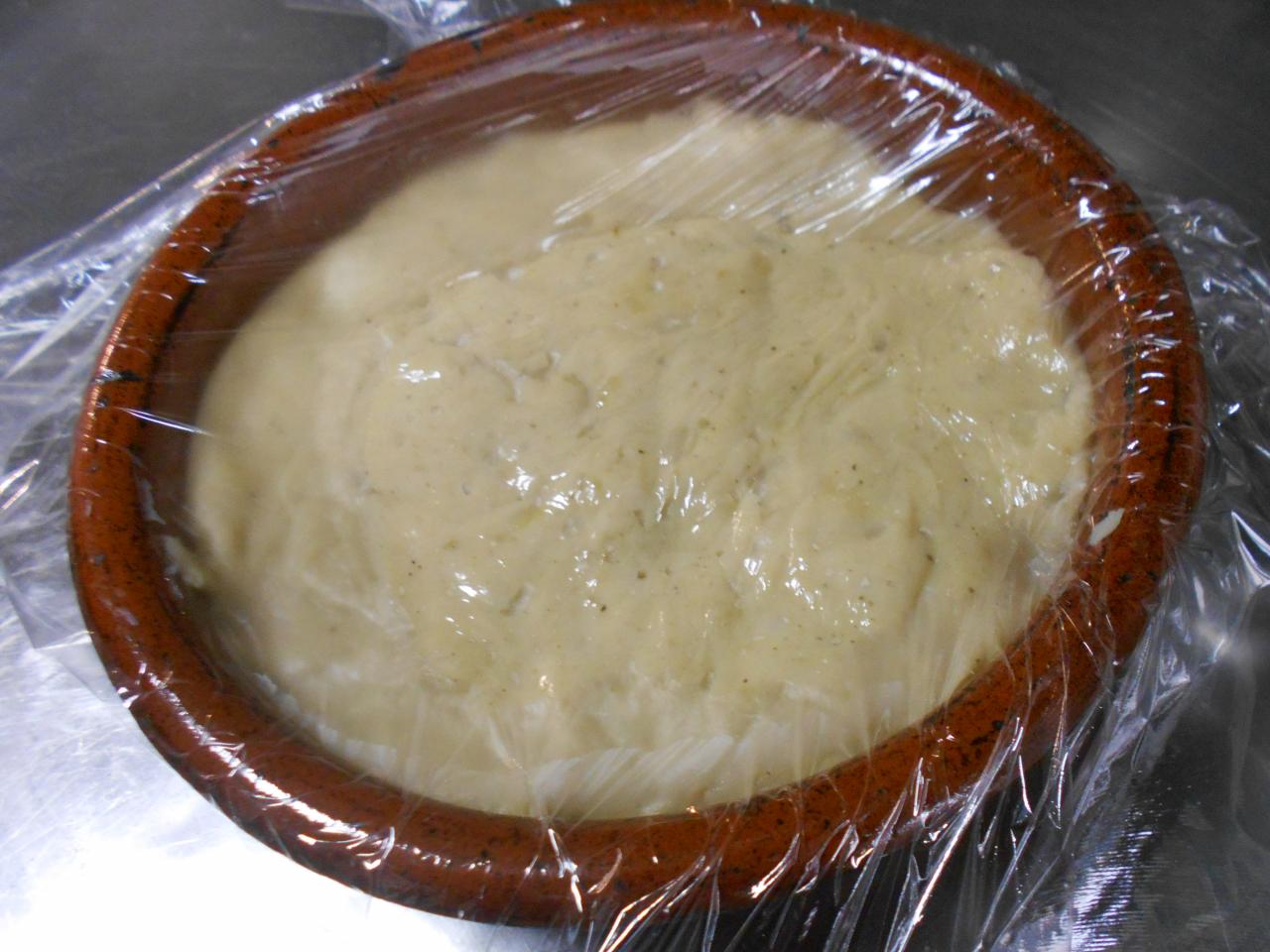 When I returned Michael had the paste on a working surface with three biggish bowls containing flour, beaten egg, and Japanese panko breadcrumbs. He actually weighs the croquettes (40 grs) partly because of costing but also to have them of the same size so they will deep-fry at an even rate. (Lesson 7).

Before shaping the croquettes, Michael rubbed both hands with oil so that the still dampish paste wouldn’t stick to his palms. (Lesson 8).

When the floured and egged croquette ends up in the bowl of panko, Michael swirls it around to cover it with the breadcrumbs and then picks it up and gently presses the panko into place between his palms. (Lesson 9).

The croquettes are now ready and most cooks would leave them in the fridge for an hour or two before deep-frying them. The oil mustn’t be too hot or the croquettes will brown before the heat has had time to penetrate to the centre. Michael does his croquettes at
170C. (Lesson 10).

The croquettes Michael makes can be bought ready for deep-frying at Sandro’s Cien Duros shop next to the restaurant (Tel:971-962311). Pizzas and pastas as as dishes from the restaurant menu can be ordered for takeaway or home delivery. There is a 10 per cent discount for on-line orders and a free bottle of wine with orders of more than €25.

I come through this information that in the matter of Andrew Valente of the day Monday, February 8, 2021 01:15, about the croquettes of Michael domes. They gave rise to information. Sorry, but Chief Miguael Gomes of Sandro's Cien Duros is not Portuguese, he is Brazilian with Italian nationality and speaks Portuguese from Brazil. You should be more careful with this type of information.