There are no definitive recipes for Spain’s emblematic dishes. Even something simple, such as the tortilla española, has a myriad of variations on the basics of eggs, potatoes and (sometimes) onions. When it comes to that great hotchpotch of a dish called cocido madrileño, there is no end to the discussion on the meats, charcuterie, pulses and vegetables an authentic cocido madrileño should contain.

So when I was invited to participate in the serving of a genuine cocido madrileño for six (it was the week before we were no longer allowed to meet in other people’s homes) I went along with a notebook in one hand and a camera in the other.
The invitation came from Claudia Suarez Neuhaus whom I know from years ago when she worked in public relations and organised events related to the food and wine circuit.
Although I’ve called Claudia a madrileña in the above heading, she was born in Argentina, but her family moved to Madrid when she was nine. They spent every summer in Mallorca and Claudia finally moved here in the summer of 1999.

But Claudia thinks like a madrileña and she has very definite (and definitive) ideas about the ingredients of a true cocido madrileño. So I was most interested in seeing and tasting her version.
Although no two cooks will ever agree on the final ingredients of a cocido madrileño, it always contains meats, bones with meat, charcuterie, vegetables and chickpeas.
I asked Claudia to write down her ingredients and she gave them in this order: chickpeas, carrots, cabbage (the variety called ‘repollo’), potatoes (the parmentine variety), ham bones, marrow bones, chicken, shin of beef, knuckle of pork, chorizos frescos, morcilla de Burgos, tocino and fresh belly of pork.

This is the cocido madrileño that Claudia grew up with after moving to Madrid and each ingredient is her deliberate choice. She prefers chorizos frescos to cured ones and buys them at Mercadona where she also gets her morcilla de Burgos, a black pudding with a rice filler.

It is interesting that Claudia started off her list of ingredients with the chickpeas — they are a very important part of the cocido madrileño. They are cooked with the other ingredients, but tied up in a special little net so they can be fished out at the end and presented in all their glory…and very easy to serve.

Some people serve a cocido in three turns — or ‘vuelcos’, as the Spanish word has it. They start with the soup, go on to the vegetables with the chickpeas and finish up with the meats and the charcuterie. Claudia served the soup and arranged the other ingredients on a large platter so that we were able to have a little of each ingredient on our plate, each of us starting with our favourite cocido pieces. I prefer it that way instead of three (and sometimes four) quite different stages.

The drained stock produced after this huge variety of meats, bones and veggies have been cooked together is one of the wonders of gastronomy. We’d never cook so many ingredients together just to make a superb soup, but the cocido items have to be cooked anyway, and the soup is an incredible by-product.

Claudia’s soup, done with the usual little bits of angel’s hair pasta, was especially tasty. As we only ever get a soup as rich as this when cocido is on the menu, everyone made the most of this opportunity and had seconds — except me. And my first plate was a small one.
It has to be like that for me because soup of any kind fills me up immediately and I cannot cope with the rest of the meal — especially when it’s a gargantuan cocido. 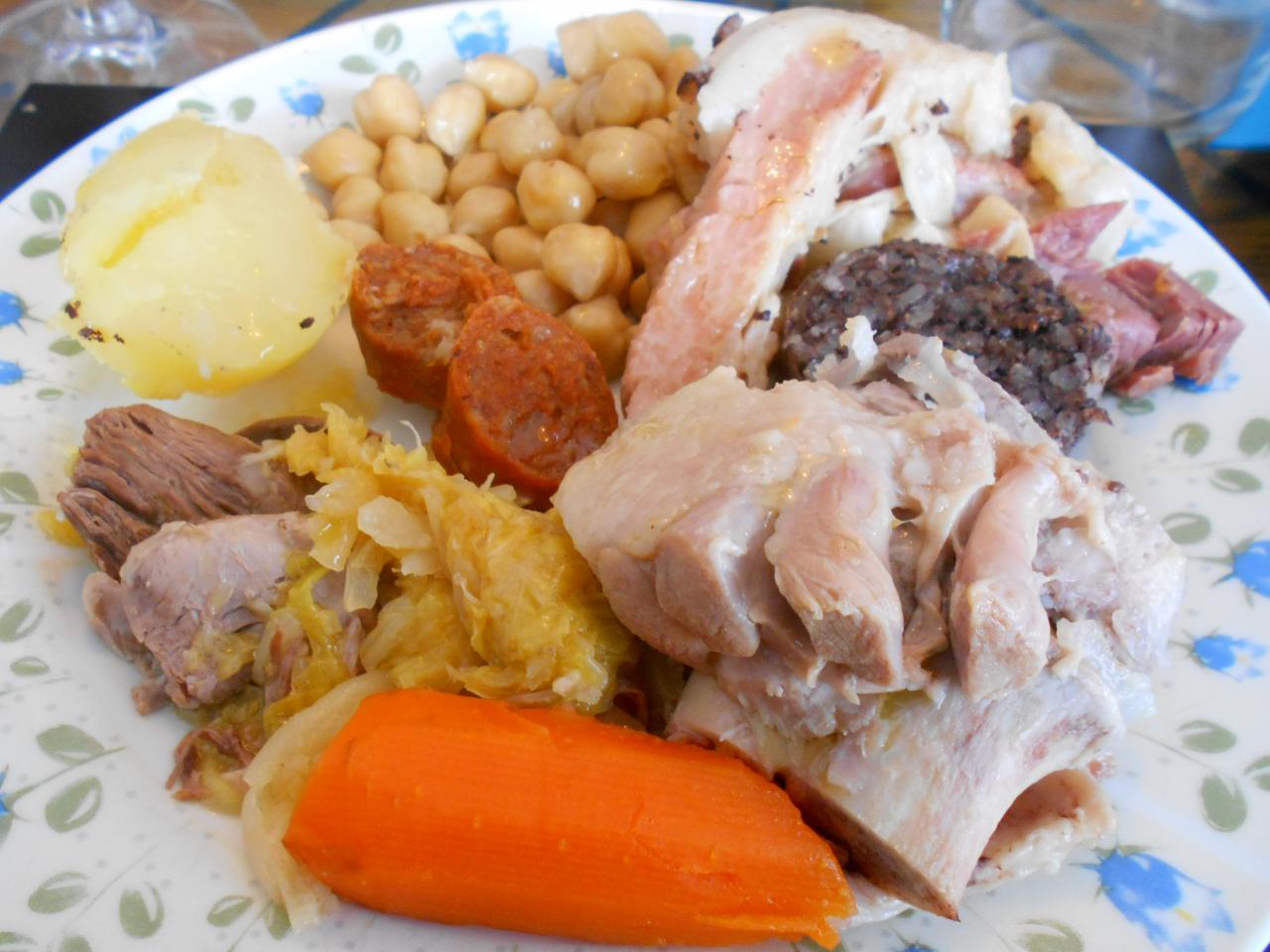 When selecting from the platter of cocido goodies, I was serving myself tapas-like portions — a piece of potato, a small chunk of carrot, a morsel of ham from the bone, a nugget-sized segment of shin of beef, a bit of beef marrow howked out with the tip of my knife, a velvet-soft corner of tocino, a spoonful of frizzy cabbage, a small section of chicken that wasn’t overcooked as usually happens in all cocidos, a thickish slice of morcilla de Burgos (the first time I’ve had it boiled and it was delish), a small piece of fresh chorizo no longer than half my thumb, and a heaped tablespoon of chickpeas, which were perfectly cooked. I later had seconds of some items…and even thirds of others.

One of the defects of all cocidos I have eaten (with the exception of those at Jarana in Calle Cotoner when Blanca Navarro was running it) is that the beef and ternera components are overcooked and become stringy. That didn’t happen with Claudia’s shin of beef. It could be cut cleanly with a knife and didn’t fall into a mound of strings.

My sister used to break all the rules about cooking cabbage: simmered until it was a kind of mush and then sautéed in olive oil in a large frying pan until it had lost most of its excess liquid.

Five minutes before serving it, she turned the heat up high and stirred it lightly every minute. Some of the cabbage got slightly scorched and that made it very tasty. It was then served as a veg with grilled or roast meats and was sometimes topped with a couple of fried eggs as a supper dish.

Next day I bought a ‘repollo’ and did it according to my sister’s rule-breaking recipe. It was a lovely spin-off from Claudia’s splendid cocido madrileño.
You’ll find cocidos all over Spain and in many European countries. You have them in England (Lancashire hot pot), Scotland (various soup-stews) and France (pot au feu). Spain has several cocidos including a Majorcan one (el bollit mallorquí), the Catalán (escudella I carn d’olla) and the cocido andaluz plus others. There is even an Argentinian one called ‘el puchero argentino’, a direct descendent from the Spanish cocidos.
The cocido madrileño is the most famous of the cocidos because it has been written about most frequently and because celebrated restaurants such as Lhardy have made it well known all over the country and also abroad.

Lhardy was founded in 1839 and is one of the oldest restaurants in Madrid. At a time when some madrileños ate cocido every day for lunch during the working week, the cocido at Lhardy was a favourite with political leaders, intellectuals, writers, artists, actors and personalities from very sphere of Madrid’s cultural and social life.
The cooks at Lhardy, who always kept religiously to all the classic ingredients of the traditional cocido madrileño, gave the dish a touch of class, but it was always popular at all levels of society. Workmen on building sites and others with outdoor jobs, used to have it for lunch every day without having to move a finger or a foot — their wives brought it along in a pot, heating it up on a trivet over a makeshift fire. 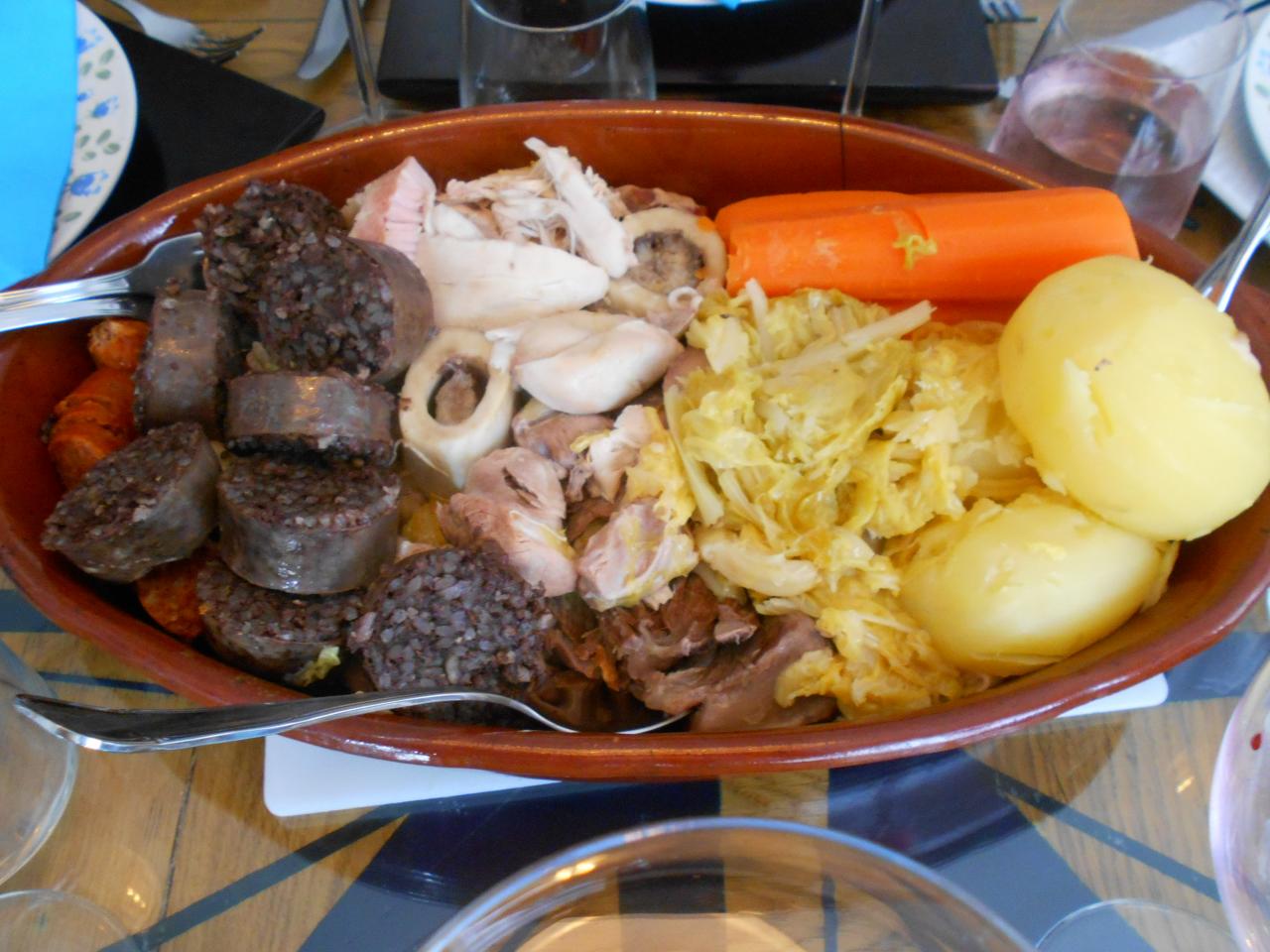 At the turn of the 20th century, a famous Madrid tavern called La Bola, served three kinds of cocido very day. At noon they did one for 75 centimos (three quarters of a peseta) for workmen in the neighbourhood.

There was a more elaborate one at 1.30pm for office workers priced at 1.25 pesetas. At around 2.30pm they served the third cocido at 1.50 pesetas — considered to be expensive in those days. This one was for political figures, intellectuals and anyone else who liked to live high on the hog.

So with the peseta equivalent of one euro (166.386 ptas) you could have invited 100 people to the third cocido and still have enough change for a round of post-prandial drinks. It’s amazing what inflation does to a currency.

A cocido at a reasonable Palma restaurant nowadays costs around €15 per person. The last time I looked at Lhardy’s cocido price (about three years ago) it was a whopping €35.50.

For the meatball they use 500 grs minced beef, 150 grs finely chopped streaky bacon, garlic clove, chopped parsley to taste, 2 tbsps fresh breadcrumbs, one egg.
They also serve a tomato sauce for which they use 1 carrot, 1 leek, garlic clove, bay leaf, thyme, 1 tsp sweet paprika and 1 kilo of fresh tomatoes.
****
Put the chickpeas to soak in lukewarm water the day before you use them. Rinse and drain well before cooking them.
In a pot of at least five litres capacity, put the shin of beef, the hen, the unsmoked bacon, the beef knuckle bone, the knuckle of ham, the chickpeas in a net or muslin bag so they can be retrieved easily, and enough water to cover everything. Bring to the boil and simmer for two hours.

Twenty minutes before the cocido is ready, add the potatoes and the minced meat mixture formed into a cylindrical shape and lightly sautéed in a frying pan before being bound in a muslin bag.

In a separate ovenproof pot with a lid, put the sliced cabbage with some cold water. Bring to the boil and pour away the water. Add the chorizos, the morcillas, cured ham, sausages, fresh belly or pork, marrow bones and carrots. Cover and put in the oven for an hour and a half.

The soup is made by straining by straining off the stock from the meat and simmering it with the angel’s hair pasta for about six minutes. Just before serving the soup, add the diced chicken livers previously simmered in a little of the stock.

The chickpeas are put into the entre of a big oval dish, surrounded by the shin of beef, the bacon, the carved hen and the minced meat log cut into slices. The marrow bones go round the rim of the platter, each piece adorned with a slice of carrot.

The vegetables are served in another dish with the chorizos, the morcillas, the ham, belly of pork and the sausages cut into pieces. The potatoes, either whole or cut into wedges, go round the edge of the dish. This is served at the same time as the meats, with the tomato sauce in a separate dish.

I dislike the idea of adding chicken livers to the soup because the soup is then too rich and is more filling than necessary. I also think there’s no need for the fresh tomato sauce.
According to Lhardy’s cooks, there are five rules we must follow to make a really good cocido.

1. Never soak the chickpeas with bicarbonate of soda as this makes them turn black and alters the taste. Some cooks use bicarbonate to help tenderise the chickpeas, but this isn’t necessary.

2. The chorizos should always cook with the vegetables and never with the meats and chickpeas as they change the taste of the soup and make it reddish.

3. Mix in some finely chopped streaky bacon with plenty of fat when making the big meatball.

4. While the chickpeas are cooking, any extra water added to the pot must be boiling hot.

5. If the cocido is being made in a pressure cooker, the stock must be well skimmed before closing it, otherwise the stock will be of a dark unappetising colour.