In the middle of April last year, when we weren’t even into the second month of lockdown, a Spanish psychologist was predicting in an interview that most of us would gain at least four or five kilos before life got back to normal. She was dead right.

I stopped using bathroom scales decades ago because even the most expensive ones are totally inaccurate, so I don’t know if I’ve put on four or five kilos since last March.
But I do know that trousers which were a nice fit before the virus started to change so much of our daily routine, can no longer be buttoned at the waist. That is a much louder warning bell than the numbers on a weighing machine.

A trouser waistband is the most accurate way of telling us if we have gained weight. All we have to do is get the message and do something about it…such as eating more vegetables and fruit. Especially for dinner.
Since January 6 (the end of the 12 days of Christmas) I have become completely aware of those veggies with low-cal content — and the endive’s 15 per 100 grs makes it one of the lowest. And at €2.02 for a pack of three good-sized pieces, that’s three little starters at 67 centimos each. So the price is right.

As soon as the word endive is mentioned in a food article, especially in a publication like the Bulletin which has British and American readers, you enter a philological nightmare and the only way out of it is to explain what you mean.

What I mean by endive is the Belgian endive, the torpedo-like veggie with tight white leaves that are sometimes yellowish or green at the edges. The leaves are bitter but refreshing and can be eaten raw or cooked.
In England this vegetable is called chicory and the Americans, like the Spanish and the French, call it Belgian endive. But for most English people an endive is the curly green lettuce Americans call chicory or escarole.

In Spanish it is called escarola and it is particularly popular in Majorca. When you order roast suckling pig in Majorca (lechona al horno) it usually comes with small fried or roast potatoes (patató) plus escarole salad.

So in any Anglo-American conversation about endives or chicory, one must always stipulate if it’s the green stuff or the white stuff that’s under discussion. When I use endive I mean the white torpedo-shaped veggie.

The French get over this little difficulty by referring to the white torpedo as ‘endive de Bruxelles’, because the first batches sold in France came from Brussels and were sold under that name. The Belgians grow huge quantities of endive but they pile on the confusion by calling it ‘chicorée de Bruxelles’.
Spaniards don’t escape from this linguistic quagmire because for some the endive (‘endibia’) is called ‘chicoria’ and for others the green curly lettuce is ‘endibia’ instead of ‘escarola’.

We can avoid some of the confusion if we always make it clear whether we are talking about the white or the green kind. But even so, it’s amazing how often the endive and chicory words can lead to arguments as bitter as the vegetable itself.
Wild endive grew in Europe and parts of Asia, and the Egyptians and some of the Arab nations ate it in salads, but the leaves were always blanched and never eaten raw. The short leaves always have a bitter taste even when cooked.

Cultivated endive (Cichorium endivis) is a relatively recent vegetable — it was discovered in 1850 by Jean Brezier, head gardener of the Belgian Horticultural Society.
He wanted to grow pure white endives and thought of cultivating them underground, like the French mushrooms known as ‘champignons de Paris’. He grew them in sandy ground with the vegetable never being allowed to see the light of day.

M. Brezier was highly delighted with his discovery but for a long time it was a mere curiosity in the markets of Brussels, which already had a wide variety of cultivated veggies. 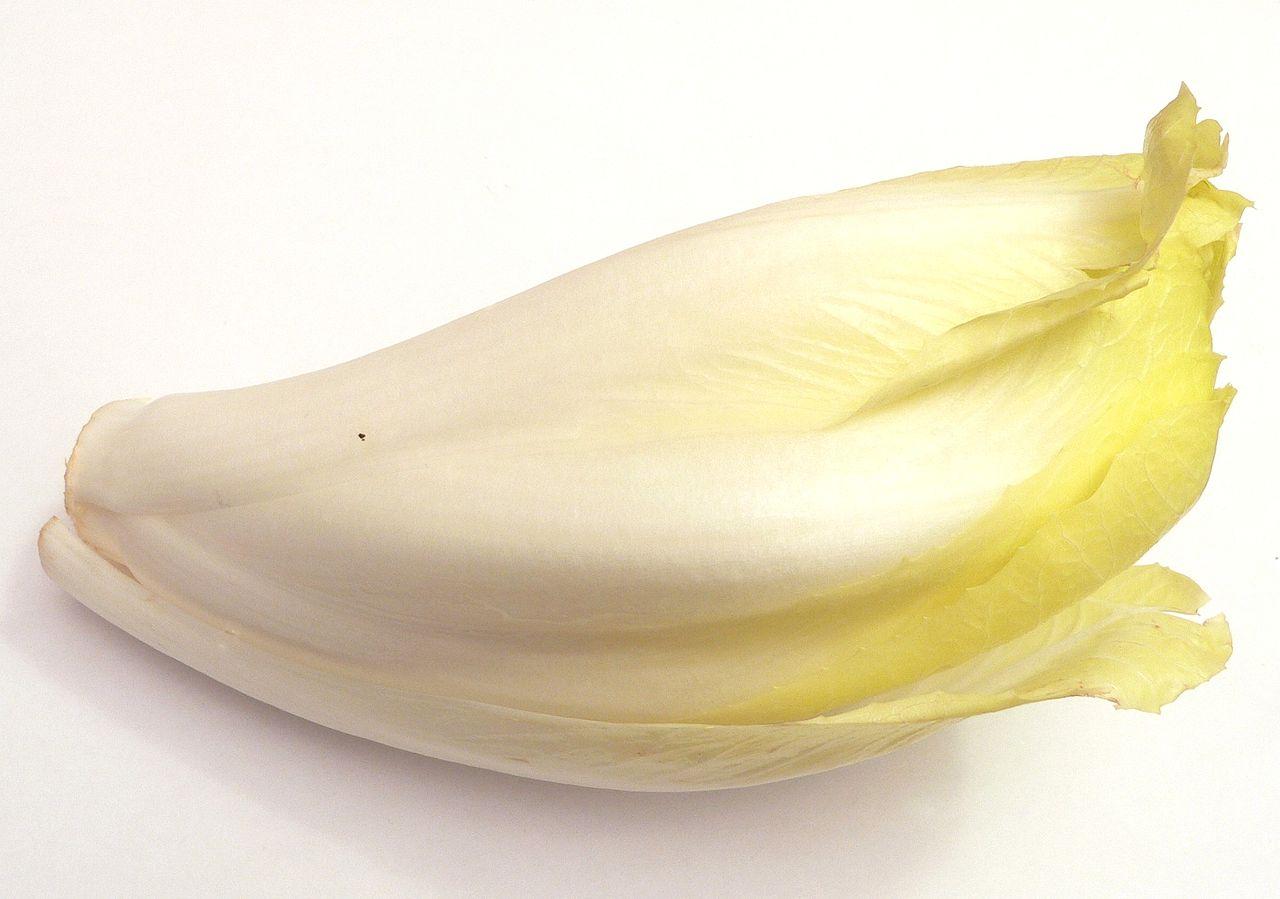 The French horticulturalist Henri de Vilmorin 25 years later put a box of endives on show at the French Horticultural Society’s annual exhibition where they aroused great interest. Three years after that they were on sale at Les Halles market in Paris.

Endives are even more of a newcomer to Spain: they didn’t start to appear at local markets until about 1950 but it took some time before they became popular. Although the bitter taste appeals to many Spaniards, the endives had an in-built defect: they were a good deal dearer than Spanish-grown salad vegetables.

But farmers all over the world are very good at jumping on bandwagons, so Spanish growers eventually cultivated their on endives. Although they at first cashed in and sold them at roughly the same price as endives imported from Belgium, the market soon became saturated and prices began to fall.

Endives are now a most economical vegetable, especially when supermarkets use them as a loss leader. These days I am buying a pack of three plump ones for around €2, or a packet of four mini endives (all of the same size) for just under €2.
Restaurant cooks and housewives are attracted to the boat-like shape of the leaves which make perfect containers for fillings of all kinds. Stuffed leaves make ideal buffet and party food.

Restaurants serve the leaves with blue cheese fillings or what is called ‘salpicón’ — a mixture of chopped raw tomatoes, onions, olives and capers with the addition of diced fish or shellfish. Chopped smoked salmon mixed with mayonnaise is another favourite filling, as is cottage cheese with herbs or spices. Cream cheese with toppings of salmon or trout roe are also delicious.

At the top end of the market, some restaurant cooks serve mini endive leaves on a bed of crushed ice with a raw oyster as a filling. If our budget doesn’t run to oysters, we can do this at home with steamed mussels and a mayonnaise or vinaigrette dressing.
Endives also combine well with walnuts, which provide a contrast of textures as well as extra layers of flavour. Grapes are also a good match, the sweetness of one and the bitterness of the other creating lovely taste sensations.

You should also try endives with other bitter salad veggies such as watercress, lamb’s lettuce, rocket and even young spinach. I’ve never tried it, but I am told that whole raw endive leaves sprinkled with slivers of rhubarb are also memorable.
There is no need to boil endives in water to cover, as so many recipes recommend. Put them into a thick saucepan with a tight lid and sauté them ever so gently in lots of butter with no additional liquid. Fifteen minutes in the butter and their own juices should be enough to cook them al dente. The mini endives are best for cooking whole because they are all of the same size.

Endives au gratin is a French recipe and a lovely starter or a cold weather supper dish. It works best with mini endives and makes good use of two full-flavoured cheeses. You will need: 6-8 mini endives, 65 grs butter, 65 grs flour, 350 mls hot milk and 70 grs each of manchego cheese and parmesan, plus a little extra butter for braising the endives.
Arrange the endives in a single layer in a saucepan with a tight lid and gently simmer for 10 minutes in their own juices. Transfer the endives to a well-buttered shallow baking dish, also in a single layer.

Make a roux with the butter, flour and milk, stirring over a low heat until the sauce thickens. Add the grated manchego cheese and continue to stir until well blended into the sauce.

Pour this sauce over the endives, sprinkle with the parmesan cheese, dot with a little extra butter and bake in a hot oven until the surface is golden and slightly scorched in places.

A delicious little dish but most definitely not for those who are trying to get their weight back to normal.