You will come cross many Spaniards who eat bacalao (salt cod) at least once a week throughout the year, but for others it is very much a family tradition that is restricted to Lent and, especially, to the 10 days or so leading up to Easter.

So bacalao is now in the limelight and if your local supermarket isn’t displaying piles of flat butterflied salt cod stacked on top of each other, it soon will be. These mummified pieces of salt cod don’t look at all appetising: they’re so stiff and dried out you’d think that with a couple of wheels attached to the front and one at the tail end, the kids could use them as skateboards.

But one of the miracles of salt cod is that when it is soaked in fresh cold water, it soon resuscitates and takes on its original fresh flexible state. This kind of bacalao, however, has its disadvantages. For starters, you have to buy the whole pieces or, at least, half of one — and even the smaller amount can be too much for many people.

And if you’re interested only in the thick central section (the suprême) perhaps there won’t be enough of it — but you also have to buy the other parts you don’t really want.
The desalting of the whole and half pieces of cod can be messy: there’s a lot of skin, bones and slippery tail end pieces to be taken care of. Real bacalao aficionados don’t mind this and, indeed, for certain dishes they need the gelatin from the skin and tails.

But others (and that includes me and most of my connoisseur friends who adore bacalao at all times of the year) it’s best to keep away from the grubby side of preparing and cooking bacalao.

That means staying clear of the mummified bacalao and buying only those lovely clean fillets and suprêmes that are sold at the Mercat d’Olivar and some specialist outlets.

The best place I know of for beautiful pieces of bacalao ready for desalting and cooking is Aceitunera Balear, which has had a stall at the Mercat d’Olivar since it first opened in 1951. It’s a family concern, of course, and Marta Sabater is the fourth generation of the family that owns it.

By using only the superb fillets in the picture, you will save yourself a great deal of work and inconvenience— and you will taste some of the world’s finest bacalao. As you can see in the picture of bacalao fillets and suprêmes, much of what is on sale comes from Iceland — and for many connoisseurs that is the finest bacalao of all.

But as always when we buy something at the top end of the market, the price is high and may not be right for all of us. If that’s the case, then I suggest you get nothing but the best bacalao and compensate by cutting down in other departments of the weekly budget.

Now that we have bought some truly fine pieces of bacalao (and if they’re from Iceland all to the good), the first step towards getting them on to the table is the desalting — if that isn’t done properly your dish of bacalao will never be a success. 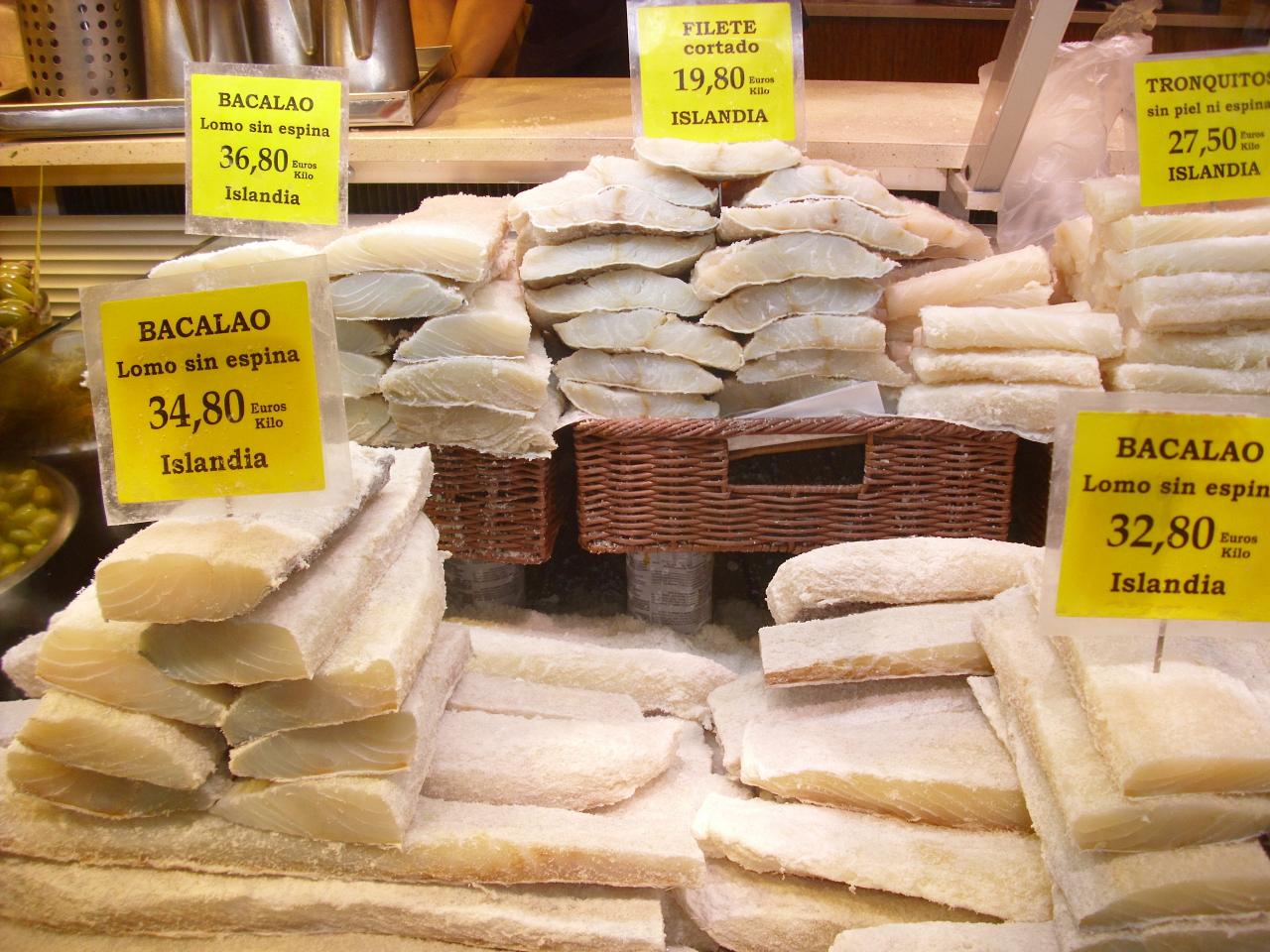 In the Basque Country of the old days, the desalting was done by putting the pieces of bacalao on the bed of a fast-flowing stream and kept in place with a suitable stone. That isn’t practicable nowadays, even if one has stream a few steps from the kitchen door.
Bacalao has salt clinging to its surface, so the first thing is to wash that away under a running tap. Gently rub the flesh and the skin of the fish with your fingers so that you get rid of as much encrusted salt as possible.

I have mentioned several times that salt cod is sometimes in a mummified state, and that is not an exaggeration. When we cook bacalao we must get rid of all traces of its mummified existence. It’s not enough to simply desalt the pieces of bacalao — the flesh must also be rehydrated, a stage that is quite separate from the desalting.

The thing is that some cooks do not completely rehydrate their bacalao and the result is a piece of fish that is saltier than it should be.
It’s the Cataláns who best appreciate and understand the need to rehydrate bacalao — and it is they who have evolved the most efficient method for achieving this.

Having washed off as much surface salt as possible under a running tap, the Cataláns put the pieces of bacalao into a suitable container in a single layer, skin side up, and cover it by about two inches of water.

The dish is then left in the fridge for between two and four days and WITHOUT changing the water. The bacalao is not being desalted, it is simply being given a chance to soak up water and rehydrate. This is exactly what it needs to get back a semblance of its former fresh state.

The slices of bacalao are kept in their rehydrating bath for two to four days depending on how thick they are. Only after that rehydration period are they ready for the desalting process.

The desalting of bacalao is as uncomplicated as rehydrating it, although it needs more of our attention because the desalting water should be changed three times a day.
When the slices are taken from the rehydration bath they should be washed carefully under a running tap and then placed in a flat bottomed earthenware dish, such as a cazuela or a greixonera, and well covered with water.

In the pre-preparation of bacalao dishes, the slices are always soaked and cooked with the skin side up and care must be taken to avoid damaging it and leaching some of its fat and gelatin.

You must change the desalting water at least every eight hours. On the first day of desalting I change the water every six hours and then every eight after that.
Many recipes tell you to desalt the bacalao for 24 hours, some make it 36 and a few suggest 48 hours. These numbers aren’t arbitrary: they depend on the thickness of the bacalao and its initial degree of saltiness.

I keep tasting the water and checking on its salinity after the first 24 hours of desalting. That way I can bring the process to a quick end — or I can continue it. It is essential that all finished dishes of bacalao have a mere suspicion of salinity, a reminder of their long preservation in salt. If that is missing, we may as well cook fresh cod. The desalting container should be wide enough for the slices of bacalao to be laid out in a single layer. If some slices were on top of each other, salt from the top one would pass to the one under it and it wouldn’t be properly desalted.

If the dish you are using for desalting isn’t very deep, then you would have to change the water at least four times a day to compensate for this lack of depth.

With the desalting process completed, we are now ready to go on to the most interesting part: the cooking of the bacalao. There are hundreds of recipes to choose from — I have five files packed with them plus 20 books on bacalao, one of which is called ‘323 Recipes for Bacalao’.

But I don’t need all these recipes because my preference is for the simplest of cooking methods. If I have a beautiful suprême of Icelandic bacalao I dry it well, coat it with flour and then sauté it on a very high heat in virgen extra olive oil, two minutes on the flesh side and three to four on the skin side.

And that’s it. I serve it without any kind of embellishment — not even a herb, or a slice of tomato or a lettuce leaf. I don’t want anything else to come between the bacalao and my tastebuds. 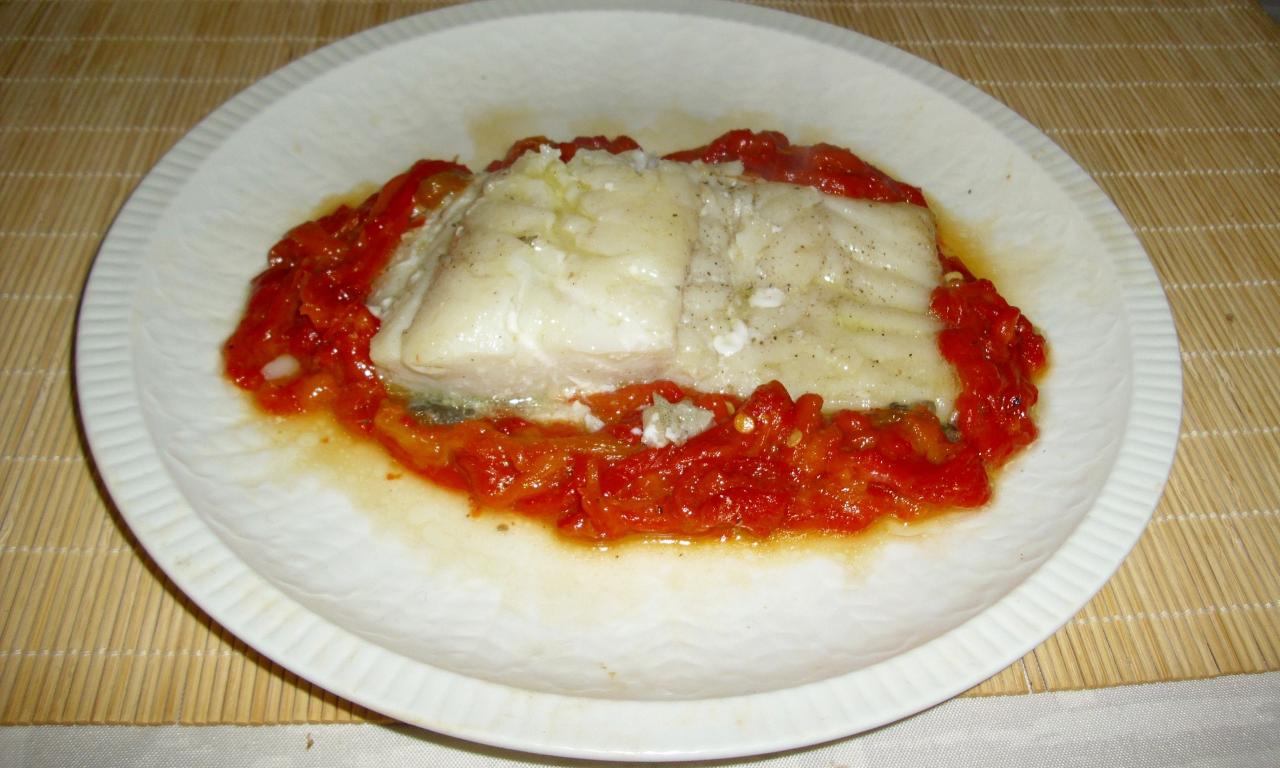 I occasionally sauté it as above and then serve it on bed of creamed spinach or a thick tomato sauce made with fresh tomatoes and virgen extra olive oil, with not even a herb to get in the way. Here are a few of the classic ways of doing bacalao some of which you will see from time to time in island restaurants.

This is the dish novelist Ernest Hemingway always ate when he visited Pamplona for the San Fermin bullfight fiesta. Slivers of bacalao without skin or bones are sautéed with onions, garlic and tomatoes in a cazuela. Sometimes slices of fried potato are added. A Navarra speciality, although it is made in other parts of Spain.

A suprême of the best bacalao is first sautéed in a frying pan and then transferred to a tinplate container (la llauna) to be finished off in the oven with garlic, paprika and a splash of white wine. A famous Barcelona speciality loved by everyone, rich and poor alike. I’ve never seen a genuine version (with the llauna) in a Majorcan restaurant.

A Catalán dish and the most famous of the bacalao salads. Uncooked slivers of bacalao are mixed with sliced onions, red peppers, black olives and sometimes tomatoes. The mixture is generously dressed with virgen extra olive oil. A delicious way of eating bacalao on a hot summer’s day.

Omelettes made with lightly cooked strips of bacalao are very popular in the Basque Country. This is not an easy dish to get right: the tortilla should be well-cooked on the outside but with a runny interior. A superb dish when done properly.

Slices of bacalao cooked in a thick and oily tomato sauce. A popular way of doing bacalao in Spanish homes, partly because it is foolproof, can be made in advance and is suitable for the inferior sections of bacalao. In some restaurants a bacalao con tomate with slivers of roasted red peppers often masquerades as a ‘bacalao a la vizcaina’, a speciality that should be made with red pepper sauce (no tomato).

A way of serving fish in a sauce that contains a huge quantity of finely chopped parsley. The recipe also calls for garlic, onions and potatoes. When done with merluza (hake), asparagus spears are usually added.

Thick slices of bacalao are baked in the oven with onions, tomatoes, spring onions, potatoes, pinenuts and raisins. A tasty and aromatic dish that is reminiscent of Arab cooking. The most famous recipe done by this method is ‘mero (grouper) a la mallorquina’, which is featured on many island restaurant menus.

Suprêmes of bacalao are coated with flour and fried in virgen extra olive oil until of a deepish golden colour. They are placed on a serving dish, topped with a thick tomato sauce and then spread with a mayonnaise that contains puréed garlic. The dish is put under a hot grill until the surface takes on a rich golden colour. A highly aromatic way of serving bacalao that will delight garlic lovers. 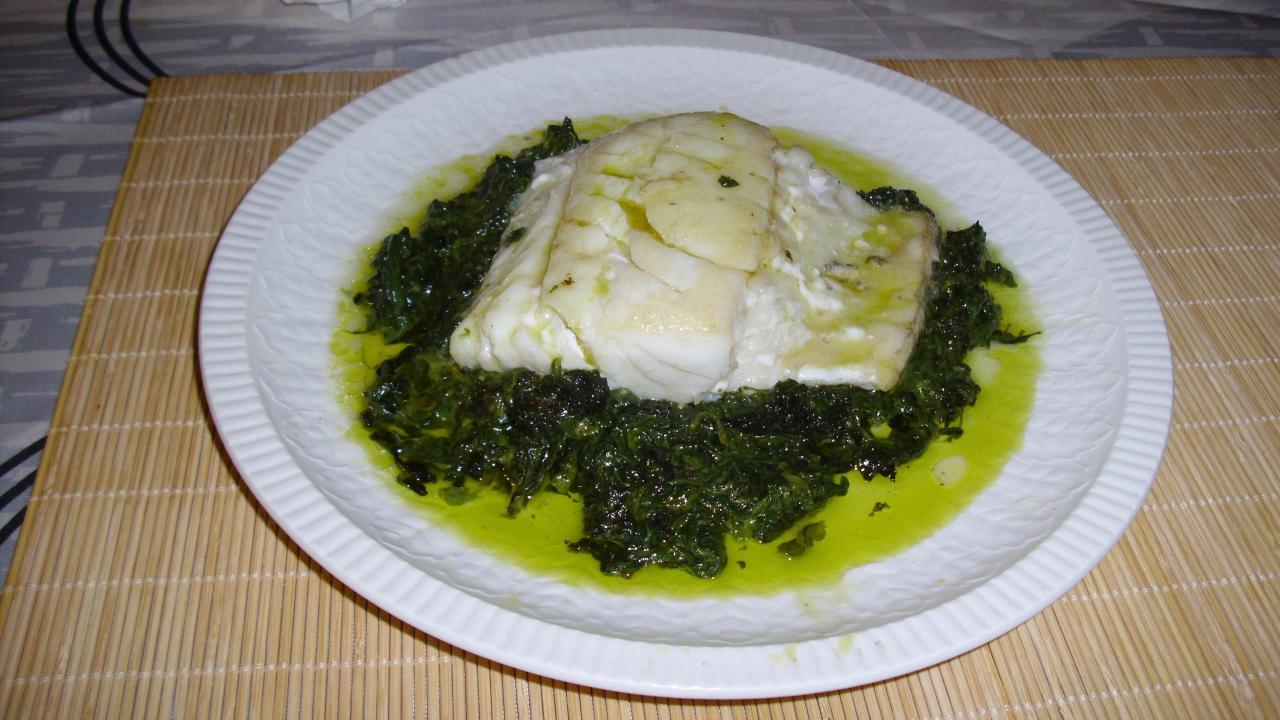