It’s been ages since I’ve seen bagels on the shelves at Palma supermarkets, but they were back last week — and it’s partly because of the anti-covid restrictions on bars and restaurants which means they can only do takeaway dishes or home delivery.

This has led to a new scenario in which customers are being offered wide range of sandwiches for takeaway as well as a selection of savoury pies. None of the outlets I pass has bagels with a variety of fillings, but El Corte Inglés in Jaime III is selling bags of four in a pack with a Stars and Stripes graphic design.

In recent years Britons have been eating more bagels than ever before. Their popularity at one point was so great that Tesco had to quadruple its range to keep up with demand. The supermarket chain now has eight types of bagels on its shelves.

Filled bagels are a popular alternative at sandwich bars and thousands of workers pack them in their lunch boxes. Yet bagels didn’t catch on when they were first sold in London at the start of the 20th century.

The bagel first came on the scene in Vienna after the 1638 siege by the Turks. The Turkish attack on Vienna, which put the future of Austria’s Christianity under threat, was beaten off with the help of King Jan Sonieski of Poland.

A Jewish baker in Vienna wanted to do something to honour King Jan’s pivotal part in driving off the Turks, so he baked a new kind of roll. It had a hole in the middle and looked like a doughnut — but it was much bigger and was made with a different kind of dough.

The bread roll’s circular shape and the central hole didn’t happen by chance. The baker had made the new roll in the form of a stirrup of those days because Jan was an accomplished horseman. Because of the shape, the new roll was given the name ‘böugel’, an Old German word for stirrup.

The böugel eventually became the favourite bread roll of Jewish people in East Europe. As it travelled around other countries its name changed to ‘beygel’, a Yiddish version of the Old German word.

Yiddish is the vernacular language used by Jews in central and eastern Europe. It is based on German and Hebrew with liberal borrowings from modern Slav languages. It still has some 200,000 speakers, mainly in the United States, Israel, and Russia.

During mass emigration to the United States at the end of the 19th century, the Jews of East Europe took their beygel to New York City where it was soon accepted by the local population.

But as Americans like to simplify spelling when possible, the name underwent another change: it was now written as ‘bagel’ and pronounced ‘bay-gel’ with a hard ‘g’.

The bagel became one of the staple foods of New York City Jews but was also much appreciated by the non-Jewish population, especially the customers of the city’s famous delis. 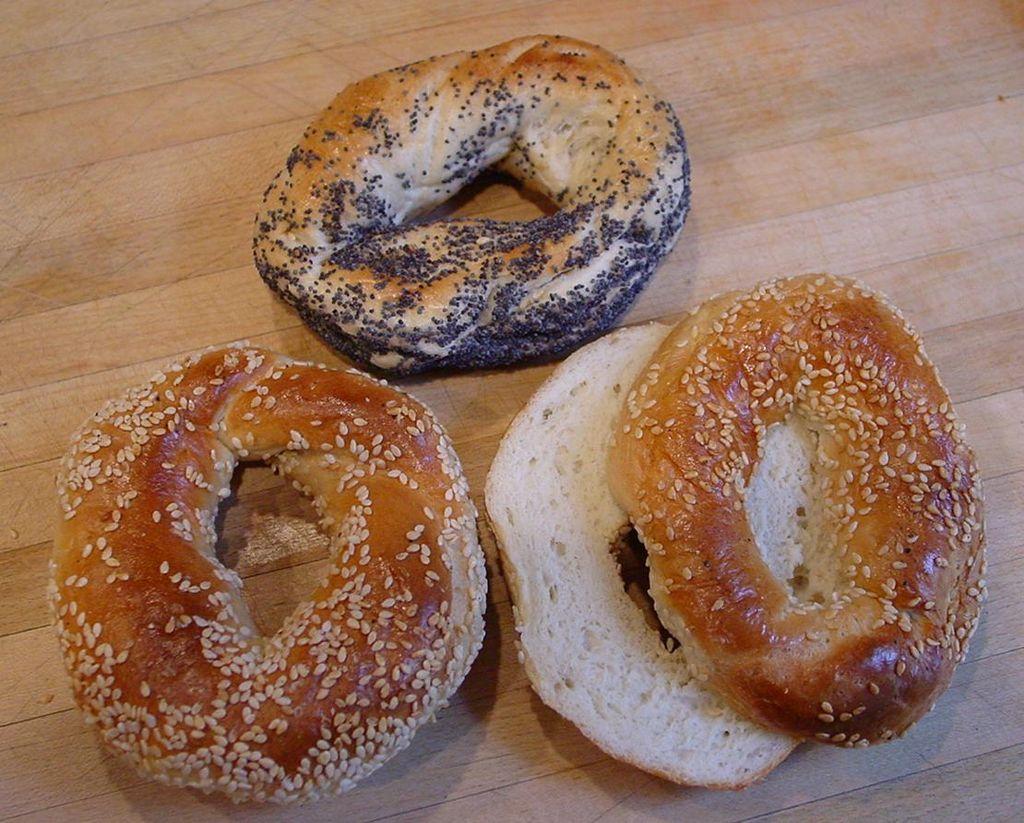 Bagels crossed the Atlantic at the start of the 20th century and could be bought in London’s Jewish districts. But they never took off as they did in New York City.

Londoners who wanted bagels had to go to Jewish bakeries in Whitechapel, Aldgate and Stepney, where they were often advertised in shop windows as ‘beigels’.

Bagels were a bit of a mystery for most British people until the early 1990s when there was a surge in their popularity all over the world. Bagels were so trendy six years later they were readily available in most major English cities and in other European countries.

This was when you could buy them for the first time in Mallorca. They were at Nice Price and other outlets that stock British products. I also saw them in those days at El Corte Inglés, Mercadona and Carrefour.

The ingredients that go into bagels are common enough: flour, butter, egg yolk, sugar and yeast. But bagels differ from other bread rolls in the way they are cooked.

After bagels have been shaped with the traditional hole in the middle, they are plunged into boiling water for 60-90 seconds. They are then baked in an oven for 20-30 minutes, depending on their size.

This initial boiling, known in the trade as flash-boiling, is absolutely essential in the making of an authentic bagel. It is done to gelatinise some of the starch in the dough, thus changing the density of the finished bagel.

It is thanks to the flash-boiling that the bagel has its characteristic chewy interior, with the oven baking giving it a brown glossy finish with a touch of crispness.

Some breads and other baked goods, including Majorca’s ensaimada, are sprayed with water before going into the oven to produce the same result, but to a much lesser extent. The flash-boiling of bagels gelatinises more starch and a thicker crust is formed.

So if you’re new to bagels don’t expect a light silky texture when you bite into one. Instead, it will be satisfyingly chewy, the touch that connoisseurs treasure. It’s akin to the al dente bite that Italians look for in pasta.

You can eat bagels as they come but they are better when toasted and eaten while still warm. Toasted bagels always have a better texture.

Despite its long pedigree and its particular shape, a bagel is simply another kind of bread roll, so it can accommodate a wide variety of fillings. But one of them is traditionally Jewish and that’s the one most people adore: Philadelphia cheese and smoked salmon. 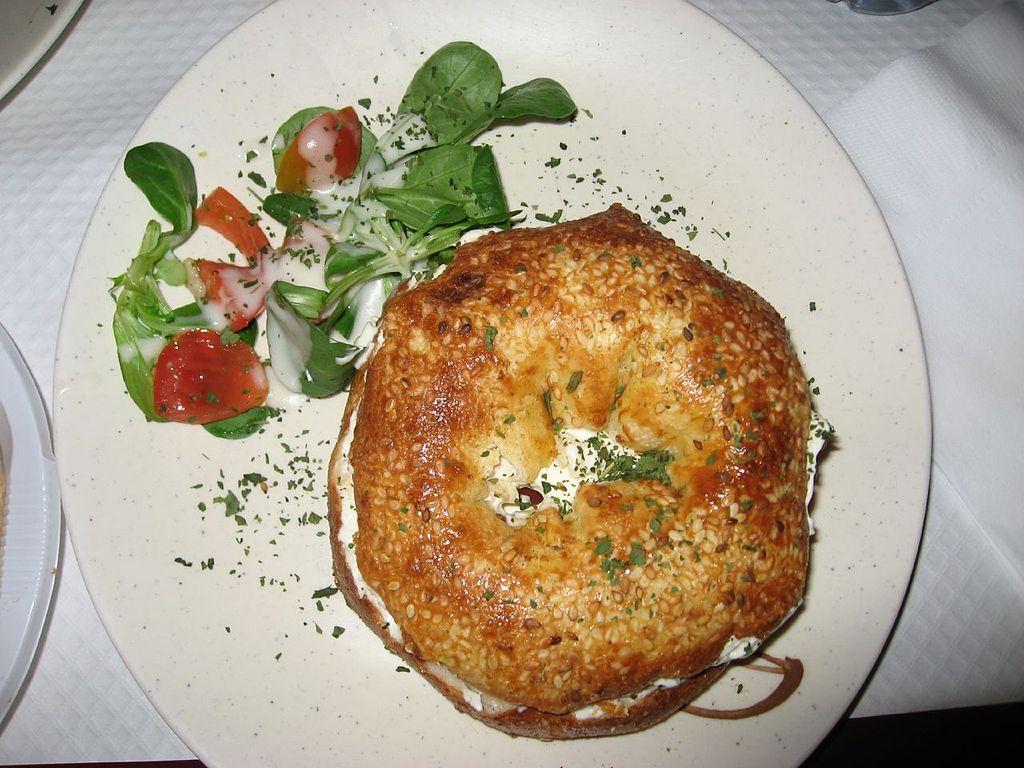 Philadelphia cheese is more of a texture than a taste, but it absorbs the flavours of other ingredients. When Philadelphia was used as a spread for bagels, it was an instant hit.

With a smoked salmon topping it soon became the favourite Jewish way of eating a bagel because it conformed nicely with Jewish dietary laws, which ban the mixing of meat and dairy products.

Bagels slit through the middle and toasted are also delicious when simply spread with lots of butter, honey or jam. Cheese and ham also make a good filling, although the ham isn’t kosher. They are also very special with pink roast beef or rare entrecôte steak cut into slivers.