Although I am not a sea person (I prefer mountain views) I have always liked eating at yacht clubs or in a restaurant that overlooks a quiet sandy cove…but only if it has a terrace in the shade.

I got a little bit of that last week when I went in search of a seafood paella somewhere along the coastline between Palma and Arenal.

Our first stop was at the end of Can Pastilla where a beachside restaurant I fancied was closed because their terrace is too small to make it worthwhile opening for the restricted times of 1pm-5pm. I’ll return when the interior dining room reopens.

So we headed further along the coast and ended up at Las Sirenas, next to the Arenal yacht club. I have known the name for decades but I’ve never got round to eating there.
Las Sirenas was open but their small front terrace beside the road was packed and we wouldn’t have got a table there. But they have a big terrace at the back overlooking the beach that I didn’t know about. They had a vacant table for two.

This terrace, which you can’t see from the façade, has what looks like a detachable roof, so it if suddenly rains, diners don’t get wet.

A mere glance at the menu was enough to see that prices are most reasonable — mussels a la plancha at €7.50 and cañas at €1.50. So I forgot about the paella and ordered three fish dishes instead — all of them done a la plancha. It was a good decision because it added up to a fine meal by the seashore.

There are many ways of cooking calamares (squid) and sepia (cuttlefish) some of them quite elaborate (stuffed calamares) and all of them Mediterranean and delicious.
But as with every kind of seafood, it’s the simplest of cooking methods that work best for calamares, which was why we ordered ours a la plancha. Just that, with no added frills of any kind except a wedge of lemon…which we didn’t use because the calamares didn’t need it.

Cooks have two basic ways of doing calamares or sepia a la plancha: for a short time over a high heat, or on a very low heat for a long time. Both methods give similar results and I don’t know which was used in this case.

But what was served were two calamares, nicely grilled to various shades of gold and sliced into rings, giving them attractive eye appeal they wouldn’t have if left uncut. They were tender but with that essential slight chewy texture that is the hallmark of a good calamar a la plancha.

Having had a superb steamed lubina (sea bass) the week before at Made in China, I went for lubina again, but this time a la plancha and finished off with a Basque refrito de ajos, which I wrote about at the end of last month. 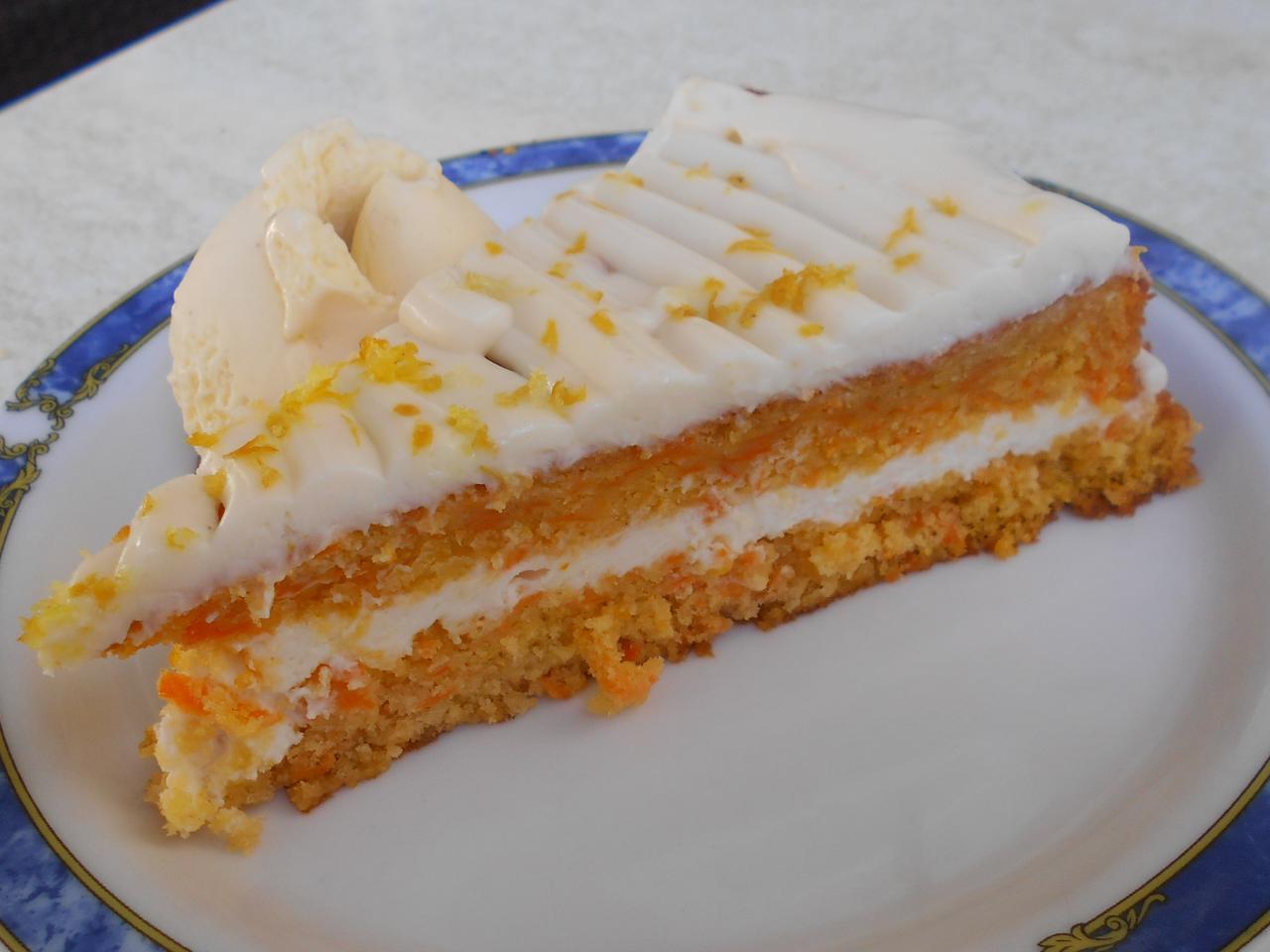 Both were farmed lubinas, which many people totally reject as being unfit for a connoisseur’s palate. But not me. I think they make very good eating.

The lubina here was especially well handled. The flesh of this fish is soft and smooth to begin with, so if it is even slightly overdone it is ruined and nothing can be done to save it.
But the cook timed it beautifully and the flesh was moist and flavourful.

The crisp garlic refrito was spot on and provided more taste as well as a nice contrast of textures.

None of us should be disdainful in any way about farmed fish: if the cook knows his job and his lubina, we’ll get a fine fish. That was what happened at Las Sirenas and at Made in China — and both lubinas were worth a 10-rating.

Pros and cons of cooking mussels

Most of the edibles that come from the sea are never cheap, or even come with a price tag the average person can afford…except for mussels. They are still a good buy at restaurants for the simple reason they are the cheapest item you’ll find at the fishmonger’s — most of those I see cost around €3-€4 a kilo.

A restaurant owner usually serves half a kilo per portion. As there are few overheads involved in getting the mussels to the table, even when they are charged at €7.50 there’s still a nice bit of profit going on the books. 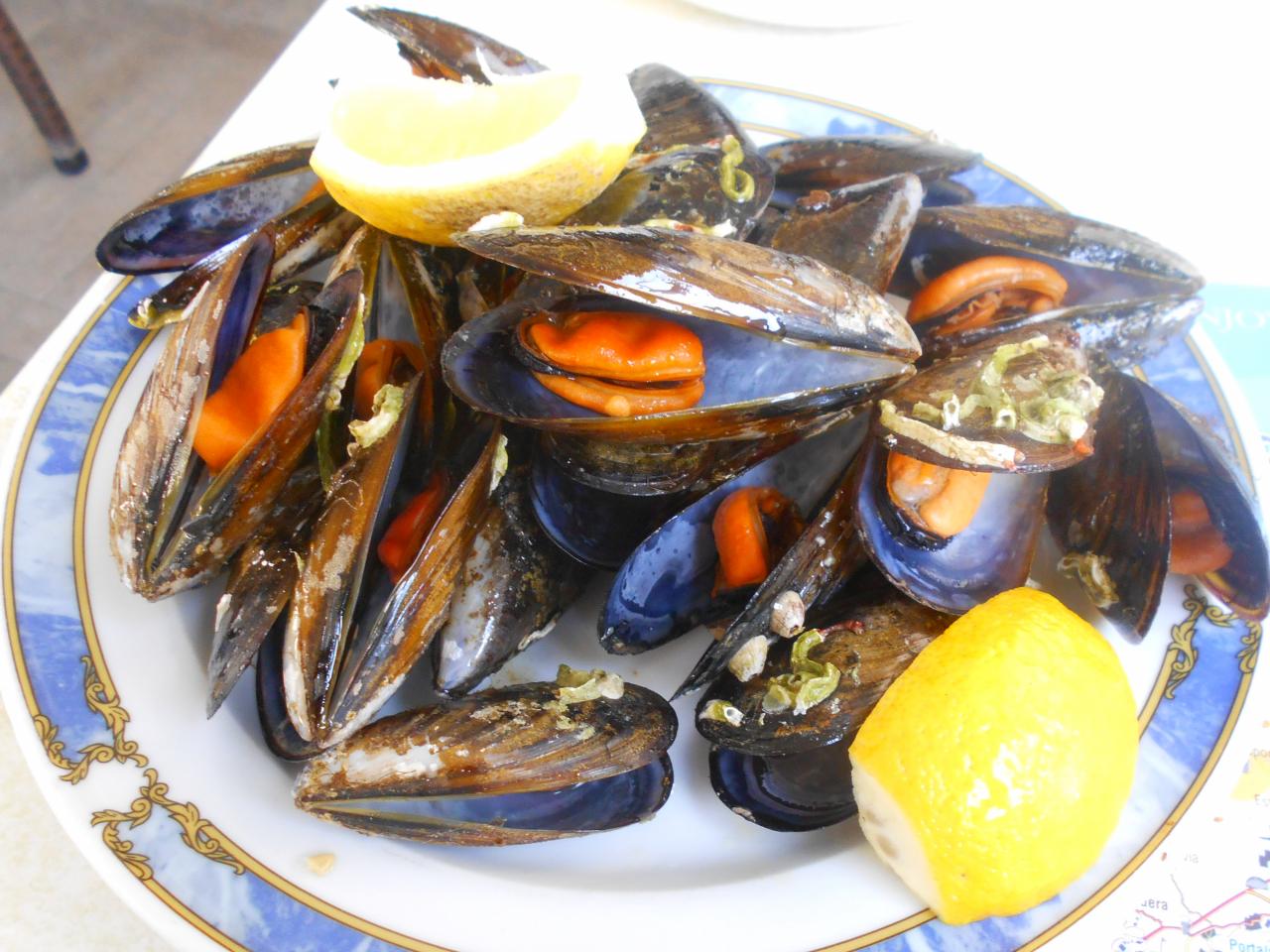 Even so, the majority of restaurant owners and cooks don’t do mussels — because in a busy place they represent a bit of culinary nuisance.

The actual cooking of the mussels is easy enough. The cook tosses a portion into a hot saucepan over a high heat, puts the lid on, vigorously shakes them about and in four or five minutes he’s pouring them on to deep plate or into a tureen. That’s plain steamed mussels and they will have a lovely taste of the sea.

Some customers prefer mejillones a la marinera, so the cook adds a splash of white wine to that preheated saucepan, a good three-finger pinch of finely chopped parsley and then vigorously shakes the mussels for five minutes.

A third way of doing mussels is to put them on to a hot plancha, and as they open pick them up with consummate care and transfer them to a deep plate or serving dish. It all sounds very easy-peasy and when doing them at home for four people there’s nothing to it.
It’s a different story when three cooks in a busy restaurant are perhaps looking after as many seven dishes at the same time and then get an order for a portion of mussels a la plancha. 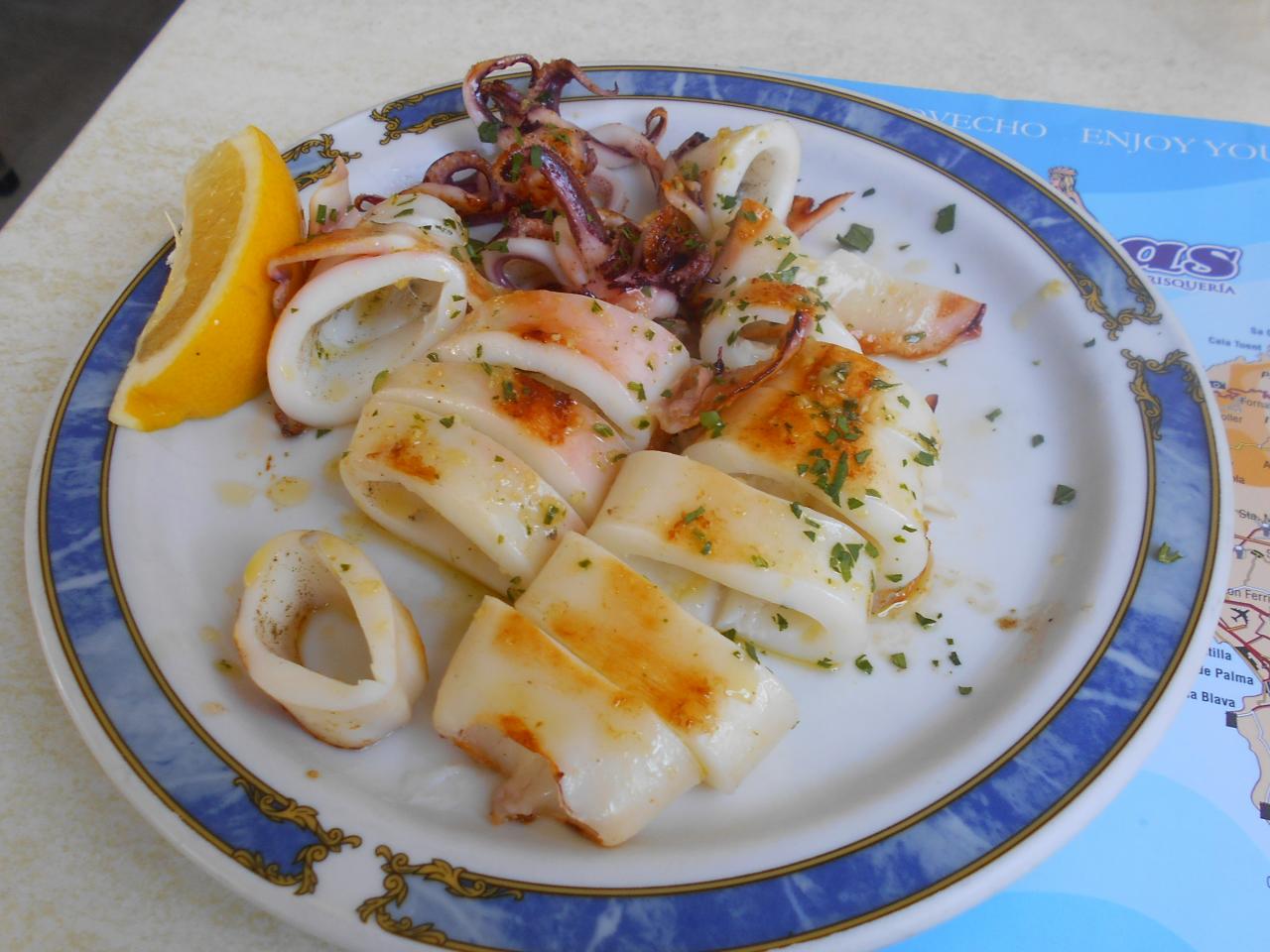 The cook’s problem with mussels is that, apart from cleaning them, they cannot be started off in some way: they must be done from scratch and they need the cook’s close attention. And as soon as they are cooked, the plancha has to be scraped off.

Of these three methods, the most fraught with pitfalls and perils is the plancha because the cook has so little leeway: he either gets it right or makes a mess of it. The cook at Las Sirenas got it right and the mussels were plump, juicy and with that all-important taste of the sea.

It’s always a lovely surprise to come across a fish place by the sea where the prices are affordable — which was why we ordered three seafood dishes done on a hot plate (a la plancha). Doing mussels this way is tricky because the cook has very little margin for error, especially in a restaurant as busy as this. 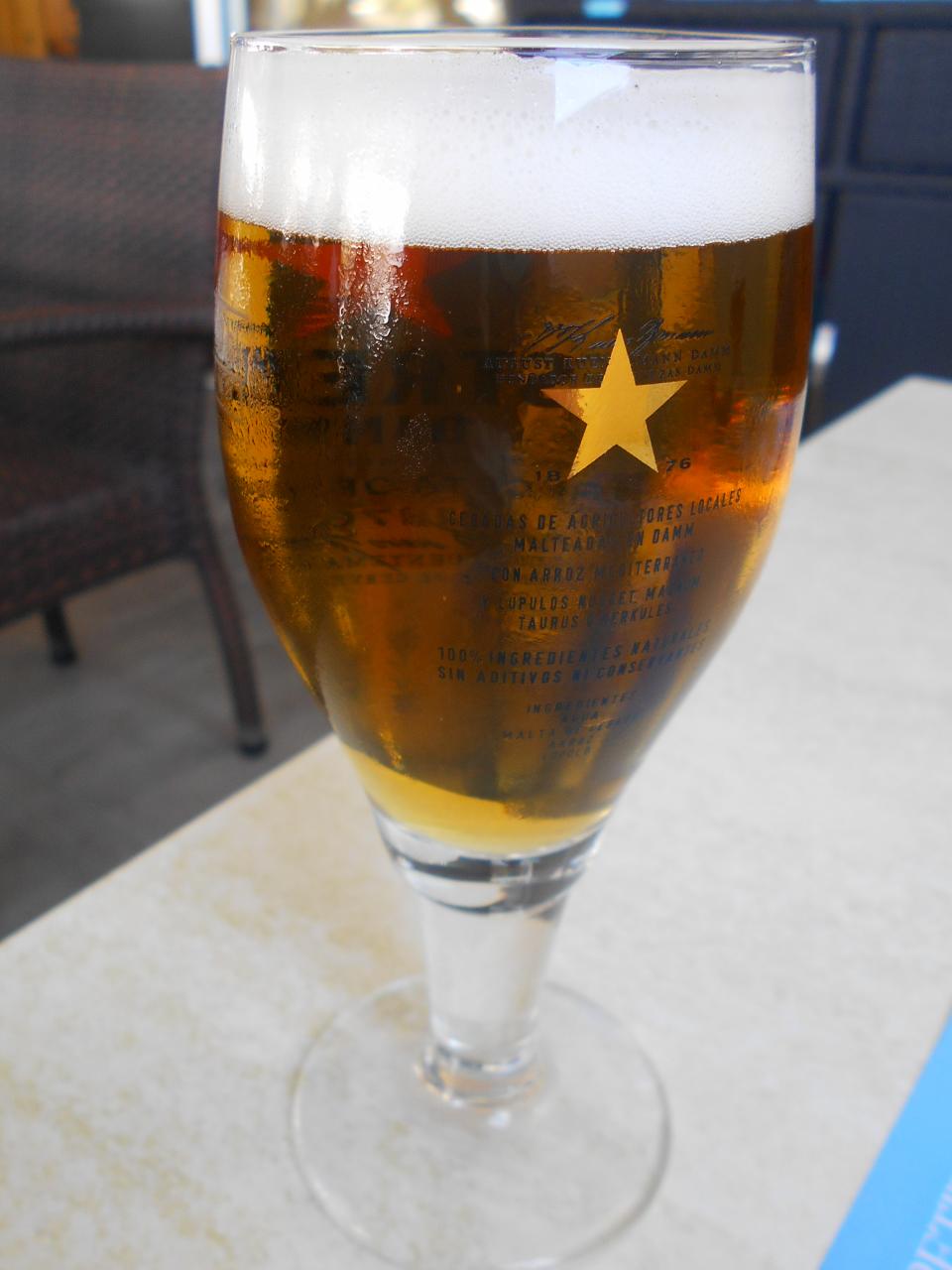 But he got it right and the mussels were plump and tasty. Grilling a calamar to get the best out of it is even dicier than doing mussels, but the cook timed it nicely and our calamar was tender but with that slight chewy texture that is the hallmark of a good calamar a la plancha. The lubina is perhaps the most difficult of the three because the initial heat must be high enough to get a deep golden colour — but the cook must ensure the fish won’t dry out. He hit the nail on the head and the lubina was worth a 10-rating.

Las Sirenas, Calle Roses s/n, s’Arenal. Tel:971-440039. Check for opening times. This place has been functioning for decades and has good prices (which means lower than in most other similar specialist restaurants) so they have a long list of highly satisfied regular customers. When a friend telephoned on Monday to book a table for tomorrow, they were already fully booked.