Spain has given the gourmet world some superb gastronomic treats ranging from cooking methods such as escabeche to memorable recipes for vegetables, fish and meat.

One of its greatest gourmet gifts is the cured ham from the special breed of Iberian black pigs that are reared in some parts of the country. These hams are already well known in Europe and in recent years their fame has started to spread to the United States, South America and even China.

The Iberian black pig is a breed found only in Spain, especially in Huelva, Salamanca, Extremadura and Granada. Connoisseurs rate the hams from Jabugo and Gijuelo as the very best.

As this pig has black paws (‘pata negra’, in Spanish) the best Iberian cured ham is known as ‘pata negra’. These two words have come to mean anything that is of the highest quality.

But some of the finest Iberian black pigs have white paws, so the ‘pata negra’ can be a bit of a misnomer and can lead to doubt and distrust.

The towns famous for their Iberian cured ham are usually at an altitude of 700 to 1,000 metres and the hillsides are covered with oak trees. The dry mountain air is essential for curing ham and the oak trees provide an important part of the black pig’s unique diet.

For part of its life the Iberian black pig is very much free-range animal that roams the hillsides looking for food. During the final stages of the pig’s life, the best quality meat comes from those that have fed on acorns from the nearby oak trees.

It’s the combination of mountainside mobility and the final diet of acorns that gives the hams from these free-range animals their special aroma and taste.

The hams from these black pigs are streaked with narrow seams of fat and it’s this fat that provides the exquisite taste of Iberian cured ham.

It’s one of the world’s most expensive fats and one of the very few occasions when we pay such an astronomic price for fat — and complain bitterly if it’s not there.

The Iberian black pigs go through three stages of growth. They start in stubble fields in low-lying areas and from there move to the lower hillsides where they spend time eating lupine plants. 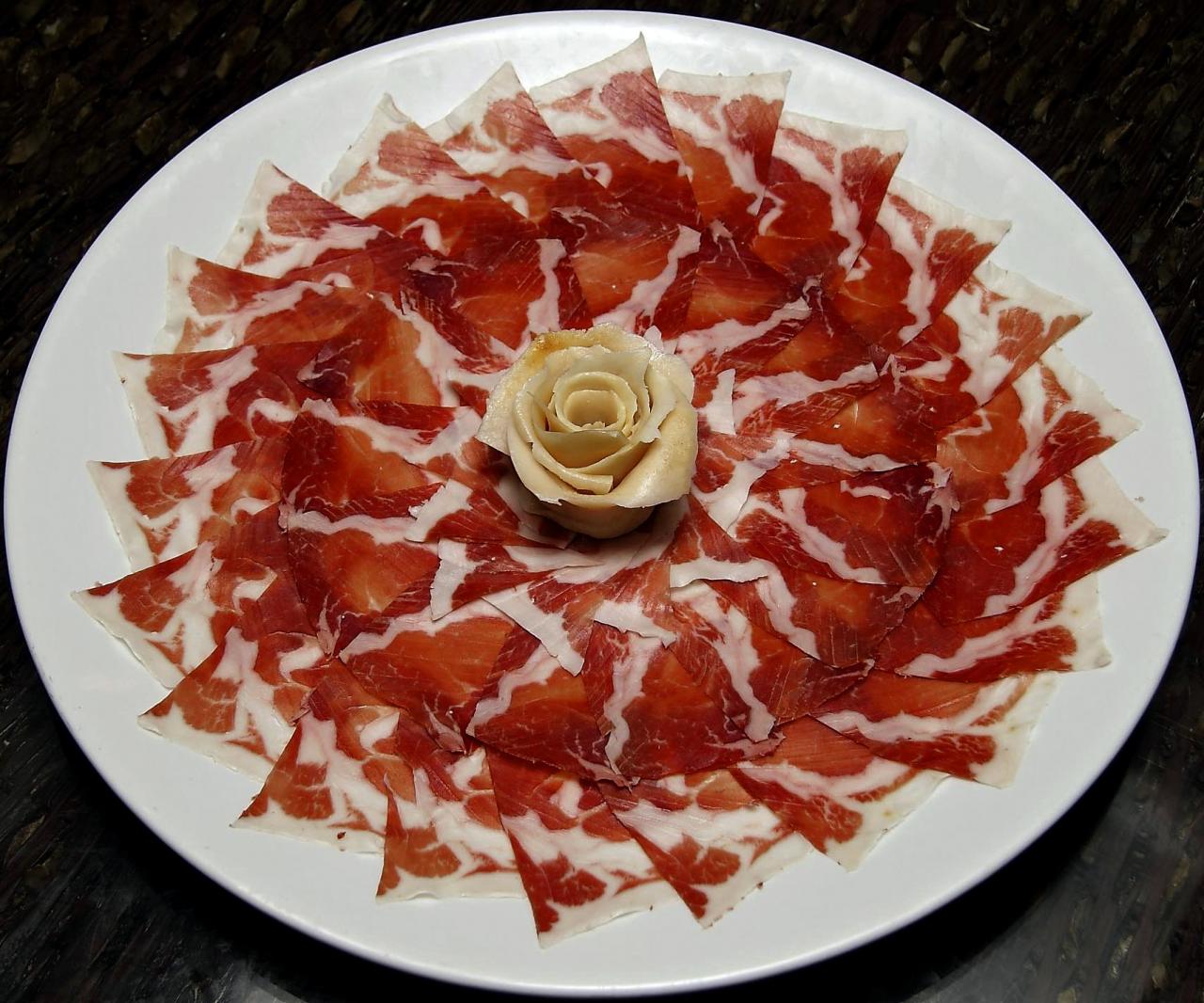 They are finally let loose on the upper slopes and begin their diet of acorns, called ‘bellotas’ in Spanish. It’s the acorns that give the fat its extraordinary off-white colour, aroma and taste.

The pigs’ diet is particularly crucial in the four months or so before slaughter because what they eat then determines the quality of the ham, of which there are three main varieties at the top end of the market. 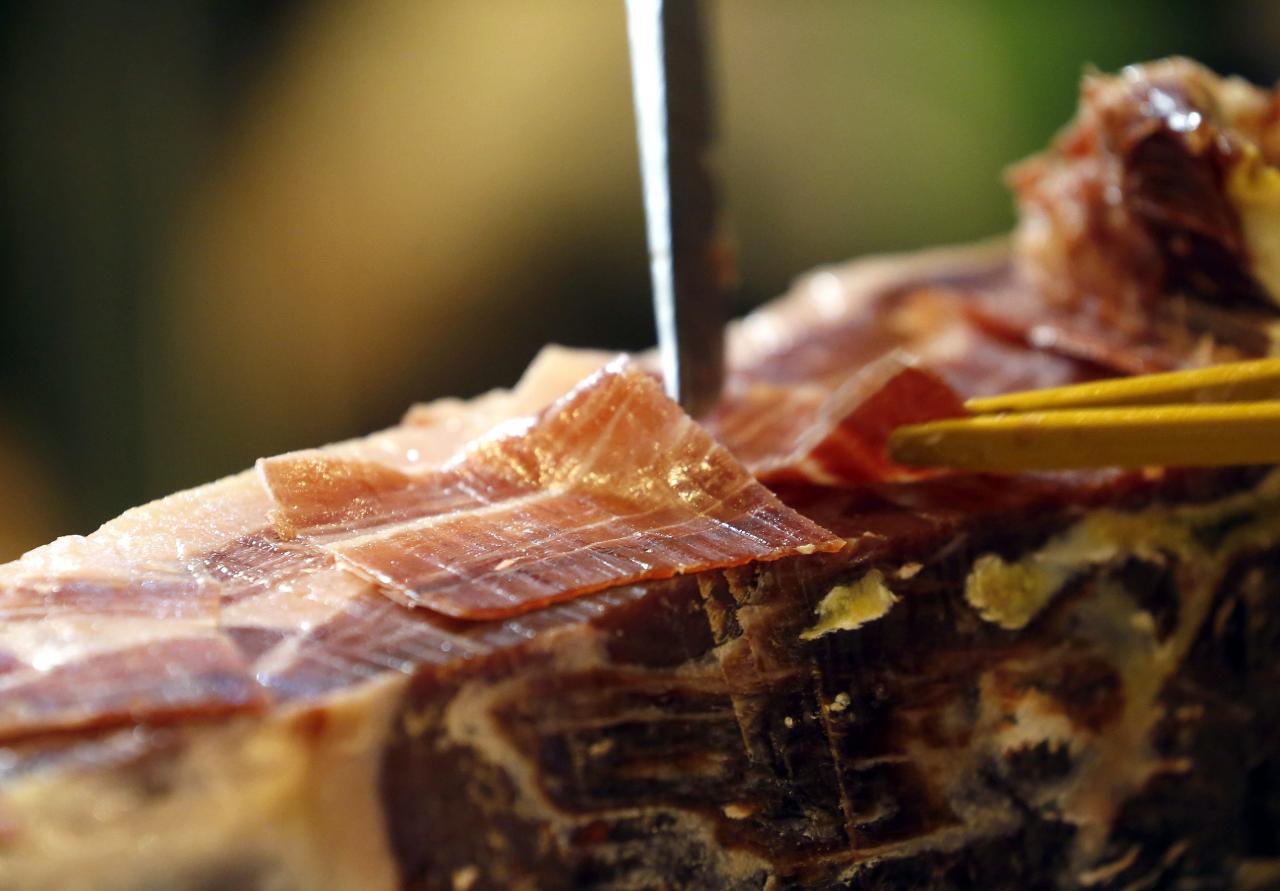 PIENSO: The black pig from which we get this ham eats fodder made up of cereal pellets, called pienso in Spanish. It costs much less to look after this animal and its ham is the most economical. The pienso category is a very good black pig ham but it isn’t in the same league as the other two.

RECEBO: This is the ham from the black pig whose diet during its last four months is a mixture of pienso and acorns. It costs more to feed and care for this animal and that means a considerable increase in overheads — making it much more expensive.

BELLOTA: This is the finest of all the Iberian black pig hams. In their final four months, the pigs eat nothing by acorns — as much as eight kilos a day. It’s this highly exclusive diet that produces the finest kind of fat and that’s what gives bellota ham is special cachet. At the wholesale stage, a bellota is twice as expensive as a recebo.

Few places sell bellota by the slice and when you find one that does, it will cost you €200 a kilo — €20 for 100 grs, enough for two small servings. And that’s the ham with most fat running through the lean.

But as you go down the scale there’s a huge range of prices to suit all pockets. If you intend to try some of the best ham, it pays to buy at up-market outlets.
A good starting point is the charcuterie section of El Corte Inglés in the Avenidas where they have a counter dealing only in Iberian cured ham and a couple of other high class pork products.

The best selection of Iberian cured ham in the Mercat d’Olivar is at is at Creus, the market’s largest charcuterie stall that also has a section with the best Iberian cured ham. This stall is easy to find. As you enter the market by the door in Calle José Tous Ferrer, Creus is the first stall on the left. 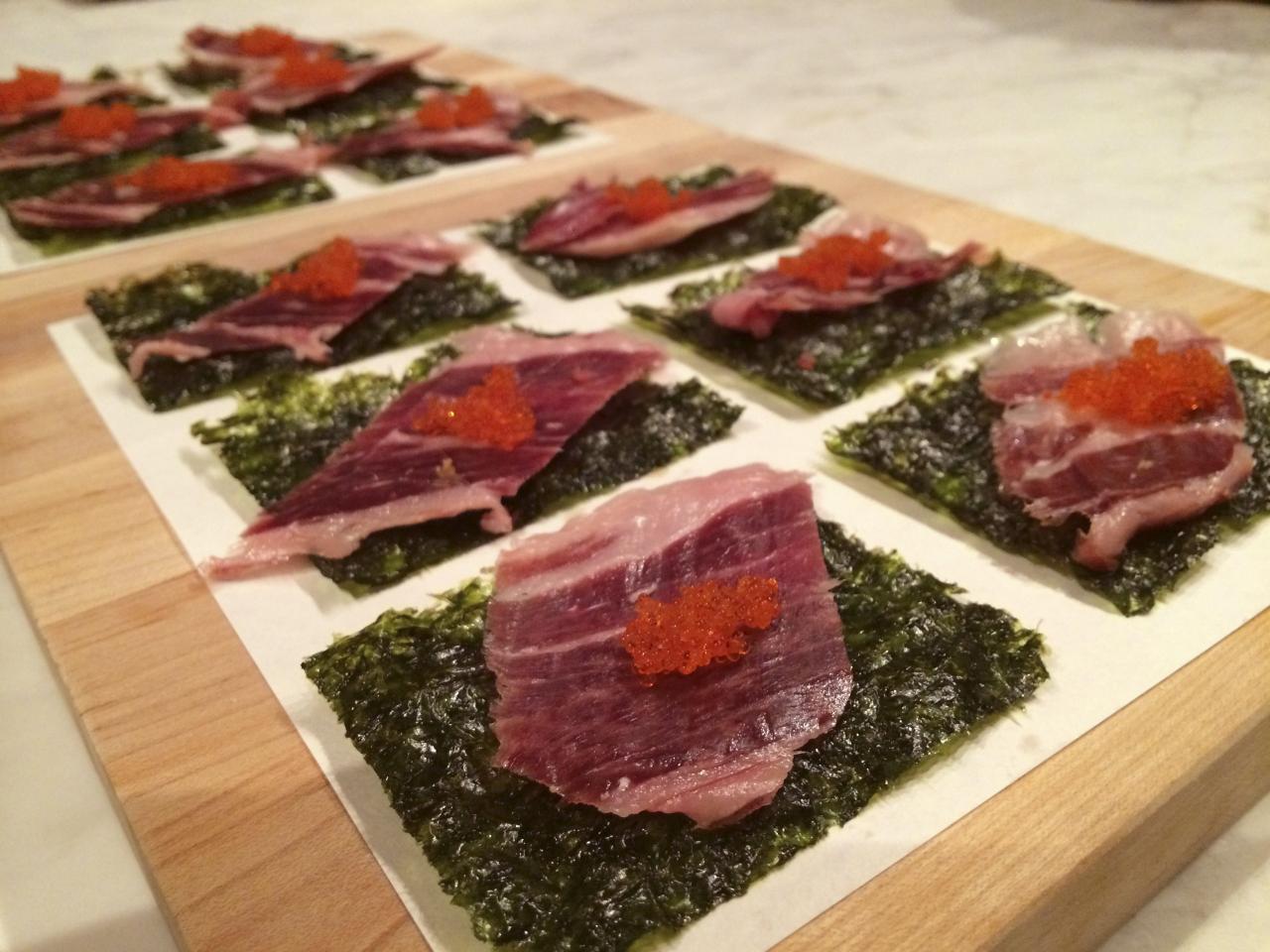 Just around the corner from the main entrance to the Mercat d’Olivar, at the start of Calle José Tous Ferrer, is a superb charcuterie shop appropriately called La Crème. They have an impressive range of national and international charcuterie and cheeses, plus a counter with top-of-the-market Iberian cured ham. Their finest hams on the bone go from €80 to €170 a kilo but they also have a wide range of other quality hams at much lower prices.

The Santa Catalina market has two excellent charcuterie stalls and the superior Iberian cured hams are at the long Izquierdo stall, at the left as you go through the Calle Anibal entrance opposite the Chantilly pastry shop.

As you do the rounds of the best charcuterie shops and market stalls, you will soon realise the most expensive hams, which also means the superlative ones, are those on the bone. These hams are always cut by hand and that’s what connoisseurs want.

You will also see some extremely fine ham with the bone removed that is cut by machine, but it never has the same cachet as ham cut by hand to order with special long knife.
Hams on the bone are always sliced as thinly as possible and in short narrow slivers. There is a good reason for slicing it this way: it tastes best of all when you can pick up a bite-size piece and pop it into your mouth.

The experts don’t want anything to accompany the best Iberian cured ham because they want nothing to come between the ham and their palate. They want the full taste of all that luscious fat.

Much of what we eat today wasn’t created by gastronomic geniuses of the Middle Ages but was born out of the sheer necessity of treating food products in a way that gave them a longer shelf life.

In the days before refrigeration and the existence of ice for kitchen use, one of the biggest problems facing housewives was how to keep fish and meat from putrefying and becoming inedible.

Every year rural housewives were faced with the difficulty of prolonging the freshness of the meat produced by the killing of the family pig. One solution was to give some cuts of pork a light salting. Other pieces were submerged in a strong brine and that kept them for a couple of weeks or more.

Quite soon some people realised that a heavier cure on the thicker cuts of pork, such as the legs and shoulders, not only kept the meat for longer, but also changed its consistency and taste. Those well salted cuts, which could be hung up in a pantry for years, eventually became known as cured ham.

Fishermen’s wives quickly realised salt helped to cure fish and kept it edible for several days. Sardines and similar fish kept well for a week with a light brine cure.

Some supermarkets today sell whole ungutted sardines that have had a slight salt cure. They are meant for chargrilling as they are, the flesh being taken off the bone without disturbing the innards. They are especially tasty and highly popular with sardine connoisseurs.

The same heavy salt cure that turned a leg of pork into ham, was also used for large specimens of cod. The cod’s tissues absorbed so much salt it could be kept for two or three years. This also changed the texture and taste of the cod and this salting method is still used because it is delectable way of eating this fish.

But today’s connoisseurs prefer lighter and shorter salt cures. The most modern way of salting cod is to do it in a carefully calculated brine over a matter of 24-48 hours and then freeze it at ultra low temperatures.

Some salt cod experts still prefer the old cure in which the salt is in direct contact with the flesh of the fish. I enjoy both types of salt cure but if I had to choose only one of them it would be the old method, with the cod being desalted sooner rather than later.

Fishermen’s wives had another way of preservation when their men came back with particularly large catches. The fish were descaled, gutted, coated with flour and fried in oil in which onions, carrots, bay leaves and peppercorns were sautéed. These ingredients were later doused with vinegar, the principal element in the preserving of the fish.

This method, which was applied especially to sardines and similar small fish, is called escabeche and it is one of Spain’s gifts to gastronomy.

Cooks later used the escabeche technique on mussels and today mussels canned in an escabeche sauce are a favourite way of eating this bivalve.

Those living in rural areas with access to pigeons and rabbits, also did them in escabeche and put them aside for future eating. Partridge, pheasant and other feathered game were also done in escabeche and today they are often featured in up-market restaurants.

Spaniards are particularly fond of escabeche food, partly because they like the taste of aggressive vinegars. But vinegar isn’t everyone’s pet taste, and for many people escabeche is definitely not a favourite dish.

Escabeche is never a good choice as a starter or mains when we are drinking a goodish wine: no wine can stand up to the assault of even a mild vinegar.

That’s the main reason I usually avoid escabeches — unless I’m drinking a cold beer. And the stronger the better.

Once the early humans had discovered fire and how to cook with it, they soon realised that smoke from burning wood was a superb way of enhancing the flavour of fish and meat. From there it was but a small step to observe that smoke also kept fish and meat edible for longer.

Nowadays we no longer have to preserve fish and meat by smoking it. But some of us are so hooked on the taste of smoked salmon, bacon, ham, pastrami, pork chops, duck and just about anything else that takes our fancy, that smoked food is a bestseller in supermarkets and restaurants.

Smoked food has become so popular that some restaurants specialise in it: everything they serve is smoked before it reaches the tables. Several big European cities already have these highly specialised eateries.

Much as I adore smoked salmon, bacon and ham, I most certainly wouldn’t want a meal based exclusively on dishes that has been given the smoke treatment.

So if some Mallorcan restaurateur decides to jump on a passing smoked food bandwagon I shan’t be phoning to make reservation. You can easily get too much of good thing — and that includes smoked food.