How to Brown Meat.

We sometimes say of people who cook well that they are born cooks. But no one is born a cook. Good cooks are made. In the best scenarios, some of us have a natural interest in cooking and possibly innate talent, and those are big assets.

But before we can become cooks and provide good food, we all have to learn culinary techniques, which are many and varied. Talent alone, in any field, is never enough: one also needs study, training and practice.

One of cooking’s simplest dishes is the soft-boiled egg. But there’s no single method to achieve a perfect one: someone had to work out technique and timing and others had to learn from them.

The same is true of fried eggs, scrambled eggs and the omelette: you have to learn the golden rules that lead to perfection. And that’s just eggs.

Then you have the basic cooking techniques required for boiling a ham, frying chops, sautéing mushrooms, roasting a chicken, or chargrilling a rack of pork spareribs.
They all have to be learned, not just for themselves, but because they enshrine essential knowledge that will be needed when making a wide range of other dishes.

Frying and sautéing are especially important because both are used in starting off dishes such as stews and casseroles. But it’s not enough to know how to fry and sauté — you will always get better results if you also realise why certain techniques are essential in the making of successful dishes.

If you want to turn out really succulent stews and casseroles, it is vital to be aware of what is happening when any kind of meat comes into contact with the high heat of a frying pan, grill or barbecue pit.

One way of learning anything is to draw conclusions from the mistakes of others. It’s a graphic surefire way of seeing how the right thing should be done.

The other evening I was at my daughter’s when she was preparing a stew for next day. She had put the meat into a greixonera and was annoyed when the meat, instead of frying and browning, quickly released a great deal of liquid and was stewing merrily in it.

My daughter, like many others the world over, isn’t always good at accepting fatherly advice. Several times I have explained to her the technique for browning meat when making a stew. But she pays little attention and commits the same mistakes over and over again.

Most cookbooks tell us that when preparing a stew we should fry the meat to sear the surface and seal in the juices. People who write that have completely misunderstood what happens when meat comes into contact with high heat.

As soon as cubes of meat hit hot oil in a frying pan, muscular tissue shrinks and the meat’s juices are forced to the top and underside surfaces where they escape. This is natural process and we can’t do anything to stop it. Nor do we want to stop it.

Whether we are doing chops or steaks to go from the frying pan to the plate, or frying meat as part of the preparation of stew, we use the same technique.

The meat must be fried over a high heat so the juices that naturally ooze out are immediately caramelised to form a crust round the meat. This forms a barrier that slows the loss of juice.

But plugging leaks is only part of what we are aiming for: the main effect we want is the intense flavour produced by that crust of concentrated juices.

Without that covering of the crunchy solidified juices, a fried or barbecued steak, or a stew or casserole, would be lacking in flavour. 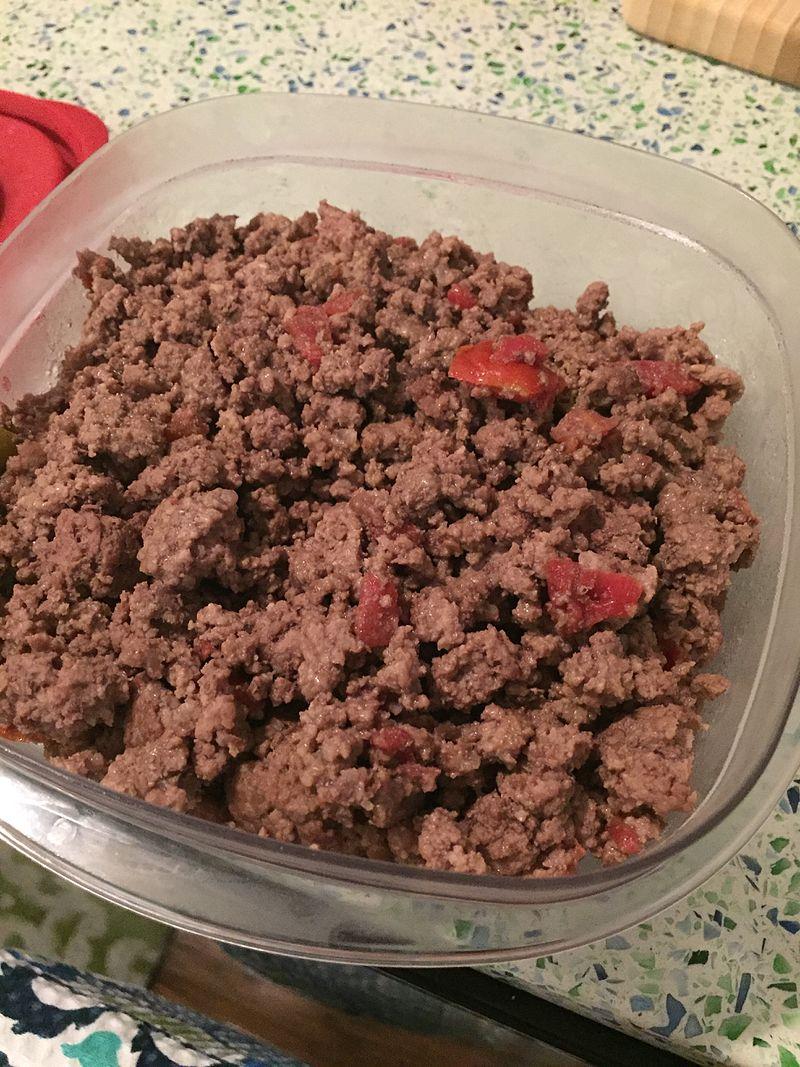 Meat fibres have no taste, because the flavour is in the juices. That’s why a piece of beef that has been simmered for three hours or more is a mound of tasteless fibres: the juices and their flavours have seeped out and are in the stock.

But when those cubes of stewing meat have been fried over a high heat and their seeping juices have caramelised to form a brown crunchy crust, we give them a terrific taste — and that means we have made a succulent stew.

The meat in the stew my daughter was preparing hadn’t even started to fry and was soon cooking in a big pool of boiling liquid. Where had she gone wrong?

Like many housewives nowadays, my daughter is in big hurry when cooking and frequently tries to cut corners. But you cannot take short cuts when browning meat.

The biggest mistake my daughter made was to tip a kilo of cubed meat into the hot greixonera and expect it to fry quickly and to take on a brown colour.

What actually happened was that the large amount of meat caused a sudden lowering of the temperature. Some of the muscle tissue eventually shrank, but when the juices started to run the heat wasn’t strong enough to caramelise them. So instead of forming a crust round the cubes of meat, the juices quickly produced a puddle of liquid in which the stewing meat started to boil.

Two weeks previously I had cooked the same kind of meat from the same butcher my daughter uses and I had no problem with it. It’s not that I’m a better cook, it’s simply that long ago I learned the rules as laid down in the chemistry of cooking.

And the golden rule in this case is that when we are browning meat we must to it in small amounts and in a very hot greixonera, frying pan or a wok.

When done this way, the droplets of juice pushed to the surface meet a searing heat that immediately caramelises them and turns them into a flavourful crust. 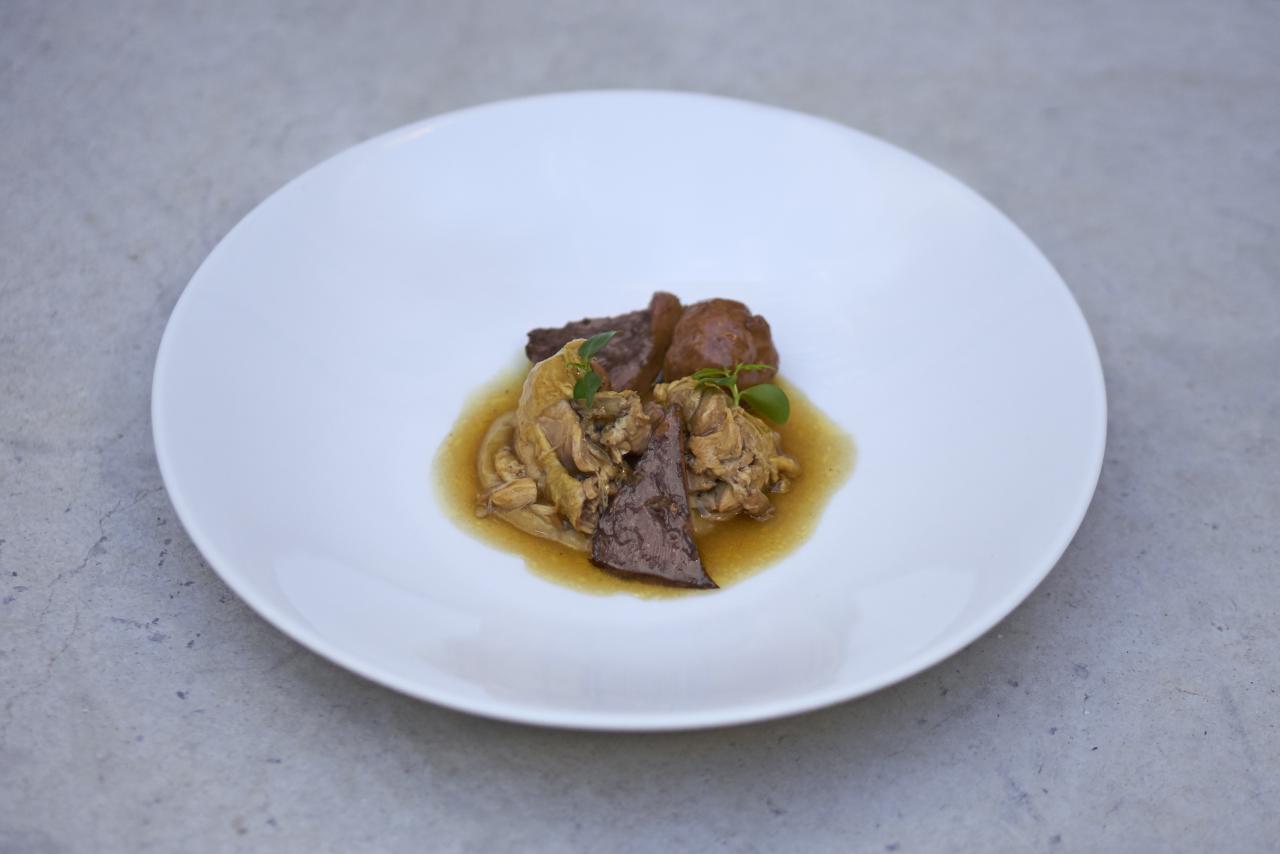 So the golden rule for browning meat is to fry it in a big frying pan over a very high heat.
My daughter will probably continue to cut corners and make the same mistakes, but anyone else should learn the rule and stick to it.