In nature, nothing sets the scene more beautifully than seeing a group of Rabbits running about at the edge of a field, where their floppy ears and white tails give them a very cute appearance. Everyone loves seeing a Rabbit, some gardeners and crop owners may despise them as they can cause some damage to the delicate shoots of plants and crops, but never enough to warrant their controlling.

Like duck and partridge, unfortunately they also make it on to the menu of a number of restaurants, and I for one could never bring myself to eat a duck, partridge or Rabbit, I have been brought up with nature and I couldn’t eat something I have grown to love watching. My opinions of those that do has not made me feel any less about them, although I do detest the so-called human with a gun, needlessly blasting them indiscriminately in the so called name of sport.

Rabbits are small mammals in the family Leporidae (along with the Hare), and although once considered a rodent, they diverged separately and earlier than their rodent cousins. They also have two extra incisors - something the rodents lack. Rabbits have been domesticated for a long time now, and in the Middle Ages they were kept mostly as livestock. 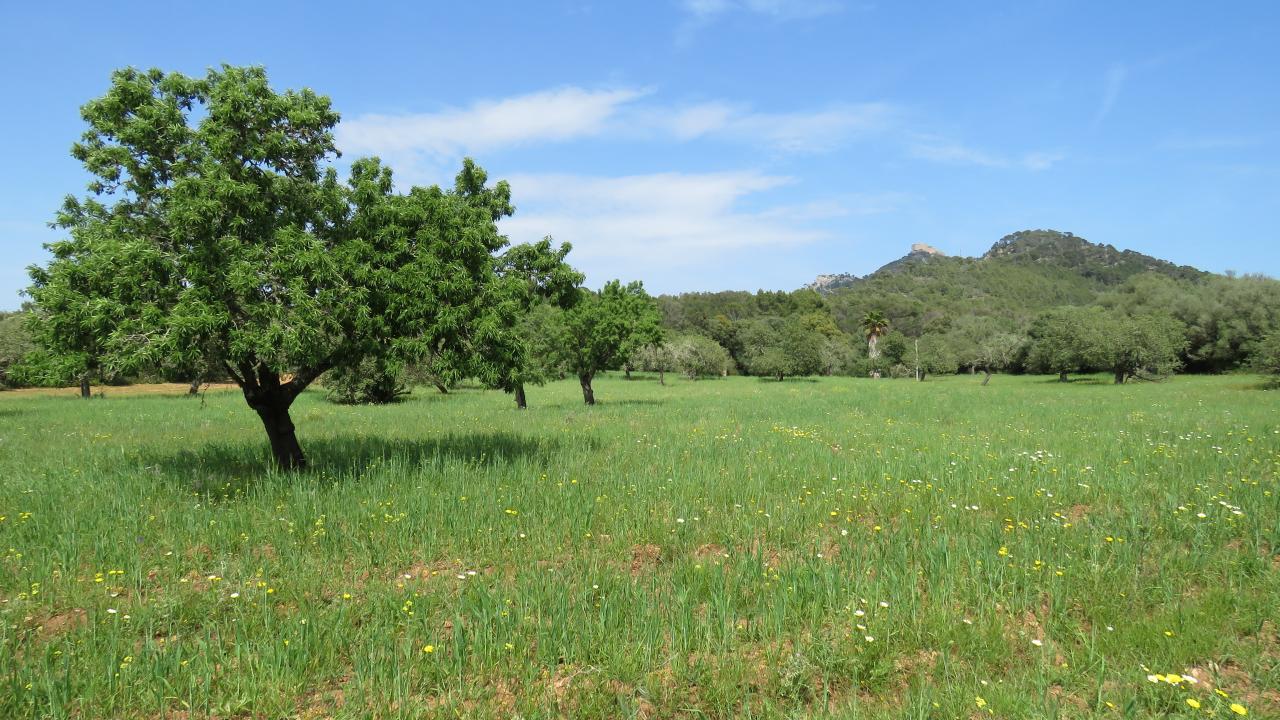 Records of this go back as far as ancient Rome, and it is believed that the Romans brought Rabbits with them to eat when campaigning in other countries, hence how Rabbits have turned up as an ‘introduced species’ to Britain for example.

From a buck to a bunny!

The male Rabbit is called a ‘buck’, the female a ‘doe’, an adult a ‘coney’ (derived from the Latin cuniculus) whilst the name ‘Rabbit’ once referred to the young animals only, with ‘bunny’ being another term for a young Rabbit. More recently, the term ‘kit’ or ‘kitten’ has been used to refer to a young Rabbit.

Generally, regardless of the age or sex we simply call them Rabbits, with children more likely to refer to them as ‘bunnies’ especially the domesticated pets with their floppy ears. A group of Rabbits however are known as a colony or nest, and sometimes even a burrow, although the latter refers to where they live. A group of baby Rabbits produced from a single mating is known as a litter.

Hares are precocial (born relatively mature and mobile with hair and good vision), while Rabbits are altricial (born hairless and blind). Hares live a relatively solitary life in a simple nest above the ground, while most Rabbits live in social groups in burrows or warrens. Hares are generally larger than Rabbits, with ears that are more elongated, and with hind legs that are larger and longer. Hares have not been domesticated.

Since speed and agility are a Rabbit’s main defence against predators, Rabbits have large hind leg bones and well-developed musculature. At rest they can be quite leisurely but Rabbits are on their toes while running, assuming a more digitigrade form. As they run away, they flash the white tail as a warning to other Rabbits of danger. They use their strong claws for digging and (along with their teeth) for defence. 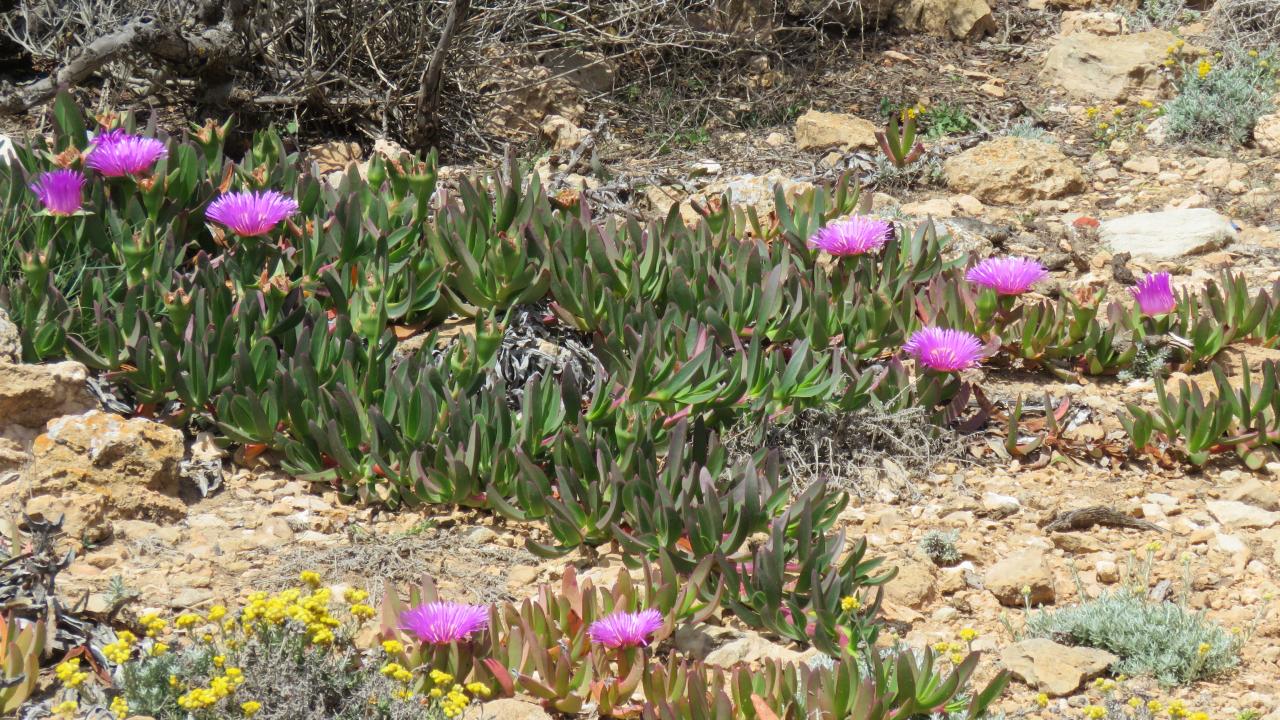 Each front foot has four toes plus a dewclaw. Each hind foot has four toes - but no dewclaw. They have a plump round body and a soft coat and as a result of the position of the eyes in its skull, the Rabbit has a field of vision that encompasses nearly 360 degrees, with just a small blind spot at the bridge of the nose. Once you have spotted the Rabbits, be assured they have already spotted you.

The fields that the Rabbit like to forage and run around in are also shared by a number of bird species too. Almost anywhere where I see Rabbits on Mallorca, there will be Red-legged Partridges close by, forming their social groups (or coveys) and feeding alongside the Rabbits. Like the Rabbit, upon seeing danger, they will run very fast into the deep cover at the edges of the fields, only venturing back out to feed once they feel it is safe to do so.

Open, stony fields are also worth scanning over for two small species of bird that feed on insects but can sometimes blend in well with the vegetation and rocks. One is the resident Thekla Lark, with its comical crest that sticks up like it has gone mad with some hair gel. Equally at home in this habitat are the summer breeding Short-toed Larks with their clean and creamy-white bellies. 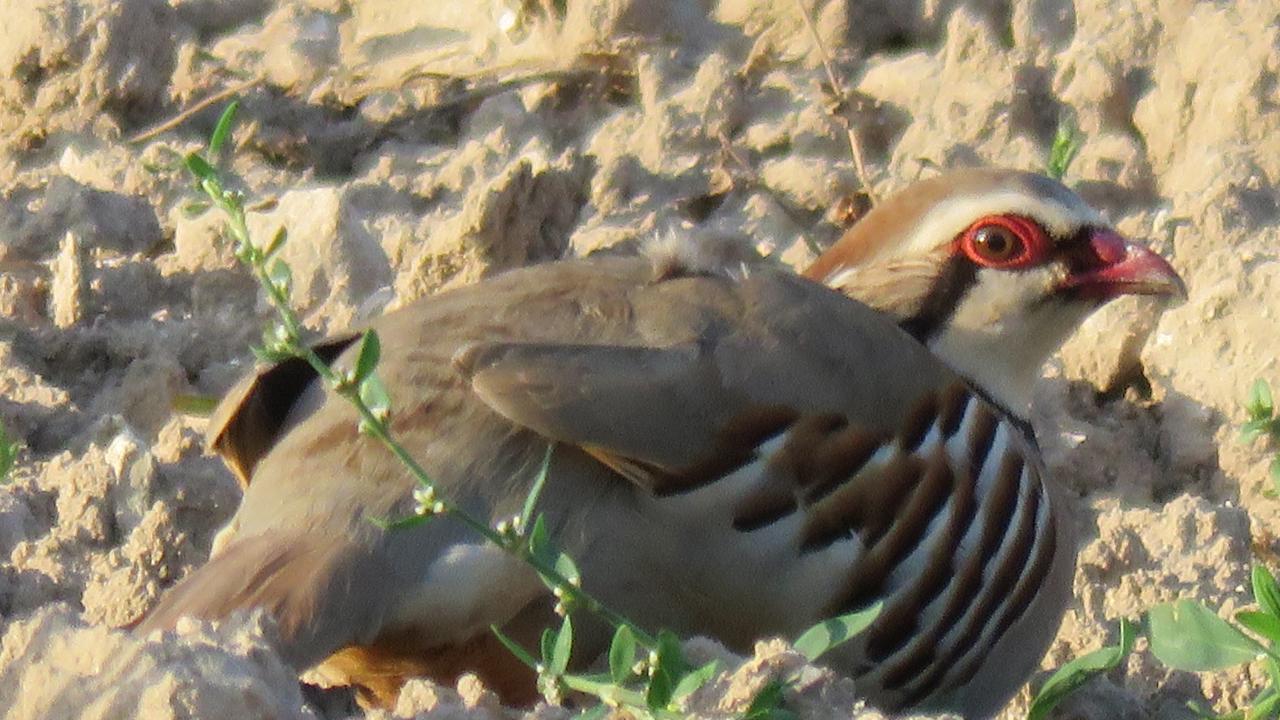 On occasion the summer breeding Tawny Pipit may be present, looking twice the size of the beforementioned birds but having striking ‘necklace’ like markings on the wings. Their ‘cherrie cherrie’ song always gives them away though. The long straight road leading down to Far de Cap Sellines will see areas marked ‘Passatgre’. The dry-stone walls and open fields around here have been reliable spots in the past for Rock Sparrows.

Where there are fields there will be the Pheasant too, with the distinctive long tail feathers. They like to patrol the edges of the fields but can sometimes be seen in the centres too. And it is always worth keeping a look out for the migrating Turtle Doves which add a lovely species to anyone’s day list. My favourite bird, the Hoopoe also likes fields to feed in, especially where there is some short grass where insects can be found.

An Iberian Wall Lizard will also make a welcome snack, especially if the Hoopoes have young in the area. At Es Trenc near to the salt pans in the south, the grass has been cropped short by feeding Rabbits, and around here small clumps of Hottontot Fig grow, showing off their large round pink-red flowers.

It makes for another lovely picture when there are Rabbits feeding amongst these plants, with the backdrop of the lagoons behind, and bird song all around. The Rabbit, despite being a beautiful creature, unfortunately still gets some bad press but is a very characteristic and comical animal. Next time you see some, sit down quietly and watch their antics for a while, they won’t disappoint.