They’ve got an awful lot of beef in Argentina, and it comes in a myriad of cuts that are unfamiliar to most Europeans: asado de tira, vacío, entraña, bife de cuadril, bife de lomo…just five of the more common ones. Argentinians also have restaurants called ‘parrillas’ that specialise in chargrilled meats.

At these places a favourite dish for beef lovers is the parrillada, a selection of popular cuts that can be chargrilled to order…plus starters of various kinds.
These specialist outlets also have a special offer called a ‘parrillada libre’: three or four chargrilled cuts and a couple of starters at a relatively modest fixed price that includes ordering as many of the cuts as you feel you can eat. It’s always a bargain…but strictly for beef lovers. 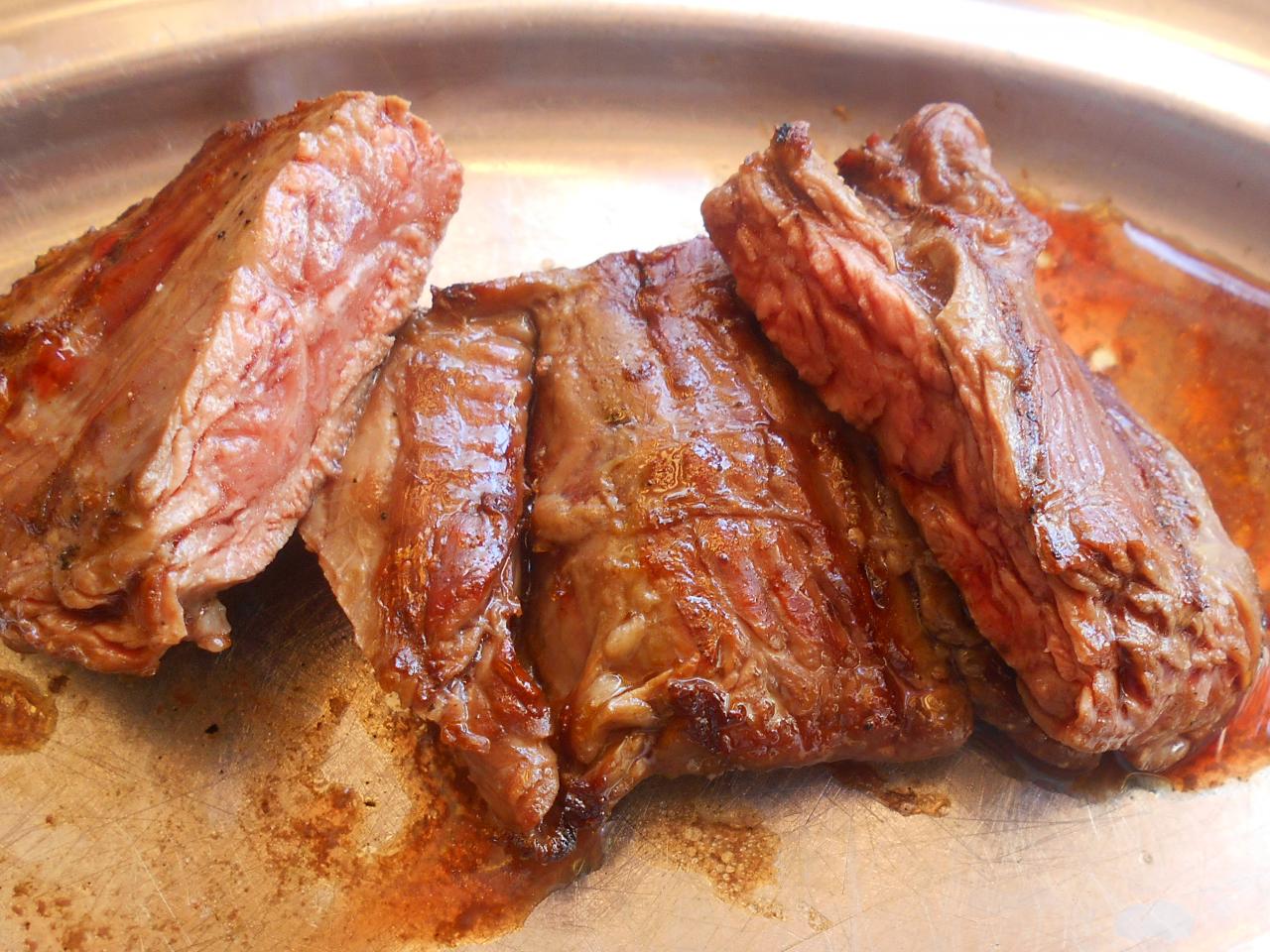 If you have any Argentinian friends you will almost certainly have been invited to an ‘asado’: the Sunday lunch that starts around noon and goes on for the rest of the day. The main part of the meal, you will have guessed, is a huge selection of chargrilled meats.

It was at a Sunday asado in Esporles some years ago that I heard Argentinian-born Mallorcan painter Rafael Amengual say: “I was told Roberto has become a vegetarian: he now has a salad with his one and a half kilo bife de cuadril.” (Rumpsteak). So it comes as no surprise when you read that Argentinians eat more beef per head than any other nation, including Uruguay, Brazil and the United States.

Last week I went to Parrilla Buenos Aires in Cala Major to have their parrillada libre — for €16.90 per person you get an empanada criolla, a chorizo criollo, a mixed salad, and as much as you feel like eating of asado de tira, vacío and entraña. That’s a great deal of food, but I did a repeat on the entraña. You can find out why on the next page. 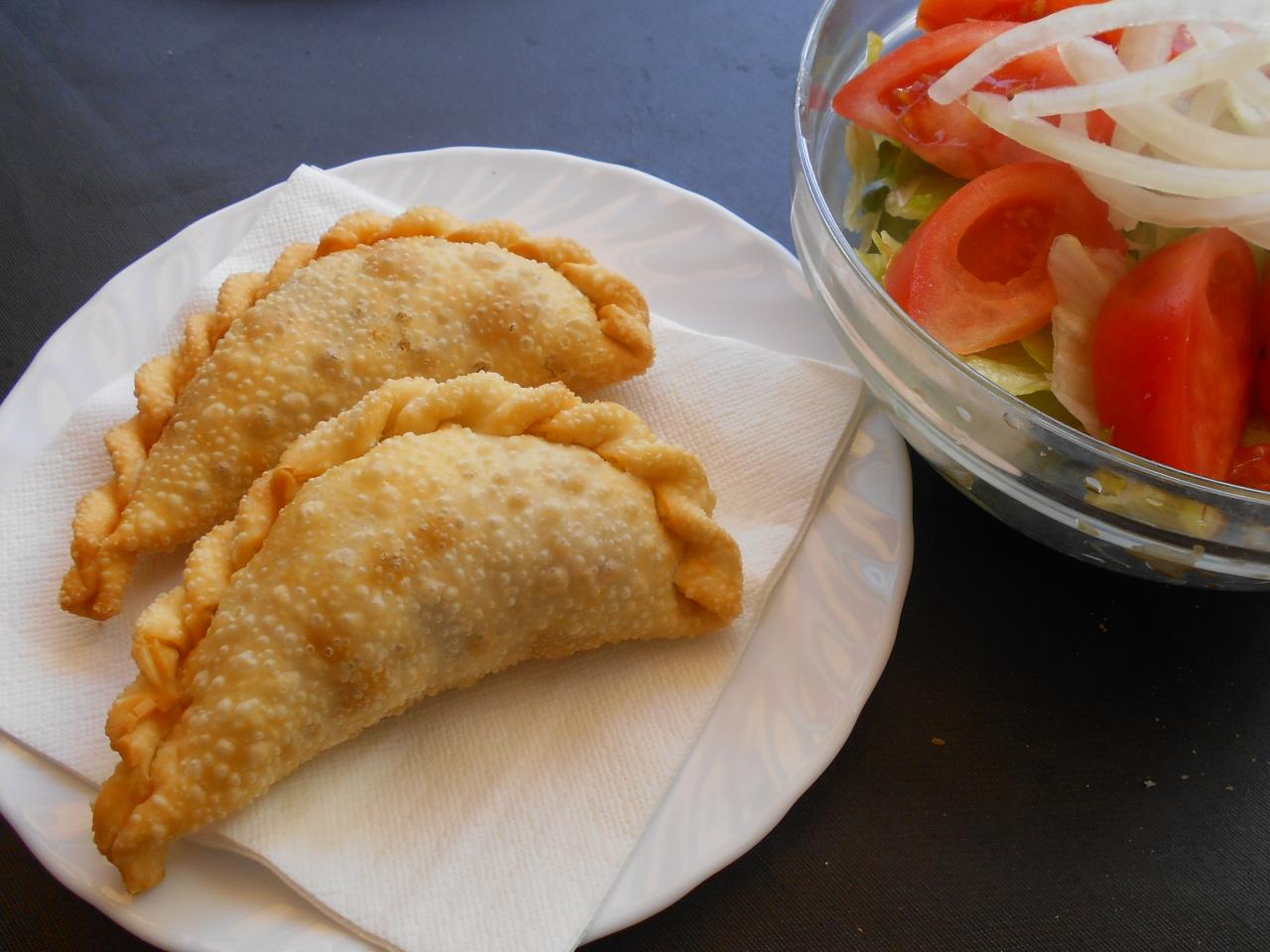 In every Argentinian restaurant I have visited, I have always ordered an empanada criolla — and sometimes two. This crescent-shaped pastry filled with scrummy minced meat, finely chopped onions and other veggies and with absolutely exquisite flavours, is one of the world’s great little dishes. I never tire of eating them.

This version was one of the best.

The chorizo criollo has nothing whatever to do with the Spanish chorizo, which is cured and heavily flavoured with paprika. A chorizo criollo is simply a thick fresh beef sausage. In this case it wasn’t a very good one. The filling was dense instead of loose, and it was grilled for too long and was somewhat dry.

The salad, on the other hand, was superb. It was just lettuce, tomato and sliced onion…but what perfection. I have never had lettuce as crisp as this nor a salad that was so deliciously cold. I ate it with relish and I didn’t hesitate in awarding it a perfect 10.

Many years ago, I can’t remember when or where, I was served an entraña that was dry and particularly tough. From that day on I avoided entrañas and never again ordered one. That was a mistake, as I discovered at Parrilla Buenos Aires when the chargrilled meats started to arrive at the table. 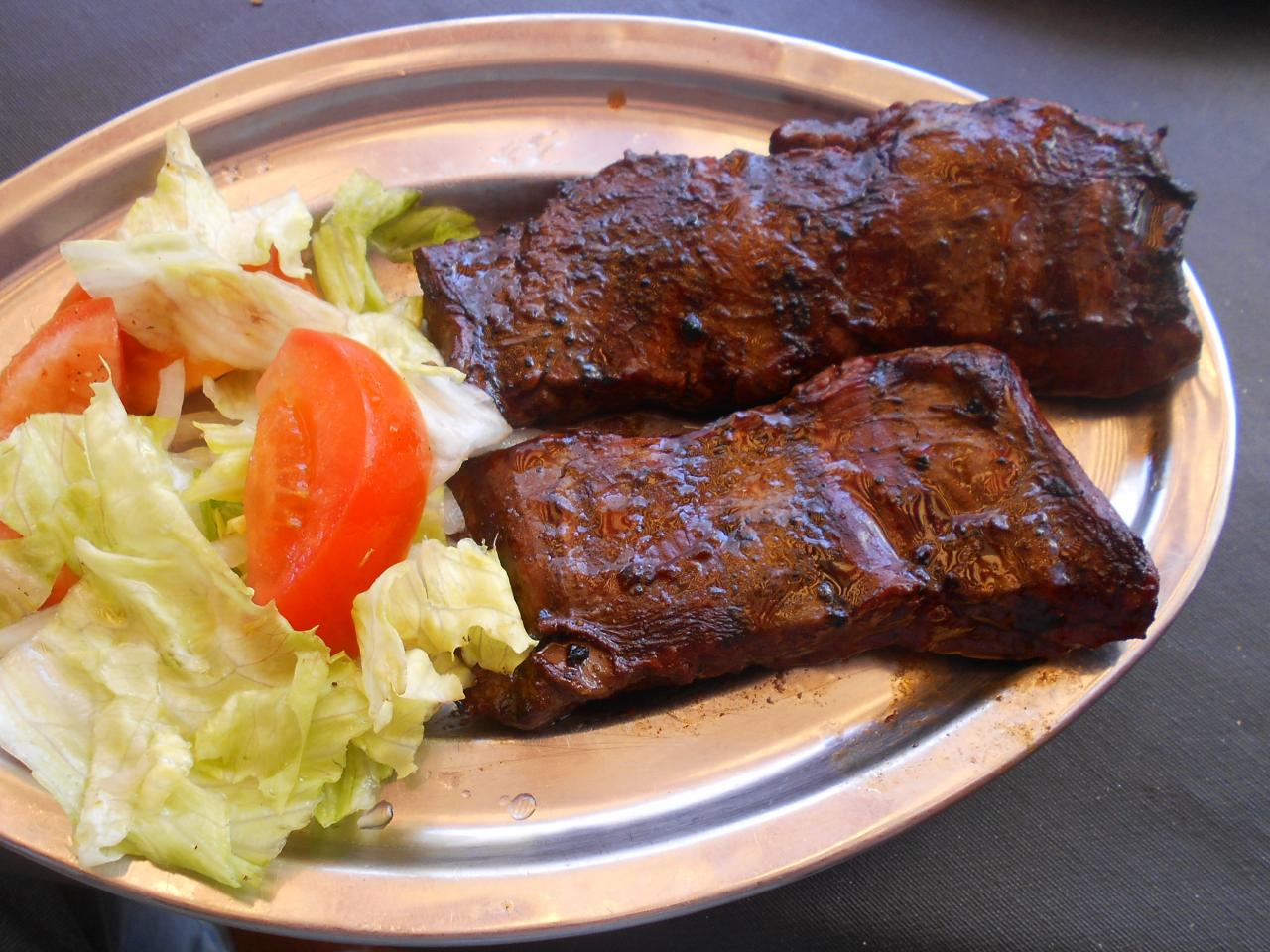 The entraña is a muscle situated in the chest of a cow, in the pectoral and abdominal cavities. It’s a long piece of darkish fibrous meat that is juicy and tender when chargrilled properly or done on a hot plate.

I wouldn’t have ordered entraña at Buenos Aires, but it was on the parrillada libre so I accepted it meekly and hoped for the best…which turned out to be a piece of meat with a 10 rating.

Be sure to order an entraña underdone

Our first entraña was more chargrilled than I like it but it remained juicy and was a tender and tasty chunk of beef. If only they hadn’t grilled it for so long, I thought.

When we had worked our way through the dishes on the parrillada libre, the waitress asked if we wanted seconds of any of the meats (there’s only one empanada per person) and I explained about the entraña being a bit overdone and not as good as it should have been. So I asked for a small piece that was really underdone. I repeated…really underdone.
Well, there was a nice bit of understanding between customer, waitress and kitchen and the slice of entraña that arrived was underdone…really underdone.

It was well charred on the outside, but pink and shining juicily on the inside. It packed a powerful gustatory punch and was as tasty and tender as the best entrecôtes.
This was Argentinian chargrilling at its best and this entraña was worth a 10. I’m already looking forward to my next one, so long as it’s underdone…really underdone.

Our first meat dish wasn’t in the same class as the entraña. It was an asado de tira, or ribs of beef cut across the bone so that you get a strip with four or five pieces of bone surrounded by meat. But this strip was too thin, had been cooked for far too long and was dry and on the tough side. 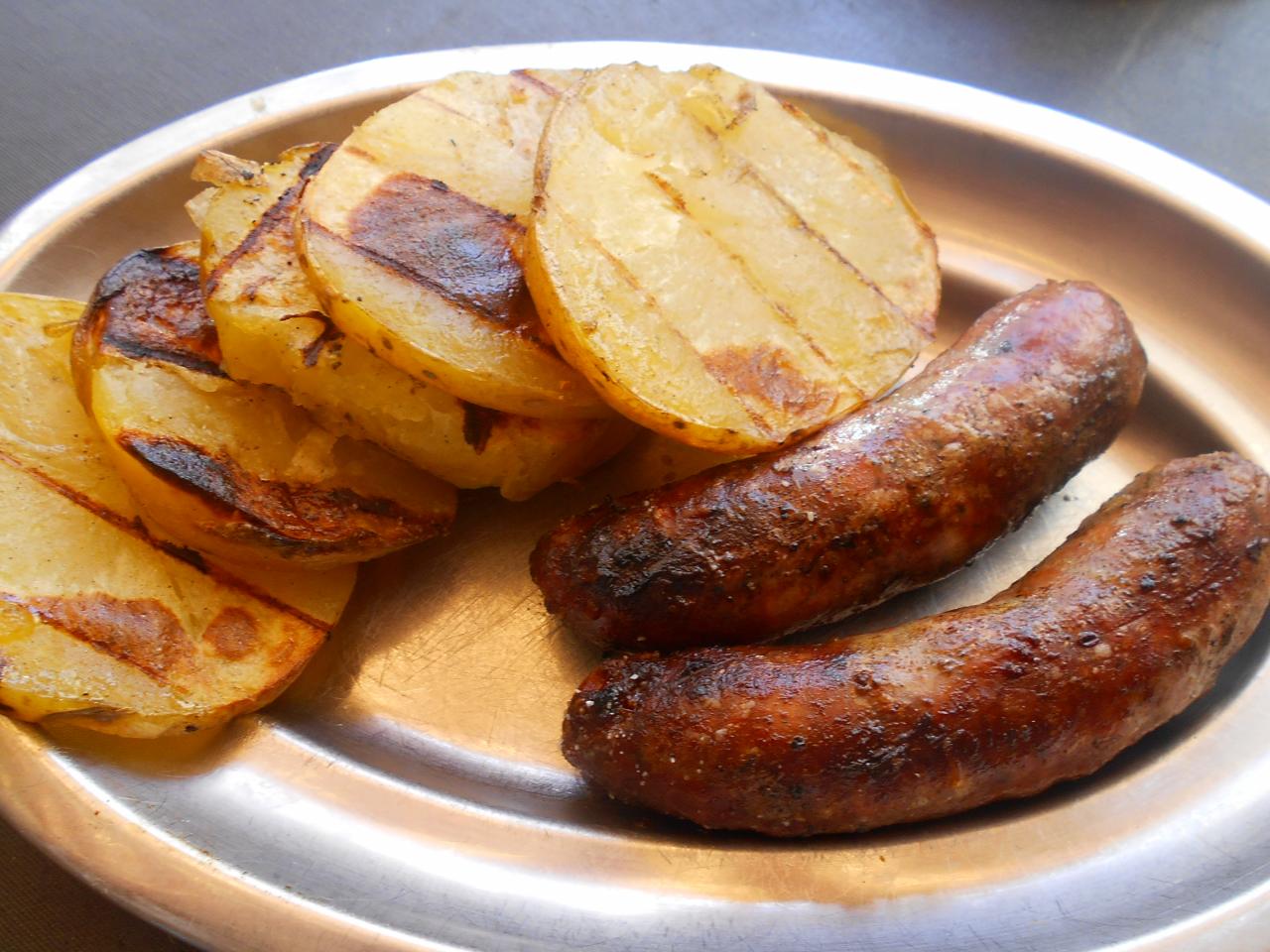 The vacío, a cut between the ribs and hindquarter, was much better but had also been cut too thin. It would have been better to have slices of the same weight but from a thicker cut: smaller but thicker slices make better chargrills.

I usually drink one caña but sometimes I share a second one. When the waitress realised we were splitting the final caña, she brought two half cañas instead. That smaller glass of freshly pulled beer is an ideal way to finish off a meal. 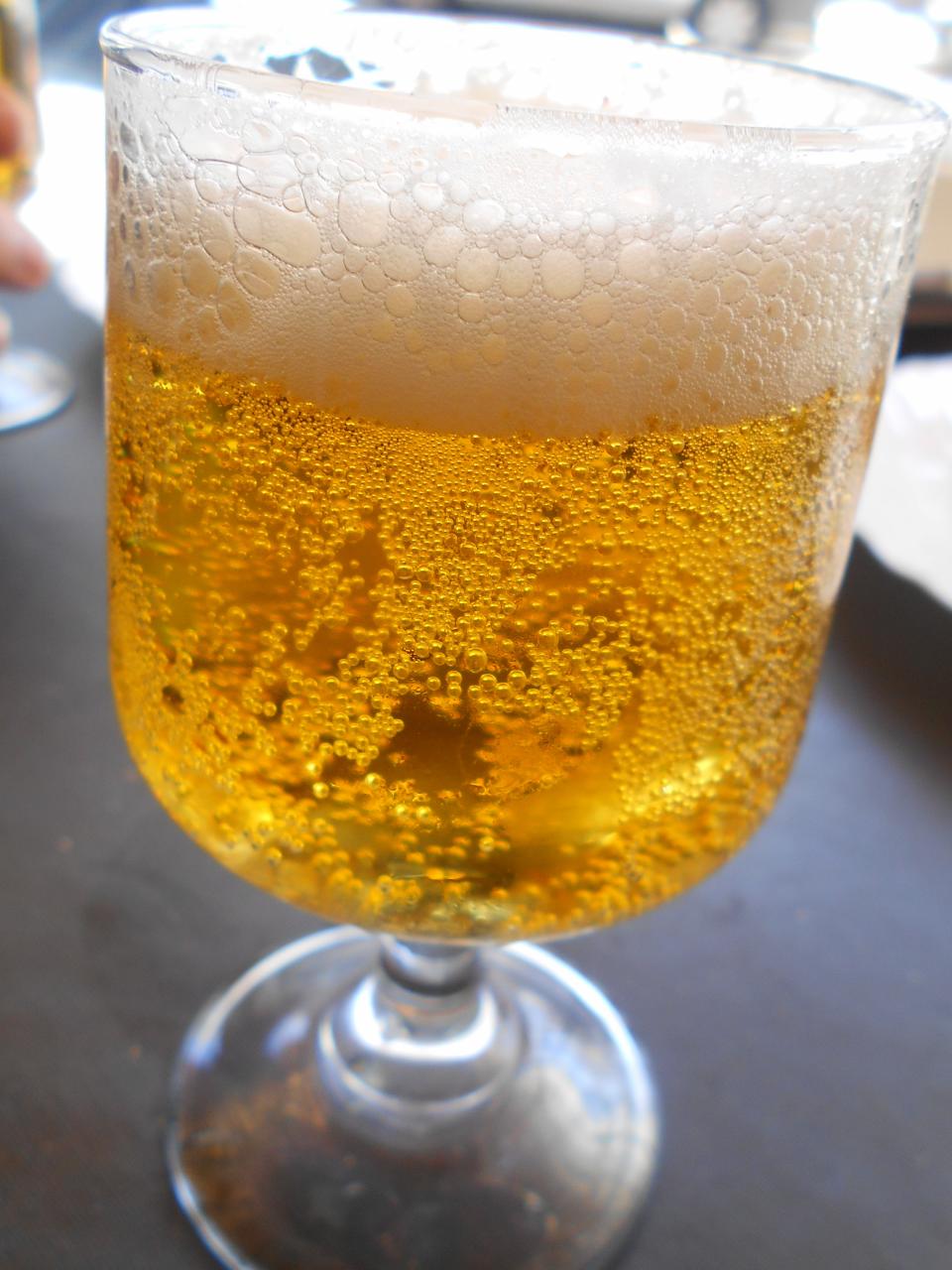 The most popular cuts of Argentinian meats are not in the same league as fillets, beef chops or entrecôtes but they are extremely tasty and make for superb eating so long as they are chargrilled properly. At Buenos Aires the cook was spot on with the entraña cut and it was a lovely piece of meat, so tender, so juicy and so full of flavour…which was why it was awarded a 10-rating. The asado de tira was cut thinly and had dried out by the time it got to us, so it was a disappointment.

The vacío was a good piece of beef and would have been even better had it been thicker — the same weight but a thicker slice. The empanada criolla was a splendid version, with a scrummy filling of minced meat and veggies. One of the best I’ve ever had. The salad of lettuce, tomato and sliced onion was the crispest, freshest and coolest ever…which was why it was also awarded a 10-rating.

Parrilla Buenos Aires, Avda Joan Miró 280, Cala Major, Palma (just after Hotel Nixe Palace, on the other side). Tel:971-401842. They have been opening from Wednesday to Sunday but with restaurants being allowed to open inside from tomorrow, it would be better to check opening times and closing days.

For "empanada criolla" you should read "Cornish Pasty"