Last week I trundled along to a garden centre for the first time in 18 months. Out in the open, yet still masked up, it was glorious. As I wandered between the verdant aisles I was reminded of that opening scene from the Gladiator movie, when a figure is filmed walking in close up, with a hand drifting and touching the tops of the long meadow grass.

The garden centre was virtually empty. And it was breathtaking to be surrounded by so much of nature’s colourful best. I know people are sick of hearing how ‘lupins in lockdown’ have saved their sanity; but in truth, the serenity of a garden, and the handling of plants along with the satisfaction of watching them grow is truly inspiring. Well, for me it is, anyway.

However, the collective calm and peaceful harmony of the nursery was soon challenged by a rather childish and petulant outburst from a free thinking radical, who bustled past as we loaded a veritable Eden into the back of our car.

“Bloody masks!” The woman cursed as she climbed back into her muddy Range Rover, having just been denied access for not wearing a face covering. Her choice! But when the wearing of face masks is still obligatory, even in the open air of a garden centre, what surprised me most was how astounding it must have been for this radical, self indulged Covid denier to realise that she wasn’t so special after all!

Surely, Ms Angryknickers must have experienced many an occasion and refusal of admittance like that, especially if she’s been crashing her way through lockdown life with her own self imposed agenda, disregarding all rules and government regulations! If wearing a face mask gets you entry to places you want to visit, then just do it.

Wearing a face covering doesn’t really hurt, does it? Is it really so difficult or painful to comply? Really ? So just wear one. Or simply shut up, stay home, and stare at your empty flower pots! It’s not forever, and the choice is absolutely yours! We were happy to wear face masks and felt blessed to be able to browse and buy at peaceful leisure in a protocol safe venue away from the likes of Angryknickers!

Planting out all the new and colourful specimens was again, a simple joy. The snails thought so too! I know that every creature on God’s sweet Earth has a purpose (even non mask wearers), but I struggle to see the purpose of a brown shell that simply devours three times its body weight in ‘new shoots’ at each feeding frenzy. Sad to say, snails are just not welcome in my gardening world. 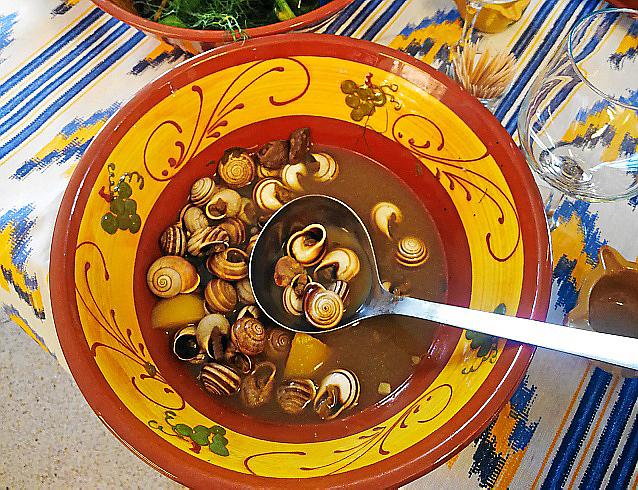 Crushed eggshells scattered around plants are supposed to be a snail/slug deterrent, so for weeks I have been saving my used eggshells, drying them and crushing them, until I collected a small yet generous sackful. I sprinkled the shells with gay abandon and waited.

The snails didn’t seem at all phased by their new mosaic playground, so I looked online to see what the great Googlers of the world had to say. I found a very interesting experiment on YouTube, where a keen gardener had made a circle of crushed eggshells, and placed a handful of snails and slugs within the circular barricade.

The entire experiment was filmed using a time-lapse video, and when played back, most of the snails were seen happily skating across the shells with no ill effects whatsoever. Some were showing off and deliberately going back and forth like some kind of Hindu fire-walkers. So much for shellshock! Another old wives tale bites the dust!

Copper wire wrapped around pots is supposed to be another deterrent, as apparently copper gives the little blighters an electric shock when they pass across it. And in case you were wondering, the wire doesn’t need to be plugged in. It’s all in the chemical reaction.

I don’t sit comfortably with the use of slug pellets, organic or otherwise, so am now trying an alternative, caffeine craze. Sprinkling coffee grouts in your flowerpots is supposed to keep the snails at bay. It might work. But if it doesn’t, at least the garden will smell like Starbucks. And if I close my eyes I could easily be on a crowded terrace somewhere, like back in the good old days! 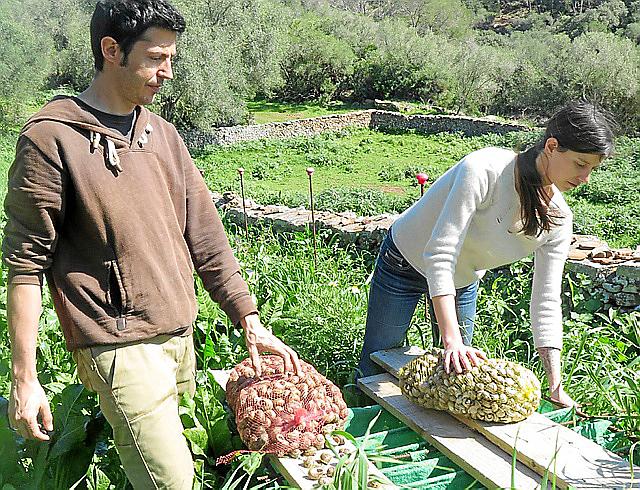 I am not a huge fan of snails, either as pets or a culinary treat. Yet here in Mallorca they are a delicacy that locals go bonkers for! In all honesty, I think I was totally put off by my very first ‘escargot’ experience in France, back in the 80’s.

The traditional marriage of ‘gastropod’ and garlic is exactly the same here as it is in France, but in my opinion, a totally different chew. The French snails I encountered were rather tougher than their Mallorcan cousins, and required a lot more mastication. Their shells weren’t quite as pretty as ours either!

The French snails were also a lot larger in size, and once I had wrestled them out of their shells, I was confronted with something the size of a baby’s arm. Quite scary on a fork! Perhaps I it was merely a bad, random experience, but sadly the memory stuck.

My first culinary experience of Mallorcan snails was in a mountain restaurant when I encountered one doing backstroke across my bowl of ‘arroz brut’, even though I had been assured there were no snails in the said dish! You just can’t trust some people, can you! OK, so it wasn’t exactly swimming, but it was definitely bobbing up and down between the chanterelles!

I decided to take the plunge and eat it. “But it’s got little antlers,” said Other Half, trying to put me off. “And it looks like it’s smiling!” It DID have little antlers, but it was so not smiling. In fact it looked a bit miserable! It was well and truly cooked. It was also very soft, very tender and quite delicious, encouraging me to actually ‘go local’ and order an entire portion.

Now, there are portions, and portions, each being a measure of your own personal capacity to enjoy. Mine, I quickly discovered, maxed out at around six. Six baby boomers, small and tender, were just about right, dipped in garlic mayonnaise, and helped down with a generous ‘copa’ of red wine. I often watch in total awe and admiration as locals, including small children, consume entire mountains of Mallorcan molluscs without flinching, evicting them skillfully from their shells with a quick flick of a cocktail stick. 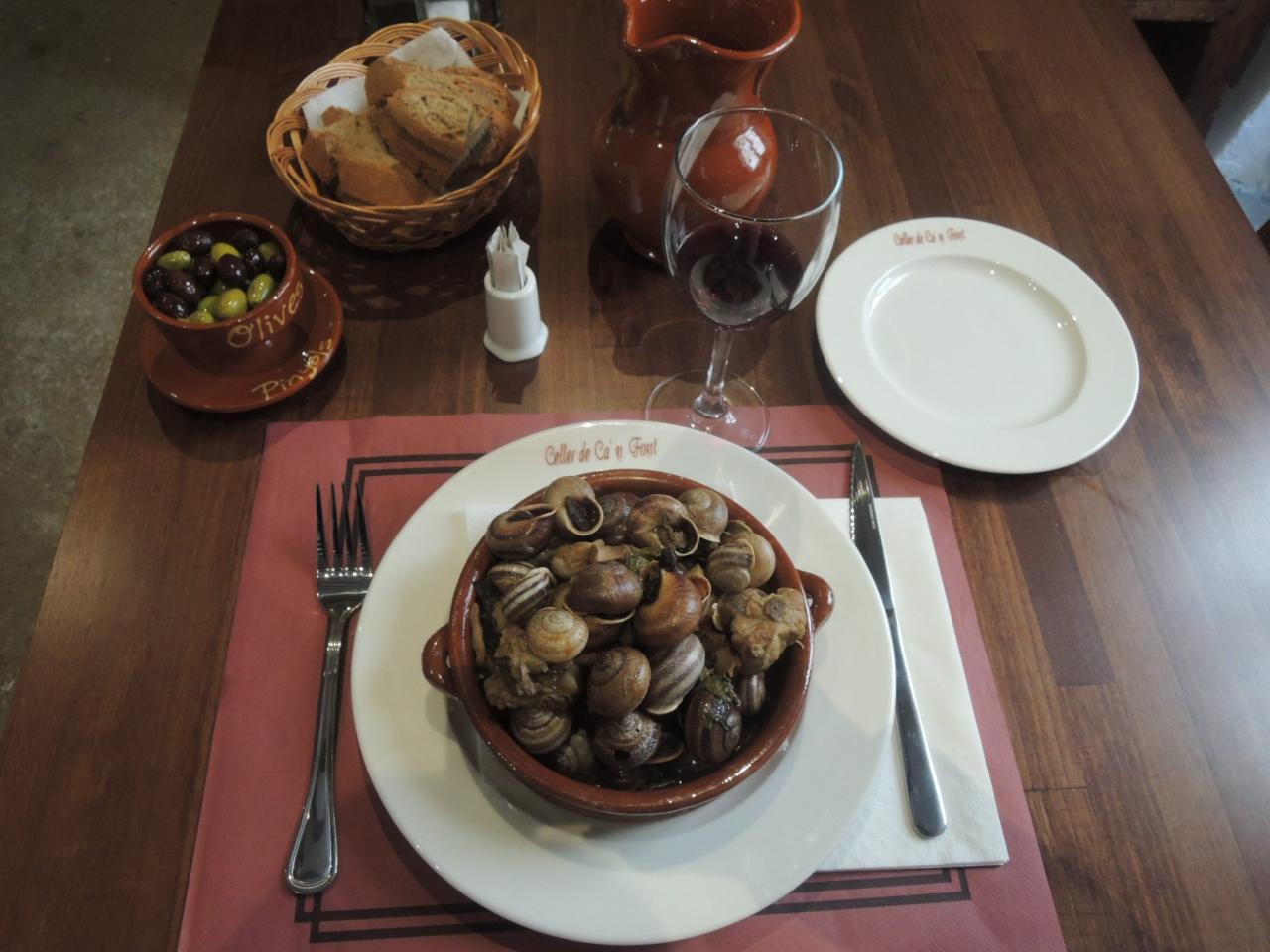 But whether you like snails or not, you have to admire the great lengths locals go to in bringing them to the feasting table. First there’s the ‘gathering’. You CAN actually buy them, but Majorcans like nothing better than foraging for their traditional delicacies.
So, after a good downpour, you will find the knowing hunters out with their little bags.

The ‘snail spotters’, hunched low as they comb the lanes for their ‘caracoles’. It makes you wonder where they all come from! Not the Mallorcans, but the snails! After the rain there are hundreds of them, gliding down the damp lanes, unknowingly heading towards that big pot. But this is seriously slow food, and doesn’t just end with the catch. Next comes the preparation.

You don’t really know where snails have been or what they’ve been eating, so you need to control their diet for a few days. Most locals put them in a closed wicker basket or something equally breathable, and feed them lettuce for a few days. Then they feed them with flour for a further two days to ‘purge’ them of all impurities. The final rinsing can go on forever, but is necessary to rid those little blighters of any dirt or grit.

Now, they are finally ready to cook. And of course the recipes are as various as a catalogue of rose blooms. Eating snails is again all a question of personal taste and choice – like Angryknickers and her decision to rage against reasonable regulations. Happy planting! And watch out, there’s a snail about!

Can’t work it out. One is not allowed to wander around an empty garden centre without wearing a mask, but can sit in a busy restaurant surrounded by dozens of other maskless people eating caracoles.