When Casa Gallega in the Avenidas reopened on May 28 last year after the first anti-covid confinement period, it went out of its way to welcome back the regulars, offering them an amazing €15.50 menú del día.

The mains included cod, fillets of John Dory and a ‘filet mignon’, the tail end of the full piece of fillet steak. I had never seen fillet steak on any menú del día, even the most expensive ones at €23. The heading on that review was ‘The best ever menú del día’.

The restaurants’ interior dining rooms are once again open (after a five months second closure) and Casa Gallega has once again come up with an incredible range of dishes on their €15.50 menú — the options are even better than last year.

Starters can include tartar of marinated salmon, Iberian cured ham canelones, a cous-cous salad with gambas and cockles, mussels in white wine and a meat lasagna.
For the mains they offer fillets of John Dory, dorada and corvina (similar to sea bass) plus bacalao al pilpil (the famous Basque dish) and a variety of fish with a seafood sauce. You can also have confit leg of duck, a casserole of Iberian pig cheeks — and that fillet mignon with a pepper sauce.

This time I wanted to start with mussels in white wine, garlic and paprika, but they were off that day so I had a salad with Andalusian-style fried fish.
The seafood part was workmanlike and included a langostino, a piece of hake, cod, a fresh anchovy and pieces of squid. There was also a croquette and three pimientos de Padrón.
The greens played an essential role in this most successful salad. They were extremely fresh and varied and included some of the more expensive ones such as rocket and lamb’s lettuce. 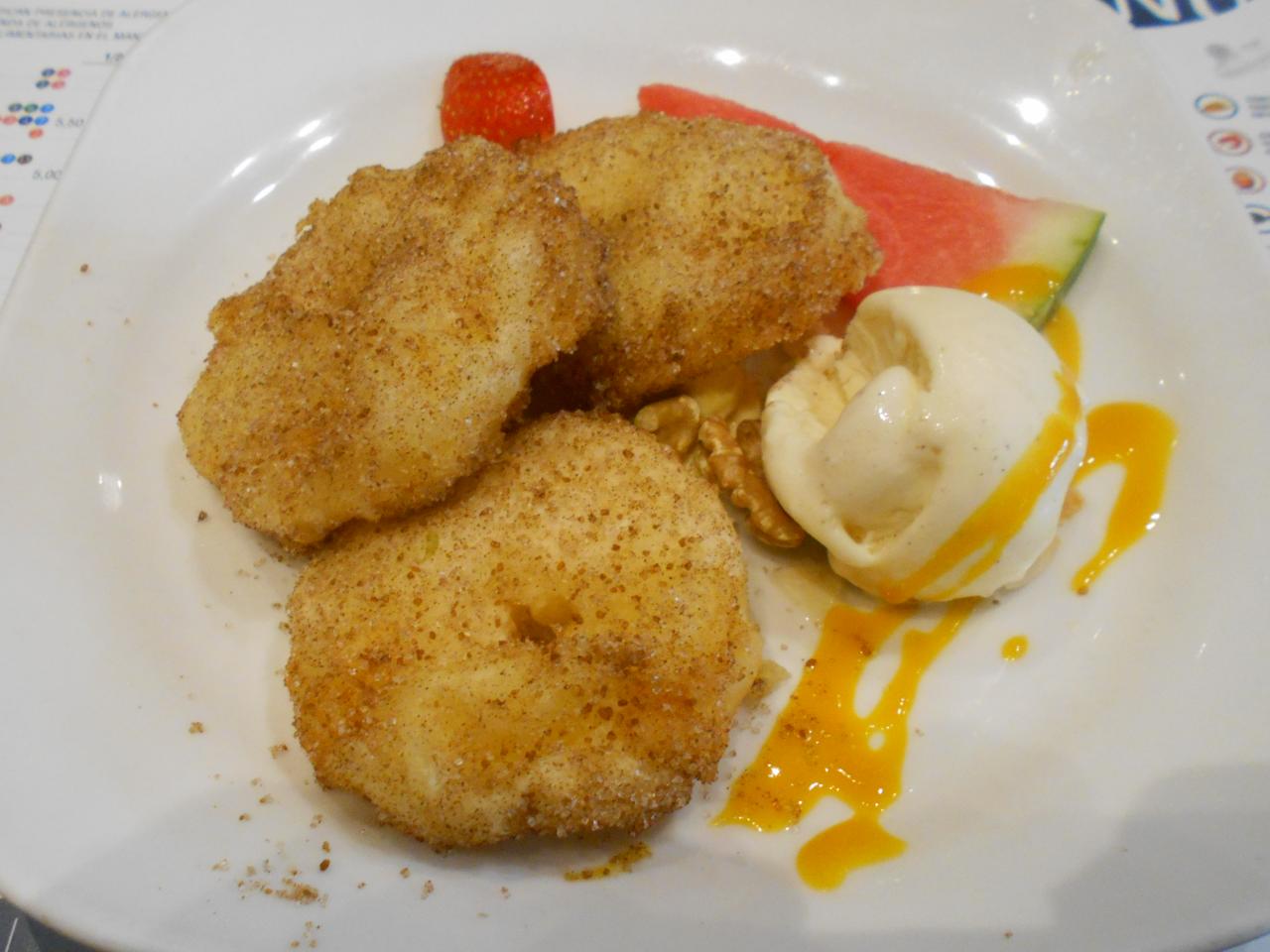 But what made this salad so splendid was the dressing — it was arguably the best I’ve come across in decades of eating in restaurants.
They used an abundance of dressing and every piece of salad green was beautifully bathed in it — that doesn’t mean swimming in it, but the leaves were nicely drenched.

In the end, what made this salad so special in my experience was the dressing’s acidity. They had used a non-aggressive vinegar, or perhaps an ordinary wine vinegar that was tempered to a lovely velvety consistency that didn’t attack the fragile greens. Whatever it was, these salad greens and this unique dressing added up to a perfect 10.

When a good piece of steak, entrecôte or fillet, is in the offing I don’t went the cook to mess around with it and serve it up with a sauce of some kind. The fillet mignon is on the menu as being chargrilled and presented with a pepper sauce — which usually means the meat is smothered in a rather uninteresting concoction of some kind. 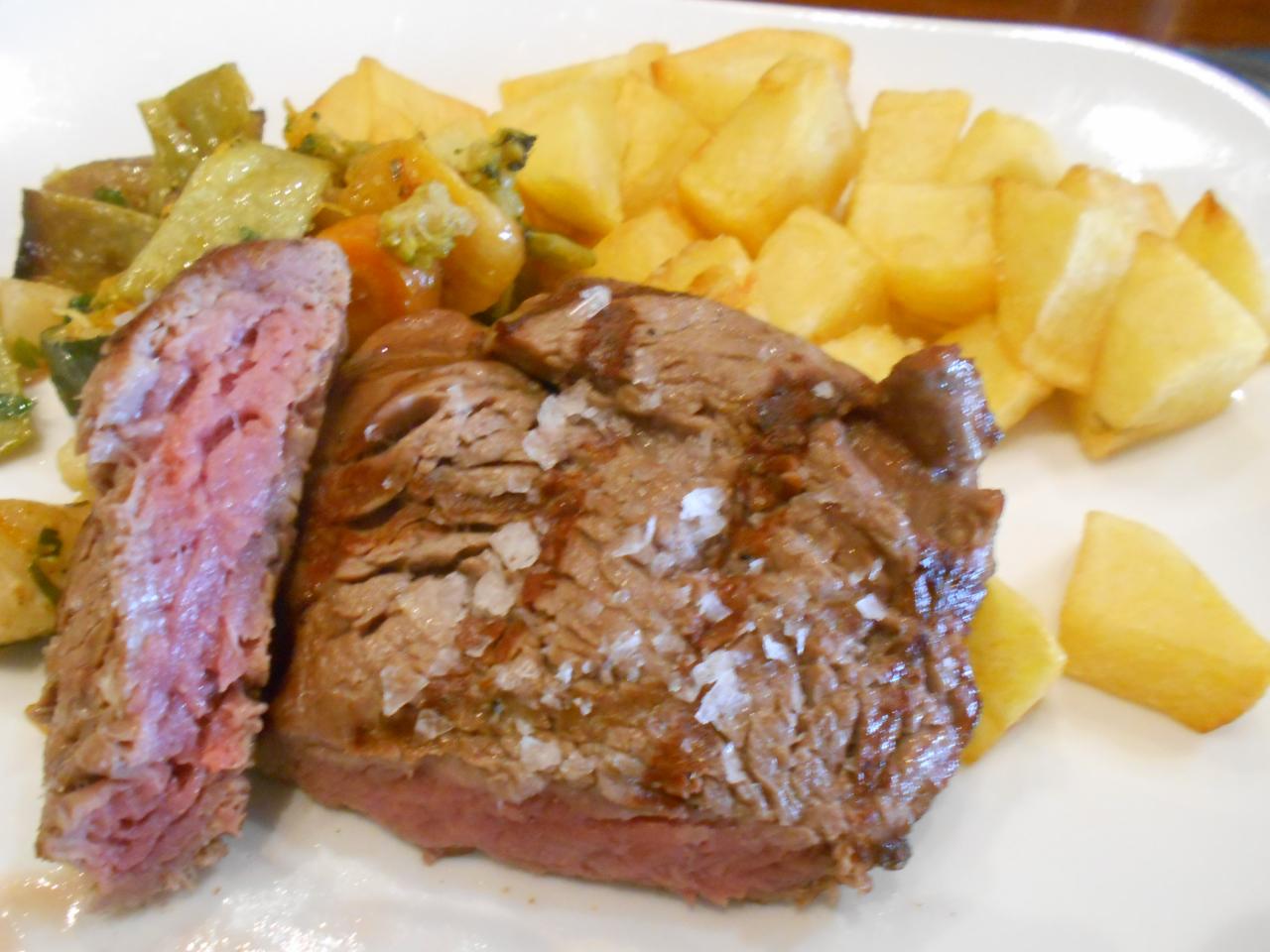 I didn’t want even an interesting sauce and asked the waiter to bring it plain chargrilled, very underdone and with some patatas fritas which, in Spanish, means chips.
It was an excellent generous chunk of fillet mignon, well and truly rare, bags of flavour in every chew, and instead of chips it came with potato wedges straight from the deep-fryer. It was worth a 10.

These desserts don’t fall at the last fence

In so many Palma restaurants the cooks take considerable care with the starters and mains and produce some really nice value-for-money dishes. But the desserts can be a huge disappointment — like the Grand National outsider that leads most of the way and then falls at the last fence. That didn’t happen with Casa Gallega’s desserts.
I was having the €15.50 menú del día that includes dessert, but I had to order another one à la carte to make up the five pictures I need for the double-page review.

The menú del día choice was between slices of fresh pineapple and caramelised flan. Fresh pineapple that is ripe and juicy cleans and refreshes the palate but it gives us no indication of the kitchen’s culinary prowess with desserts. So I went for the caramelised flan.
Flans usually come in individual cone-shaped tins, but as this was a dessert on a low-cost menú del día with some high-cost mains, the kitchen had saved time and money by making the flan in a large recipient and cutting out individual sections.

This was a pleasant competent dessert, the flan served with strawberry ice cream and a triangle of fresh watermelon, both of which were most refreshing.
By this time I was nicely full and any wise weightwatcher would have asked for the bill and headed for home. But I needed that fifth picture and that meant ordering another dessert.
I was hoping they’d have an apple tart or something like that which I could photograph and then take home in a plastic box to have with an afternoon cup of tea.

There were no tarts or other desserts that were also suitable takeaways, so I looked for something light and thought one of fried slices of apple served with ice cream and slivered almonds would be just right.

Well, look what I got: thick batter-fried slices of apple, vanilla ice cream, a triangle of fresh watermelon with slivered almonds and half a walnut to provide a nice contrast of textures. I ate up everything with the greatest of relish…and I also got that fifth picture I needed.

I don’t know a great deal about the economics of running a restaurant, but I am sure Casa Gallega can’t have much of a profit margin on a €15.50 menú del día with dishes of this elevated standard and initial high cost of the raw materials. You simply never see a filet mignon on a €15.50 menu, so it is obviously management’s generous way of saying thank you to the regulars for past and future support.

It’s a most touching gesture and I hope all of us are capable of appreciating it. But it wasn’t just the filet mignon, there were also the up-market fillets of fish, that amazing 10-rated salad with the unique dressing and my à la carte dessert of thick rounds of deep-fried apple was a memorable way to finish off a meal.

Restaurante Casa Gallega, Avda Compte de Sallent 19, Palma. Tel:871-948115. Open every day for lunch and dinner. This restaurant has a veritable army of regular customers so you should always book a table — or get there at the 13.00opening time. They do a dinner menu at €18.50 and also what they call a menú festivo at €19.50.

The menú del día costs €15.50 for starter, mains and dessert, plus a drink that can be a caña, glass of house wine or a soft drink. Bread, if you have it, is extra. That adds up to four pictures but I need five for the two-page review, so I had an à la carte dessert that added another €5.20 to the bill. The total cost was €20.70 with VAT.