During a Mallorcan summer, most of us don’t feel like cooking and at some stage our interest in eating is considerably diminished. One way of keeping out of the kitchen as much as possible is to plan mainly those dishes, such a stir-fries and grills, which can be cooked in a few minutes and with a minimum of bother.

A way of appealing to tired tastebuds is to go for spicy-herby dishes that have a slightly exotic ring, those we seldom cooking during the rest of the year. And they must be based on simple recipes that can be done quickly.

One way of combining these two solutions, so that the cook isn’t beside the cooker for too long but will be able to produce dishes that get the gastric juices flowing, is to serve fish and meat grilled on skewers.

Although this is an easy and interesting way of cooking fish and meat, most people I know make little use of it. That makes brochettes different from the usual everyday fare — and as they are marinated with herbs and spices they have layers of flavour that will tickle even the most exhausted of palates.

For the busy housewife who doesn’t have time to make up her own brochettes, most supermarkets and butcher shops sell them herbed, spiced and ready for the grill.

The best I have come across are at Carns Comas, the big butcher stall on the left as you go through the main door at the Mercat d’Olivar. It’s the only place I know of that does lamb brochettes.

But I find that assembling brochettes is quick and easy and I always prefer to do my own. DIY brochettes are also much more economical.

Brochettes are known as kebabs in many countries but I prefer to call them brochettes because kebab has become very much associated with the donar kebab, yet another way of grilling meat — but one we don’t do at home.

The most common Middle Eastern name for brochette is shish kebab — shish being a skewer and kebab meaning grill. In Turkey, kiliç sis (kylych sheesh) is skewered swordfish. Shashlik is another popular name for a brochette.

Although we can invent our own herbs and spices mixtures for brochette marinades, it helps to know how other nations have been doing them for hundreds of years.
Once we have the basic knowledge of anything, we can then improvise, making any changes that take our fancy. 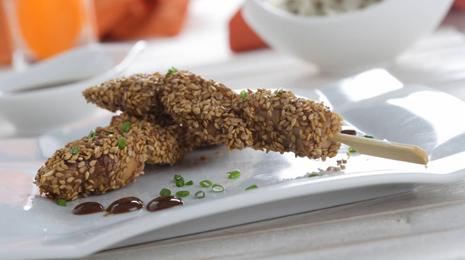 That’s what Picasso did — and look what he achieved. When adding herbs or spices to a dish, personal taste always comes into the equation so all seasoning must be based on what you prefer: the condiments in all recipes are merely guidelines.

The best known of the variations on the brochette theme are those from the Middle East. They are traditionally made with lamb or mutton but the basic method works well with beef, veal, poultry and other kinds of boneless meat.

Firm white fish such as monkfish can be done in the Middle Eastern way — and tuna or swordfish brochettes are specialities.

For basic Middle Eastern brochettes use boneless lamb from the leg or shoulder. Allow about 200 grs per person, depending on individual appetites and also taking into account the other dishes being served.

The meat is cut into bite size pieces and is marinated for anything between two hours and two days. All cooks have their own special marinades but a common combination is one part lemon juice to four of olive oil, crushed garlic, salt and pepper to taste, and herbs and spices such as thyme, oregano, bayleaf, cumin or some of the other warm spices.

But choose no more than two herbs or spices, selecting those that complement each other. It’s a mistake to sprinkle on a little of every herb and spice you have at hand. 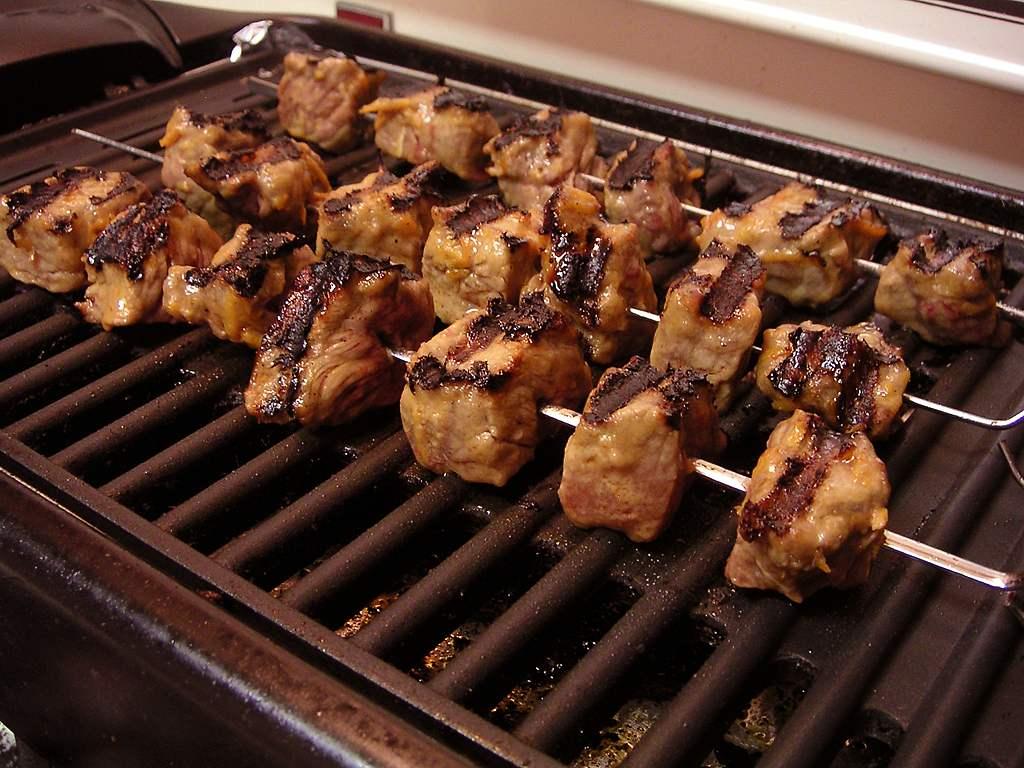 The skewers are filled with nothing but pieces of meat. The alternating of meat with onion, tomato, red or green pepper and other veggies is a European variation that is alien to most countries where brochettes are a speciality.

Use smallish metal or wooden skewers. Two of them, when well filled, will be enough for one person. If you want lamb brochettes to be rare and juicy, push the pieces close together.
But if you prefer the meat to be crisp all over and, therefore, well done, then leave a little space between the pieces of meat so the heat can circulate and do its work.

The grilling, frying or chargrilling is done over a high heat and the timing depends on whether you want the brochettes well done or on the rare side.

In Middle Eastern countries brochettes are usually served on plain boiled rice, pilaf or cous-cous. During the hot weather you may prefer to use a bed of salad greens dressed with a tangy vinaigrette.

Marinades vary in countries that specialise in brochettes and mainly depend on the availability of herbs and spices. In Armenia, where spices are used more sparingly than in other Middle Eastern countries, a popular marinade is made with 150mls olive oil, one tsp ground all spice, 150 mls red wine and salt and pepper to taste.

The Greeks are more fond of herbs than spices, a preference that is seen in their marinades. A popular one contains150 mls olive oil, juice of one lemon, 2 onions very finely chopped or blitzed to a paste in a blender, 2 bayleaves, 2 tsps oregano, the pulp of two peeled tomatoes, and salt and pepper to taste. 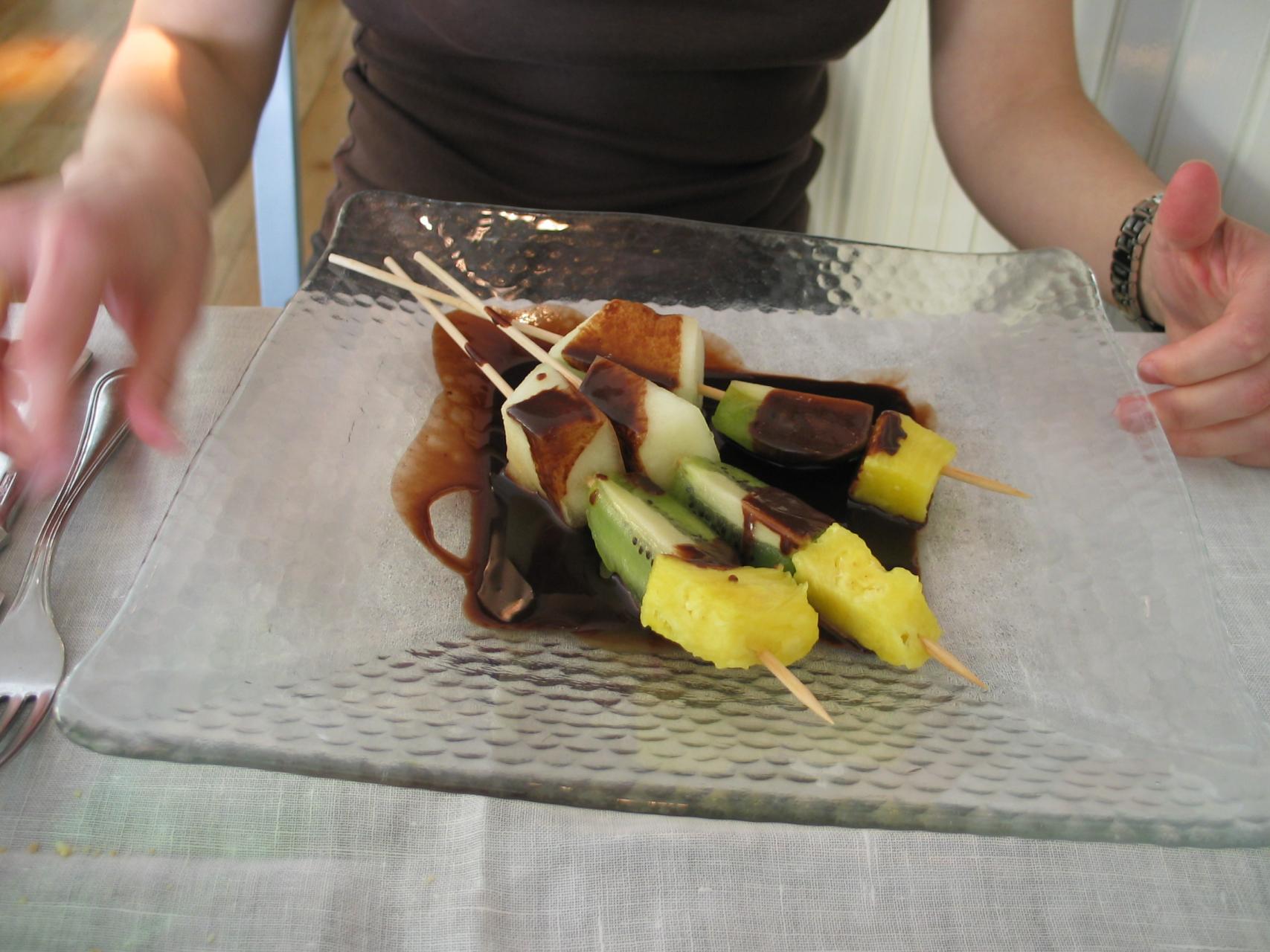 The Turks also use surprisingly few spices and herbs. A typical marinade is made with 150 mls olive oil, 2 finely chopped onions or blitzed to a paste, one tsp ground cinnamon, salt and pepper to taste.

The Lebanese also keep their marinades nice and simple, a common one containing nothing but olive oil, fresh thyme, salt and pepper.

A Caucasian marinade could contain 100 mls olive oil, 100 mls red wine, 2 tbsps red wine vinegar, one crushed garlic clove, bayleaves, salt and pepper to taste.
The Caucasians also like to use the juice of a ripe pomegranate and their brochette lamb is sometimes marinated in nothing but lemon juice.

In Caucasia, which takes in Georgia, Armenia,
Azerbaijan and south-east Russia, cooks sometimes alternate the meat on their skewers with chunks of vegetables such as onions, green peppers, mushroom and aubergines.
Thick pieces of frozen monkfish, (rape, in Spanish) are particularly good as brochettes when marinated in olive oil, a little lemon juice and powdered bayleaf to taste.

They also gain in flavour when the nuggets of fish are alternated with thin pieces of onion and bayleaf.

The best chicken for brochettes (and also the most economical) are the boneless thighs at Mercadona. Never do brochettes with breast of chicken: no matter how much marinade you use the meat will always be disappointingly dry.