Anyone who cooks at home during a Mallorcan summer (which takes in most mothers) knows that this is the worst time of the year for being in the kitchen.

If you can’t stand the heat, stay out of the kitchen, advised President Truman. He was referring to heat generated by political issues, but many of the Mallorcan amateur cooks I know take his advice literally — and they do keep away from the kitchen from June to August.

One obvious way to avoid cooking in the heat is to live on salads, with protein coming from eggs, canned fish such as sardines and tuna, cooked ham and other charcuterie products, pa amb oli and its huge variety of toppings, pre-cooked gambas and langostinos, meat pies such as Mallorca’s empanadas, and any of the wonderful cheeses on offer — a ploughman’s lunch has always been considered a simple way of having a nutritious mid-day meal.

I know several Mallorcan housewives who don’t stay out of the kitchen during the hot weather, but do their cooking, roasting and baking at nightfall — any time between 10pm and 1am when the temperature has dropped considerably.

One of these friends is an accomplished baker and during her night-time stint in the kitchen she is able to produce all kinds of pies and savoury tarts that can be eaten cold.
The family’s favourite is quiche because she makes it only during the summer and it has become a kind of seasonal speciality that everyone greets with relish, like turrón at Christmas.

There was a time when quiche meant quiche Lorraine, one of the great delights of French provincial cooking, a delicious savoury flan with an egg and cream filling seductively flavoured with streaky bacon. 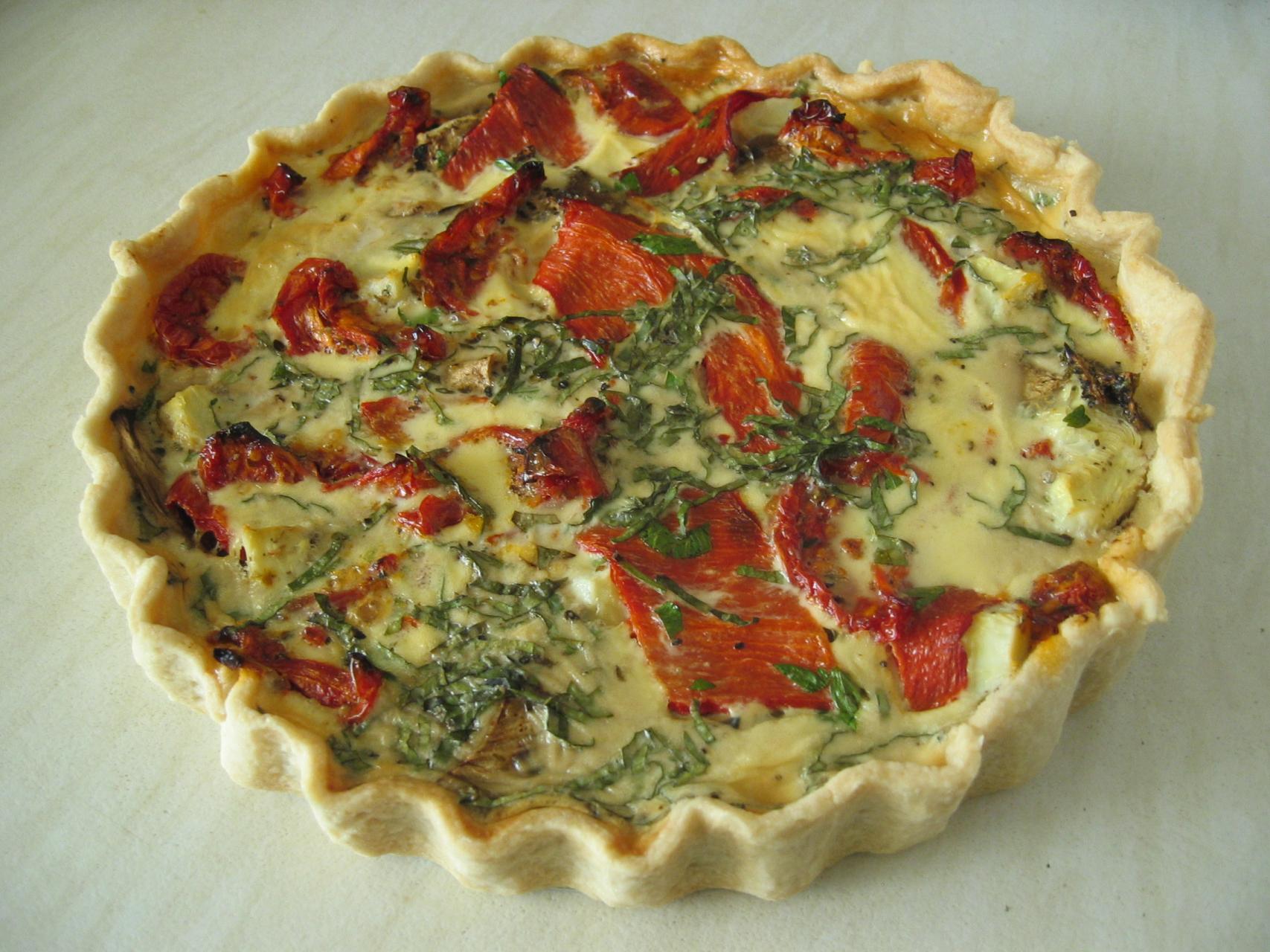 Quiche Lorraine was voted Britain’s most popular dish of the 1970s, but in the 1980s it lost some of its universal appeal when the market was flooded with other savoury goodies from every corner of the globe.

It was very much back on household tables 10 years ago simply because it is a classic and retro food was making a big comeback up and down the country.

The quiche Lorraine is a speciality from Alsace, the name coming from a dialect word via the German kuchen (cake). The original recipe has been adopted and adapted in every French province and you find quiche-like tarts under a variety of names that include tourte, galette, fiouse and flon.

Like the Neapolitan pizza, quiche originally evolved as a means of using up leftover bread dough. But enterprising bakers experimented and refined the recipe. Bread dough was eventually dropped in favour of pastry based on butter and eggs.

The classic filling for the authentic quiche Lorraine is streaky bacon, eggs and cream. You will come across restaurants all over the world (including France) that serve quiche Lorraine with the addition of gruyère cheese.

That is not an authentic version. Quiche has a pedigree that goes back to the 16th century and its ingredients have never included gruyère cheese or cheese of any other kind.
There are now dozens of fillings designed to suit all tastes. If you like seafood (and I know lots of people who don’t) you can include crab, prawns, shrimps, clams, mussels — and also lobster or oysters if your budget runs to them.

Vegetarians (and I also know lots of them) can opt for artichokes, asparagus, broccoli, mushrooms (there are many to choose from), cauliflower, spinach, courgettes or aubergines. They can also try watercress, rocket or lamb’s lettuce, first sautéed in plenty of butter.

Sorrel makes an exquisite filling if you grow it or can get it. Another favourite with some vegetarians is baby spinach and mozzarella with roughly copped walnuts.
You can make a superb quiche by adding cheese only to the egg and cream mixture. Choose from blue cheese of any kind, brie or camembert, parmesan, and just about any hard cheese that takes your fancy.

But when making an all-cheese quiche, always take into account the amount of salt in the cheese. Most blue cheeses are extremely salty, as are pecorino romano and feta, as well as a few others. 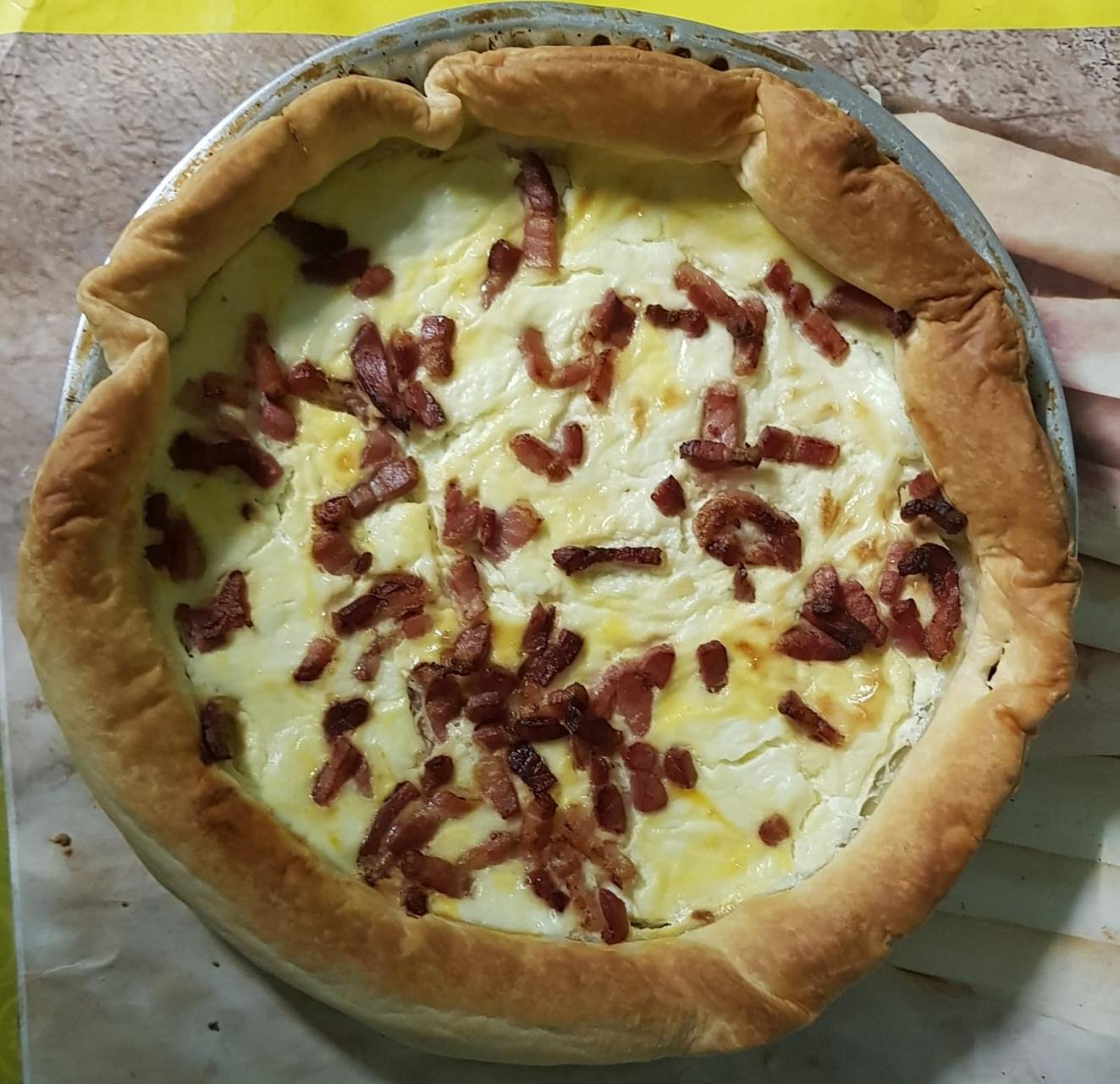 I have never been an accomplished pie maker, but there are two savoury pastries I make most successfully: quiche and pizza. And I am indebted to Elizabeth David’s Italian Food for the pizza and Provincial French Cooking for the quiche Lorraine.

All of her cookbooks are superb but French Provincial Cooking is her masterpiece. The paperback version is the cookbook I have most used and it has literally fallen into loose pages.

A few months ago I pensioned it off into a corner of the bookshelf and I now use the hardback edition. It’s the kind of cookbook that’s a good read as well as being highly instructive when you want to know how to cook a traditional French dish.

Cut the butter into small pieces and rub them lightly into the sieved flour. Beat the egg gently and mix it into the flour, using your hands. Add enough cold water (2 to 4 tbsps) to make a soft dough that is firm enough to come away from the sides of the bowl.

When you have that consistency, shape the dough into a ball, wrap it in a cloth and leave it for a couple of hours. Roll it out thin, line the base and sides of a 20-22 cms flan tin and prick the surface with a fork.

Mrs David doesn’t bake the pastry shell blind, but I always do because it gives a crisper finish. Before baking it blind I strew the base with chickpeas which I keep for that purpose. Five minutes in a hot oven are enough to dry off the pastry shell.

For the filling, cut eight rashers of streaky bacon into lardons, and sauté them in a frying pan until the fat starts to run. Arrange them round the pastry shell.

Have ready 200 mls of cream into which you have beaten three eggs yolks plus one whole egg. Season to taste with salt and pepper, taking into account the saltiness of the bacon.

Slowly pour this mixture over the pastry base and transfer it immediately to a preheated oven at about 170C. Bake for 20 minutes, then lower the heat and bake for another10 minutes.

The filling should be of a nice golden colour with light brown patches and should puff up. If you let it rest for a couple of minutes it will be easier to cut, but don’t wait any longer than that or the filling will fall flat.

After decades of ordering quiche in restaurants (even French ones) and being highly disappointed, I stopped doing it. The trouble with a restaurant quiche in Mallorca is that you never know when it was made.

If you ask if it was baked that morning, the waiter will say yes, even if it’s two days old. And all too frequently it is two days old.

The only place I know of where I can always get a freshly made quiche is La Bodeguita del Centro in Calle Carmen 14, (Tel:971-4952599) where Maribel Moll does an excellent menú del día at €15.90 that changes twice a week, Monday to Wednesday and Thursday to Saturday — but check to make sure she is still opening on Saturdays. 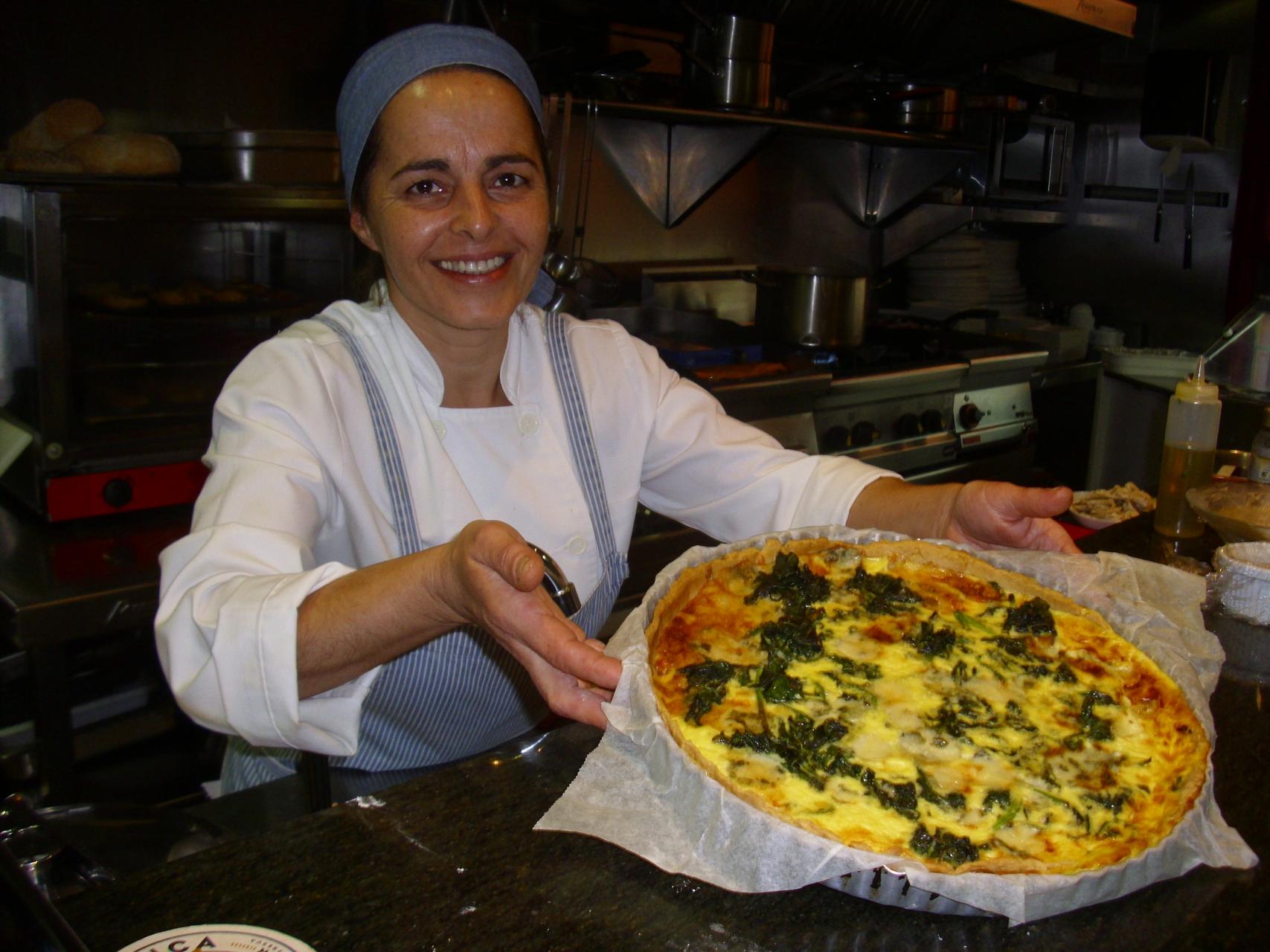 Although Maribel makes a large quiche, the regulars scoff it off and she has to make a new one every day. Quiche isn’t always on the menu, but Maribel makes one when customers phone to request it. That’s what I call good service.