Not all that long ago, few people in Mallorca were familiar with the little French dish called tapénade. But about 18 years ago it started to become fashionable and was appearing on restaurant menus all over the island.

What we were being offered, however, wasn’t tapénade — and even today I have never seen a genuine tapénade at an island restaurant. What most restaurants blithely call a tapénade is simply finely chopped black olives — just one of the three ingredients that go into a genuine version.

Tapénade, a famous dish from Provence that is sometimes classified as a sauce, is more of a spread, or even a kind of pâté served on its own or as part of a French-style mixed hors d’oeuvres.

The dish gets its name from one of the three essential ingredients: capers.The Provençal word for caper is tapéno, similar to the Mallorcan word, tápera.

Elizabeth David, the most influential English food writer of the 20th century, introduced Britons to the tapénade in her first cookbook, A Book of Mediterranean Cooking. Those who bought her book in 1950 were unable to make many of the dishes because the ingredients weren’t available, even in London.

But turning out a little dish of tapénade was within many people’s possibilities even in those austere days when Britons still used ration books to buy goods they were soon to take for granted.

For keen amateur cooks, especially followers of Elizabeth David, tapénade became a popular starter because it was so easy to make. As with so many other Elizabeth David recipes, tapénade’s great attraction was its simplicity: even novice cooks could impress their friends with a most acceptable version.

When Britons made first-timer holiday forays into France in the early 1950s, they frequently came across tapénade as one of the dishes on fixed-price menus — although they never saw it in British restaurants.

But trendy British cooks discovered tapénade in the late 1990s and stared to serve it in a variety of ways, not just as a spread for toast or biscuits: they were fond of using it to add a bit of zing to grilled or steamed fish. 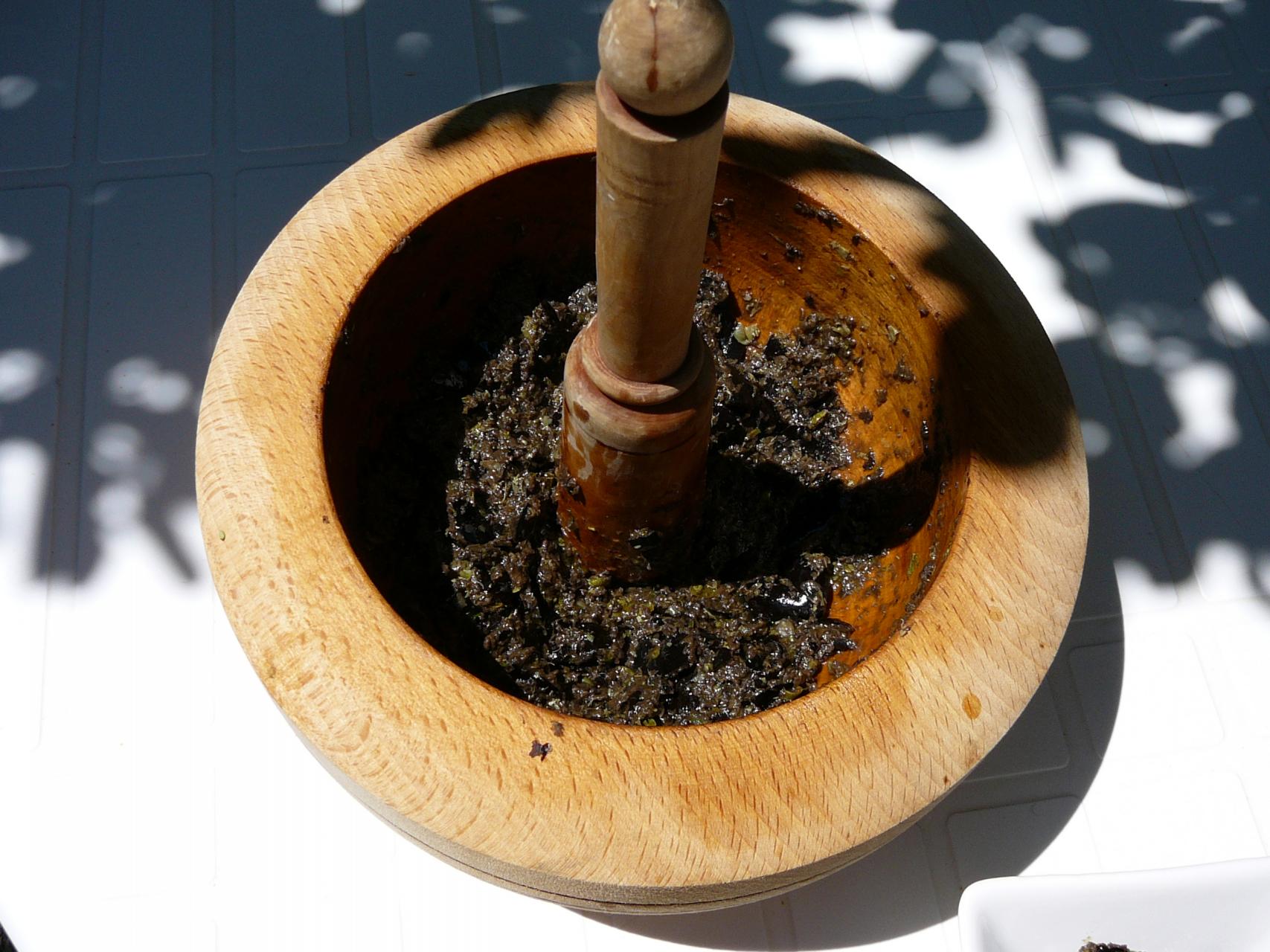 That brought the dish to the attention of food manufacturers and it wasn’t long before the public could buy little jars of black stuff masquerading as tapénade.

But even the best brands of today’s commercial tapénades are never as good as the authentic version you can do at home. It is so easy peasy to make a tapénade that will keep in the fridge for several days that you shouldn’t even consider buying a jar from the supermarket.

During a hot Mallorcan summer, tapénade is a delight for jaded tastebuds and can be used as a mid-morning snack, a nibble before lunch or dinner, as a starter, or as part of a more elaborate French-style hors d’oeuvres.

The best black olives for this dish (and the ones you must use) are the wrinkled Mallorcan kind called panssides or those from Aragón, aceitunas aragonesas.

The Mallorcan panssides olives and those from Aragón are available at the big olives counter in El Corte Inglés in the Avenidas. At the Jaime III store, there’s a smaller section of olives forming part of the prepared food counter. You’ll also find there some of the other bits and bobs needed for doing pa amb oli, a popular light lunch or dinner dish during the hot summer months.

Put the olives, anchovies and capers into a mortar and pound until you achieve a thick-textured purée. Add the virgen extra olive oil very slowly, blending it in with the pestle. Stir in two or three drops of lemon juice.

In the tapénade recipe in her 1950 book on Mediterranean cooking, Elizabeth David doesn’t include black olives in her ingredients, which is very strange. She also uses the juice of a whole lemon, but I don’t recommend more than two or three drops because the acidity in the juice ‘bleaches’ the olives and you want the tapénade to be as black as possible.

But in her 1960 French Provincial Cooking (one of the best books on French food), Elizabeth David was using black olives and was also including canned tuna fish, which is definitely not in the original Provençal recipe. 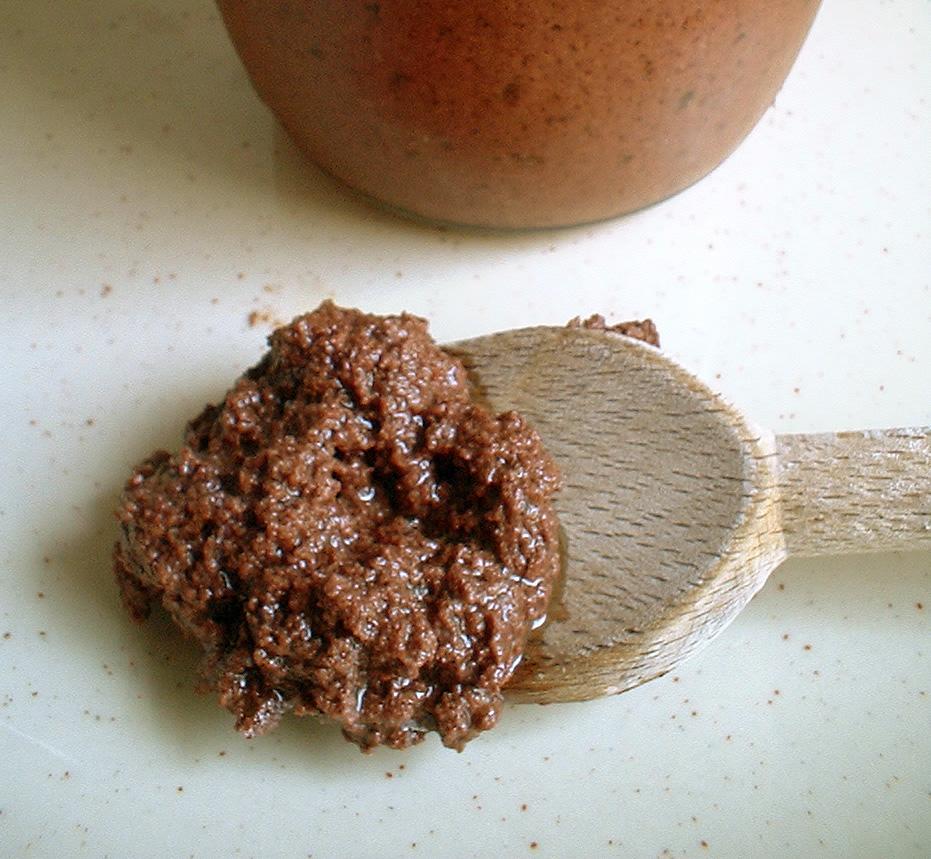 Most cooks and food writers these days (even the marvellous Claudia Roden) include canned tuna but, once again, I don’t recommend it because it changes the colour, texture and taste of this incredible simple recipe.

In Provincial French Cooking Elizabeth David also recommends the addition of a little mustard and even a “few drops of cognac” or other distilled spirit, but I don’t even want to consider that. The original tapénade recipe is sheer perfection. I don’t want to mess about with it.

Don’t be tempted to cut corners by blitzing everything in a blender or you will end up with a baby food slush and your tapénade will lack the coarse texture that is the hallmark of the authentic dish.

You can spoon the tapénade into small ramekins and use it as a pâté, or you can serve it as a simple and attractive starter by transferring it to a flat dish and studding the surface with hard-boiled eggs, halved lengthways and presented cut side down.

Hard-boiled eggs can be used as another easily made starter when you don’t feel like spending a lot of time in the kitchen. Take the yolks out of the eggs halved lengthways and mix them into the tapénade, but not too thoroughly so that bits of yellow are still visible.
Stuff each egg half with this mixture and serve on a bed of shredded salad greens. Rocket, lamb’s lettuce or baby spinach leaves make a welcome change from the more usual green lettuces.

For an informal luncheon, tapénade is especially good when served as a pâté to be spread on baby gem lettuce leaves. These leaves are ideal for eating this way because they are short and sturdy and are a good support for all kinds of spreads.
Baby gem lettuces, available at most supermarkets these days, are called cogollos. Mercadona and El Corte Inglés sell them in packs of three for €1, which is an extremely good price.

Cogollos are a Navarra speciality and the best ones come from Tudela, although they are now grown all over Spain. Those sold here are never from Tudela.

The Navarrans have an unusual way of serving cogollos. Each little lettuce is cut lengthways into four wedges that are arranged on plates or a serving dish.

Olive oil is heated in a small frying pan until very hot, but not smoking. The pan is taken off the heat and slivers of garlic are immediately added and stirred around with a wooden fork. As soon as the garlic slices turn golden and crisp, which is very quickly, the contents of the pan are spooned over the wedges of lettuce and served immediately.

The garlic must not brown or even become brown, which is why the slivers are added to the hot oil off the heat. The hot oil on the cool cogollo wedges and the crisp garlic slivers add up to delicious texture and taste sensations.

Cogollos are sometimes served whole in Navarra and each diner cuts them into wedges and dresses them to taste. Navarrans use a simple dressing of virgen extra olive oil, vinegar and salt — and they go easy on the vinegar.

Done like this as a starter, it is known as ‘perdiz de huerta’ (garden partridge) because a cogollo is about the size of a plucked partridge.