I have a little secret: I like pulling men. I even downloaded a new app to help me meet more guys. Earlier this week, I connected with Mariusz. He’s a forty-seven-year-old Polish bloke staying in Arenal with his family.

At first, I wasn’t sure about pulling a random stranger. I was concerned about his size, so I sent him a message on the app. “How much do you weigh?” I asked. If he’s too big, it’s just a waste of time. If he’s only a little bigger, I’ll be sore the next day, but at least I’ll have had a good time. “I’m 78kg”, replied Mariusz. We’re compatible size-wise, but it says that he has 18 years of experience on his profile. He’ll dominate me, but at least he can teach me some technique. We’ve arranged to meet up this weekend.

A couple of years ago, the YouTube algorithm introduced me to the world of professional arm-wrestling. I watched former World Armwrestling League (WAL) champion Canadian Devon “No Limits” Larratt, showcase his skills against the worlds strongest man, the Icelandic Hafthor Björnsson.

Now, Devon isn’t a small guy. He’s 196cm and weighs upwards of 120kg. But Hafthor weighs 206cm and weighed 156kg at their exhibition bout (he also holds the world record in the deadlift at 501kg). Despite Hafthor’s size and overall strength advantage, Devon looked like he was toying with a child. As with other combat sports, it isn’t always the biggest guy with the biggest muscles that wins in arm-wrestling. It’s also about stamina, endurance, resistance and, most of all, technique.

The sport has gripped me ever since. Embarrassingly, I spend hours watching burly men from the US’s Midwest lock hands and make grunting noises, veins popping out of their biceps and foreheads. I watch poorly filmed training videos of Russians and Georgians doing bicep curls with rusting weights in concrete home gyms. I watch old, grainy 80s footage of the sport’s pioneers like the American giant Cleve “Arm Breaker” Dean, who was over two metres tall and weighed north of 200kg. And I take great pleasure watching Brazilian Gabriela Vasconcelos- the current women’s world champion- make a mockery of men twice her size. I’m a little ashamed to admit it, but I love arm-wrestling. 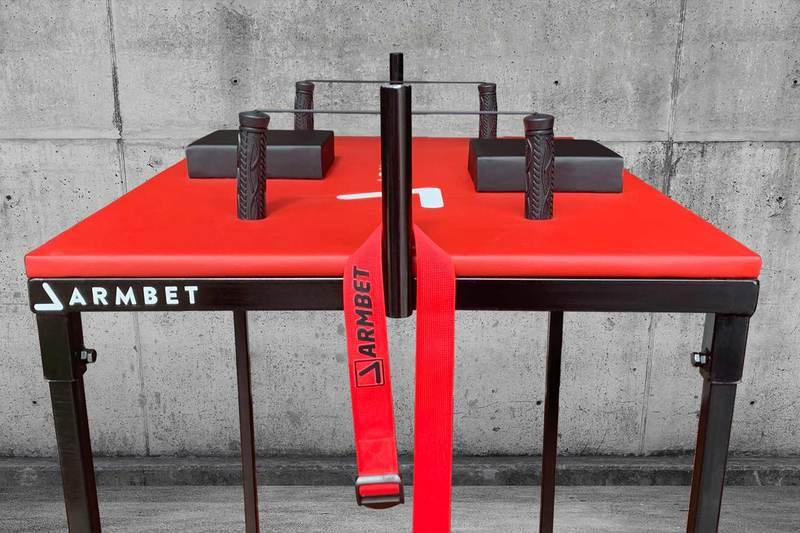 Why am I so fascinated with this sport?

For the same reason I love other combat sports, tennis and, ironically, for the same reasons I also spend too much time watching chess videos. They all present a head to head dominance battle. Whether it’s a battle of wits, agility or strength, I’m biologically hardwired to be interested in the outcome of each contest.

Evolutionary speaking, dominance means access to resources like food and mates. My fascination with dominance is Darwinian, as biological as breathing. British philosopher, Alain de Botton, underlines this in his book ‘Status Anxiety. ‘Our interest in status’, de Botton tells us, ‘is linked to something that is as essential to us as light, heat, food and water.’ Bulls lock horns. Deers lock antlers. Humans lock palms. It’s just another way nature establishes order. In the hierarchy of arm-wrestling, the current king of the table is Levan “The Georgian Hulk” Saginashvili. Historians traced arm-wrestling back to 2000BC. Ancient Egyptian hieroglyphs, preserved in caves, depict men palm to palm in hand combat. 18th-century writings and paintings show that the sport has been popular in Japan for hundreds of years. Even the modern sport of arm-wrestling is based on an old Native American Game, and in the 19th and early 20th centuries, the game was still referred to as ‘Indian Wrestling’.

Arm-wrestling is hand combat, but you don’t only wrestle with your arms and hands. The best arm-wrestlers know how to engage their whole body. Modern arm wrestling tables encourage you to lean over and leverage your bodyweight—a peg for the ‘lazy hand’ assists with engaging all of the muscles connecting both arms. But, no matter how strong your body is, you can’t access the power in your big muscles- like lats, pecs and biceps- without proper wrist and forearm strength, as Hafthor Bjornsson soon realized. The wrist is so crucial to winning that the sport was long referred to as ‘wristwrestling’. The ‘top roll’ technique, for example, requires you to pronate your wrist, folding your opponent’s hand back. You then finish them off by pretending to pour a cup of water into your shirt pocket.

The top roll technique was popularised by John “The Perfect Storm” Brzenk. He’s won some sixty plus titles and is often referred to as the GOAT (greatest of all time for those who aren’t familiar with sports jargon). You’ve seen him; he makes a cameo in the 80s movie ‘Over The Top’ starring Sylvester Stallone. As wrist and hand strength takes so long to atrophy, Brzenk still competes in the sport’s top tier at 57 years of age.

Is arm-wrestling dangerous? It does put substantial torque and torsion on the upper arm bones. Snapping the humerus isn’t funny. If done incorrectly, it can also cause tennis elbow and pectoral tears. To avoid these injuries, always warm up the joints and tendons before applying anything close to full force, and be sure to keep your shoulders facing your hand whilst wrestling. Lean sideways. Don’t twist.

I’ll be employing these techniques when I meet up with Mariusz this weekend. I’m looking forward to our date. There’s something exciting about pulling strangers.

You can find out more about domestic teams and competitions from the Spanish Armwrestling Association or Asociación Española de Lucha de Brazos website, www.aelb.es.

If you’re looking to pull in Madrid, then check out the Pulling Wolf armwrestling club on Instagram @pulling_wolf_team. Or, if you fancy pulling here in Mallorca, download the Armbet app, and send me a private message.