Some years ago a Canadian friend used to send me clippings from Toronto newspapers that included lots of restaurants reviews. These were extremely interesting partly because I was able to spot new trends that had yet to reach Europe.

Another thing I took note of, and it happened frequently, was the critics’ complaints about slow service. Sometimes the wait for a menu was as long 20 minutes. And it took longer for some of the dishes to arrive.

In my experience that doesn’t happen at Palma restaurants. The menus arrive within a couple of minutes and the waiter is there to take the order long before I’ve had time to decide on a couple of starters.

But at today’s restaurant it seemed I had finally found a place with snail-like service. When I arrived at 1 pm I told the waitress I’d made a reservation for two but I’d be on my own as a friend couldn’t make it.

Within a minute of sitting down she returned with the menu and asked if I wanted a drink. I said I’d wait, meaning until I had started to eat.

I had a look at the €15 menú del día and within a minute I knew what I’d be ordering. I then sat back to wallow in the lovely cool air-conditioned temperature of the dining room…doing chess problems.

I had a book of problems based on the endings of grandmaster competition games. They’re very difficult (way above my knowledge of the game) and not the easy-peasy mates in two or three moves in the Bulletin.

The most I can hope for is to find the first move, crucial in these problems because it quickly leads to the other player’s downfall. I then look at the solution and play out the final moves, learning a little about how grandmasters think.

I got so intently involved in the chess problems, while lapping up the cool temperatures, that I was totally unaware of the passing minutes. By the time I looked up an hour had gone.

It turned out that because I said I’d wait before ordering a drink, the waitress thought I was lingering to see if my friend showed up…and didn’t want to disturb me because I was so deeply involved in the book I was reading.

The meal then got off to a superb start with a delicious warm goat’s cheese salad that included a mix of greens, little slices of orange, diced strawberries and cherry tomatoes, with a trickle of fig confiture on the disc of goat’s cheese. A most successful dish.
The same cannot be said of the canelones. The pasta was all right and so was the bechamel sauce, but the meaty filling had been blender blitzed until it was reduced to a not very pleasant paste that tasted of nothing. 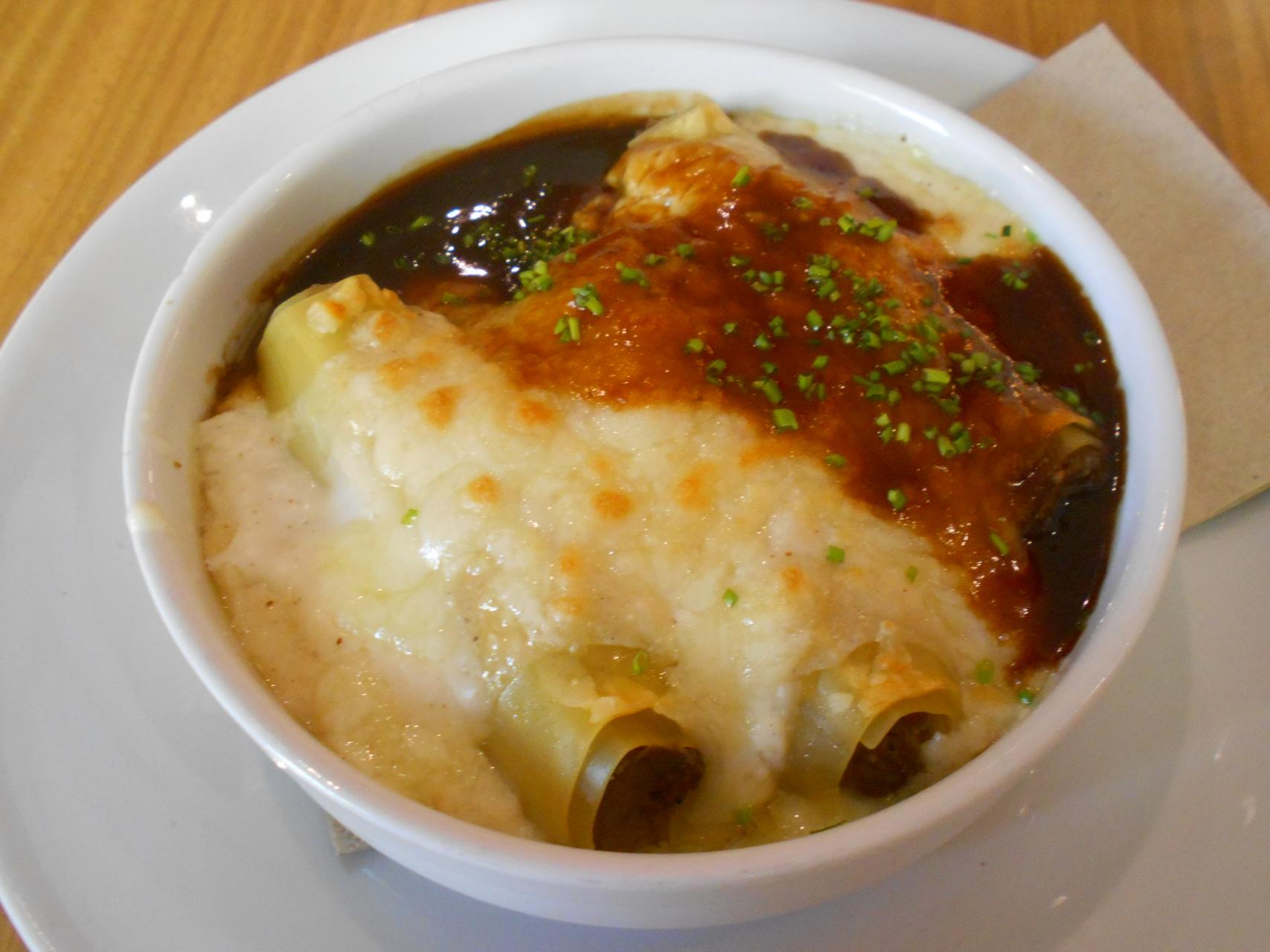 The cooks should give this dish a bit of careful and objective examination because it is not up to the high standards we have come to expect from Naisa’s kitchen.

But everything came back to normal with an absolutely magnificent bacalao a la riojana, done in a rich tomato sauce, with scrummy sliced potatoes and roasted cherry tomatoes.
It was a most generous slice of bacalao and the kitchen had made it totally memorable by cooking it to the point of sheer succulence. This salt cod flesh couldn’t have been juicier. It was awarded an immediate 10-out-of-10. 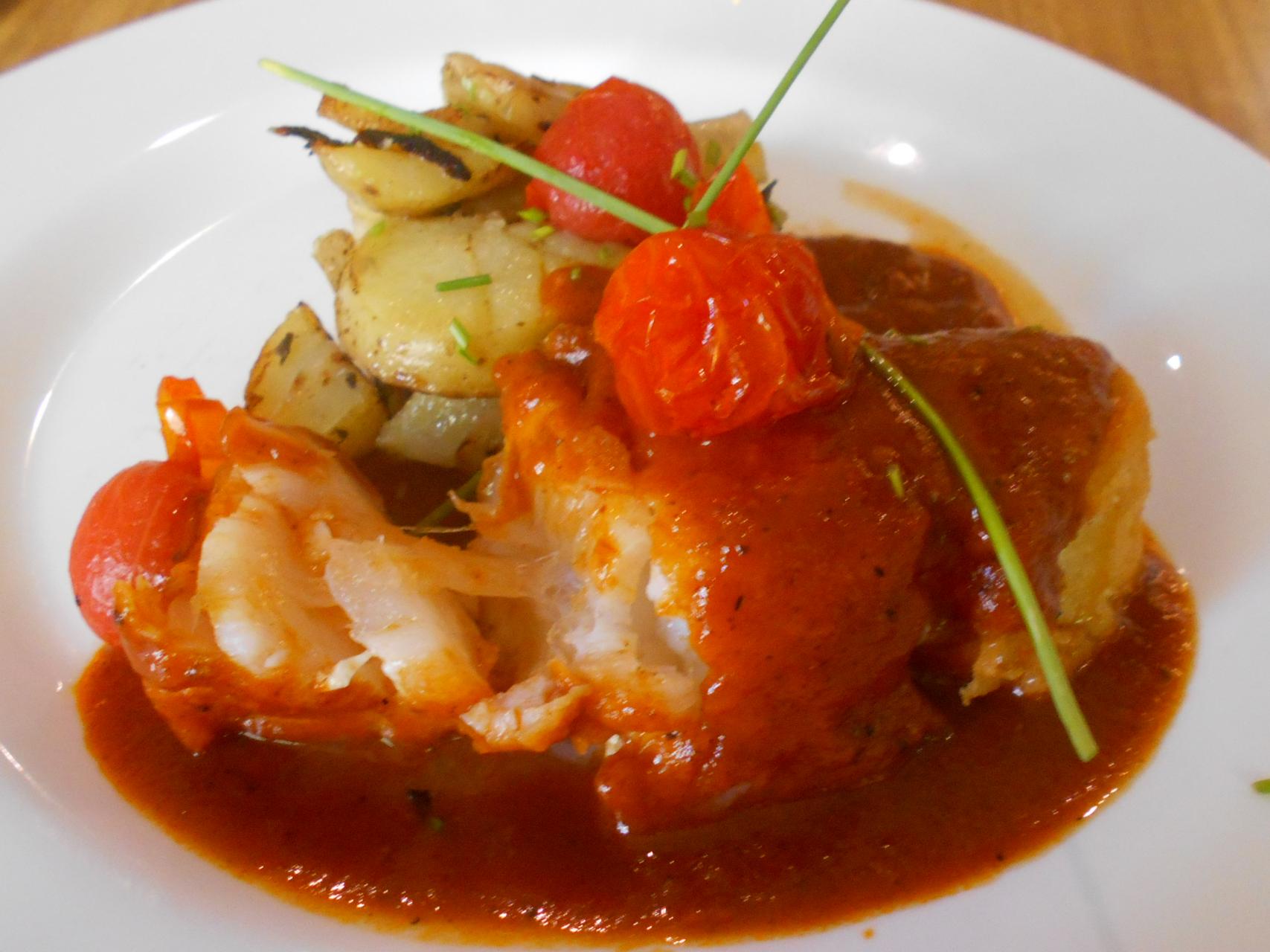 Some restaurants are streaking ahead of others in the race to have the best desserts on menús del día for around €15. Half a dozen have one really fine dessert on offer and at least four places I know of have a sweet duo that is up to the best à la carte standard.

Just two weeks ago I wrote about two splendid offerings at Sky Bar of the Hotel Almudaina in Jaime III, with spectacular eighth floor panoramic views of the Cathedral, old parts of town, and the port — all included in the €15 price of their Monday to Saturday menú del día. In many ways it’s the best deal in town.

Then there’s Maribel Moll of La Bodeguita del Centro in Calle Carmen (off La Rambla). Look out for her baked desserts, especially the mini tarte tatin which is quite extraordinary. And she does it all on her own.

And I mustn’t forget Marcella, the wife of Michele Caporale, who runs the dining room and does the desserts for La Bottega. She has the best tiramisu I have ever eaten.

An out-of-Palma cook with a Michelin star does a tiramisu at her Palma place that didn’t get a pass mark. But Marcella always gets a 10 for her incredible version of this famous Italian dessert. 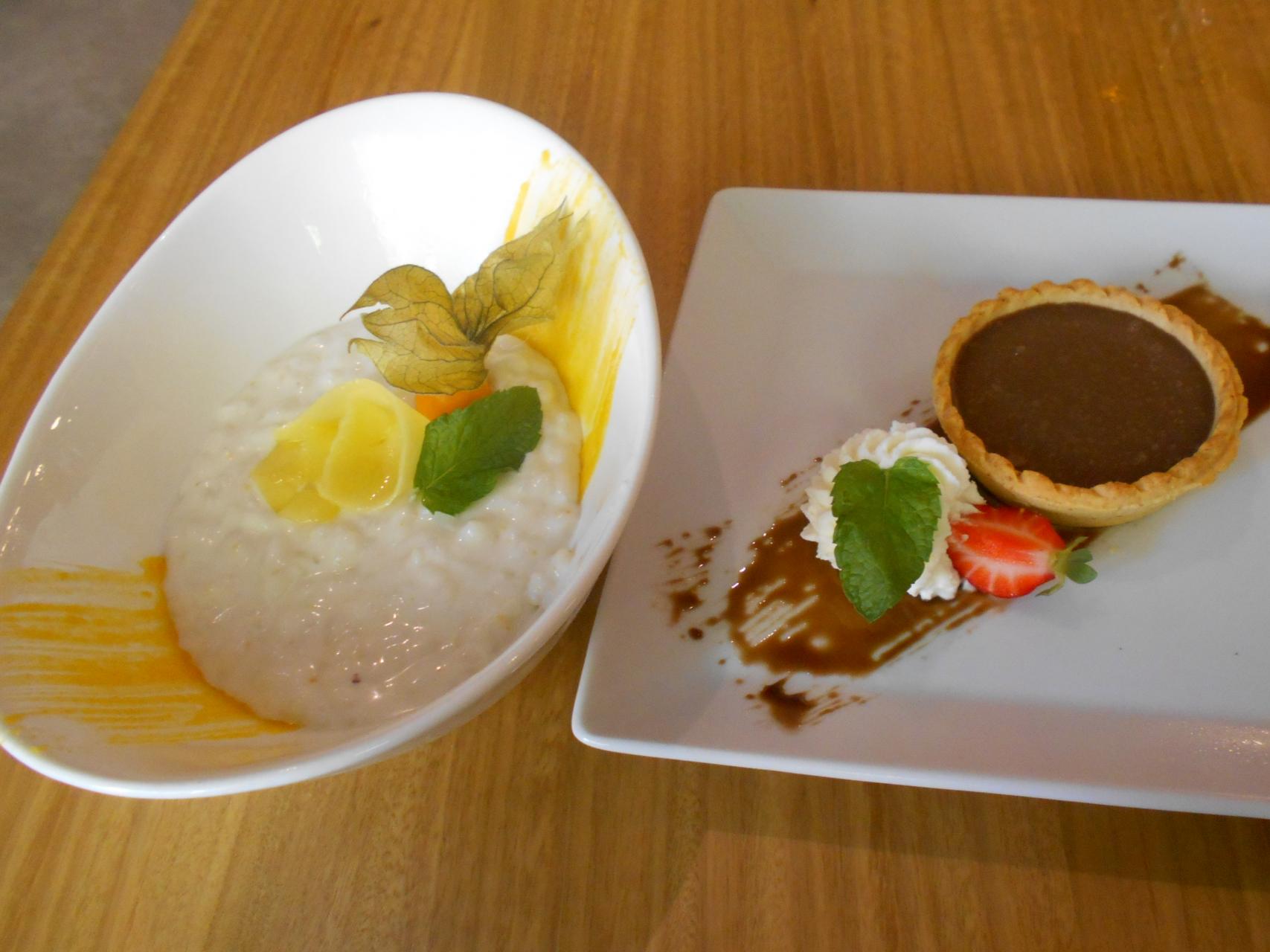 If I had to give a prize to the best desserts I know of on €15 menús, it would have to go to the cook (or cooks) at Naisa. They put a great deal of thought and culinary know-how into their desserts, which are always lovely surprises.

Take a look at this week’s duo: the picture alone tell us that these two desserts are something special. They were an unusual version of baked rice (arroz con leche, in Spanish) and an unforgettable little chocolate tart.

I adore baked rice but only eat it a couple of times a year when I have lunch at my daughter’s — or come across it on restaurant menus…when I always order it.
The Naisa baked rice was different in that it came with coconut flavours and ribbon-thin strips of mango about the width of pappardelle pasta.

The rice was nicely al dente and was served in an unusual bowl topped with an orange coloured physalis (Cape gooseberry) with its lovely dried-out gauze-like calyx. I gave it an immediate 10 rating.

The other dessert was much simpler — but no less delish: a simple chocolate tartlet whose excellence depended solely on the quality of the tartlet pastry and the smooth chocolate filling. Both were quite perfect in texture and taste and this dessert was another 10.

The €15 menu del día at Naisa is not only economical and highly recommended, it is also the best bargain in town. The warm goat’s cheese salad (with its trickle of fig confiture) would have an à la carte price of €10-€12 in other restaurants. Both of the desserts would be marked at €6.50 elsewhere.

And in any of the city’s restaurants specialising in salt cod, the bacalao a la riojana would be priced at €17…and this was a €15 menú del día. They served a thick piece of salt cod done in a lovely tomato sauce with roasted cherry tomatoes and nicely lubricated sliced potatoes that were either sautéed or done in the oven.

An exceptional dish that was worth a 10 rating. Both desserts were superior and a lot of work went into them. But it was worth it — customers like to end a meal with 10-rated desserts.

Restaurante Naisa, Calle Simó Ballester 6 (next to the National Police headquarters). Tel:971-211746. The €15 menú del día is served from Monday to Saturday and changes every week.

The restaurant can get very busy because it is used by hotel clients, so it’s always best to reserve a table.

As I had to order extra dishes to get the five pictures I need for the review, I ended up having another mains and dessert. That came to half a menú del día (although I couldn’t manage the extra caña) so the final bill came to €25 with VAT.