Mallorca’s most faithful visitor was back this week and much in evidence at the Mercat d’Olivar as well as other municipal markets and supermarkets. It is the llampuga, a migratory fish that has been coming to island waters for thousands of years.

In the beginning fishermen started to catch the fish about mid-August and for as long as they remained in this part of the Mediterranean. But there is now a fixed season that officially runs from 25 August to 31 December. 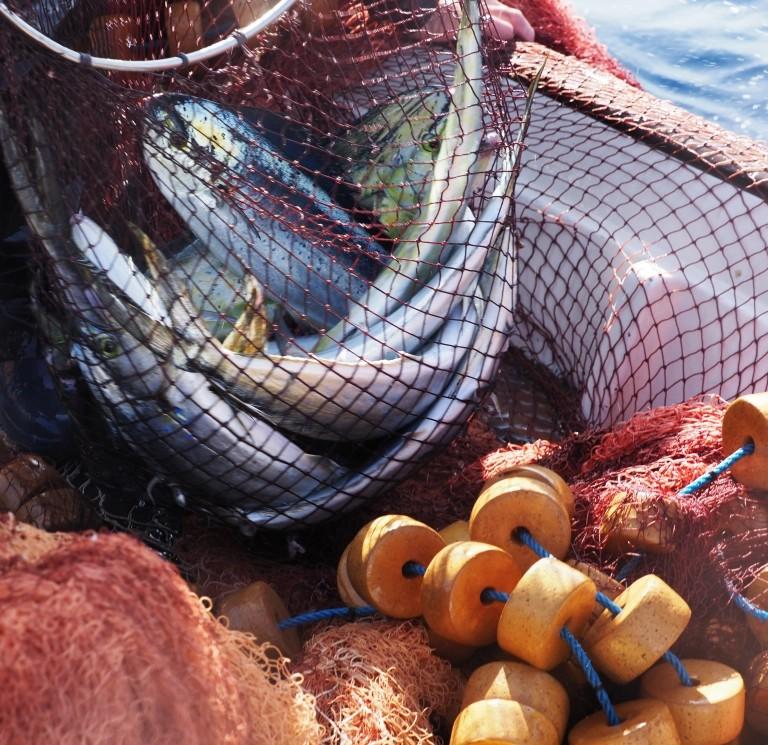 The first llampuga at the Mercat d’Olivar are usually quite highly priced — but last week the €15.90 a kilo tag was more than a little bit off-putting. I also saw it at €16.95 but Mercadona had it at a more reasonable €12.95.

The price usually starts to drop in the second week and it should settle at below €8. If it doesn’t, the fishmongers are going to be eating a lot of llampuga — or throwing it away.

The llampuga migrates from African waters to Mallorca and elsewhere in the Med, not because its DNA tells it to but because it follows the sun — in search of waters with the right high temperatures. The Med gets warm enough in the summer months and is the llampuga’s ideal habitat. Gigantic shoals of the fish come up from the African coast, swim through the Straits of Gibraltar and the Med becomes its new home for a few months. 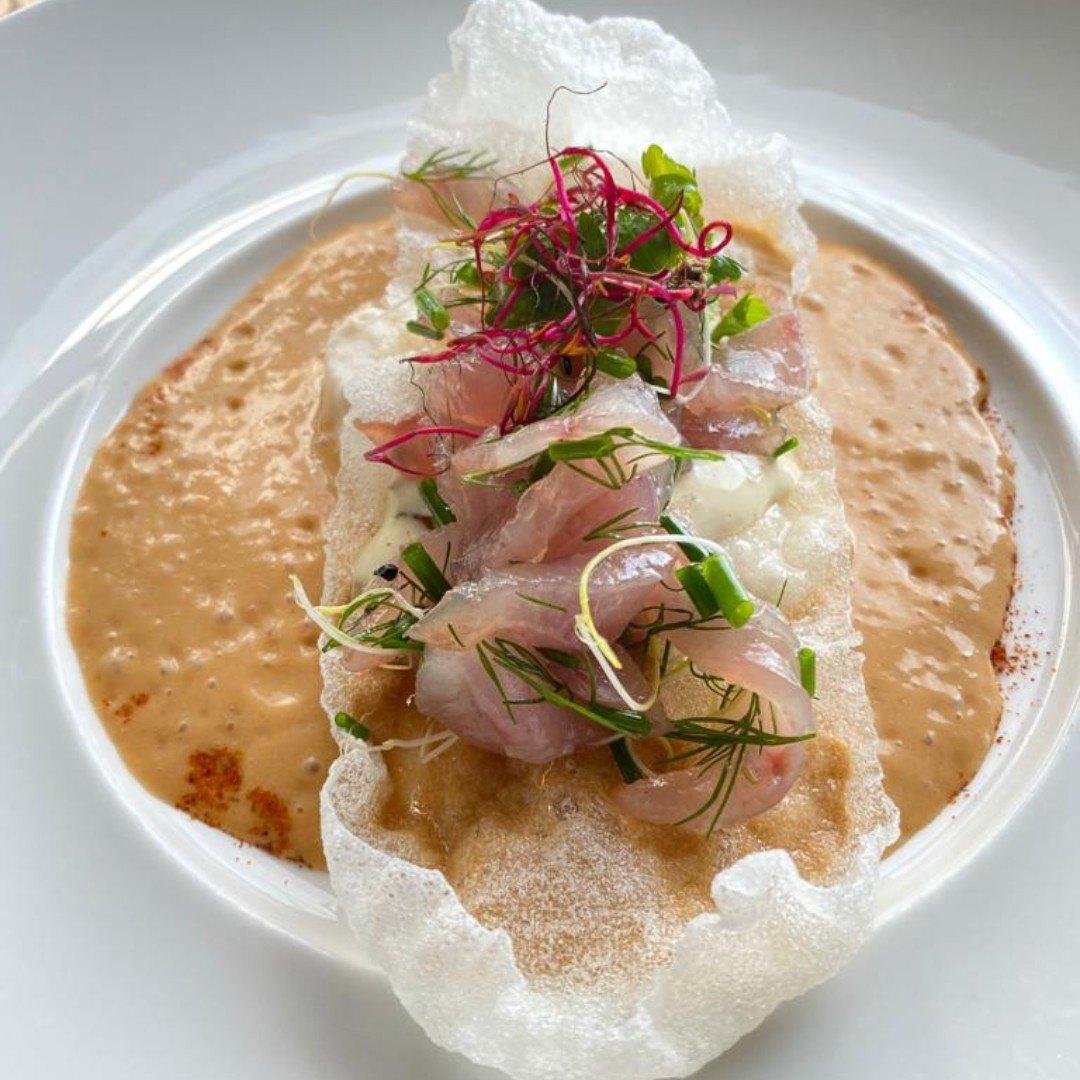 Vast quantities of them settle down in the Ibiza and Mallorca areas and some head for the shores of mainland Spain. Others swim further along the Med and get as far as Sardinia, Sicily and Malta. The llampuga, which is called lampuka in Malta, is so highly esteemed there that the fish is featured on a Maltese coin.

The length of the llampuga’s stay in the Med depends entirely on the weather: as long as the water is at the temperature it needs for survival, the llampuga doesn’t think of moving elsewhere.

But as soon as the temperature starts to drop in the Med, the llampuga becomes a migrant again and heads back to Gib and on to waters off the African coast that will be at the right high temperature. 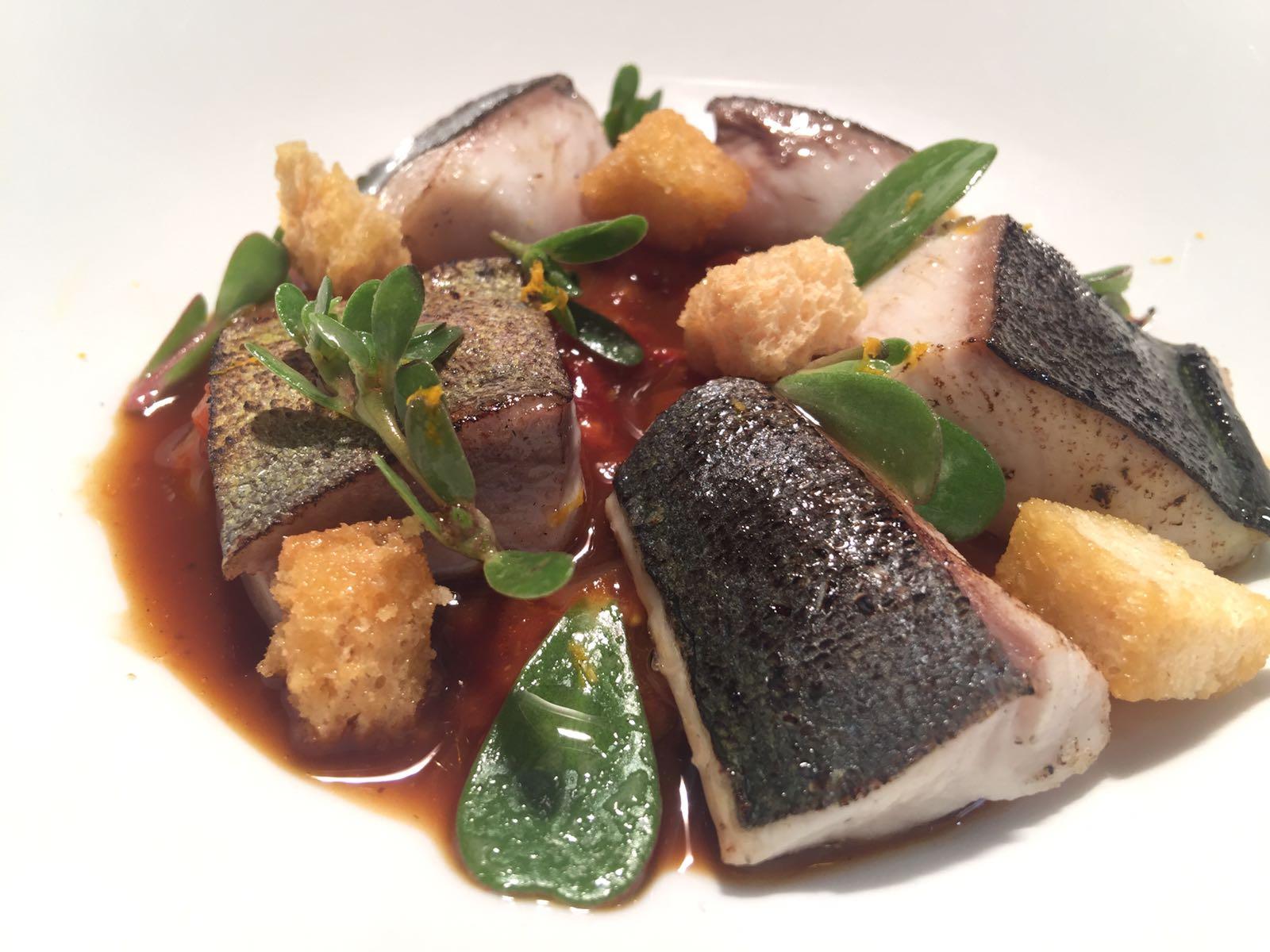 Catalán marine scientists studying the llampuga and its migratory ways, say that global climate change, which is raising the temperature of the seas and oceans, will almost certainly suit the llampuga because it loves the heat.

The llampuga is one of the easiest fish to net because of a lifestyle quirk: it likes to shelter under anything floating on the sea as the temperature there is much more to its liking.

Ancient Greek writers were the first to notice that llampuga could always be found basking around half-sunken ships and other large objects floating on the sea.

Thousands of years ago fishermen realised that the llampuga luxuriating in the warm waters under floating objets were an easy target and it didn’t take them long to devise a way to net them.

Today’s fishermen use the same method as that invented thousands of years ago in Greece. About the middle of August Mallorcan fishermen lay floating platforms on the sea.

They are made of chunks of cork tied together with nylon rope and anchored to the seabed. Clumps of mastic tree are attached to the platforms so they can be seen easily seen from a distance. Once the platforms are in place the fishermen are in business.

The catch, which can be carried out at any time of the day, or even at night if there is a full moon to provide some light, begins when the fishermen detect a shoal of llampuga under a platform.

A seine net is passed under the platform and pulled aboard from both ends of the boat. The catch is hauled over the side with mechanical leverage equipment. 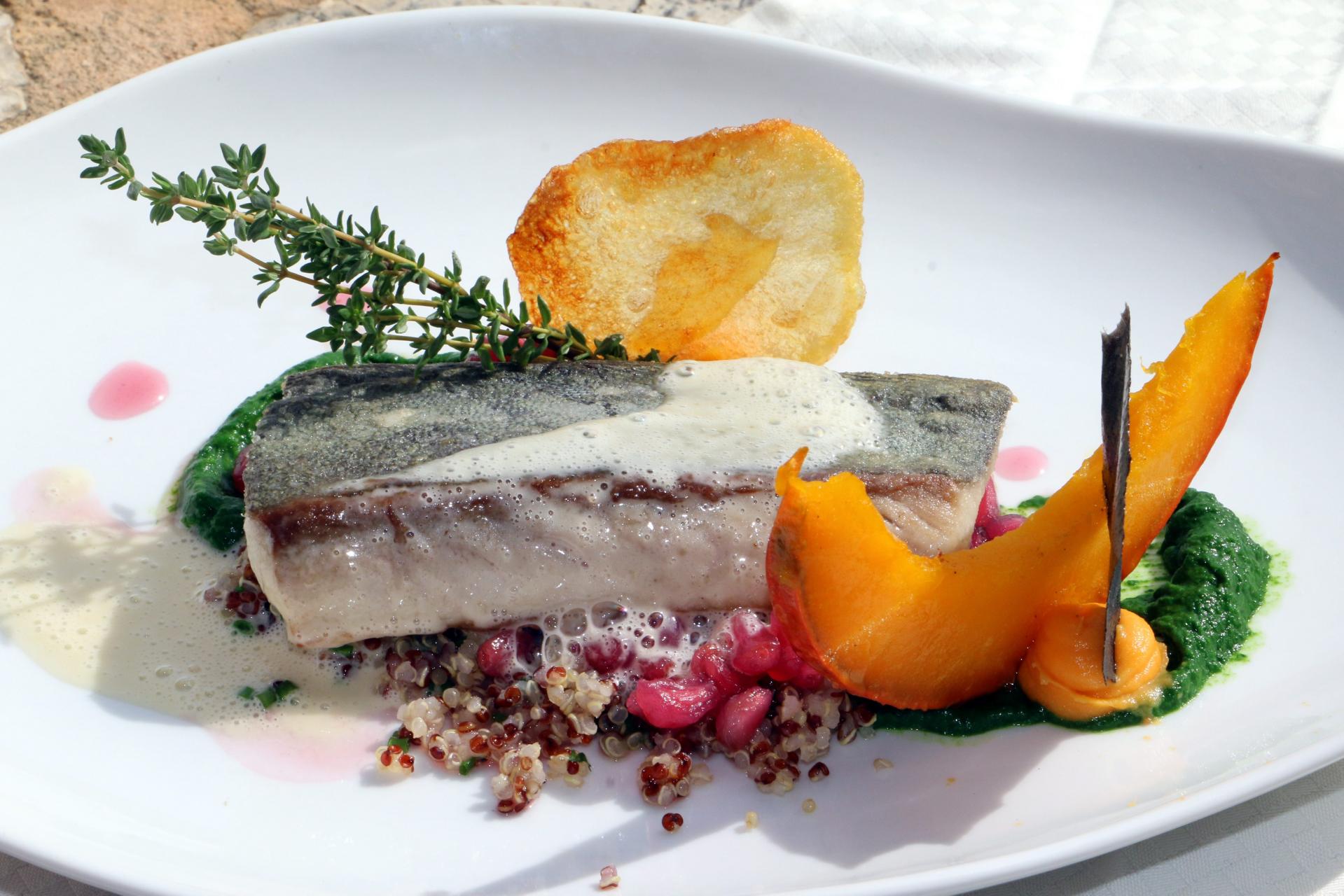 There are usually only a couple of fisherman aboard, although there can be up to four depending on the size of the boat. The entire operation takes only 10 to 15 minutes.
The fishermen then work their way round their other platforms and will also stop to check if there are fish under any large pieces of wood or plastic.

Four or five other species of fish also like to bask under the floating platforms, so a day’s work often nets a very nice and varied catch.

The best places for llampuga fishing are the north coast (Puerto Sóller and Puerto Pollensa), the east coast (Cala Ratjada, Porto Cristo, Porto Colom and Cala Figuera) and the south coast (Colonia Sant Jordi, Palma and Puerto Andratx) and in that order.
The north coast has the biggest catches during September and October but by November it is becoming too cold for the llampuga shoals so they start to head towards the Straits of Gibraltar.

Although the official season runs to 31 December, it slows down to a mere trickle long before that. The few llampuga still being caught at the end of November are those at the tail end of the migratory swim towards the warmer waters off the African coast.

If you want to make the most of the llampuga’s relatively short season by doing some dishes at home, you will find it an easy fish to handle and cook successfully. It is one of the blue fish family and its oily flesh makes it ideal for frying, grilling and baking in the oven. It also contains a good amount of omega-3 which all doctors and nutritionists recommend.

Llampuga is popular all over the Mediterranean and each areas has special recipes, although it is also suitable for use in most mackerel and tuna recipes. The five main centres for catching and cooking llampuga are Majorca, Ibiza, Malta, Sicily and Sardinia. Each place makes use of ingredients available locally, so they have quite different ways of cooking the fish.

Mallorcan and Ibizan recipes combine llampuga with red peppers, one of the most successful ways of cooking it. The thick red peppers that are ideal for roasting are also in season during the summer. They are called pimientos de asar. 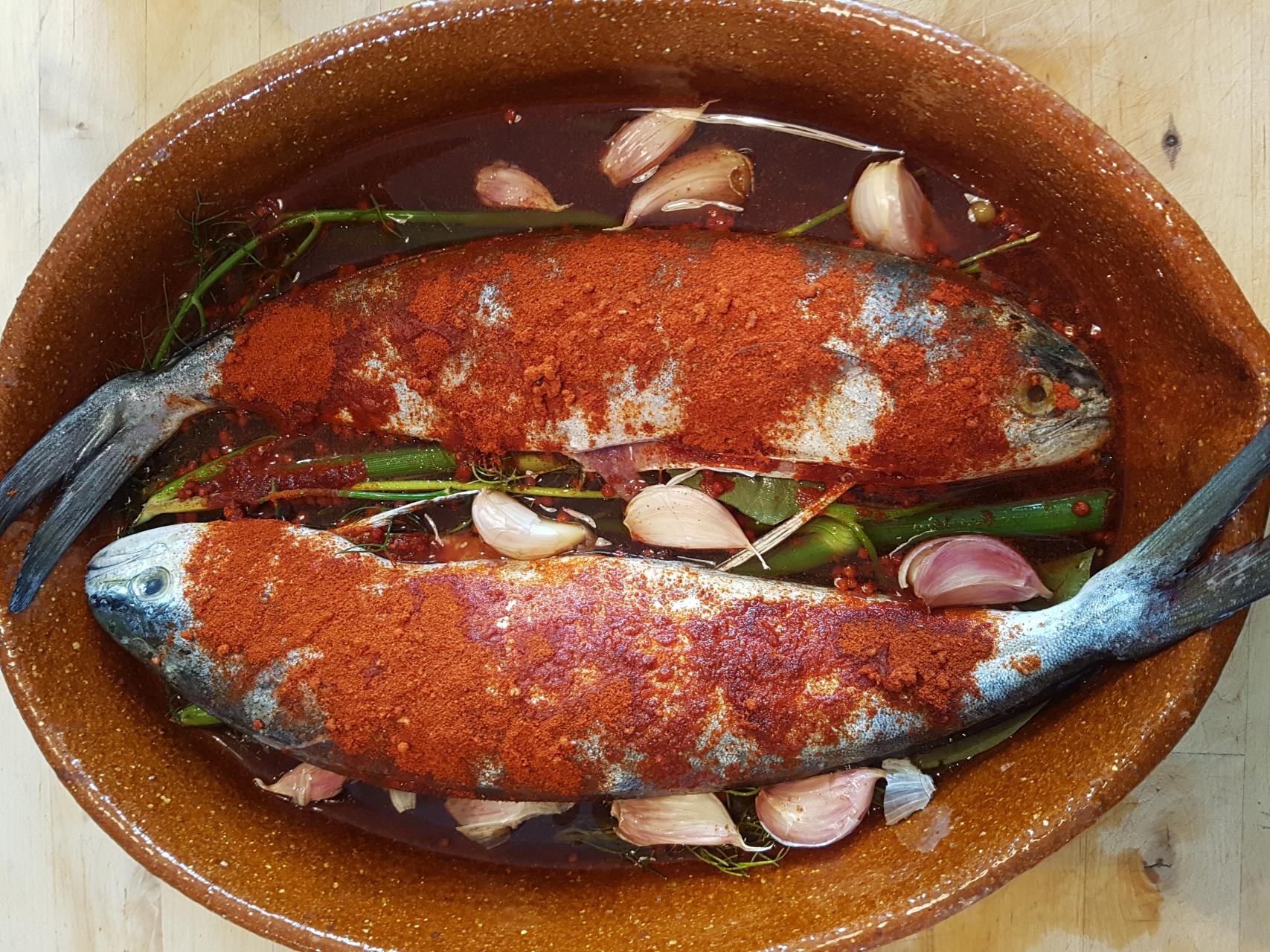 One of the hallmarks of local llampuga recipes is that they are simple and quickly made — which is the best way to deal with all fish and shellfish. This simplicity can be seen in the favourite Mallorcan way of cooking llampuga: fried or grilled with red peppers. The dish is called llampuga amb pebres.

In the most classic version of this dish, thick slices of llampuga (at least 4 cms thick) are marinated in lemon juice and salt for a couple of hours. The pieces of fish are dried and grilled, over charcoal when possible. Great care is taken to ensure the fish remains juicy, one of the reasons for cutting it thickly.

The pieces of fish are transferred to a serving dish and then covered with a copious amount of fried or roasted red peppers cut into strips. If the llampuga remains moist and tasty and the red peppers are softly luscious, this is an exquisite dish.

Some Mallorcan cooks add an extra layer of succulence by napping the fish and peppers with thick tomato sauce. This is one of those occasions when canned tomatoes simply won’t do. The best tomatoes for this dish are the local variety known as remallet, those that hang on strings at market stalls.

This sauce for pouring over the slices of llampuga with strips of red peppers is unusual in that no flavourings are used: no parsley, no garlic, no bay leaves or any other herb. Just fresh tomatoes and virgen extra olive oil with salt to taste.

In local restaurants, llampuga amb pebres is the most common way of dealing with this fish, but Mallorcan housewives use other recipes for it. These include baking it, especially towards the end of the season when the llampuga are especially large.

They cut the llampuga into thick steaks that are marinated for a couple of hours in virgen extra olive oil, lemon juice, salt and pepper. The pieces of fish are placed on an oiled baking sheet and covered with a moist mixture of sautéed veggies.

As there is no set recipe for this vegetable mix, most Mallorcan housewives use what happens to be at hand. It could be finely chopped onion, grated lemon peel, a little chopped tomato, pinenuts, a small amount of grated carrots, chopped spring onions, celery leaf or breadcrumbs.

A variation on this idea is to cover each steak with a vegetable mixture and fresh herbs of your choice and then wrap them in tinfoil before baking them. This is an easy and surefire way of preparing any fish so that it will be juicy and full of flavour.

When large llampuga are available at the end of the season, some cooks like to stuff them with minced pork, which is sautéed and flavoured with finely chopped garlic, salt and sweet paprika (pimentón dulce).

The stuffed fish is bake in a dish with olive oil, chopped onions and tomatoes, plus a small amount of water. When the stuffed llampuga is cooked through, it is transferred to a hot serving dish.

The vegetables and juices in the baking dish are blitzed in a blender and poured over the fish, which is served with boiled potatoes.

Mallorcan housewives make full use of the llampuga season by including the fish in local dishes that are usually associated with other ingredients. In some homes, for instance, thick slices of llampuga are added to sopes mallorquines.

Ibizan cooks slice the fish into sections of 4 cms and marinate them in lemon juice and salt for a couple of hours. The pieces of llampuga are floured, fried and transferred to a serving dish and sprinkled with a little finely chopped parsley as well as sweet paprika (pimentón dulce). A thread of virgen extra olive oil is drizzled over each piece of fish, with the final addition of a few drops of lemon juice.

Another Ibizan recipe fries the fish in the same way but leaves out the parsley and the sweet paprika.The pieces of llampuga are served with a salad of thinly shredded roast peppers dressed with virgen extra olive oil, finely minced garlic to taste and salt.
The Maltese are so enamoured of llampuga that it adorns one of the island’s coins.

They also have several special recipes, one of them being a pie with a filling of fried llampuga steaks in a sauce made with celery, capers, green olives, onions, tomato purée, wine vinegar and olive oil. Recipes don’t get much more Mediterranean than that.

You will also find splendid Mediterranean recipes in Sardinia and Sicily. The Sardinians make it escabeche style, the floured and fried pieces of llampuga dressed in a vinegar mixture that helps to preserve the fish.

Sardinians also fry llampuga steaks in olive oil with chopped walnuts and raisins, two of the most popular ingredients in Sardinian cooking.

Sicilians have dishes in which llampuga steaks are cooked with tomatoes, garlic, capers, raisins and pinenuts, another traditional Mediterranean mixture, this time with Arab influences. Some Sicilian llampuga dishes also have the distinct sweet and sour taste that is characteristic of the island’s cooking.