Quite a few people I know have good basic culinary skills but for some reason they have never been able to produce a moist French-style omelette or a plain al dente long grain rice. Sometimes it’s the simple dishes that are most problematical.

Last week two friends in the Ultima Hora advertising department told me they long ago gave up trying to make pesto sauce for pasta because they could never get it to come out smooth but with a good granular texture. And I always thought there was nothing mysterious about making a decent pesto.

It’s true that doing a pesto can be somewhat laborious when using the traditional method: in a mortar and with a pestle to pound the basil leaves, garlic, pinenuts and blend them with grated grana padano cheese and virgen extra olive oil.

But it’s not such hard work if you have a large mortar and a pestle of a decent size: mine is wooden, 25cms long, with a head that’s 18 cms in circumference and a weight of 250 grs. For the ingredients of a traditional pesto it’s an arm of massive destruction.

I know many people, especially non-Spanish residents, whose mortar is the size of a teacup and with a pestle that’s hardly big enough to pound a couple of peppercorns. In my circle of friends and acquaintances there are also some people who throw tradition out of the window and put the pesto ingredients into a blender and blitz everything at full speed until smooth.

They produce a pesto with the right taste but with a texture that’s ideal for babies who have gone on to their first solid food — but not for a pesto, an elegant sauce that also calls a characteristic robust texture.

For my Ultima Hora friends who have thrown in the towel and no longer even attempt to pound the pesto ingredients with a mortar and pestle, I offer a little trick that makes it a good deal easier. If you don’t have a proper heavy-duty pestle, which is essential for reducing the basil leaves to a paste, you can take a little shortcut that will still give you a sauce with a good granule touch.

Shred the basil leaves, put them into a suitable cylindrical container, add sufficient virgen extra olive oil to cover, and use a hand-held electrical blender to reduce them to a thickish pulp — but without turning the mixture into a smoothie-like paste.

You then pound the garlic and the pinenuts in the mortar, which is easy-peasy even with a smallish pestle. To this mixture you stir in the blended basil and oil and add enough grated grana padano cheese (or parmesano if your budget runs to it) until you have the desired consistency. 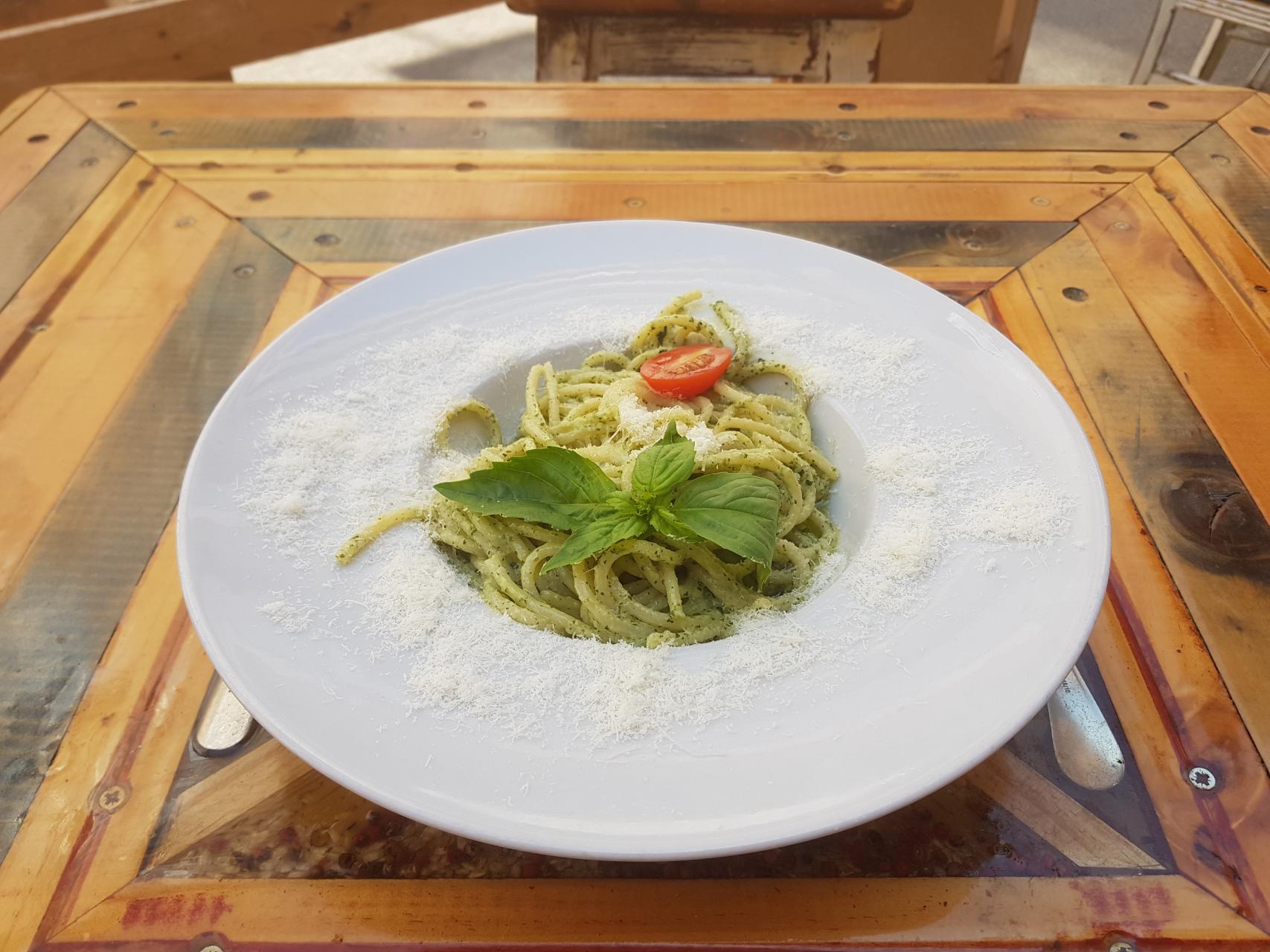 The sauce should be somewhat thick (never runny) but if it is too dense you can always stir in more virgen extra olive oil. If my friends do a pesto like that they will understand why Elizabeth David, Britain’s foremost food writer of the 20th century, said that pesto is one of the best sauces ever invented for pasta.

Although what Mrs David actually wrote about pesto in her book Italian Food was: “As made in Genoa, it is certainly one of the best sauces yet invented for pasta.”

Note those words “as made in Genoa”. The implication is that the best pesto you will ever eat is one made in Genoa. There are two reasons why the Genoese make such fine pesto. One is that they invented the sauce and the other is that Genoese basil is extra special.

The Genoese cultivate a sweet basil with a much bigger leaf. Until you have seen a leaf of Genoese basil you have no idea of how huge these leaves can be. And they give aromas and flavours you don’t find in other varieties.

I recommend you buy your basil at the only plants stall in the Santa Catalina market and get their large-leaf variety —although it’s tiny compared with Genoa’s. The small-leaf basil sold here is nicely fragrant and also makes good pesto but it is fiddly to work with.
The quantities of pinenuts, garlic, grated cheese and virgen extra olive oil you use depend entirely on how much basil you have — as well as on personal taste.

My preference is for intense basil aromas and flavours so I use handfuls of it and less of the other ingredients. When I feel like splashing out and being very Genoese, I add double my usual amount of pinenuts. 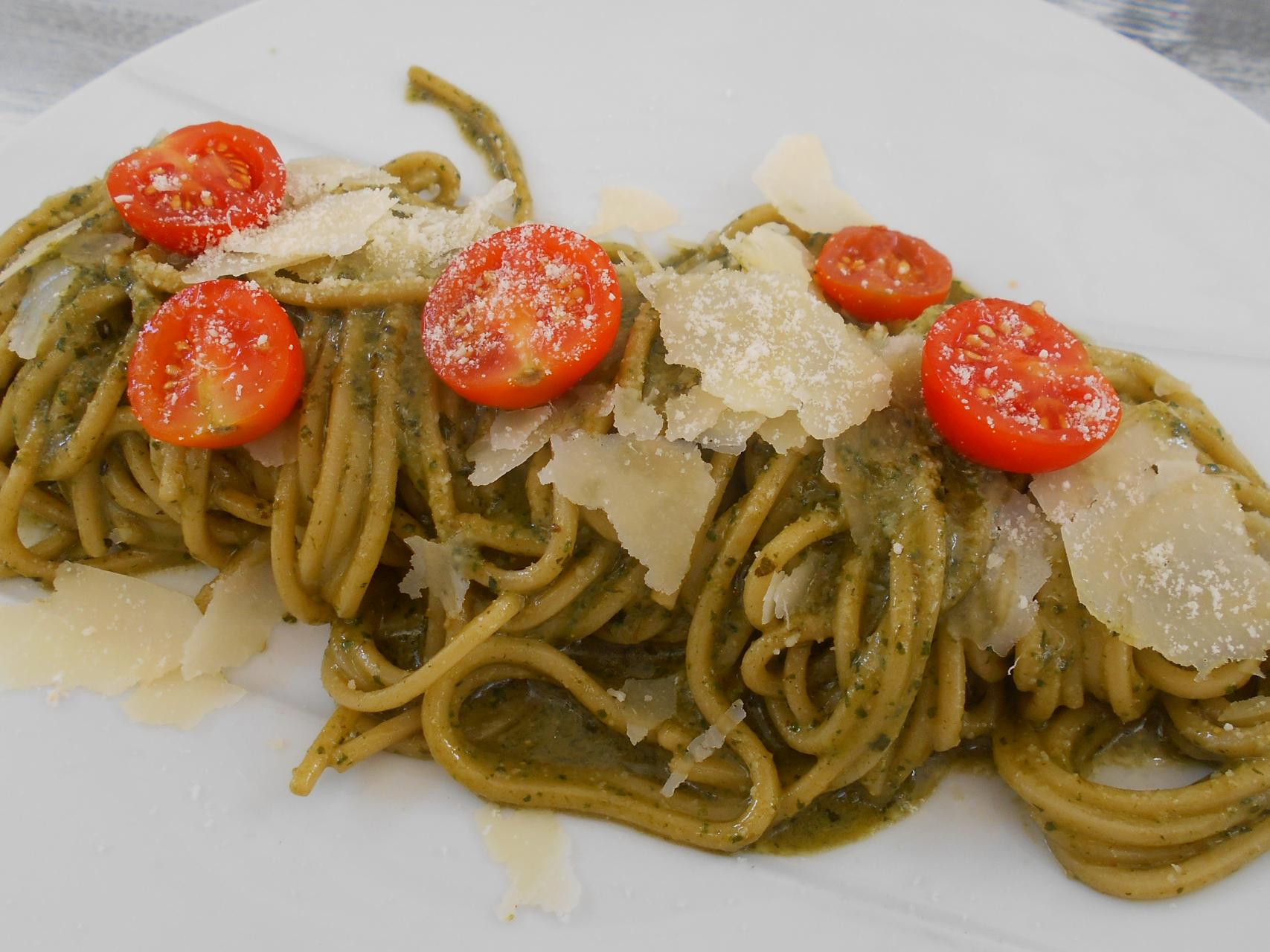 Some people, including Italians and especially Sicilians, use walnuts instead of pinenuts and they are perfectly acceptable and so are almonds — but the result is not a genuine pesto.
Walnuts give the sauce a robust rustic flavour and texture, and are worth trying.

You should simmer the walnuts for five minutes to get rid of the skins. Almonds give a more elegant finish and they, too, make a nice change. But don’t call it a pesto unless you’re using pinenuts.

The authentic parmigiano reggiano cheese is the only one acceptable for a Genoese pesto but others can be used to good effect — although the result will not be a true pesto.
The Genoese used a Sardinian cheese called Pecorino Romano which has DOP status guaranteeing its place of origin. You can get this cheese at the Club del Gourmet of El Corte Inglés at €5.70 for a 200 grs piece.

Over the past couple of weeks I’ve been sampling genuine pesto sauces at Italian restaurants in the centre of Palma and each dish was quite splendid but also quite different, especially in the presentation.

Michele Caporale of La Bottega in Calle Fábrica (Tel:971-454892) has an Italian supplier who sends him the most magnificent and elegant burratas and Michele uses them to great effect in all kinds of dishes including tagliatelle with pesto (€16).

The burrata, a slice of mozzarella cheese filled with thick cream and formed into a dumpling-like shape, is taken straight from the fridge and placed atop a portion of tagliatelle with pesto.

This produces splendid flavours and the contrasts of temperatures between the cold burrata and the hot tagliatelle is quite sensational. It makes for a lovely summer dish.
In the nearby Bianco e Rosso, on the other side of Calle Fábrica (Tel:971-905015), Manuel Caporale (Michele’s son) offers a dish of spaghetti with pesto that is quite different (€14).
He uses more pesto than you usually get at Italian restaurants: this pasta was very nicely lubricated and very much to my taste. I thoroughly enjoyed it on a sunny day with delicious breezes wafting along Calle Fábrica.

He serves it in the best Italian style with enough sauce to moisten the pasta but without inundating it. Italians prefer their pasta dishes without scads of sauce, thus giving the pasta the leading role. I’m much in favour of that policy: I’m such a pasta freak that I can eat it without sauces of any kind.