In the past I have refrained from reviewing menús del día because they were a kind of stop-gap solution to an everyday problem: giving a reasonable meal at modest prices to those workers who don’t have time to go home for lunch.

I have always thought these meals, based mainly on Spanish home cooking, were a good deal for everyone concerned.

The restaurants had a guaranteed source of regular clients and the customers were served a most enjoyable meal from Monday to Friday at a price they could afford.

In order to produce these low-cost meals the kitchen had to cut corners — but at the same time trying to keep cooking standards as high as possible. And, under the circumstances, they were doing a fine job.

It would have been very unfair of me, or anyone else, to analyse a menú del día and write about any culinary deficiencies. No one looked for perfection in these dishes.
Friends sometimes tipped me off about places doing menús that were outstanding value for money and I wrote about them. But that was an occasional event.

Over the past three or four years, some restaurants started to raise their prices — and also went out of their way to produce dishes we didn’t associate with menús del día.
A few of them were even up to à la carte standard. And there were occasions when I was giving a menú dish a 10-rating — which means I could find nothing wrong it.

At first that was an exception, but it is becoming more common. That was very much the case at today’s restaurant. It was one of the best menús I’ve had for €14.50.
Of our six dishes, three were especially memorable and another was totally unforgettable. It was a longish strip of salmon cut from the thick area below the head. I have never had such perfect salmon.

I admire the cook’s chutzpah for sending out a piece of salmon like that. Most Mallorcans I know would have left it untouched or sent it back to be cooked.

Why did he undercook our salmon to that degree? I can only think he’s a good observer and a quick thinker. Three hours earlier I had stopped at the restaurant to look at the menú del día but it wasn’t posted.

The restaurant door was open but it was so early there were no waiters on duty. So I went to the bar and called out “Buenos días”. The head cook came out of the kitchen and I asked if there was a written menú del día available. There wasn’t at that moment, but he said he could recite it to me. He did so and I liked the sound of it. I smiled and nodded my approval and booked a table for two.

When he later saw we had ordered salmon, he must have assumed that someone who personally checks the menú del día before booking a table must be very meticulous about what he eats.

And that being the case, he probably thought, that person would want his salmon well and truly underdone. So it was bingo for him. And also for me.

Restaurant cooks never have enough time to do the thousand and one little chores needed to make everything run on well-oiled wheels. So they are forever having to take shortcuts to save time.

One of these time-savers entails preparing a dish up to a certain point so that it needs only finishing off when the order comes in. Pork spare ribs are seldom done from scratch. The restaurant buys in pre-cooked ribs (usually steamed or boiled) and the cook chargrills them or does them in the oven. 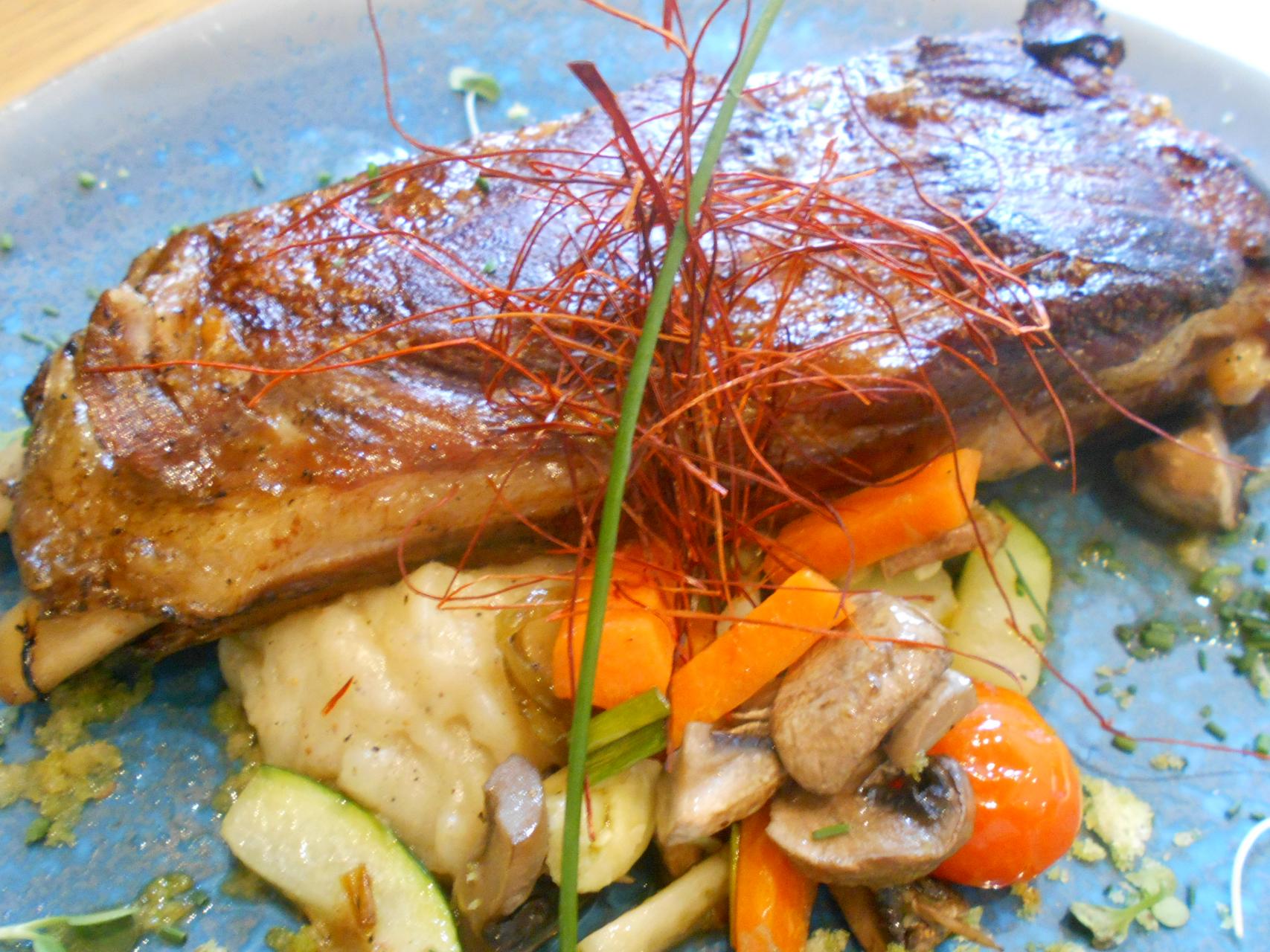 The waiter said their pork spare ribs were ‘marcado’ (started off on the hot-plate), not the best way of doing them because they can end up somewhat dry, tasteless and rather stringy.

But that didn’t happen at La Mémé. The ribs had a crisp crust on the top (from the extremely high heat of the oven or hot plate) and the interior was butter-soft and very delicious, the bones slipping out of place at the slightest pull.

I have no idea how they achieved this amazing fusion that produced such lovely textures and tastes, but it made these spare ribs a most delectable dish, even although the ribs were cooked to the nth degree.

The hummus with fish escabeche was a wonderful idea that worked beautifully: the chickpea taste of the hummus and the vinegar-flavoured escabeche were a very nice match.

This was a new combo (at least I’ve never come across it) and it was on its way to getting a 10. But serving it with sticks of cucumber, carrot and green pepper was very old hat and that lost vital points that left the dish well clear of the 10 mark.

The only disappointing dish was the other starter, broken eggs with camaiot, the Majorcan pork-based cold meat. It should have come with a couple of lightly fried eggs on top of the chips and the camaiot, but everything was cut up and mixed together. 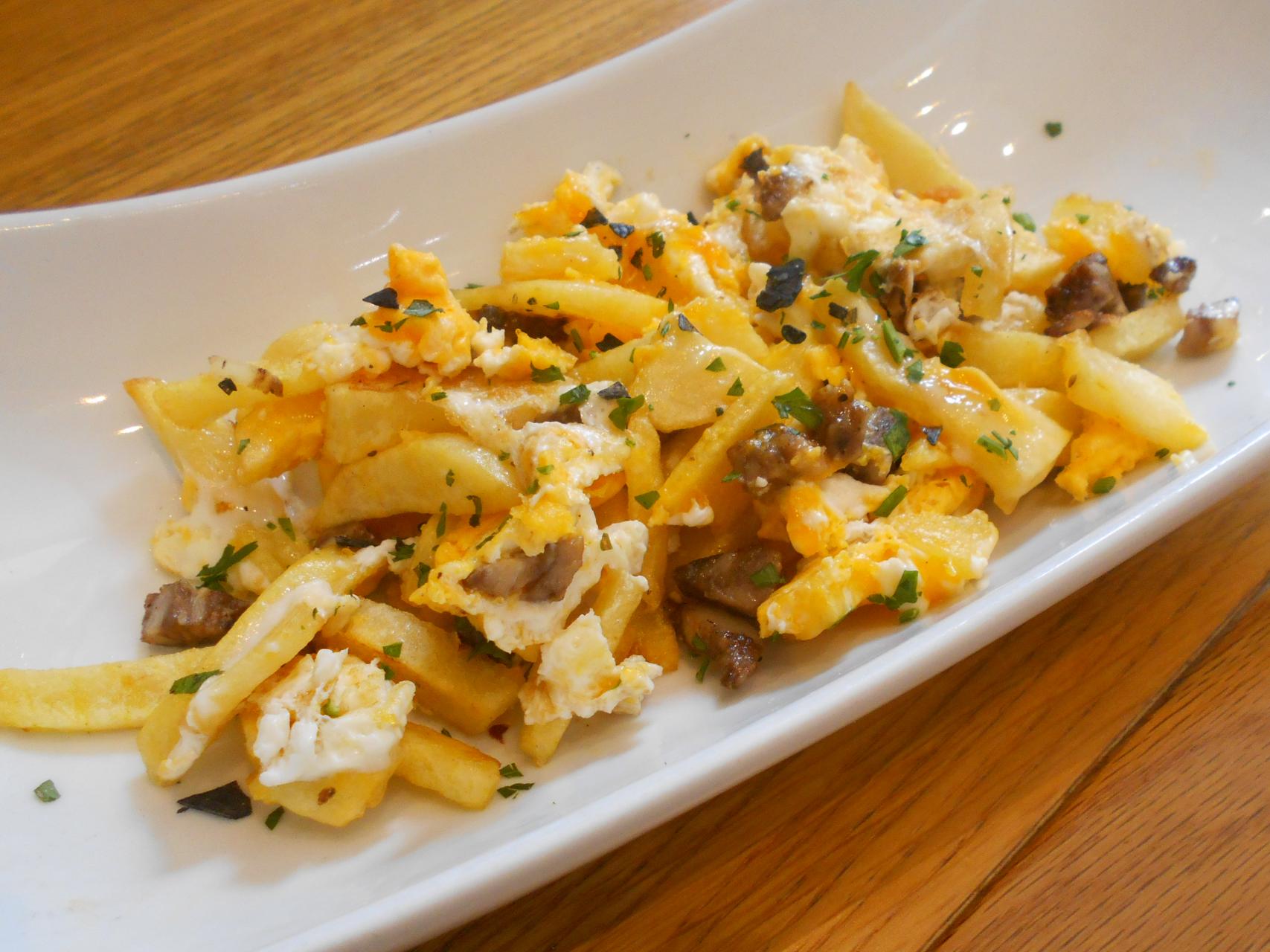 It is essential that the eggs be whole so the diner has the option of slicing them up. If not, then it is not a genuine broken eggs dish and diners would be justified if they rejected it. This was a shortcut version of the dish.

The meal finished with two superb desserts. The friend I was eating with is a banoffee freak and he said La Mémé’s version was one of the best he’s ever had.

As can be seen in the picture, the millefeuille was done with three wafers with a filling of two mounds of custard. This was also a candidate for 10-rating but the custard lacked the extra egg yolks that would have given it the necessary rich texture and taste required for a top-10 mark. 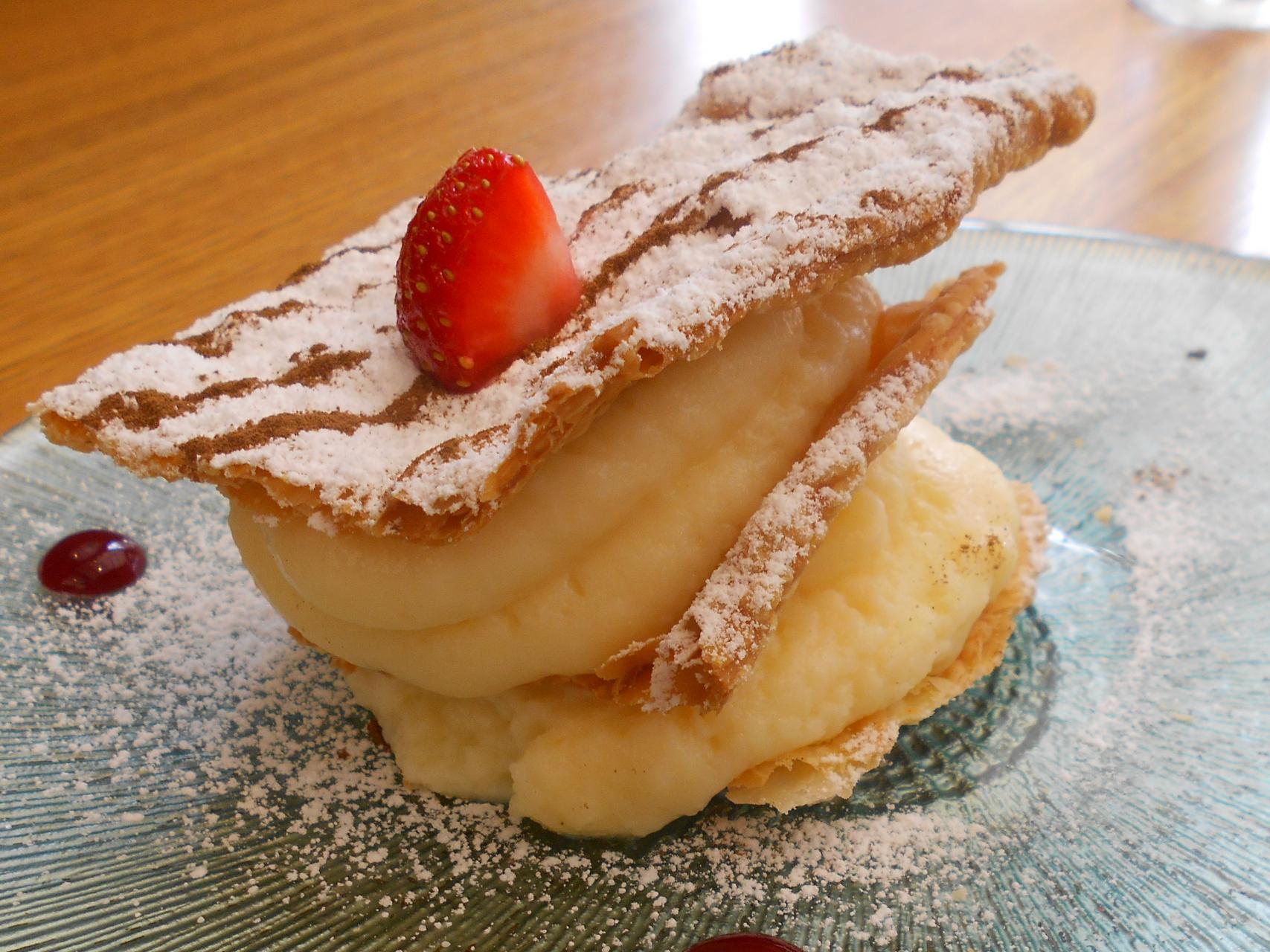 However, in the final assessment, this was a magnificent and highly delightful meal and one of the best €14.50 menús del día I’ve ever had. And I’ll be returning soon for a repeat of that incredible salmon dish.

I’ve eaten at La Mémé on two previous occasions (once à la carte and once a menú) and had most memorable meals. Eating à la carte can be a bit on the dear side if you order fish and meat dishes. But their menú del día has always been a great value for money. Of the six dishes we shared only the broken eggs with camaiot was a disappointment. We prefer our eggs to come whole so we can break them up ourselves.

That’s part of the fun when ordering this dish. The underdone salmon strips were sheer perfection, the best salmon dish I have ever had. You would pay up to €18 for this dish in other restaurants — and it wouldn’t be as perfectly cooked as this. It’s amazing that this 10-rated dish was part of a €14.50 menú. 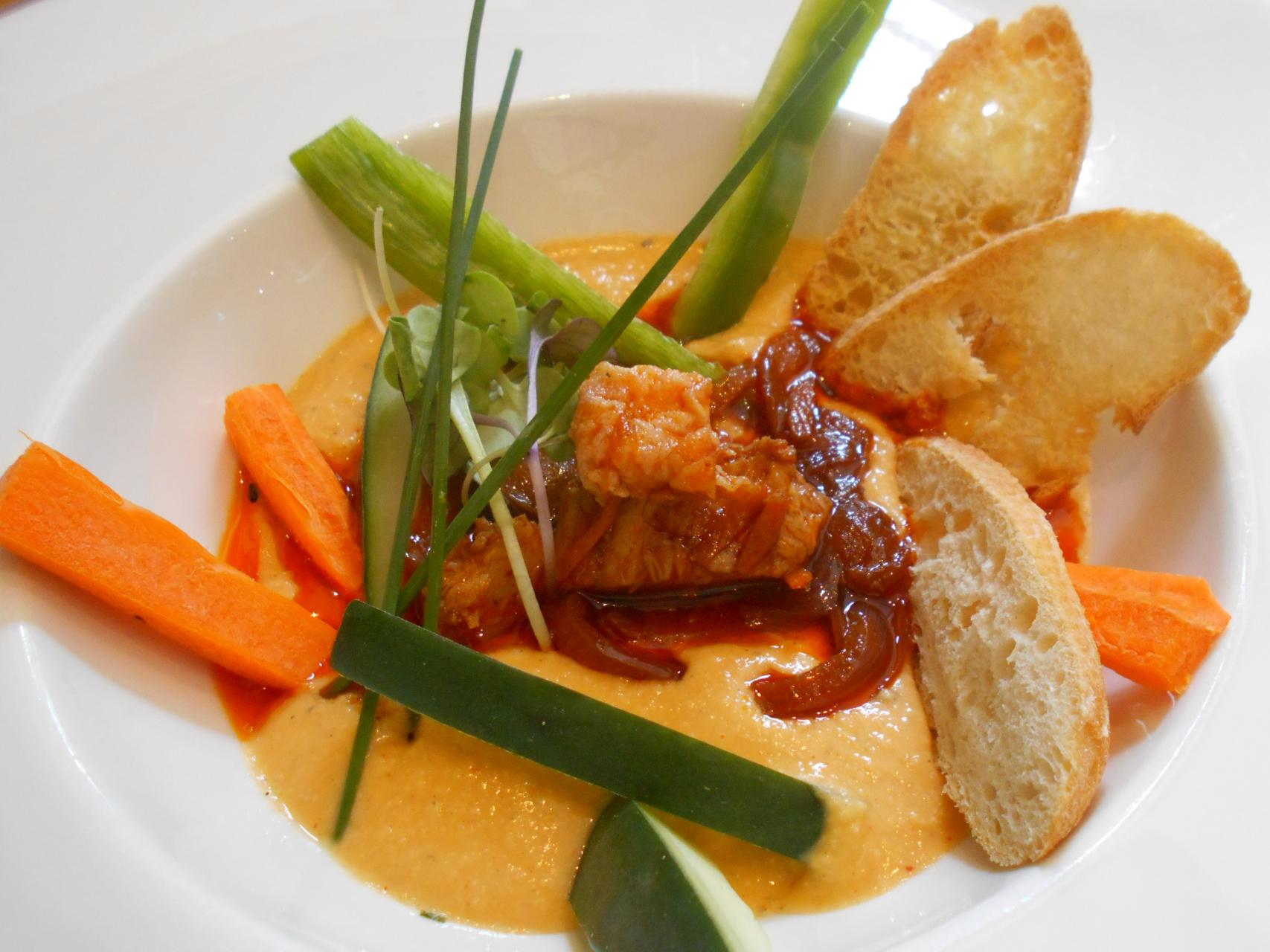 The hummus with escabeche was in the running for a 10 but missed out because the vegetable sticks were a bit passé. The millefeuille would have won a 10 if a few more egg yolks had been stirred into the custard filling.

Restaurant La Mémé, Avda Comte Sallent 14, Palma. Tel:971-902140. Check for opening hours. They have two interior dining rooms with lots of space, but even so it’s always best to reserve a table.

The La Mémé bill simply said “Two menús, €29.” That took in broken eggs with camaiot, hummus with escabeche fish, grilled salmon, pork spare ribs, banoffee and millefeuille, plus a very nice caña and a bottle of mineral water. Menús at €14.50 a head don’t come much better than that.