A colourful sea at risk: The decline of corals and gorgonians

There are various reasons for the decline of these species

When we think of corals we usually think of the tropics, imagining reefs in Australia or the Caribbean, but did you know that we have corals in the Balearic Islands? These colonial invertebrate animals, cousins of jellyfish, are present in our sea, filling our walls and rocky bottoms with colour. Unfortunately their presence has decreased drastically over recent decades, resulting in a serious loss of richness and biological diversity.

There are various reasons for the decline of these species, but warmer waters due to climate change, and overfishing - especially of red coral because of its commercial interest - are the most important. The film ‘Chasing Coral’ shows vividly how climate change and global warming are causing declines and pose a serious threat to the future of these species globally. The Mediterranean and Balearic waters are no exception.

Since 1999, mass mortality events of corals and gorgonians due to heat stress have been documented. The increased frequency of heatwaves, warmer summers and the general rise in water temperature due to climate change have made these events more and more frequent.

However, happily for now there are still places where we can enjoy seeing corals. In Balearic waters we can find more than a hundred species, among which we can find different species of gorgonians, red coral or Cladocora caespitosa. Some species can be seen from a depth of 5 metres, others live in cold waters at a depth of 800-1000 metres. 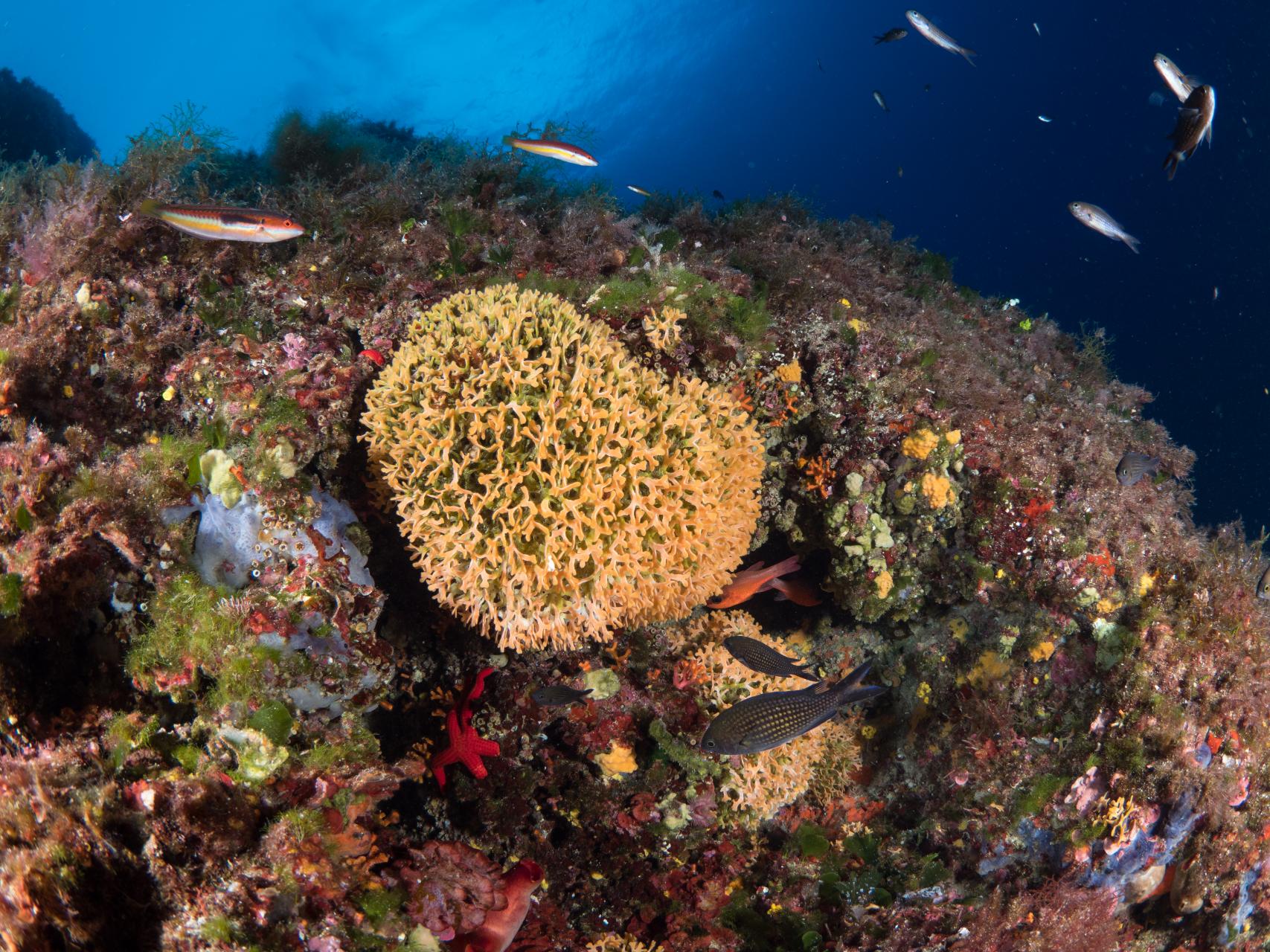 Both corals and gorgonians are invertebrate animals, more specifically they belong to the group of cnidarians, like jellyfish, and form colonies of several individuals, which can be male or female. Corals are rigid and form reefs, while gorgonians have a more flexible consistency and in some areas form underwater forests.

They grow slowly, and although there are significant differences between species, in general they look for areas with currents, where they find their main source of food: small larvae and microscopic animals. The food brought by the currents is captured by the polyps strategically distributed along the branches of these small “sea bushes” as if they were a net.

The same species can display different colours. For example, the red gorgonia in addition to red also appears in shades of lilac and even yellow. Because of high mortality due to the increasing temperatures, it is very important to keep track of the living individuals and report their status. Mortality can be identified because the skeleton of the coral is visible and turns white. In some cases, it may also be covered with filamentous algae. If you find corals and gorgonians underwater, take a photo of them and upload your observation to observadoresdelmar.es specifying their level of affectation. 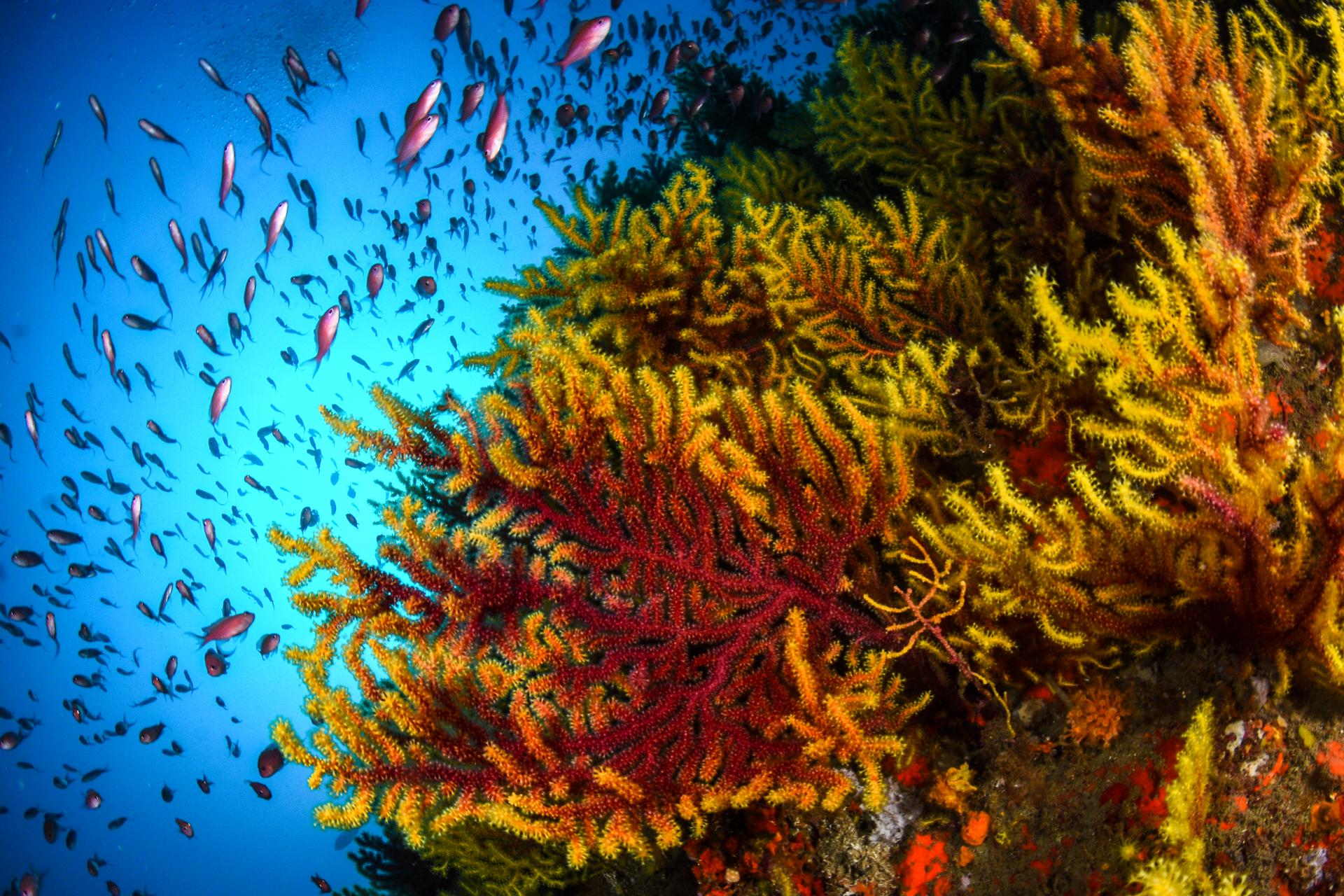 To will end on a positive note, despite the serious impact and the high mortality of corals we are experiencing, individuals and varieties have been detected that show a great capacity for resistance. Individuals that seemed to be dead have re-emerged - a process called rejuvenation - but for this they need time and improvements in their external conditions.

All this leaves hope that in the future we will be able to continue to enjoy these species, but this will only be possible with firm action to address and mitigate climate change.