British Sausage Week starts in a few days’ time — an important event in a country where they are the favourite meat dish — more than 900 million banger-based meals are eaten every year.

More than five million Britons eat sausages daily and an astonishing 87 per cent of households buy them — just as well today’s sausage machines can churn them out at a 10-miles stretch every hour.

For some years now, bangers are no longer a down market meal. Singer Madonna adores bangers ‘n’ mash, having acquired a taste for them when she was living in England and married to to film director Guy Ritchie.

Actress Kate Winslet served bangers at her wedding reception and Prince Harry asked celeb chef Jamie Oliver to create sausage-based meals for Army ration packs. “Bangers ‘n’ mash with gravy, in a bag, would be brilliant,” he said at the time.

Worldwide there are some 500 kinds of sausage. A butcher in Louth (Lincs) has the biggest variety in Britain — a choice of 83 kinds. 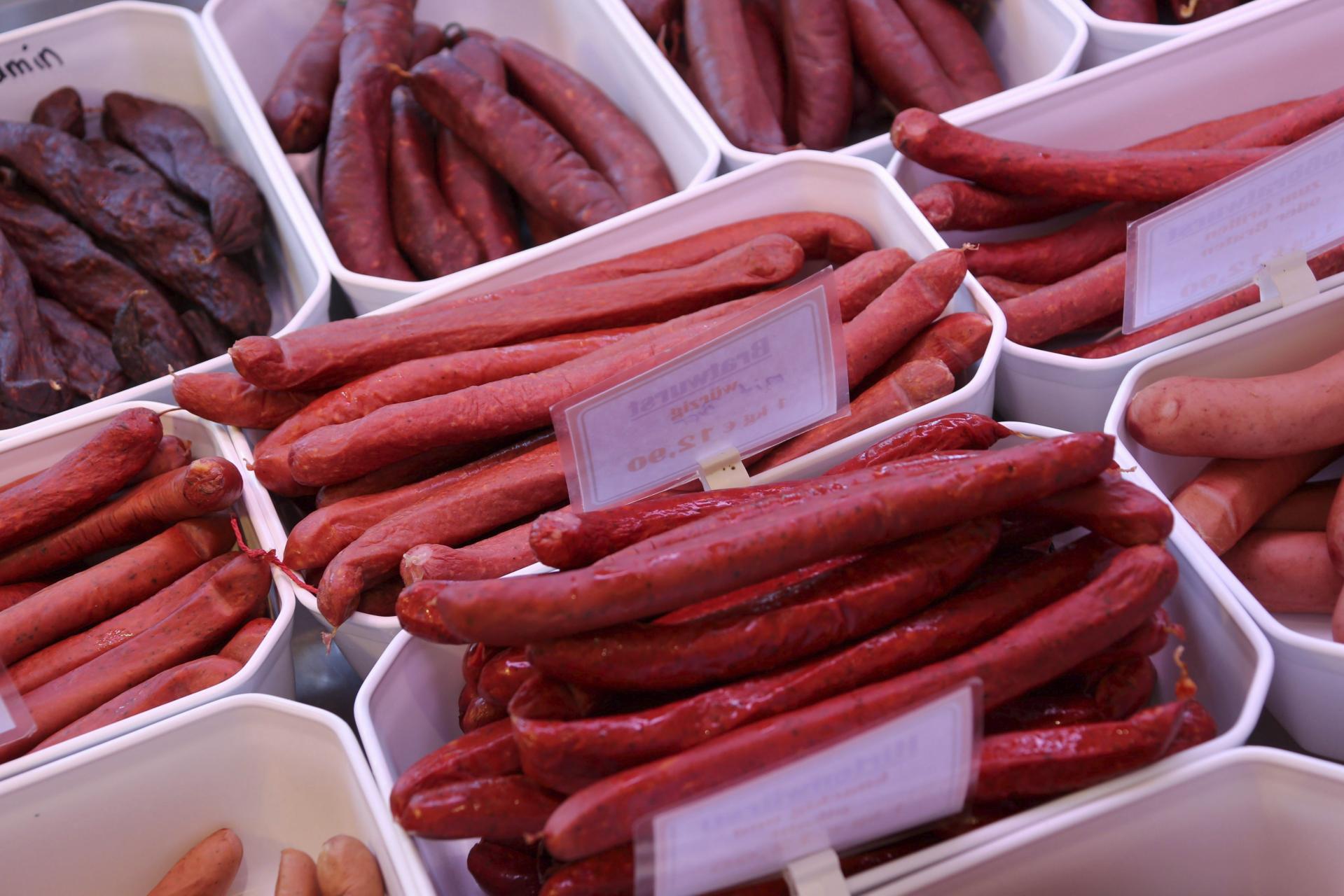 We’ve never had that range of sausages in Mallorca, but at the Mercat d’Olivar and Santa Catalina market and some of the bigger supermarkets, we can find French fresh and cured sausages, German wurst of various kinds, Moroccan mergüez, Catalán butifarra, Argentinian chorizos criollos and a good selection of fresh local sausages flavoured with herbs and spices.

Outlets such as Nice Price in Costa d’en Blanes also stock British sausages including Cumberland, and Dunn’s the butcher in Santa Ponsa make their own excellent sausages.

The largest choice of cured and fresh sausages I know of is at Carns Comas, the big corner stall on the left as you go through the main door at the Mercat d’Olivar.

Their thick sausages with herb fillings are especially good, as are their Argentinian-style fresh chorizos and their butifarra Catalana. They also do superior burger patties, easily the best I have ever had from a butcher.

The best fresh sausages I eat these days are from Carns Comas and at the supermarkets of El Corte Inglés in Jaime III and the Avenidas. These sausages are superb when grilled or fried whole, but quite by chance I have found that they are even better if roughly cut up before being fried. 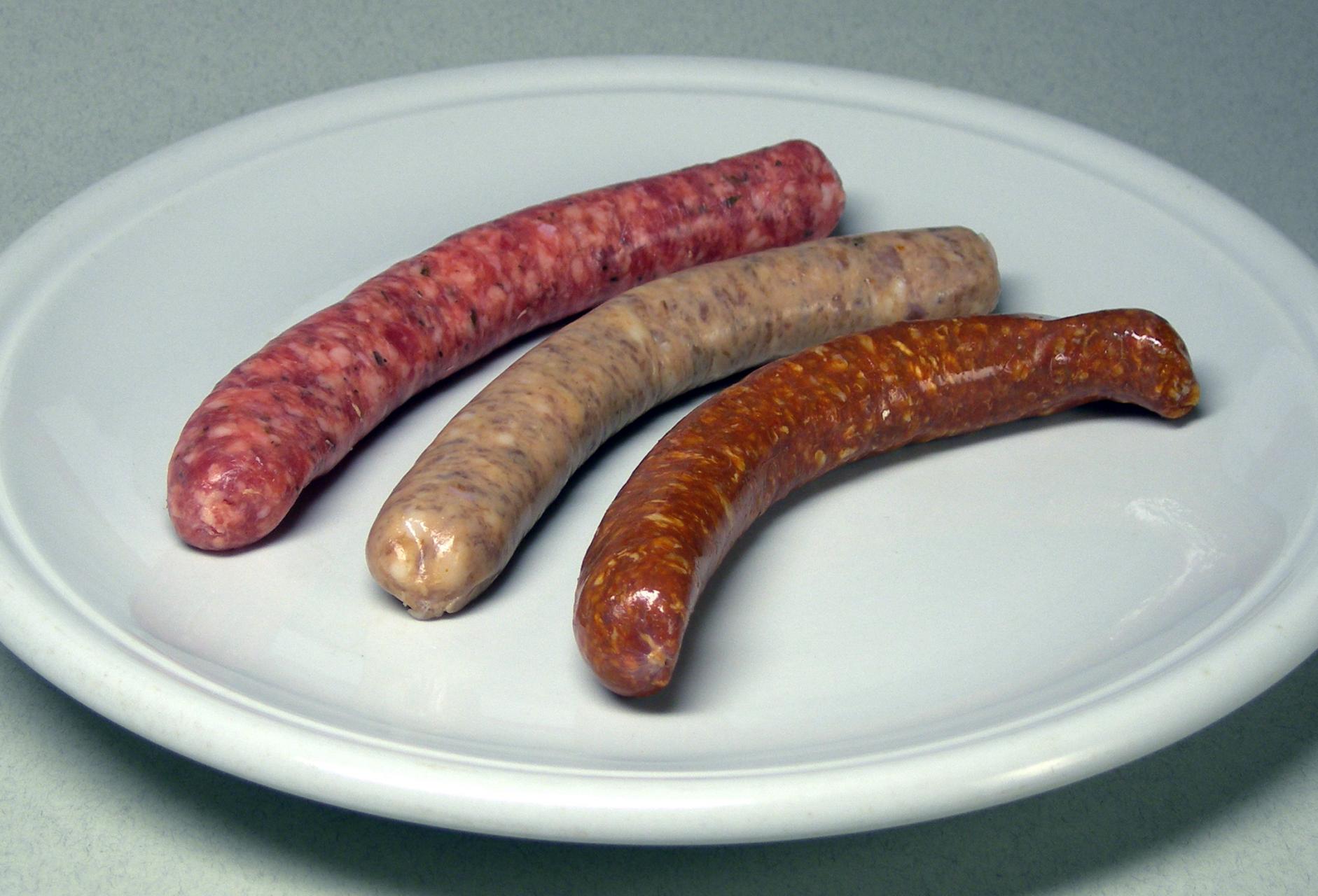 When they are fried whole, you have to keep turning them round to get them brown on all sides and the texture can be quite compact.

But if you slice them up into pieces of no more than 3 cms long, you can stir-fry them very easily. The texture then becomes light and fluffy and they even seem to taste better. This is such an exquisite way of doing sausages that I no longer fry them whole.

I lose the visual impact of the whole sausage on the plate, but the incredible texture and taste of the stir-fried sliced sausages more than make up for that.

The nickname bangers was coined during the Second World War. Sausages in those days exploded when fried because they had a high water content due to wartime shortages of meat and grains.

Housewives at that time used to prick sausages before frying or grilling them so the excess water would ooze out rather than escape with a bang.

The custom of pricking sausages has never completely died out and many cooks still ritually prick them all over before cooking them.

This is not only unnecessary but it’s a mistake because some of the flavour and the juices escape while they are frying.

There’s nothing new about sausages: the ancient Sumerians were the first to make them some 5,000 years ago in what is now Iraq. 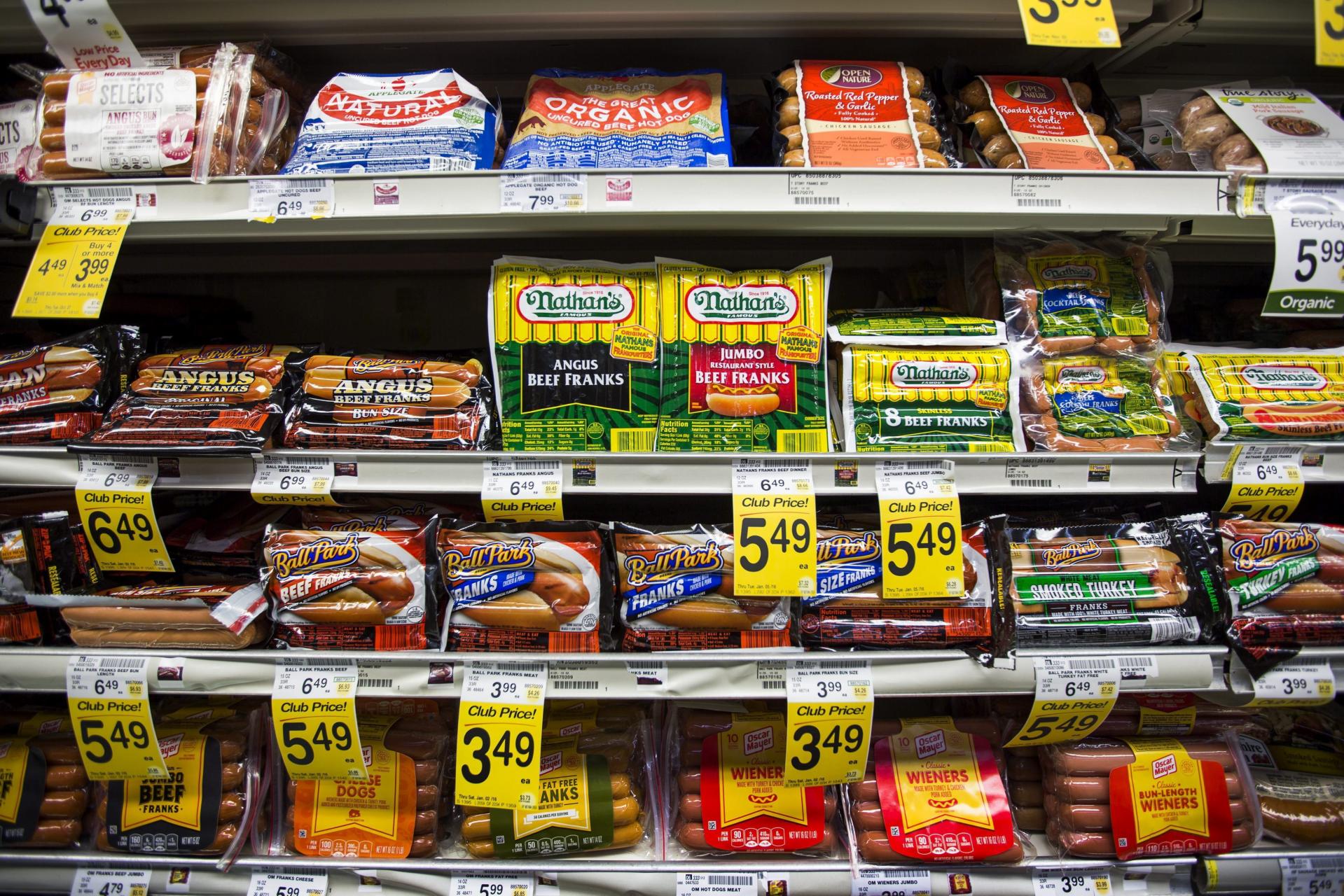 It is thought the Romans introduced them to England. Apicius, the Roman compiler of a book based on popular recipes of the Roman aristocracy, gave several for sausages.
One of his sausages was made with a mixture of spelt-grits and coarsely minced meat that had been pounded with pepper, pinenuts and liquamen, made with the entrails of fish and often used in place of salt. Sausage skins were stuffed with this mixture and boiled. They were grilled with salt and served with mustard.

Apicius wrote of a much spicier sausage made with peppercorns, cumin, savoury, rue, parsley, mixed herbs, and laurel berries, pounded together with liquamen and mixed into minced meat.

To this mixture was added extra liquamen, whole peppercorns plus a good amount of chopped fat. This filling was made into thin sausages that were smoked before being grilled.

The vast majority of those Britons eating some 900 million banger-based meals every year buy their sausages from the butcher. Only the keenest of amateur cooks have the equipment for making their own sausages. 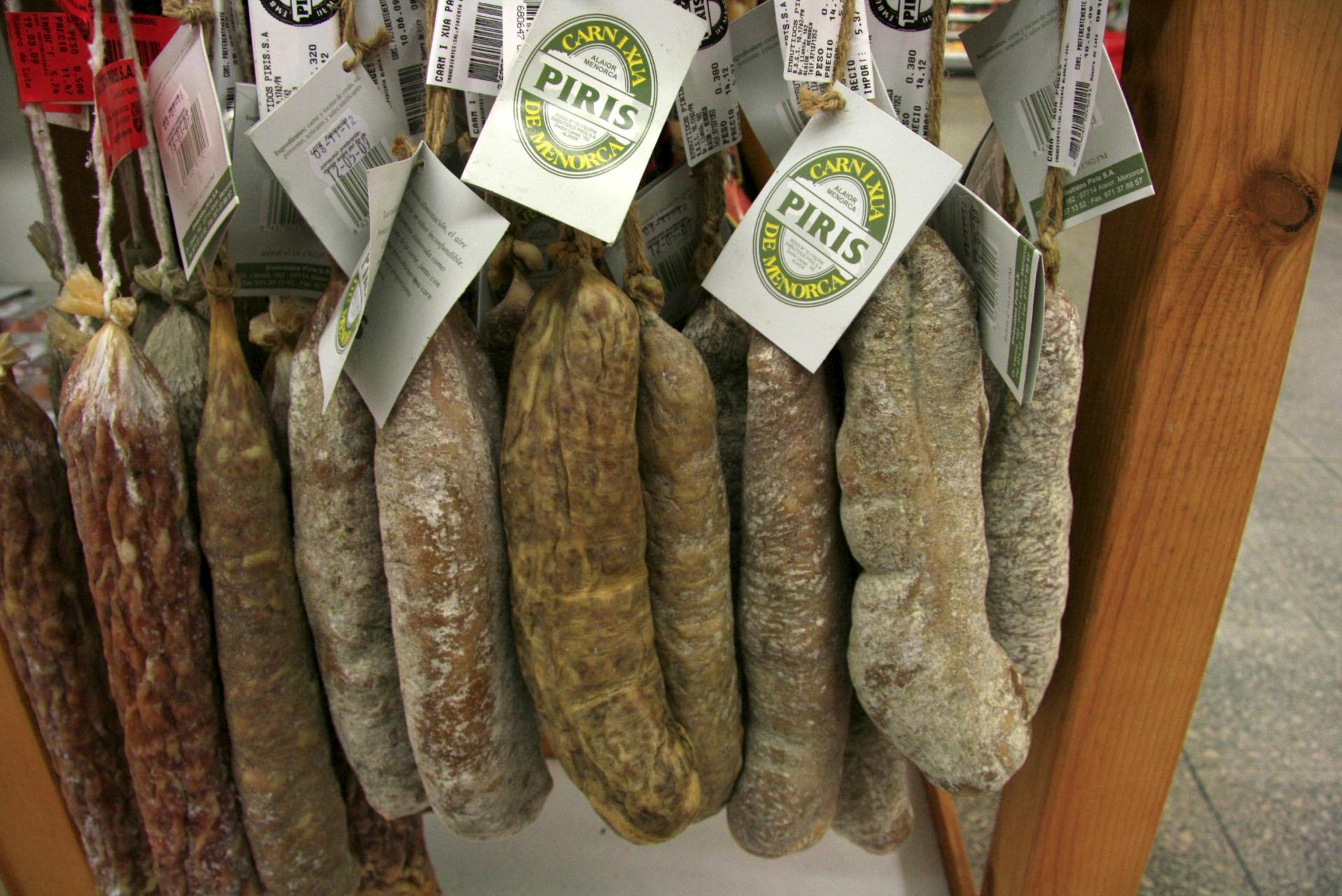 But anyone can turn out splendid sausages without a mincer and an attachment for filling the skins: there are dozens of recipes for sausages that don’t have skins.

Some people have a fear of even trying skinless sausages, but they are as easy as doing homemade burgers or meatballs.

There’s not much difference between homemade sausages and meatballs or burger patties: we are using the same kind of minced meat, similar amounts of bread and identical herbs and spices. The only difference is the shape.

Sausages and burgers need a good portion of fat to produce the necessary juiciness and taste. Most of us should be cutting down on our intake of animal fats, and when eating sausages the best way to do so is by having them less frequently.

Try having them once a week or twice a month. No one is going to live for a shorter time by having a couple of sausages every first and third Sunday of the month. We have no say in how much fat is in commercial sausages, but we can control it when we make our own. 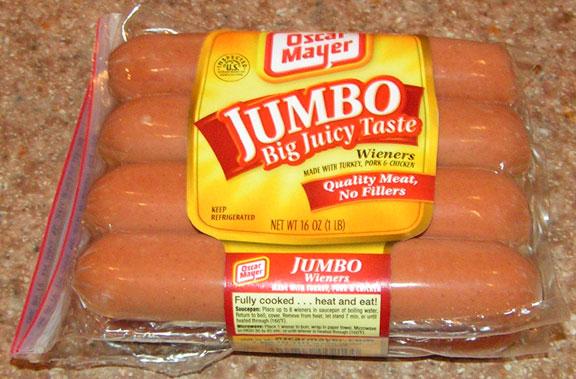 The sausages we buy usually have skins, but you can make perfectly good ones by shaping them with your hands and putting them straight into the frying pan.

Thoroughly mix all the ingredients, using a heavy fork or your hands, and leave the mixture in the fridge for at least an hour. Flour your hands and shape the meat into sausage sizes that are not too thick or too thin.

They can be fried or grilled until golden and crisp on the surface and moist inside. In Central Europe they are served with sautéed onions and red peppers but they are also delicious with mashed potatoes.

Soak the bread in the milk, squeeze out excess liquid and mix the bread into the meat with the onion and flavourings. Chill for an hour and form into sausage shapes.

Wrap a slice of bacon round each sausage, holding it in place with cocktail sticks. Place on a rack and bake in a pre-heated medium oven for 20-30 minutes.

With a heavy fork or your hands, mix together all the ingredients except the oil. Leave the mixture in the fridge for a couple of hours and then shape into sausages with floured hands. Heat the oil in a frying pan and sauté the sausages until cooked through. Serve with rice and a smooth sauce made with fresh tomatoes.

One of the best homemade skinless sausages comes from England — the famous Oxford sausages. Here is a version from a collection of 18th century household recipes and it is reproduced in its original form.

“Take one pound of pork, fat and lean, without skin or gristle, 1 pound of beef suet, chopped fine together; put in half a pound of grated bread, half the the peel of a lemon shred, a nutmeg grated, 6 sage leaves chopped fine, a teaspoonful of pepper, and two of salt, some thyme, savory, and marjoram, shredded fine. Mix well together and put it closed down in a pan until used. Roll out the size of common sausages, and fry them in fresh butter of a fine brown, or broil them over a clear fire, and send them to table hot.”

If you try this recipe, you may think, as I do, that one pound of suet is a lot. I would use a good deal less. But bear in mind that all sausages need fat for lubrication, which is why weight watchers should eat them in moderation.

In this recipe it is interesting to note how language changes. Most British people think ‘broil’ is an American term for ‘grill’, but it’s an old English word that we dropped in favour of grill — the Americans preferred to keep broil.

The term ‘put it closed down in a pan until used’ means keep it covered until needed. As the bread is grated it was probably rather hard, suggesting that this 18th century housewife was making good use of stale bread.

Put both meats through a mincer, twice if you prefer a smoother texture. Add the breadcrumbs, previously soaked in milk and squeezed dry. Mix well with a heavy fork, or use your hands.

Add the lemon rind, shredded suet, nutmeg, herbs and salt and pepper. Continue to mix until the ingredients are well blended. Leave the mixture I the fridge for a couple of hours to give the flavours time to develop.

When ready to make the sausages, flour your hands and form the mixture into sausages of medium thickness. Use them immediately or keep them on a floured plate in the fridge until needed.

Fry them in butter mixed with a little olive oil until the sausages are of a brownish colour with a slightly crusty surface. The butter-oil mixture should be hot, but not smoking.
Oxford sausages are delicious for breakfast with fried or scrambled eggs. They are also ideal for a light luncheon with sautéed potatoes wedges, buttered peas, or beans in a fresh tomato sauce.

Try them with creamy mashed potatoes or puréed root veggies such as turnips, celeriac, carrots or parsnips.

When making the sausage mixture you can experiment with the herbs, trying fresh basil, tarragon, dillweed, rosemary or even a little fresh mint (hierbabuena).