Some of the most succulent gourmet moments of my life during the past five decades were provided by oxtails — always ever so slowly cooked in vegetables and wine and served with nothing other than Mallorcan white country bread for soaking up the lovely silky sauce.

Oxtails are extremely tough and the only way of making them deliciously edible is by s-l-o-w, ever so s-l-o-w, cooking. Cooks in a rush to get their dishes on the table should stay away from oxtail. It needs lots of tender loving care…applied very slowly.

Oxtail is a gourmet’s delight in Spain, France, Italy and also in Britain. Many beef connoisseurs yearn for it more than most other cuts partly because there is so little of it: each animal has only one tail, enough for three servings at the most. 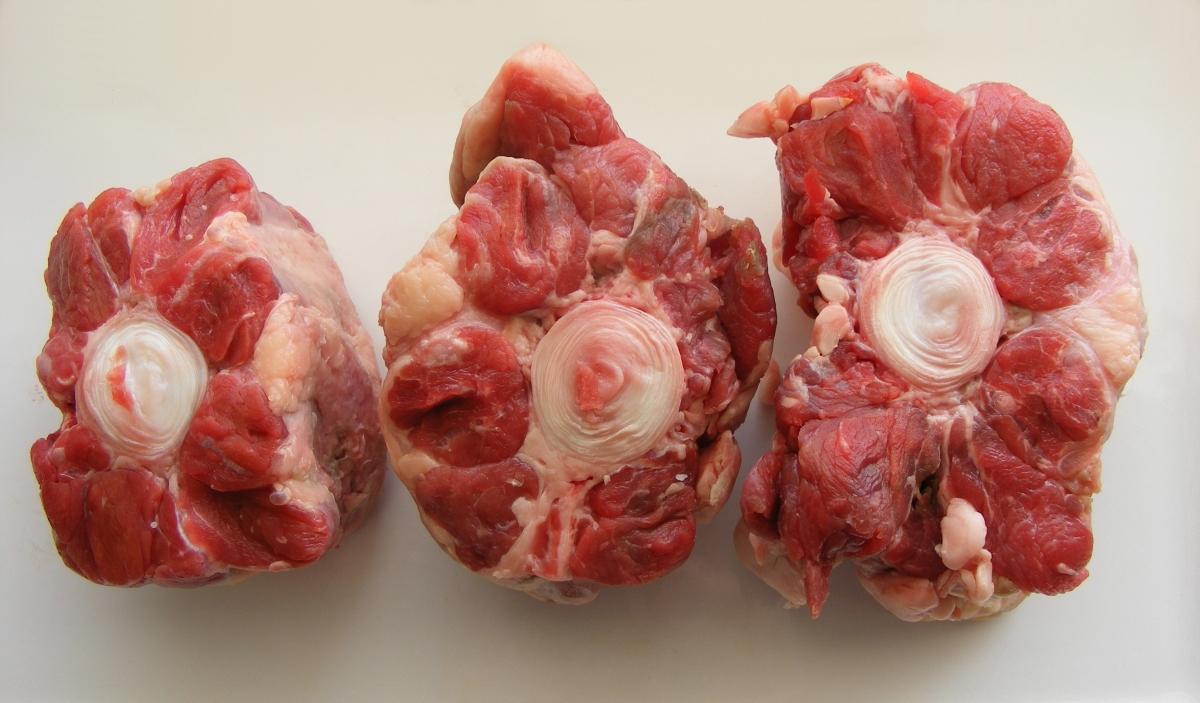 This means, as you would expect if you know how big business works, that much of what we see under the name of oxtail (rabo de buey, in Spanish) is from another animal.
You don’t have to be a butcher meat expert to realise what’s happening: you can tell just by looking at these tails. Some are so thin you’d think they could have come from a rather large dog. I’ve been told by people in the trade that many of them come from kangaroos.
That wouldn’t be a problem for me: I’ve never knowingly tasted kangaroo meat (there’s no reason why it shouldn’t be delicious) — I just don’t want someone telling a thin tail is from a small ox and charging me accordingly.

I’m a lover of oxtail from way back. I never ate it in Scotland, England or France, but I discovered it soon after arriving in Mallorca and I was enraptured right from the first taste of that butter-soft flesh.

Some years later I was a member of a small group that met once a week to drink interesting wines with rustic food. The meals were usually built around local recipes because this was a circle of Mallorcans and mainland Spaniards.

I was the only non-Spaniard, and Mallorcan and Spanish food was what we all knew best — although I slipped in French, Italian and British dishes from time to time.

We were especially fond of three ingredients: bacalao (salt cod), pigs’ trotters and oxtail. Bacalao was plentiful but expensive, pigs’ trotters were abundant and extremely cheap and oxtail was difficult to come by and medium-priced when we could find it. Nowadays oxtail is expensive, especially when you consider that there’s only a small portion of meat to a large amount of bone…but what marvellous meat.

That old saying about the ‘nearer the bone the sweeter the meat’ must have been coined after someone ate oxtail for the first time: when slowly cooked in wine-based sauce oxtail is one of the most seductive dishes.

In the old days (the 60s and 70s), the rich succulence of a stewed oxtail was such a come-on that gourmets, housewives and restaurant cooks quickly snapped up any that were available.

A Spanish woman friend and keen cook had a standing order for oxtail at her local butcher’s: she took every one that came her way and if she didn’t cook them immediately she froze them. 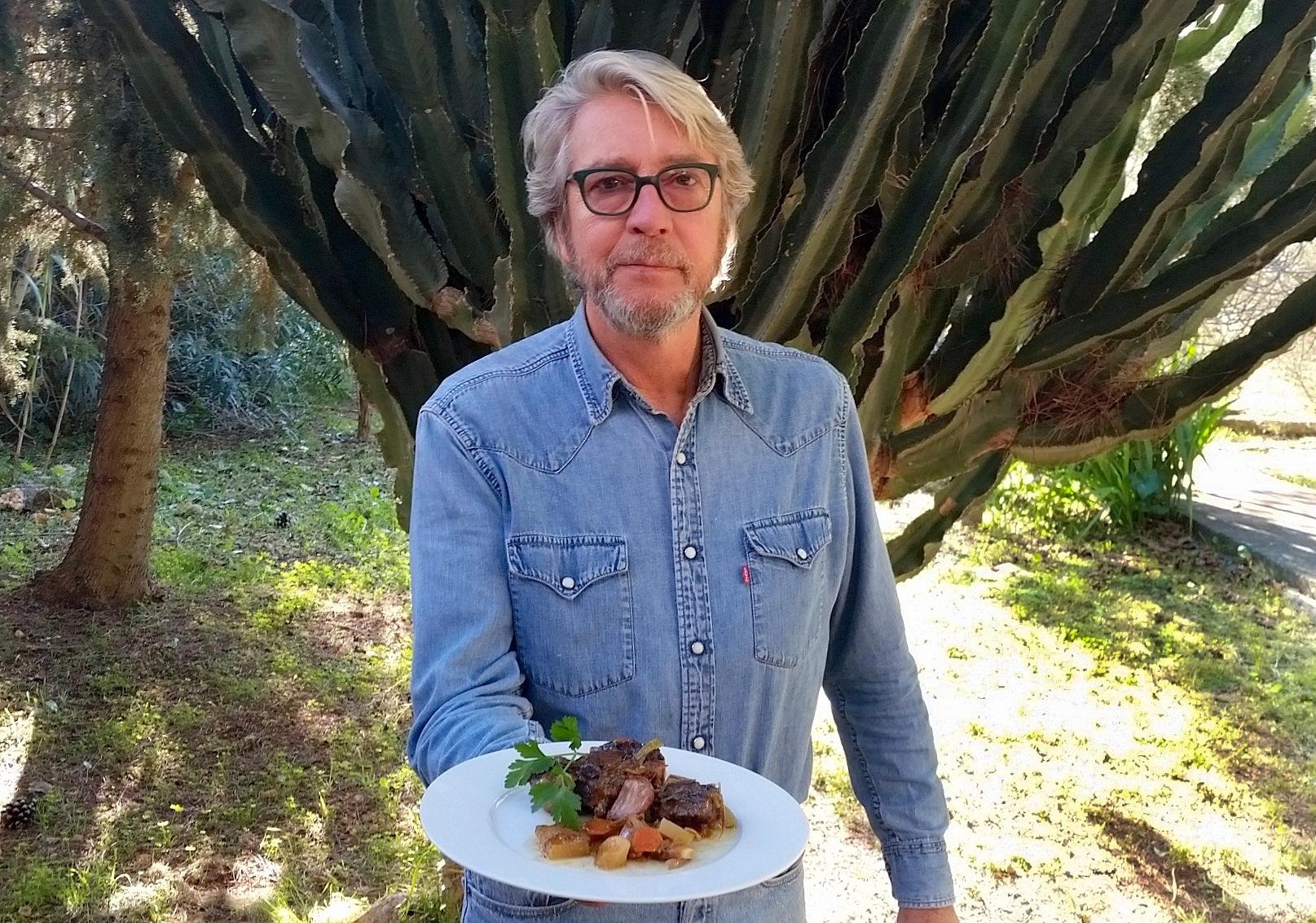 Genuine oxtails, from a fully grown bull, are almost unavailable nowadays. In the best scenario, what you get is a tail from an adult cow. There’s nothing wrong with that, but butchers and restaurant cooks never calls them ‘cowtail’

They always insist on the fantasy that they are ‘rabo de buey’ — real oxtail. They never are. And because no one ever refers to them as cowtails I, too, call them oxtails.

The oxtails at local markets are mainly from cows, a few are from young male animals (terneras) and some are from other animals such as kangaroos. The best oxtail I see is at the supermarkets of El Corte Inglés and that’s where I buy it.

It comes cut up in plastic wrapped packs and it always includes some of the thick pieces and some of the thin ones — which is what you get if you find a whole one at the Mercat d’Olivar or the Santa Catalina market.

Although oxtail is classified as offal, it is never as cheap as tripe or liver. It is nowadays rather expensive but still good value for such superb meat.

If you want to get the best out of what oxtail has to offer, the first rule you must learn is that it has to be cooked over the lowest possible heat until the meat loosens from the bone at the touch of a fork.

If an oxtail is cooked at the boil it will lose its collagen, nature’s glue that holds muscle tissue together, and the meat will become a mass of loose fibres.

But cook it at a mere simmer and its all-important consistency will remain intact and the texture will be incredibly luscious.

So if you’re one of those cooks who’s always in a hurry and taking shortcuts (I know so many who are like that) forget about doing oxtail. It’s a dish that cannot be rushed.

A saucepan with a tight-fitting lid (enamelled cast-iron is ideal) is called for, an abundance of patience is essential and a very low heat is imperative to get the best results from this succulent meat.

An oxtail stew is best made at least 24 hours before you intend eating it. And it will come to no harm (indeed, it will improve) if you keep it in the fridge for a couple of days.

The prolonged slow cooking, and the oxtail’s rest in its thick sauce, are essential for bringing out the gelatine in the bones. It’s the gelatine that helps to make this meat so memorable.

Oxtails contain a great deal of fat, as do the tails of most other animals, and by cooking them at least 24 hours in advance and allowing them to get cold, the fat solidifies and most of it can be scraped off.

The tails of an adult cow make for better eating because they are bigger and contain more meat.

All tails have at least one thing in common: they are thick at one end and thin at the other. The slim part is ideal for making stock — oxtail soup in an English classic — but real oxtail fanatics also eat it with relish, sucking out all the goodness from the small bones.

But when serving an oxtail stew, one has to be sure to distribute the thin and the thick bits as fairly as possible — which means everyone has to take the thin with the thick.

At big houses in Victorian England they did things differently: members of the family or guests were served according to their standing in that household: those at the bottom of the table received only thin bits.

Oxtail meat is a great absorber of flavour, so when stewing it we should pack in plenty of extra taste by using onions, leeks, garlic, carrots, turnips and red wine. Some cooks like to add a little high quality wine vinegar.

Transfer the pieces of oxtail to a suitable large heavy saucepan with a tight-fitting lid. An enamelled Le Creuset pan would be ideal but heavy-duty stainless steel would also do.
Add a little more oil to the frying pan and sauté the chopped onions, leeks, spring onions, the cloves of garlic, chopped carrots and turnips. 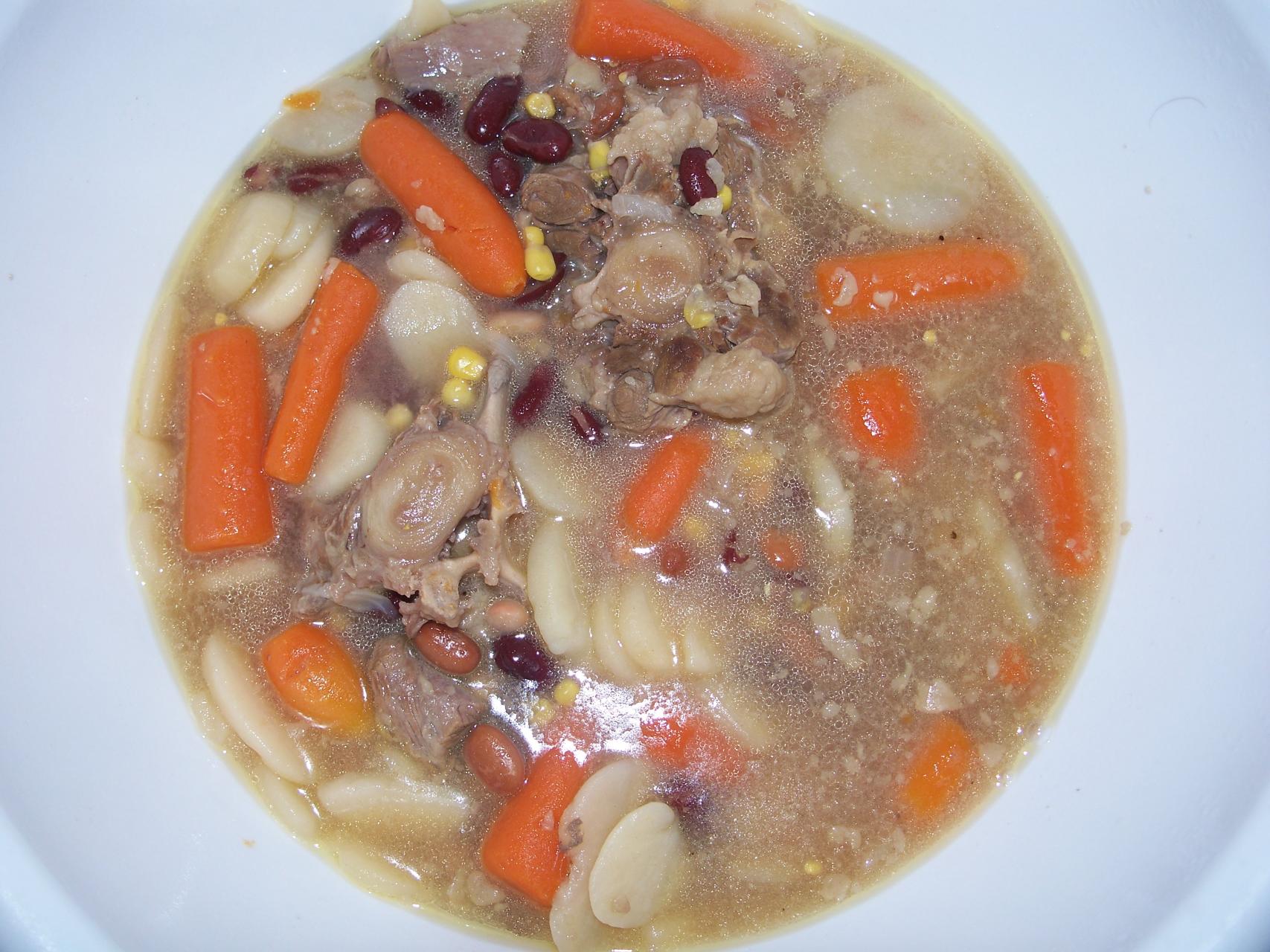 Pour red wine into the saucepan until it covers the oxtail, bring to the boil, cover, and simmer over a very low heat for two hours.

When the saucepan has cooled down to room temperature put it into the fridge for 24 hours. Scrape off the solidified fat on the surface.

Reheat slowly, transfer the pieces of oxtail to a suitable plate and blitz the contents of the saucepan in a blender until reduced to a smooth sauce. Return the oxtail to the saucepan and pour over the blitzed sauce, bring to the boil and simmer for another 30 minutes, or until the sauce is thick. If it is still on the thin side, do the last half hour with the lid off. Some cooks do this final stage in the oven.

Some aficionados eat their oxtail without any kind of garnish except some white soft bread to mop up the sauce on the plate. Some Spanish housewives serve it with small deep-fried potatoes (Mallorca’s patató) or creamy mashed potatoes.

And in some traditional Spanish recipes white beans or chickpeas are cooked with the oxtail.

Jamie Oliver, in his book on British food, does spinach dumplings in his oxtail recipe.
If you fancy some dumplings you could try this parsley version for which you’ll need: 400 grs sifted flour, 2 level tsps baking powder, salt to taste, 2 tbsps butter, 1 egg, 6 tablespoons finely chopped parsley and 100 mls milk.

Combine sifted flour, baking powder and salt in a mixing bowl and rub in the butter. Beat the egg with the milk and the parsley in another suitable bowl and add as much as is needed of the flour mixture to make a soft dough.

Wet a tablespoon and take out scoops of dumpling dough and place them on top of the oxtail simmering in its sauce.

Be sure to leave a little space between the dumplings so the steam can circulate. Cover the saucepan and let the dumplings steam for the final 30 minutes of cooking time.
You should drink the same wine as was used in cooking the oxtail, which means any of the crianzas from a well known winery that cost €6-€8.