We are living in a time when old traditions are either being rediscovered or left by the wayside. At this time of the year we used to have half a dozen Palma restaurants that served cocido madrileño — a hotchpotch of a hot pot ideal for cold weather eating.

At least two of the places that used to do a cocido have closed, but of the others I can find only one that still does it — Azabache has it as their dish of the day every Thursday.

There are cocidos in just about every main part of the country, including Mallorca where it is known as bollit — a dish that’s even more difficult to find than a cocido madrileño.

I wrote about cocido in February when Claudia Suarez Neuhaus, an Argentinian friend who had lived in Madrid since she was nine, did one at her home in Palma. Claudia’s aim was to do the cocido she grew up with. 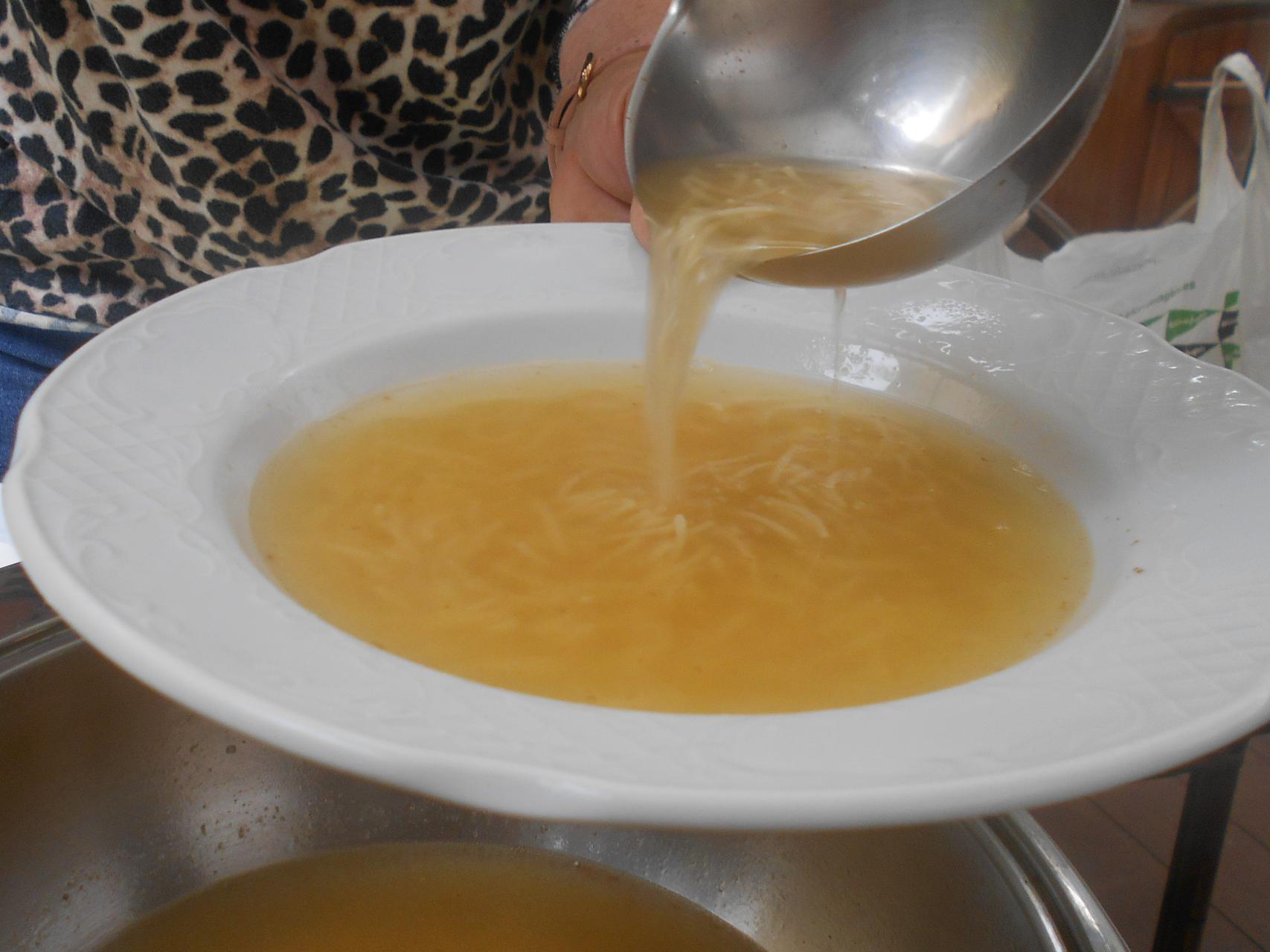 The Azabache cocido wasn’t on such a grand scale but it was a good restaurant dish-of-the-day version. It contained shin of beef, chicken, cured belly of pork, chorizo, a minced meat croquette, cabbage, carrots and potatoes.

With so many ingredients being done together in the same pot, the cooking of a cocido always produces and incredibly rich stock. That’s why a cocido meal always starts of with a delish soup with little pieces of angel’s hair pasta.

The Azabache soup comes in a tureen with more than enough for four plates of soup. It’s bursting with taste and very moreish, but don’t be tempted to do an Oliver Twist and have seconds — do as I do and have only half a serving. This soup is very filling and it can easily leave you without much of an appetite for the main cocido goodies. 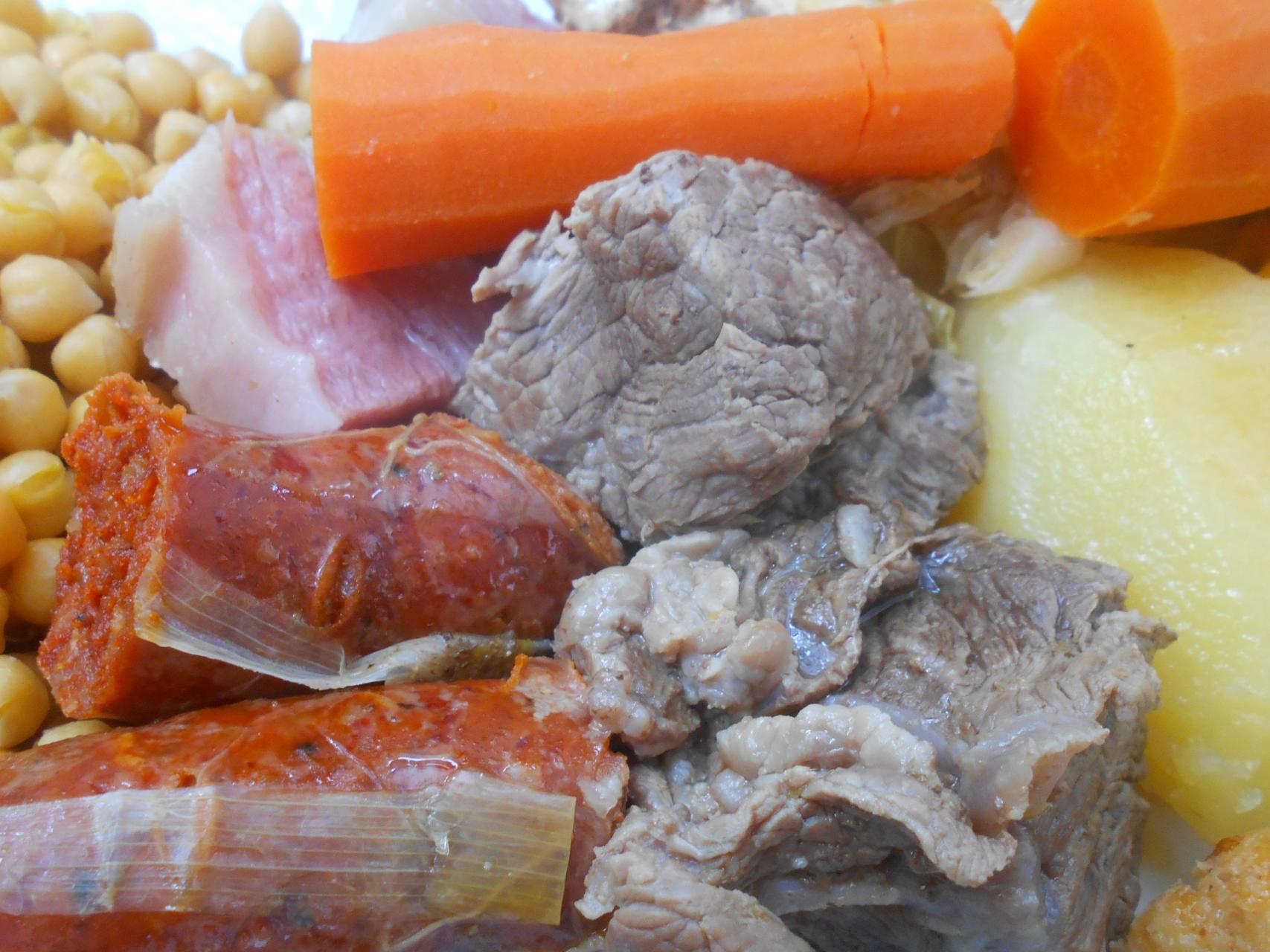 One of the problems with all cocidos, be they done in homes or restaurants, is that the meats get overcooked — the chicken is tasteless and falling apart and the shin of beef is reduced to a mass of insipid fibres.

This wasn’t the case, however, at Azabache — for the first time in many years the meats were à point and so were the veggies. The chunks of shin of beef cut beautifully, always a sure sign the meat wasn’t overdone.

Even the veggies survived prolong cooking: the carrots were nicely al dente, the potatoes were perfectly done and the cabbage wasn’t at all mushy.

But there were some small complaints.

The chicken breast meat was a bit dry (leg of chicken is always juicier, and cheaper) and the shin of beef (which cut so nicely) was a bit on the skimpy side. A croquette-like concoction, a substitute for the traditional pelota (meatball) didn’t work.

But on the whole this was the best restaurant cocido madrileño I’ve had in years and it is most recommendable.

A s always in Spanish recipes, there is no definitive list of ingredients for a cocido madrileño — it’s one of those dishes in which the cook makes do with what’s at hand in the way of meats, charcuterie, vegetables and seasonings. 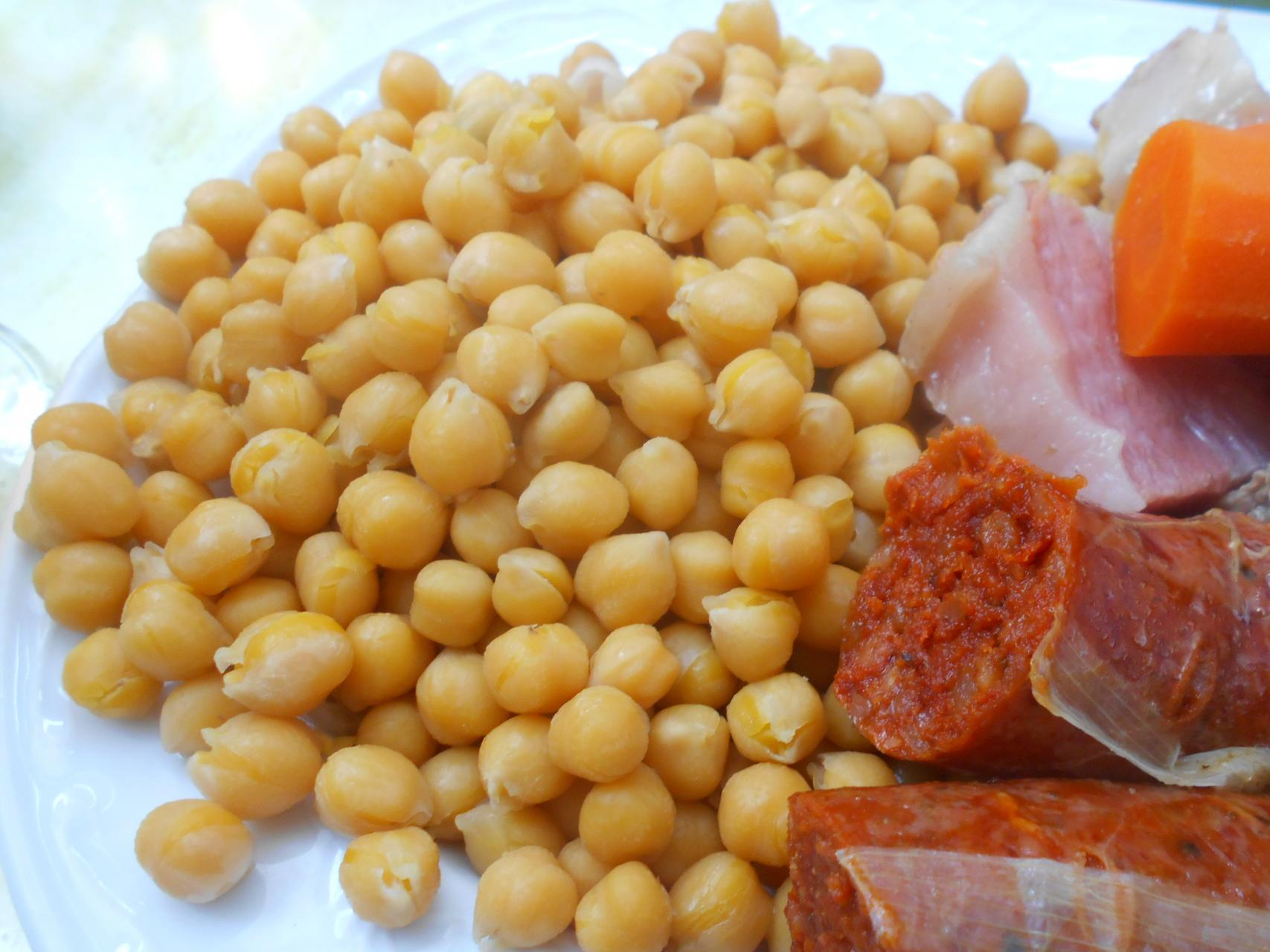 As the chickpeas are such an essential part of the presentation of a cocido madrileño at table, tradition demands that there must be a generous mound of them.

The chick peas are cooked with the other ingredients — but separately in a cheesecloth bag or one made of artificial fibres. When the cocido meats are ready, so are the chickpeas and they can be tipped out of their bag.

Chickpeas are such a sacrosanct part of a cocido madrileño that they come to the table in a serving dish of their own — that was what happened at the table next to us where a group of five old Spanish friends were eating.

The chickpeas were piled into an oval-shaped serving dish and by the end of the meal there wasn’t a single remaining chickpea, although there were leftover meats, charcuterie and veggies.

When the waiter came to clear the table before desserts were served, I heard one of the men say to him that he’d take home the leftovers.

Soon after that the waiter brought a paper bag and took out two plastic containers and showed them to the man. One contained the remainders of the veggie platter: carrots, a goodly amount of potatoes, and lots of cabbage.

In the other plastic box I saw chunks of meat, chicken, panceta, and some nice pieces of morcilla and chorizo. “Your wife will have to buy a jar of chickpeas,” the waiter said, laughing. 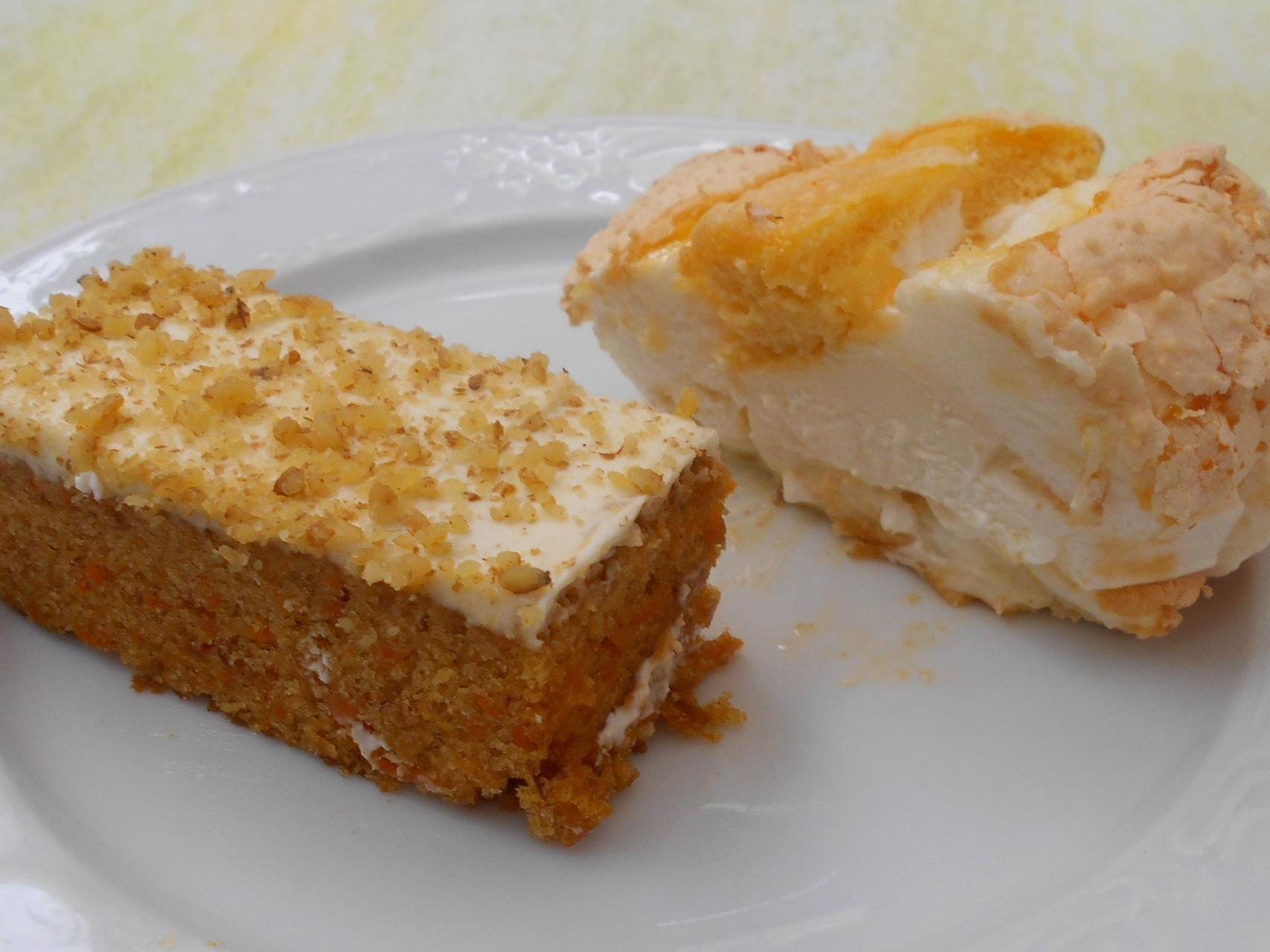 The wife would have two traditional options for using up the leftovers. She could cut up everything into bite-size pieces and sauté them over a high heat so that some of the ingredients were slightly charred at the edges. That dish is known as ropa vieja, or old clothes.

The other option is turning the finely chopped up leftovers into croquettes — that’s a much more difficult proposition than ropa vieja because the paste is rather soft and extremely difficult to handle. But it’s worth the effort because cocido croquettes are delicious in texture and taste. If you ever see them on a restaurant menu be sure to order a portion…or two.

Although there were three minor complaints about this cocido madrileño, it was on the whole a good restaurant version of this dish. And what I really liked about it was that for the first time in years the meats and veggies weren’t overcooked. The shin of beef was on the skimpy side but it cut beautifully because the cooking was so nicely timed. I have so many ‘unfond’ memories of pieces of shin so overcooked they were reduced to an inedible mass of tasteless fibres.

The carrots were perfectly al dente, the potatoes lovely and soft and the cabbage wasn’t at all mushy — a common fault in other cocidos. The carrot cake and the cream and meringue tart were two good examples of bought-in desserts. There was something else I liked very much. This restaurant does a nice range of tapas that are displayed on the bar. The choice includes croquettes — but they haven’t been fried. Anyone ordering croquettes gets them straight from the frying pan, which is the only way to eat them. I know of only one other bar that does that.

Restaurante-Café Azabache, Avda Argentina 49, Palma. Tel:971-222461. Closed on Sundays. They do a dish of the day from Monday to Friday and the cocido madrileño is the special dish on Thursdays. It costs €16.50. This restaurant can easily fill up on any day of the week, so it’s always best to make a reservation. Ask for a table on the indoor terrace (terraza interior).