Well, another year of wildlife watching is soon to be over. The shortest day is looming and for some wildlife, they won’t get to survive the winter. But this article is not about the gloomier side for our countryside, soon, the new year will be upon us and before we know it, spring will have sprung. Winter on Mallorca brings its own wellbeing moments, snow-capped peaks in the Tramuntana’s, the Almond blossom, the Friars Cowl growing around Lluc Monastery, and above all - the winter birds. We have already touched on the vibrant blue of the Kingfisher, some of the waders and ducks, and the magic of anything up to three million Starlings performing their spectacular ‘murmuration’ is already with us around the reed beds of the Albufera.

The small yet exciting birds such as Black Redstart and Chiffchaff abound, and the Christmas period brings one special little bird to mind, associated since Victorian times with Christmas, adjourning postcards and even being made into decorations for the tree - the European Robin - (Erithacus rubecula). Erithacus is a word from Ancient Greek referring to an unknown bird (probably the Robin). Rubecula comes from ‘ruber’ the Latin name for red. Rubescere is the Latin verb meaning ‘to blush’. An unmistakable bird, the Robin is an active feeder, always on the move. 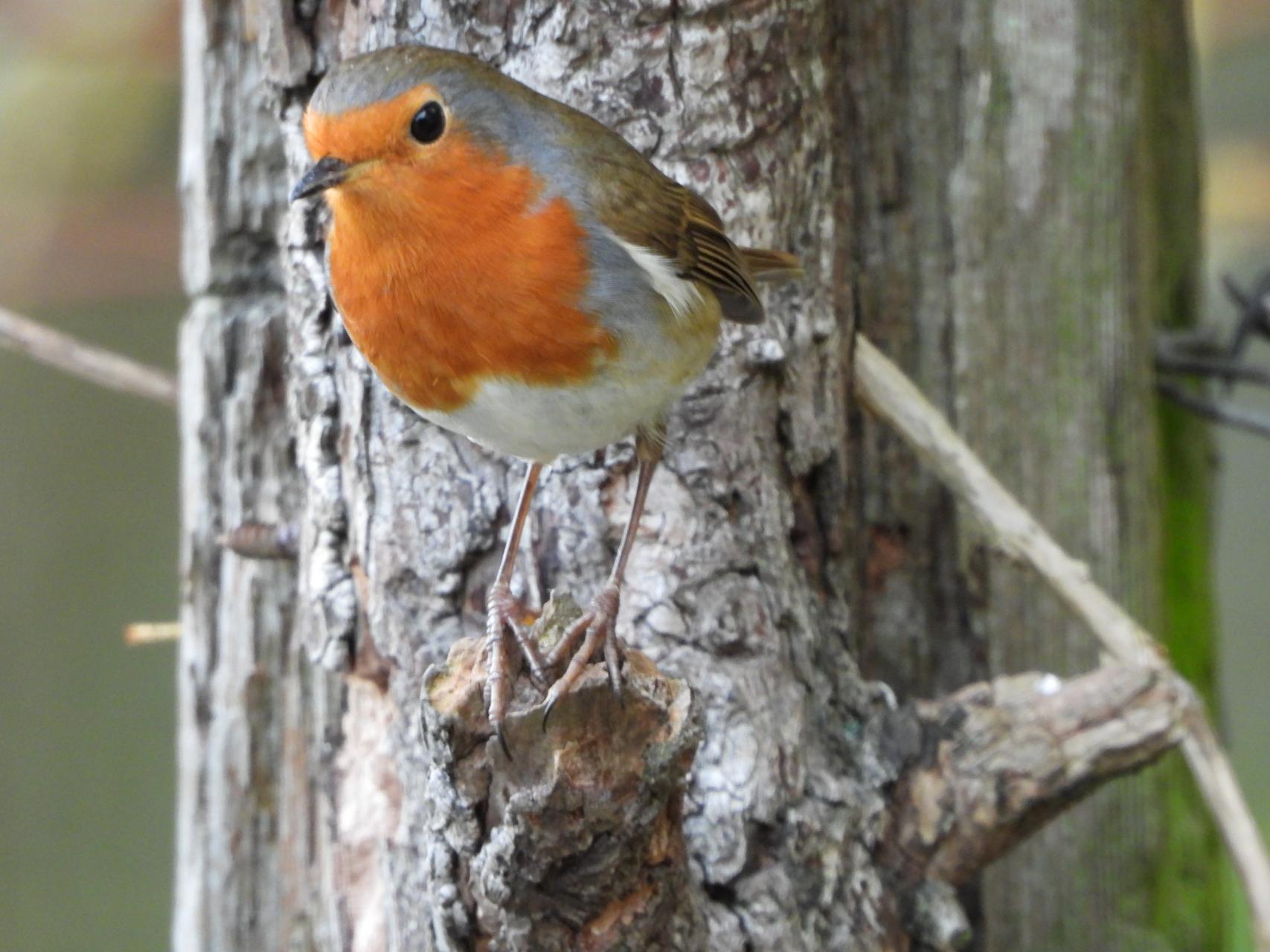 They are a small insectivorous passerine bird that belongs to the chat subfamily of the Old-World flycatcher family. The distinctive orange breast of both sexes gives them the common name of redbreast. But orange as a colour was unknown in the English language until the 16th century, by which time the fruit had been introduced. Although diurnal (active by day) they have been reported to be active hunting insects on moonlit nights or near artificial lights at night, and are even well known to gardeners, tempted by the soil being disturbed where they can seek out insects, especially Earthworms. Although they are a winter visitor here, they will be quick to take advantage of gardens and vegetable patches all across the island. They are however, noted for their aggressive behaviour, especially the territorial males, fiercely attacking other Robins and have even been seen attacking their own reflections.

The Robin plays a big part in folklore too, and in Norse mythology, it was held to be a storm cloud bird and therefore sacred to Thor – the God of thunder. Legend has it, that when Jesus was dying on the cross, a Robin which was then a brown coloured bird, flew to his side, and sang into his ear to offer comfort during his pain. The blood from the wounds seeped onto the Robin and stained its breast, and since then, all Robins now carry the mark of Christ’s blood upon them. Other legends abound, with another saying that the breast was scorched whilst fetching water for souls in Purgatory. But it seems that the Robin’s association with Christmas merely stems from the fact that postmen during Victorian Britain wore red jackets and they gained the nickname ‘Robins’, and soon after became a popular theme on Christmas cards depicting a postman delivering the card. Whether legend has anything to do with it or not, I really do like seeing the Robin, and it doesn’t matter how many I see in a single day, each one is eye catching and full of character. 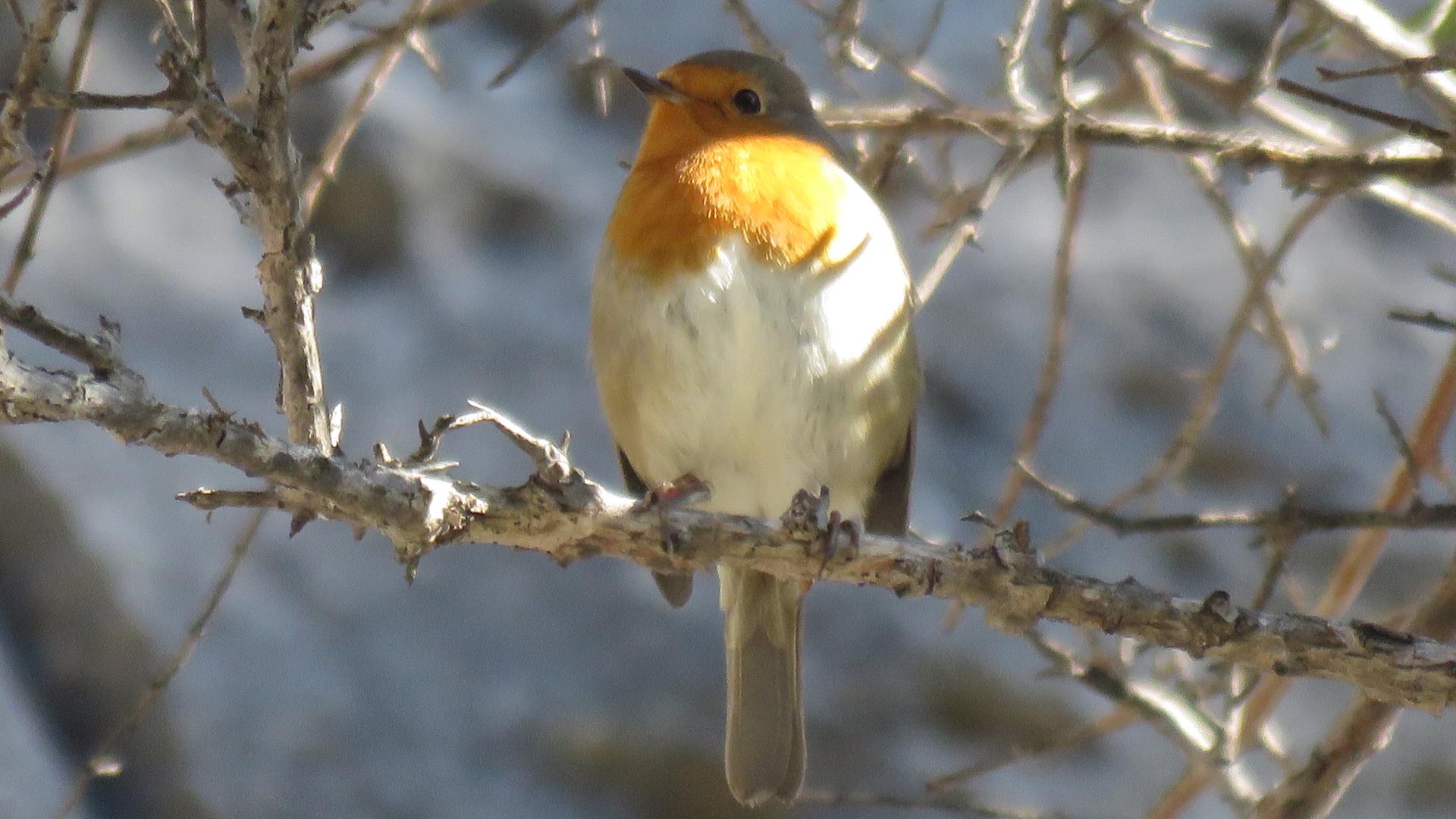 They chose shady habitats generally, usually with moist ground where they can easily forage. The call is a sharp ‘tic’ and even in winter, males will sing a series of mellow, whistled warbles. They are a small, round bird, weighing 13 – 23g with a wingspan of 20 – 22cm and a length of 14cm. Sexes are similar, and adults have olive-brown upperparts with a grey-brown rump and warmer brown upper tail coverts and tail. They often show a short, narrow wing bar formed by buff tips to the greater coverts. The forehead is an orange-red which surrounds the eye (and extends slightly further above the eyes in the male). The fore-cheeks, chin, throat and breast are also orange-red. The brown upperparts are separated from the orange face and chest by a band of soft blue-grey. The flanks are a warm buff and the belly and under tail coverts white. The bill is dark brown and the legs a softer brown.

Although Earthworms form a lot of their diet, they also relish Beetles and other invertebrates, and in the winter, they will certainly take advantage of fruits and seeds. Whilst visiting a zoo in Devon on one occasion (Dartmoor Zoological Park), whilst at the Tiger enclosure, a Robin was coming down to peck at insects along the edge of the water area. To my amazement, this particular bird then caught a tiny fish, possibly a Minnow, and hopped up onto a branch to swallow it whole. I never associated Robins with eating tiny fish, but it just shows how resourceful they can be.

You will be reading this article no doubt during the Christmas week, so from me, I would like to personally thank those of you who have emailed me with queries and kind comments, and to the staff at the Majorca Daily Bulletin for their support, and especially to Ashlee Caliz who sets out my articles and pictures beautifully making them so appealing to the reader. I try to put in a selection of flora and fauna in my articles and I hope you will continue to support the Bulletin and myself in the new year. So from me for now – Feliz Navidad.