Well as weeks go this has been a memorable one. The great storm (as it may well become known) hit the valley of Soller very hard last Wednesday and our home didn’t escape its ire. I remember waking in the night blinded by flashes of lightning and hearing what I thought were tennis balls being flung against the bedroom windows but it was huge chunks of hail. At any moment I thought one might land on the bed.

On retrospect I maybe should have clambered out of the warmth of my duvet and checked on the state of play in the basemen office but inertia set in. That was a big mistake. When we did awaken in the cold light of day, rain was still lashing down and our orchard had become a veritable lake. My immediate worry was for our domestic cats but they were curled up on the bed or on armchairs. The poor strays which I feed were nowhere to be seen and I feared for my peahens, ducks and hens. The Scotsman patiently reminded me that ducks liked water and hens had wings. All the same, I fretted as I clambered down the dark stairs (the electricity was off) and pottered into the office. My first unpleasant surprise was finding my bare feet submerged in dark dank water that had swilled beneath the outside door. The drain outside had become encrusted with leaves and debris from the storm so the water had no escape. Instead it sought refuge in my writing room and upstairs in the kitchen. 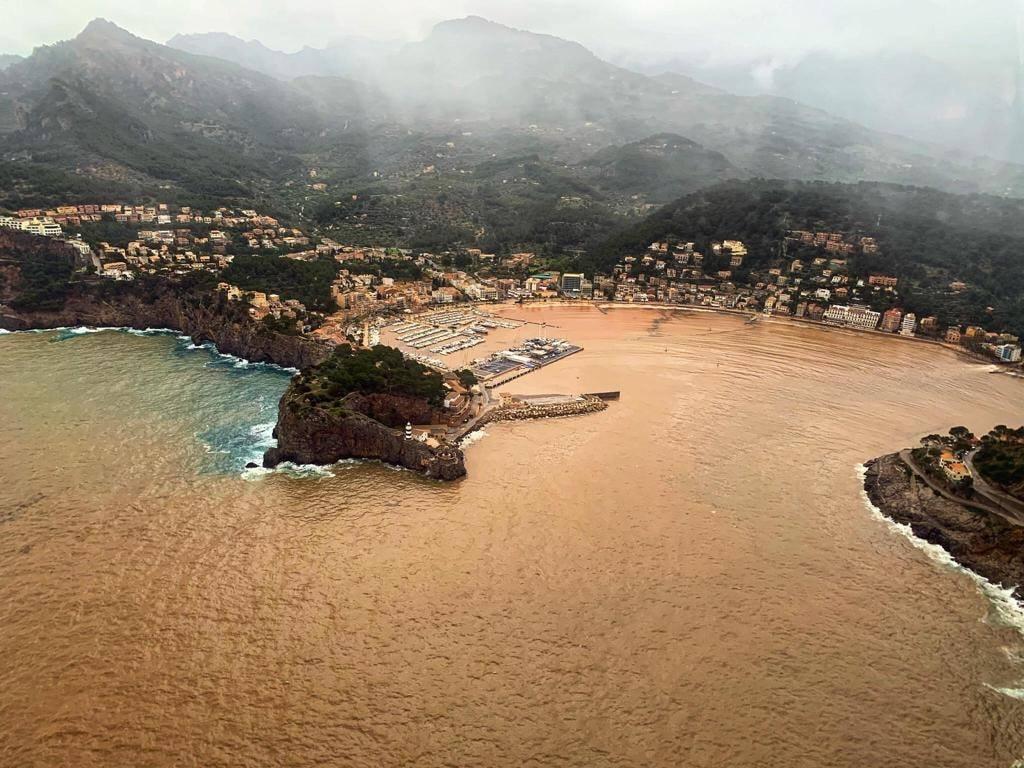 In the darkness I managed to find warm clothes, a hooded jacket and my wellies and set off to check on the livestock. All the birds – hens, peahens and doves -were sitting soggily on branches above our new lake while the corral had become a deep swimming pool for the ducks that were surreally gliding round where once there had been dry land. On a thin ledge above murky water, our resident stray kittens were crying pitifully having tried to clamber into our outhouse window, only to find the room four feet deep in water. Their mother had found drier ground above and was distraught to see the plight of her young.
Without a boat I sought a solution in two dustbins that I used as giant boots, aided by a pole, to wade across to the kittens. Meanwhile the rain hissed down so it was hard to see or get purchase and I was certain I’d tip over at any moment. After a tense domestic drama of a watery kind, the kittens were safe, I was very scratched, the Scotsman soaked, but all was well.

It has taken several days to clear the land, power hose the mud and silt from the outhouse, mop up the floors, take ruined belongings to the tip but normality has almost returned. The most important thing for us was the return of electricity and to know that the sockets worked despite some having been under water. I may behind with work deadlines now but things could have been so much worse, and when I hear of the horrors that befell others, I thank my lucky stars that we had it relatively light in comparison.

The last great storm of this magnitude, struck us back in 2001 and it was far worse then. We had a dinghy for crossing our land, the track was impassable for the car and we had no electricity for three days. We sought mercy from locals who offered us use of bathrooms and showers and we had rudimentary meals at local restaurants or from neighbours as we couldn’t cook and had no running water. Our son couldn’t go to school – what a happy chap he was – and our computer and phones were blown.

So, this time it was a pain, disruptive and involved a bit of muscle to put right, but it was nothing compared to 18 years ago. There are always reasons to be grateful and dare I say, even cheerful in bad times.

Thousands flocked to greet green campaigner Greta Thunberg in Spain where she made an address at the Complutense University of Madrid. Amid the clamour, critics complained about her sour and angry demeanour and how she scowled to camera like an omen child. I feel for Greta. She is a tireless one-child-woman crusader despite the massive adoring movement trailing in her wake and the opportunistic adults trying to grasp her coat tails. All I saw in Madrid was a pale, vulnerable and exhausted 16-year-old girl speaking all over the world with apparently no let up and no opportunity just to live and be, as any teenager should. She fervently believes in her message and was evidently hugely disappointed to have to report that all the school strikes and public awareness this year have failed to alter greenhouse gas emissions which are forecast to rise in 2020.

So, yes, she looked miserable because she is frustrated and feels that her mission is far from accomplished. We forget that this slip of a girl is flesh and blood like us and also needs sleep, fun and a normal childhood. So let’s hope that her family ensures that she has free time soon and a chance to rest and recover. Whatever anyone thinks about her cause, they cannot deny that she is a fiercely intelligent young woman with a profound desire to make this planet a better and safer place to live. In fact, all young Greta wants for Christmas is that our planet will still exist for her own and future generations.

Don’t miss the glorious Hotel Gloria Sant Jaume Christmas market in Carrer Sant Jaume in Palma tomorrow from 12-8pm. I shall be popping along to sign books and check out the stalls from 6-8pm. Hope to see you all there!

Adam Ostenfeld | over 3 years ago

Well have say it's interesting to see how much interest there is in Greata´s screaming and ranting in Mallorca and also seen by some of the English Press , after looking at the Election result and looking at the results , Basically there are No Green Party Voters in Great Britain less than 1 % and recycling in England basically docent exist , so why is everyone so excited about something the English have no time for and no interest , Boris didn't even go to the tv debate about the environment so here we are , and Mallorca about garbage well that is something we could talk about for a while , happy holidays .