A few Easters ago, I woke up one morning thinking I was Mary Berry. It wasn’t a medical condition that required psychiatric counselling. It was all down to The Great British Bake Off, where Mary convinced me that I could handle her baps! Well they were hot cross buns actually, and Mary, the cheeky little minx, made it look so easy, I immediately rushed out to buy some easy bake yeast.

I had tried making hot cross buns before, but they never came out like Marks and Spencers', so I used them as beer mats instead. Mary said the secret to success was all in her ‘double proving’ method and I was excited to try it in real time. I liked the idea of ‘dried’ easy baked yeast in packets, as ‘live’ yeast has always scared me a bit and seems so, well . . . scientific! Getting something which appears relatively dead to become alive, in order to raise a quantity of inactive matter sounds far too much like a Frankenstein experiment! Besides, I remember such experimenting once in my youth, and made an impromptu pizza base that was supposed to be a Viennese Cob Twist.

Mary Berry’s ‘double proving’ recipe did make exceedingly excellent Easter buns, but to be truthful, took most of the day to get into the oven. “They’re still not like Marks and Spencers’ though,” said Other Half, and once that benchmark has been set, it’s difficult to move on! Needless to say I never repeated the recipe and the easy bake yeast went back in the easy bake drawer!

Shortly after that I bought a pasta making machine. I have always been impressed by celebrity chefs and their ability to knock anything up, including a bit of Italian pasta dough at the drop of a gondolier! Just like Mary, they always make it look so easy, and with lots of practice I’m sure it does becomes that simple, if you can source the ‘00’ grade flour and calculate the perfect combination of egg yolks against the water/oil conspiracy. My pasta dough was actually pretty cool, but only experience and a well practised eye can give you the most perfect of results.

I had a penchant for making dazzling stuffed raviolis ‘a la Masterchef’, but started and stopped my home made pasta journey with lasagna. Like most people I know who have bought pasta machines, they only ever come out of the box once! And although I seriously intend to take advantage of all this time spent ‘indoors’ to master the machine and perfect my fresh pasta, I really wish I’d bought a bread maker instead, as what I really miss in these days of lockdown is freshly baked bread. We have a bakery in the village, but I’m not venturing out at the mo, and avoiding anything that is handled in production and not seal-wrapped.

So, with bread in mind I had another Mary Berry moment and dug out the easy bake yeast. Only this time it was Delia calling with her ‘simple white loaf’! With all respect for Delia, my loaf came out like a brick, which I am going to use as a base for a table lamp. I think the recipe I followed also had a typo error which said knead dough for 1 minute when it probably should have been 10. Somewhere along the line the nought must have fallen off the page! I also discovered that my easy bake yeast had fallen well past its sell by date by two years, so it was a culinary disaster all round.

What disappointed me most was that I had wasted a good amount of flour when I am trying to be careful with my lockdown larder. But I still had bread in mind so went with a traditional yeast free Irish soda bread, using white flour only and adding a cup of oats to the mix. It turned out really well and was yummy with a hearty vegetable and bean soup. It even toasted well, which was a bonus, and although I was informed later that the soda had stripped the enamel off Other Half’s teeth! (or at least it apparently felt like it did) the bake was a success. Next time, I’ll only use a level and not heaped teaspoon of bicarbonate soda. 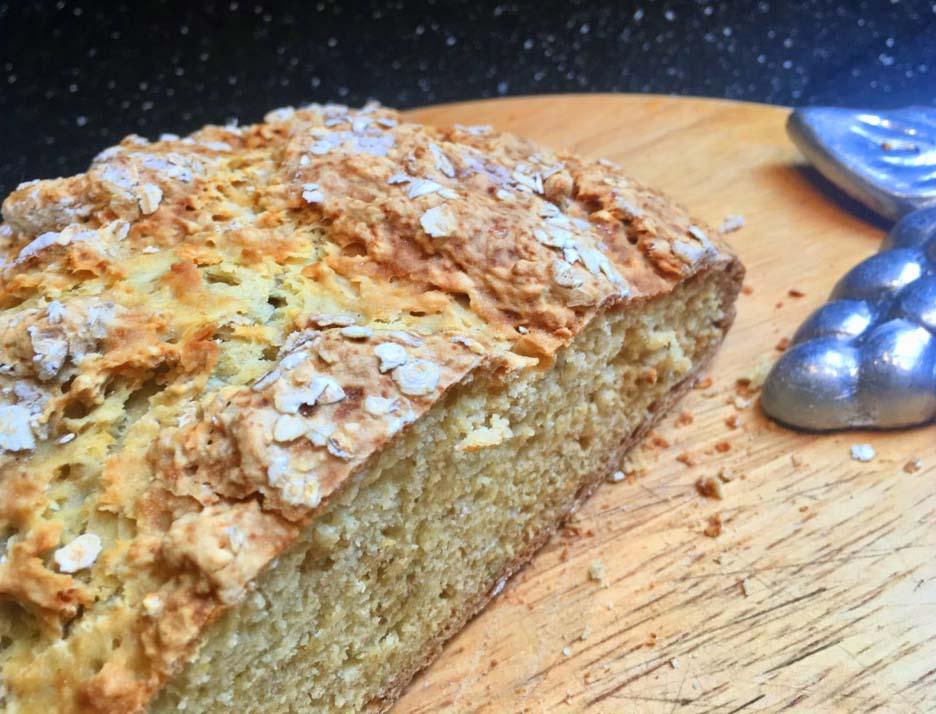 I’ve given up on bread for the moment until I can get my hands on some more yeast, and am going back to my pasta machine. Watch this space! But meanwhile, as I’m in the mood to bake and share, here is a recipe for a really economical steamed pudding that I’ve been doing for years, which is not technically baking, but 100% foolproof.

Most steamed puddings need suet and use lots of sugar. This one doesn’t, and hopefully you will have all the ingredients to hand without having to rush to the shops. In these rather grey times nothing delights more than a sweet treat. And we could all do with a bit of cheering up, served with lashings of custard. This recipe uses golden syrup but if you don’t have any you can easily adapt and use runny honey, or even jam. 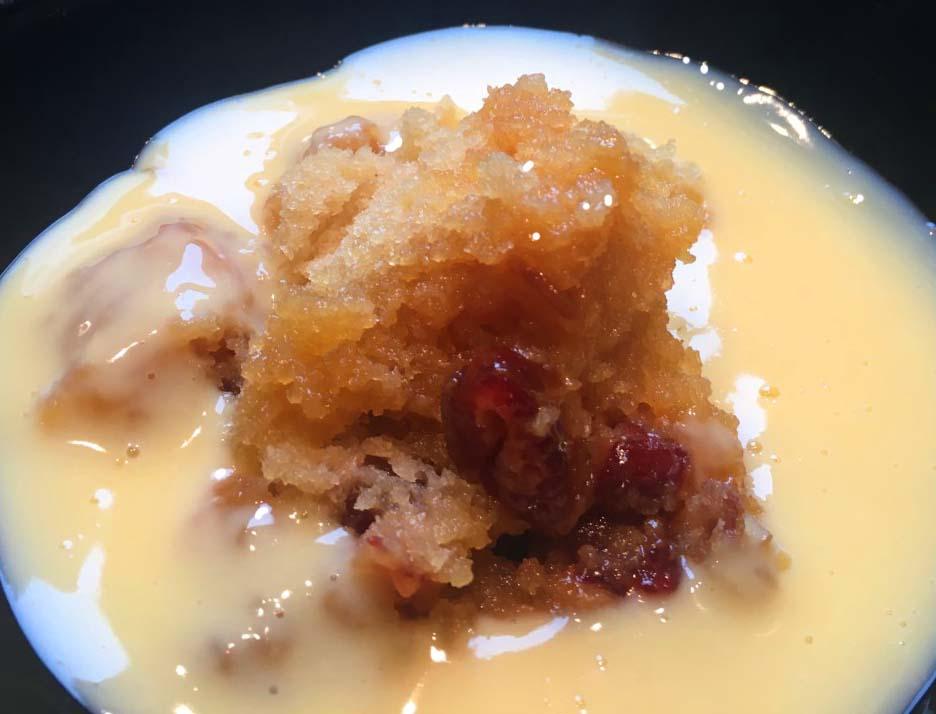 Method: Snip dates into smallish pieces, coat with a dusting of flour and set aside. If you are using jam, omit dates. Cream softened butter in bowl with sugar until light and fluffy (now you’ve had your five minute daily workout). Add egg and beat well with vanilla essence and tablespoon of golden syrup/honey. Beat in flour with sufficient milk to make a stiff dropping consistency. Fold in dates. (If I use jam I often fold in a small handful of blueberries if I have any). Grease a standard 2 pint pudding basin with butter and dollop two generous tablespoons of golden syrup/honey (or jam) into the base. Tip in the batter and smooth top. Cover with cling film, then tin foil and steam for 1½ hours on a very low simmer. When ready, tip out onto plate, drizzle with a little more golden syrup/honey and serve with lashings of creamy custard. Then do 36 deep thigh squats (not compulsory). If there are only two of you then this pudding will last two days. To re-heat, drizzle over more golden syrup/honey and microwave for a few minutes. Totally delish. Hope you enjoy!

I would also like to use this opportunity to thank everyone involved at the Bulletin for keeping the newspaper going through this most trying of times, putting themselves at risk to bring you the latest news along with hopefully, some light relief. And of course the nursing staff and medics here in the public health sector who are battling daily to make Majorca a safer place for everyone.