Summer Blog: The Sound of Silence

In May 2007 I was spoilt rotten. I was handed a VIP pass to the Spanish Grand Prix as a guest of Spyker. A motorcycle scooped me up at the entrance to the Circuit de Barcelona-Catalunya and I spent the day mingling with the Formula One glitterati in the paddock. While I will treasure the memories forever, it’s fair to say that if you want to see all the action of an F1 race you’re better off watching from your sofa at home. 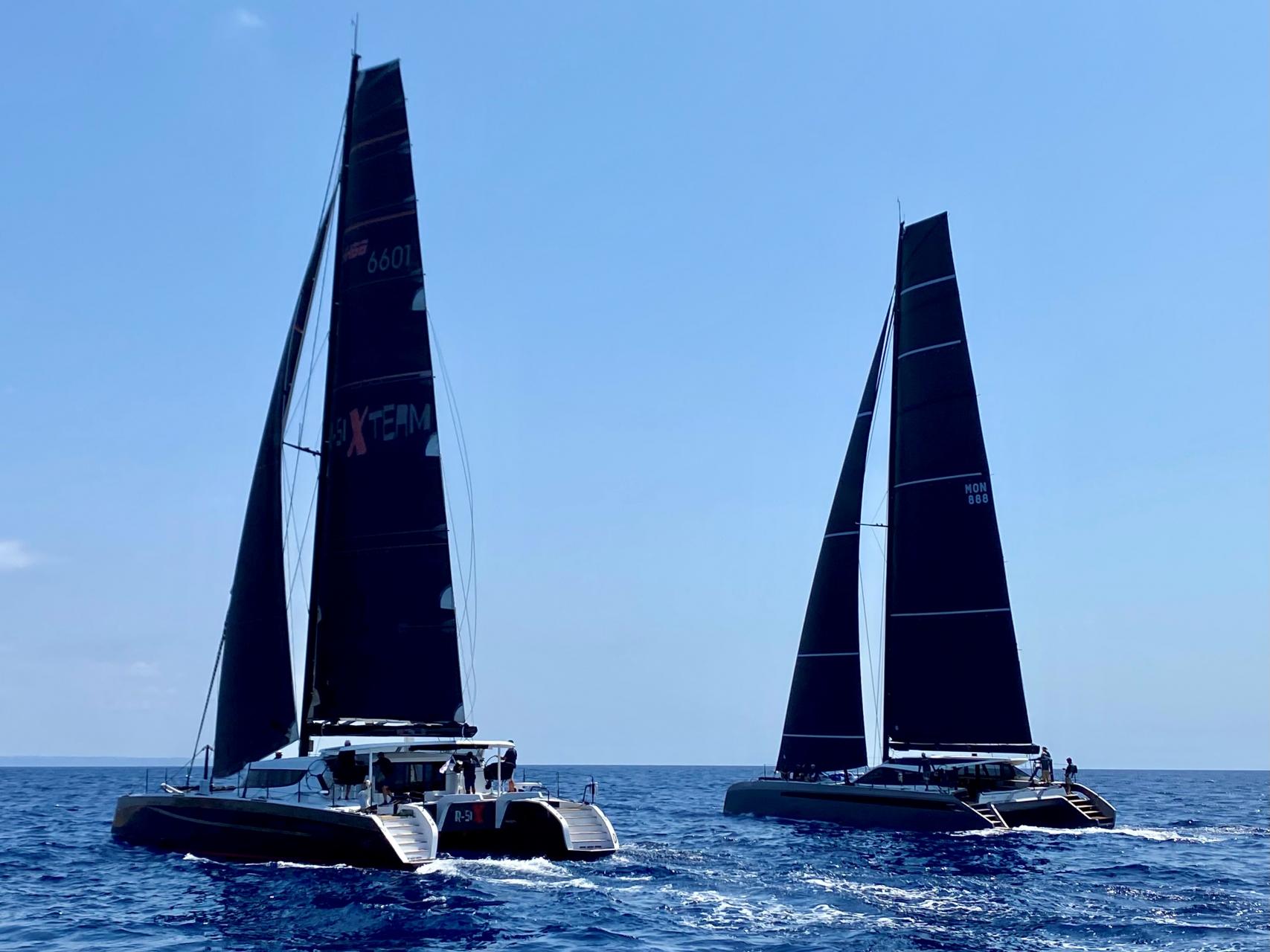 A garage gives you privileged front-row access to the drivers, mechanics, and all the action in the pit lane, but it’s hard to get a handle on the wider picture. Apparently Felipe Massa won, with Lewis Hamilton in second and local favourite Fernando Alonso in third, but I didn’t experience the same thrill of them chasing the finish line as you’d get from a fully-commentated Formula One Management TV broadcast. It’s not a complaint, just an observation. 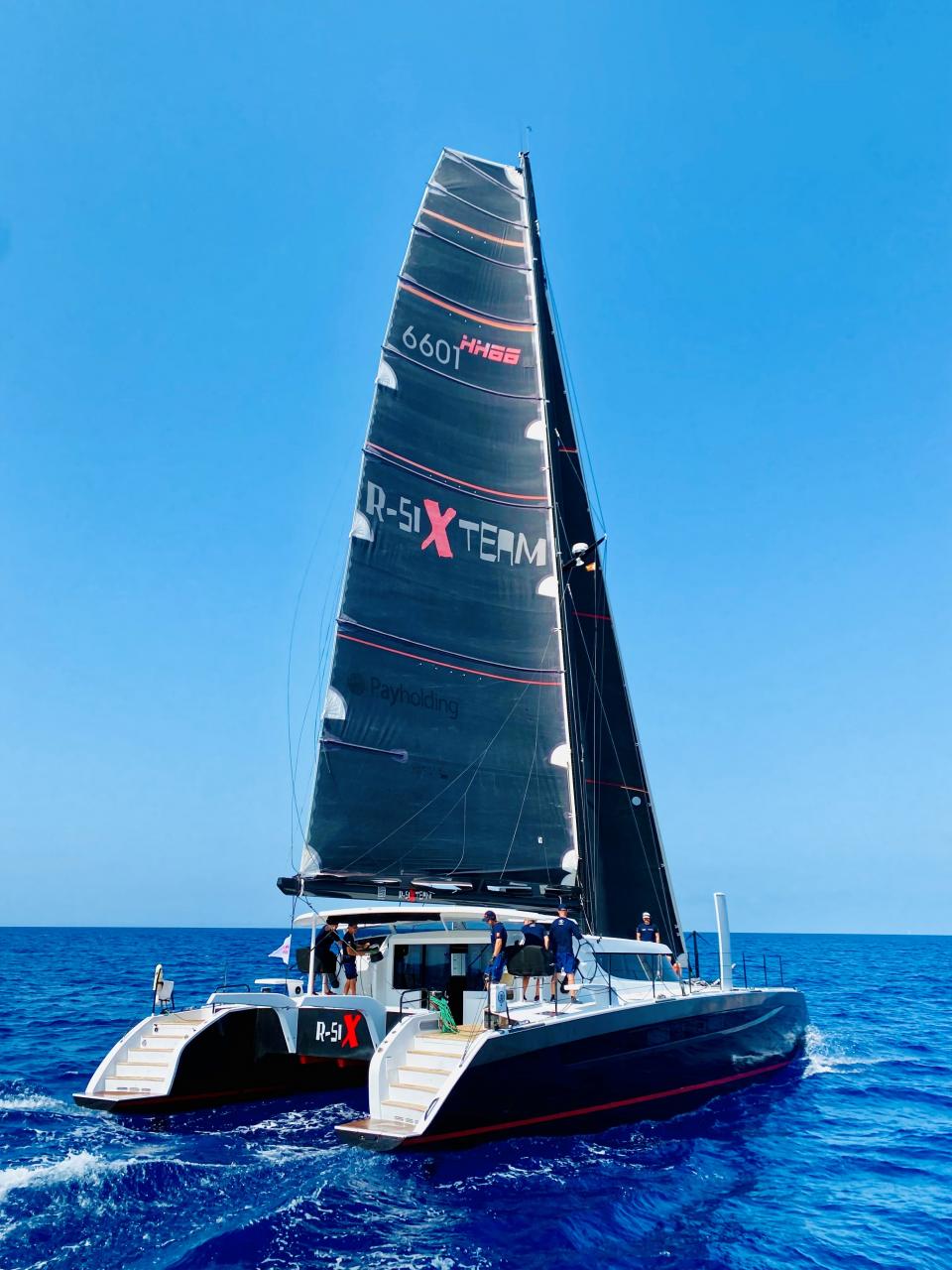 I felt something similar last weekend. On Saturday, I was invited on the VIP chase boat for day two of The 2021 Multihull Cup. It would be reasonable to expect some kind of RIB to chase a regatta, but the clue was in the ‘VIP’. Indeed, we were hosted on board a palatial Silent 55 - the entry-level model in Silent Yachts’ solar-electric range of catamarans. While it’s far easier to pour bubbles, nibble canapés and use the bathroom (we had a choice of four loos) on a 55-foot yacht, it doesn’t have the nimble agility to get into the mix with the competitors. This left guests focussing more attention on the hospitality (AKA Prosecco and pasta salad) than the action between the four entrants of The Multihull Cup: 84-foot Green Marine Allegra, 68-foot Gunboat Highland Fling, 66-foot Gunboat Coco de Mer and 66-foot Hudson Hakes (HH) R-Six. Again, not a complaint, just an observation. 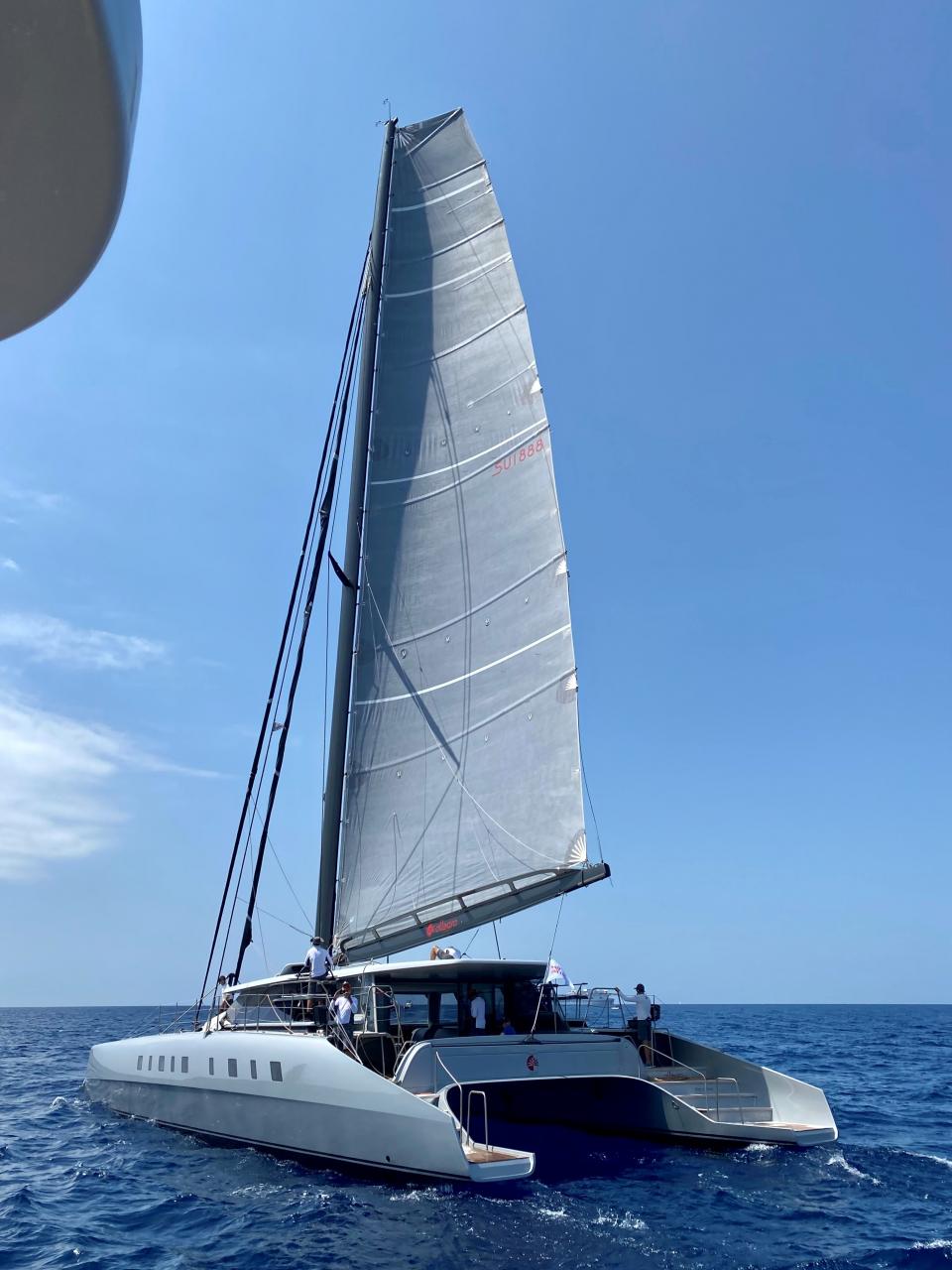 The plan was to be in position at the Illa del Toro start line for a midday kick-off. In position we were, but alas the poor man whose job it was to hump around a giant cylindrical marker buoy was still awaiting instructions from the committee boat on where to stick it. The wind changed direction, then changed again. The action didn’t get underway until almost 13:30, by which time we were greedily tucking into the main course. Thank goodness Captain Simon hollered out a one-minute warning, giving us notice to put our forks down and grab our binoculars.

The fleet made a hasty departure towards the first checkpoint, Illot del Sec, just off Sol de Mallorca, and the Silent 55 went off in pursuit. Although we could, in theory, have kept up, in practice it’s unwise to open the throttle to a 20-knot top speed as the batteries would drain rather rapidly. Instead, we opted to linger close to the Cala Figuera lighthouse and wait for the yachts to round the Illot. We whooped and waved as they passed us on the long leg west to the next checkpoint at Cap de Sa Mola, Andratx. Meanwhile, we cruised to our final lingering destination in the shelter of Illa del Toro. There was now an hour or so wait before the winner would take the finish line. 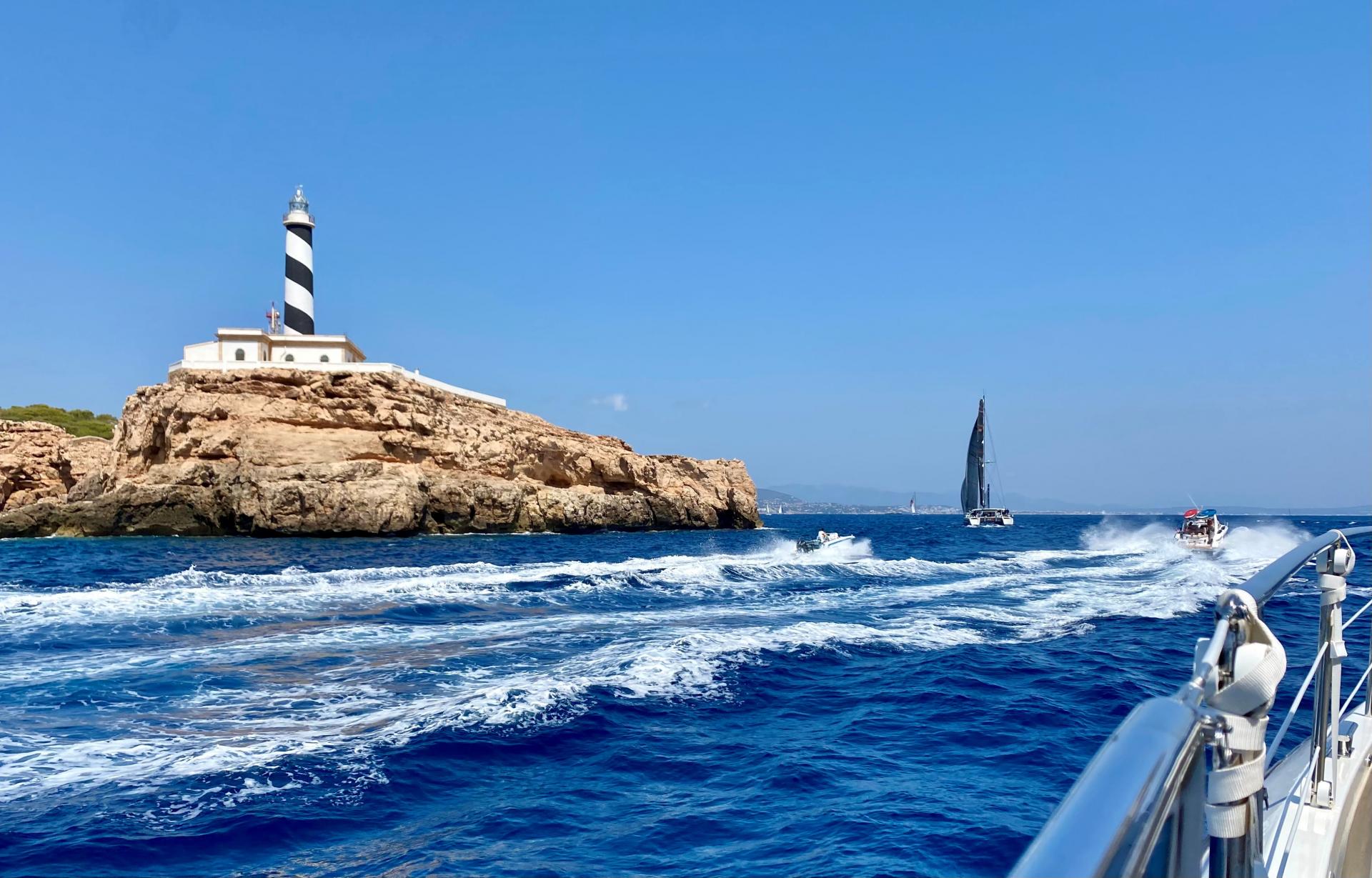 While some ‘crewmates’ opted for some postprandial inner eyelid gazing, I took the opportunity to be nosy - as usual. I learned a lot about the yacht (unlimited range, ocean-going capabilities, zero emissions, noise-free, fume-free, eight battery banks with eight years warranty, and 25 solar panels with 25 years warranty) and was surprised to see the batteries were still 79% full after several hours’ cruising with pumping AC, a full American-style fridge and an in-demand De’Longhi coffee machine - turns out the yacht is constantly replenishing her energy levels from the sun.

I also learned a lot about my fellow VIPs, such as writer and broadcaster Lucie Gardiner who has a penchant for private submersibles and border terriers (her nine-year-old BT is called Bean), and competitive sailor, photographer and crazily-talented artist Anna Boulton who has been commissioned to paint the likes of Spirit 100 Gaia and super maxi SHK Scallywag. It was enough to make the most confident feel inadequate. 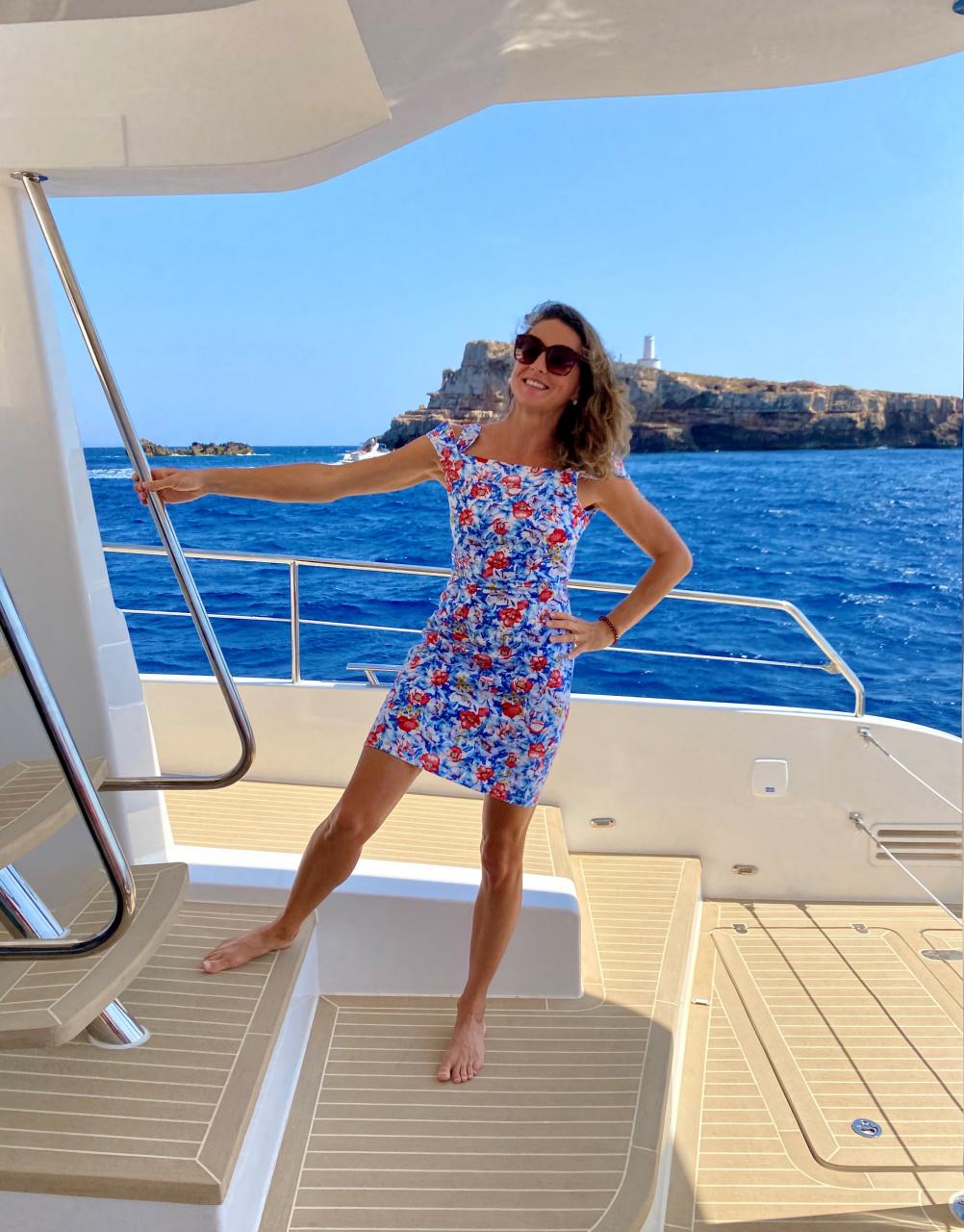 Well, after more than two hours of competitive racing, the top two contestants came into eyesight - Allegra and Highland Fling. They’d reached speeds of up to 20 knots and had just three metres separating them as they neared the finish line. In the end, Allegra took the victory, the second of three consecutive wins across three days of racing. Needless to say, her crew were delighted to hold The Multihull Cup aloft at prize-giving on Sunday.