View of the cliff where the wastewater flows into the sea. | Michel's

Residents in the Sa Mola estate in Puerto Andratx as well as people who walk in the area are insisting that the town hall investigates the source of wastewater spills and acts accordingly.

These spills, it is understood, are not uncommon. In fact, where they have travelled down rocks to the sea opposite the islet of S'Aguilot there is green slime and a white trail; layers of silt have built up.

At the end of the Calle Ullastre, there are pipes which are under a residential area. The wastewater would seem to come from these.

Recent heavy rain made the spills more pronounced, but residents say that they were far from being an isolated case. 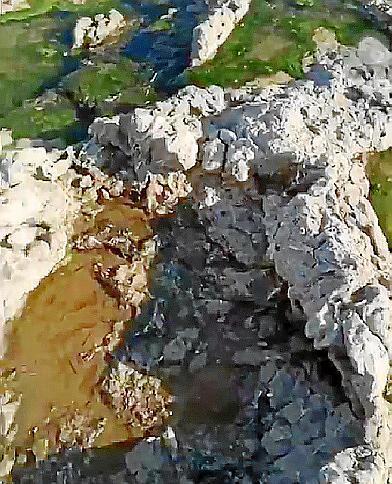 As well as wanting the town hall to fix the problem, they want to know what exactly has been discharged.

Problems such as this are not unknown elsewhere in Puerto Andratx. There have, for example, been spills opposite the Brismar Hotel.

They are attributed to the obsolescence of the pipes and to the pressure these pipes are put under in summer.