The emergency services yesterday responded to over 50 weather-related incidents.
The gale force winds peaked at 109 kilometres in Binissalem and just over 100 kph in Sa Pobla and Santa Maria del Cami where a warehouse caught fire.

The winds reached their strongest between 12.30 and 13.30 with gusts of 95 kilometres per hour recorded in Bunyola, 78 kph at Palma airport, 72 kph in Pollensa and 70 kph in Campos. 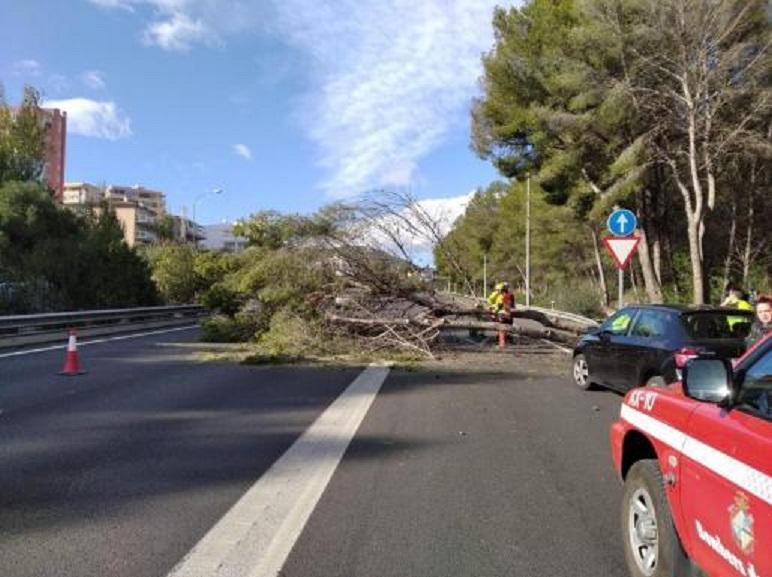 The centre and north east of the island remained on level two orange alert for adverse weather conditions until 3pm when it was downgraded to level one.

The vast majority of the incidents handled by the various fire brigades were fallen trees, debris blown off root tops and balconies and some constructural damage to old buildings.
The wind is expected to ease today but the emergency services are still urging people to be careful when driving and also to stay away from tress, balconies and the coast.

At least 7 flights that were due to land in Majorca yesterday had to be diverted because of high winds.

A Eurowings flight en-route from Hanover to Palma was forced to land in Minorca instead of Palma and a Netjet Europe plane coming from Leeds in the UK was diverted to Barcelona. Easyjet passengers coming to to Majorca from Liverpool and London ended up in Minorca and another Easyjet flight from London plus a Laudamotion plane en-route from Munich to Son Sant Joan were diverted to Ibiza. Passengers on a Vueling flight to Palma found themselves back in Barcelona after the pilot was unable to land in Palma.

It?s a lot calmer in the Balearic Islands today but the yellow alert is still in force for strong winds.