The American Chef In Majorca, Jeff Harter, is now under strict home quarantine for the next two weeks after having spent a week in Son Espases Hospital having contracted the coronavirus.

Jeff, a private chef who has lived in Majorca for the past 13 years, is originally from Boulder, Colorado and his skills range from first class cooking to extreme skiing, marathon running, rock climbing, surfing...you name it, he is a fit and healthy young man and has spent days trying to figure out when, how and why he caught the virus. 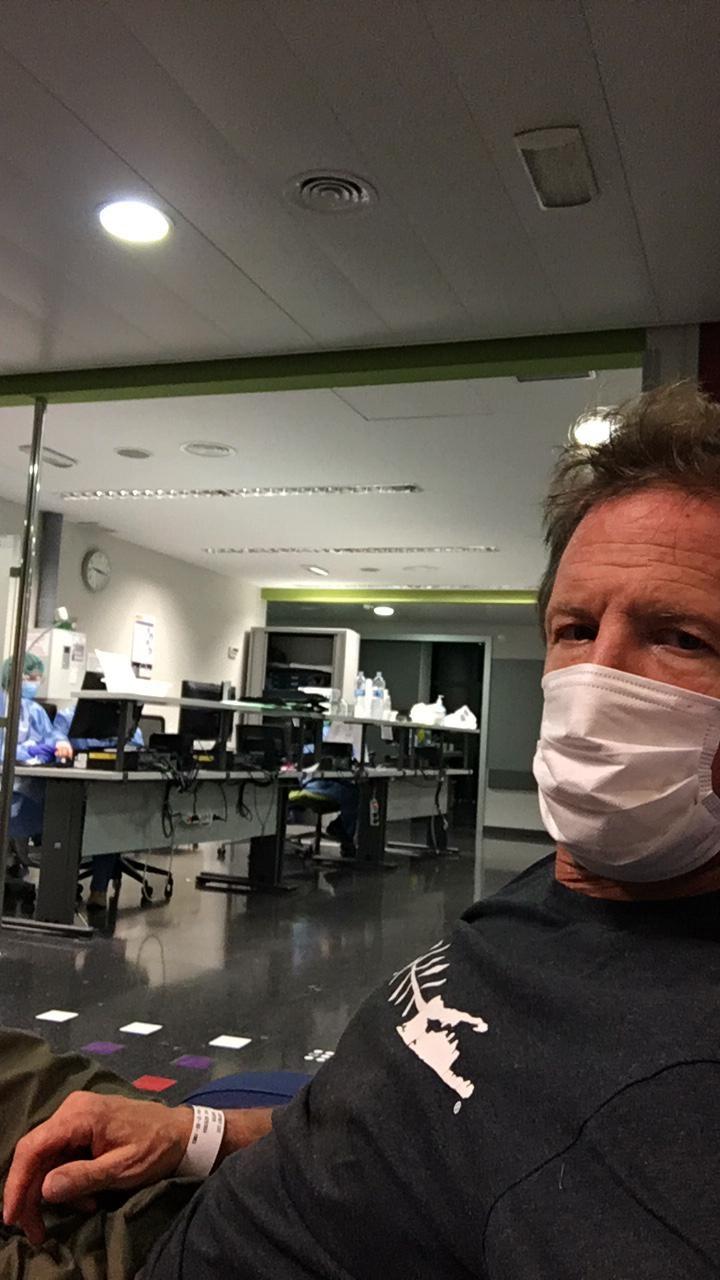 In the weeks prior to the lockdown he did attend a few dinners and parties and has drawn up a timeline as he continues to try and figure out how he caught the virus. He has been in contact with everyone he met during that period.

On March 10, Jeff went to a luncheon. No one there got it, so it did not come from there.

Wednesday, March 11, Jeff went to a supermarket and he believes he contracted it there.

“There was an old woman behind me and she had a hacking cough and just didn’t stop and she was not covering her mouth or anything, then she was touching the food around me to make more room. I just don’t know, but she is the only who fits,” he told the Bulletin from home isolation yesterday. 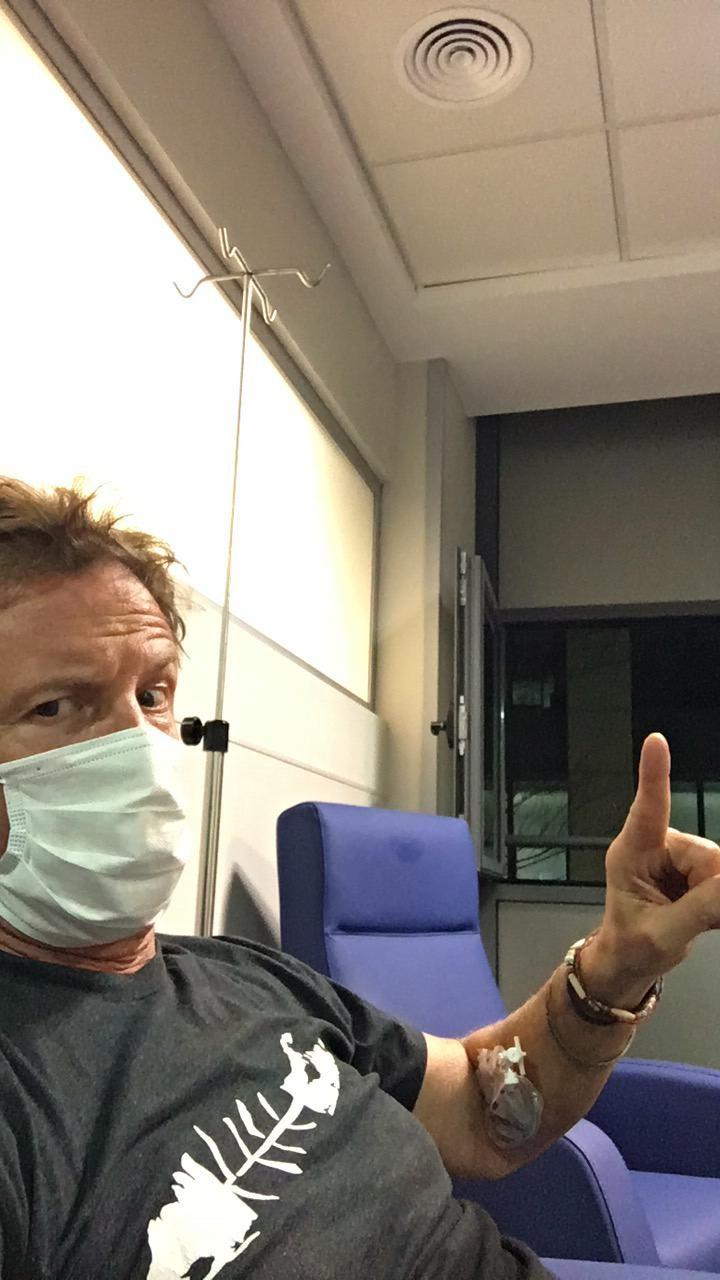 On Thursday, March 12 Jeff held a birthday dinner. Hardly anyone in the restaurant, so he doubts he caught it there.

He then went to two more private gatherings but no one reported any symptoms.

Then, on Friday, March 20, ten days after assumed exposure Jeff believed he had some symptoms, aches and constantly clearing his throat. 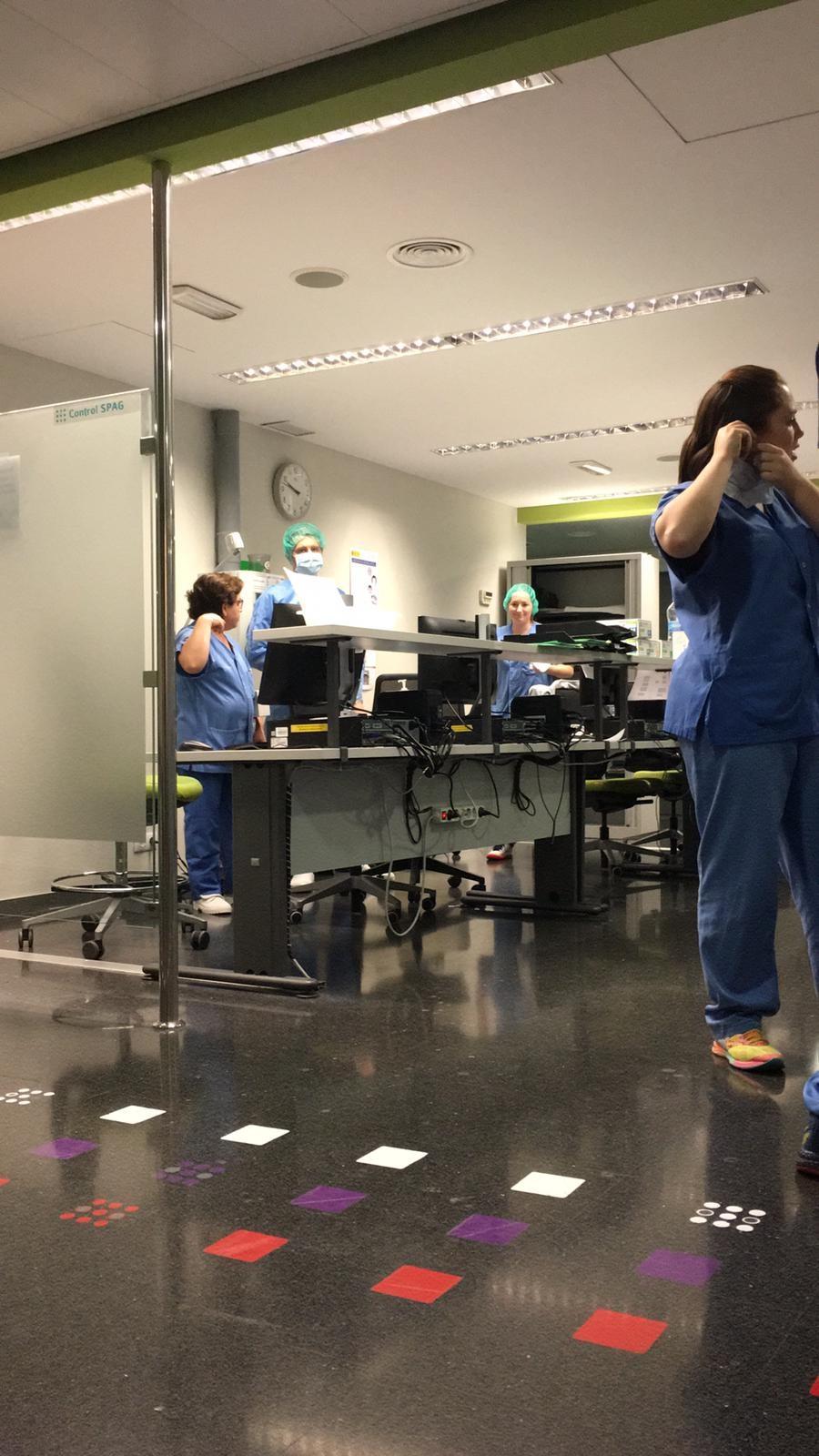 “I had a little cough and a runny nose and by March 25, I had developed a really bad cough and then, on March 27, the fever set in. I also began to feel dizzy. I also lost my sense of taste and smell, so I called 061 and spoke to some three different people and, according to protocol, was advised to give it another three days."

“During that time, my temperature kept rising, I was waking up soaking wet in bed, it was crazy. So I called 061 again and went to my local PAC on March 31 - the following day I drove myself to Son Espases." 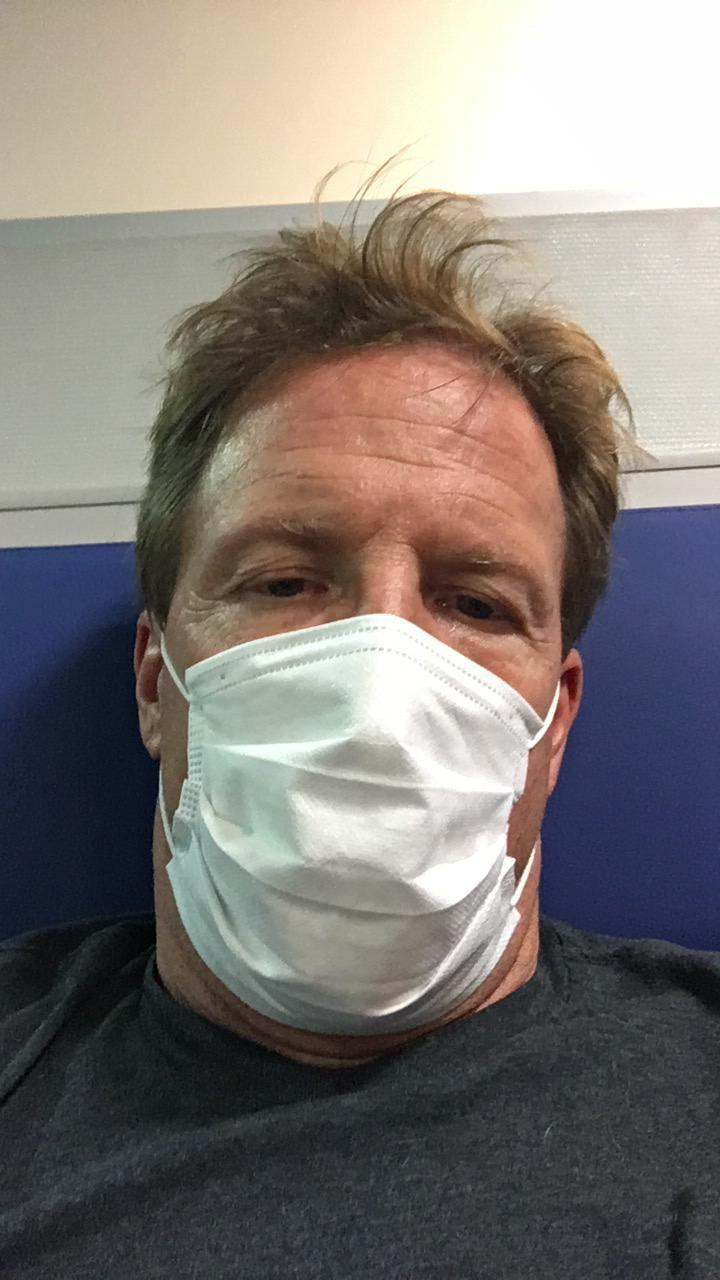 “I was given a chest X-ray, they took some blood samples and I waited. It was weird. There were only three other people in A&E, all waiting for their virus results too. When I eventually got the X-ray results I was told that I had pneumonia. I was like ‘wow’, totally freaked out. I was not expecting that. Then they told me I had to be admitted, that freaked me even more. I asked if I could be given a prescription and self medicate myself at home, but I was told no. I don’t know. I took some time to think and decided to drive home."

“Two hours later I got a call from the Guardia Civil who told me that I needed to be in hospital. They even came out to escort me to Son Espases. As I was able to drive, they preferred me to travel alone." 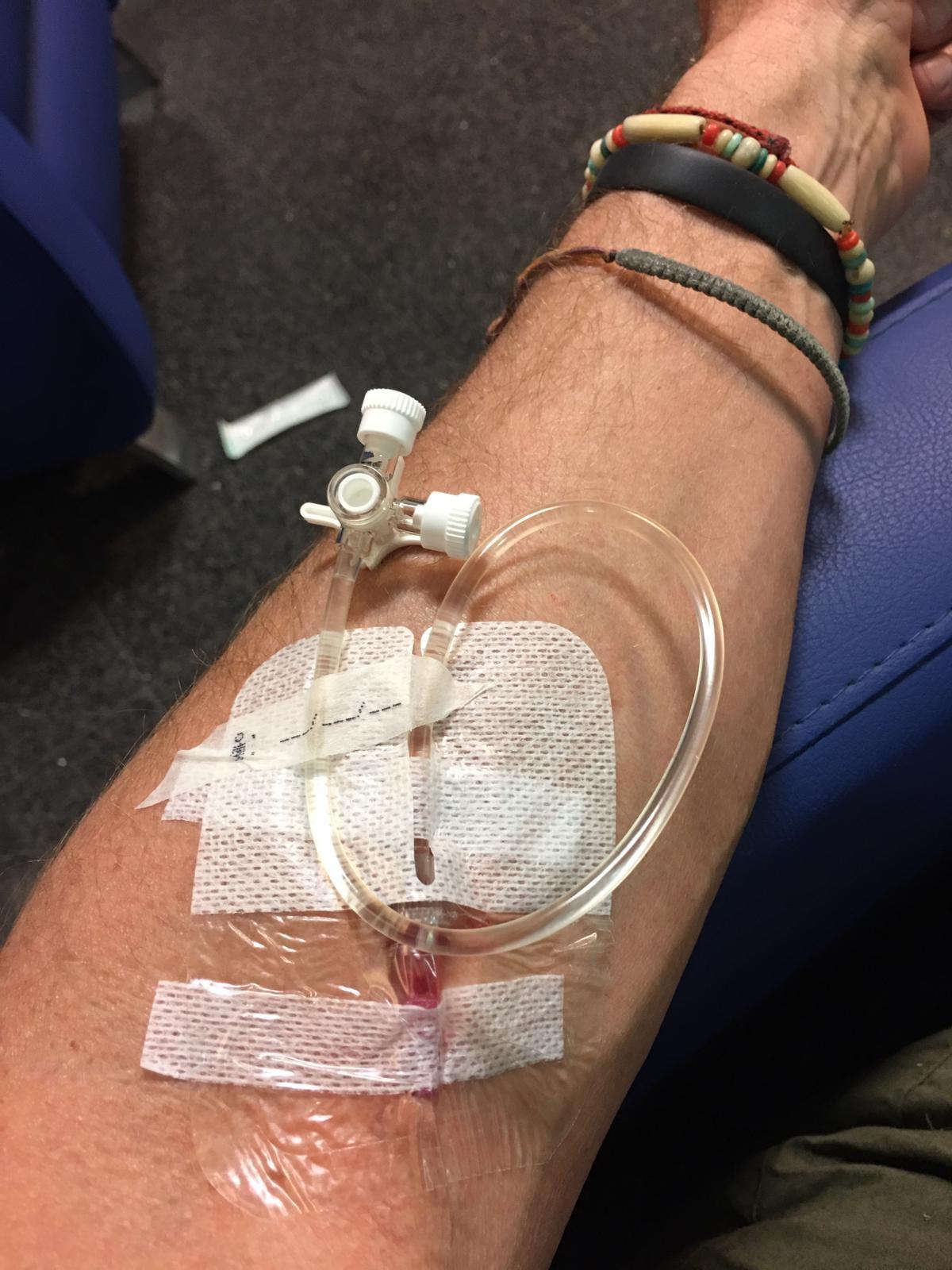 “That’s when I finally realised that this was serious and on arrival I was admitted and underwent the two tests for the virus and both came back positive. I was administered three types of drugs, one is which is being used in some other countries for malaria, another was to attack the bacteria in my lungs and the other was to stop blood clots in the lungs, that was a daily injection in the stomach."

“And this went on for six days. Then I was given a CT scan, that was intense but the results showed that my lungs were clear and that I had pretty much responded well to the treatment. They decided to keep me in for another two days before I was eventually discharged and I am now under two weeks of strict self quarantine at home with Son Espases staff calling me every day to check up on how I am."

“While the whole process was pretty freaky, the medical staff at Son Espases were first class, out of this world. I was checked on by nurses in protective clothing four times a day, saw a doctor every other and was given all the information I needed."

“Everyone at Son Espases who I came into contact with were totally awesome and I guess that goes for the entire hospital staff considering what they are having to deal with."

“All the way through my blood pressure was good, my oxygen levels were 94% to 97%, my heart rate was 55, my vitals were OK, I guess my body had the immune system to fight the virus."

“Everyday we could hear the staff clapping and cheering as another patient was given the all clear and discharged. I was given a round of applause when I left. Yeah, it was pretty emotional."

“Thinking back, maybe I had been a little stupid back in early March going to the parties with all the finger food. It was kind of surreal looking back, we were all getting together and talking about the virus but I guess we didn’t realise just how serious this thing is. I don’t have any underlying illnesses, although 30 years ago I was training for the San Diego marathon. I was working 12 hours a day then running like mad at night and I don’t think was eating enough and developed pneumonia. I had a lung and a half full of liquid, doctors told me had I left it another two days, I could have died."

“Then some ten years ago, I developed two bouts of bronchitis, so I guess my lungs are my weak spot. But I’m a surfer, skier, runner, I’m extremely active but what’s clear to me, and my wife, who caught a mild dose of the virus but didn’t need hospital care, is that this virus takes no victims."

“We all talked and had read a lot about it and it appeared to mainly target the elderly, people with under lying illnesses and those who are over weight. But no. No prisoners with this one."

“I guess I should not have waited three days, as advised by the PAC; but that’s the protocol and I fully understand why the health service wants to keep as many people as possible away from hospitals."

“My message, having gone through this is don’t wait. Contact your local PAC or call 061 straight away, as soon as you may think you have any of the symptoms. Don’t sit back and hope it will just go away, time is of the essence and it could be a decision of life or death. The medical system here is first class and please, please, do what the doctors and the government are telling us all to do. You’re not only putting yourself in danger but those close to you and other members of the general public."

“I don’t know what the next stage is. There is talk of easing the restrictions. Perhaps Spain will adopt a bar-code wristband system like in a few other countries which indicates that you’ve had the virus, have been cured and have the antibodies to fight it when people can eventually go out and about. But what ever happens, social distancing is going to be key for a long time."

“In the meantime, I’m in lockdown. I still have a slight cough and I am taking it very easy. Lots of rest and relaxation. I’ve done a few push ups and sits up and deep breathing but I’m not pushing myself. I’m teaching myself the guitar, reading a lot and of course cooking, got to film my videos for my Youtube channel and your website,” he joked.

“But, we’re so lucky here in Majorca, Spain and Europe. The free health service is out of this world and my sister in the States is terrified, millions of Americans are because there is no state health care and no one knows if or when some kind of health package is going to introduced. Until some positive action is taken, the situation in the States is going to get much worse, people are scared to stay at home while frightened to go to medical centres. Who is going to pay the bill?"

“Full marks to Majorca for having got this under control and please, do the right thing and stay safe.”

Referring to your report, As an American.

As an Englishman I had a similar experience in The Miramar Clinic in Palma. I broke my Femur on my way home to Gatwick at Palma Airport about 15 yrs ago. I was taken to the Miramar Clinic. in Palma The first thing I noticed was that the hospital was spotlessly clean. It was Christmas time and the wonderful staff made sure I was comfortable and happy as well as my wife, who was allowed to stay with me. The treatment I received from the Doctors and Nurses was of the highest standard. The food was of hotel standard and the Administrator made sure I received a English newspaper every day. The guy who wheeled me down to the operating theatre had a great sense of humour which enabled me to I have no fear of the forth coming surgery. When I got home I had an x-ray taken at my local hospital and the Orthopaedic Surgeon looked at my x-ray, turned to me and said 'Perfect Management'. I think that sums up my stay in hospital in the wonderful Miramar Clinic in Mallorca.

"Perhaps Spain will adopt a bar-code wristband system like in a few other countries which indicates that you’ve had the virus." - How about a star sign on the sleeve if you haven't had the virus? Maybe also open special camps outside cities with barbed wires for those people and keep them there. It would make it possible to run drug tests and vaccine tests on these people to make a cure for the virus.