Big fall in Covid cases in the Balearics

551 cases reported by the local ministry for health

More people in hospital with Covid.

The Health Ministry reported today another 551 positive cases of coronavirus in the Balearic Islands and a positivity rate of 14.12 percent of all diagnostic tests performed. The government also confirmed one new death and the health care situation continues to rise.

Today there were 288 people admitted for complications of the disease and another 46 were being treated in the critical care units. The COVID occupancy rate in the ICU is already 16 percent. 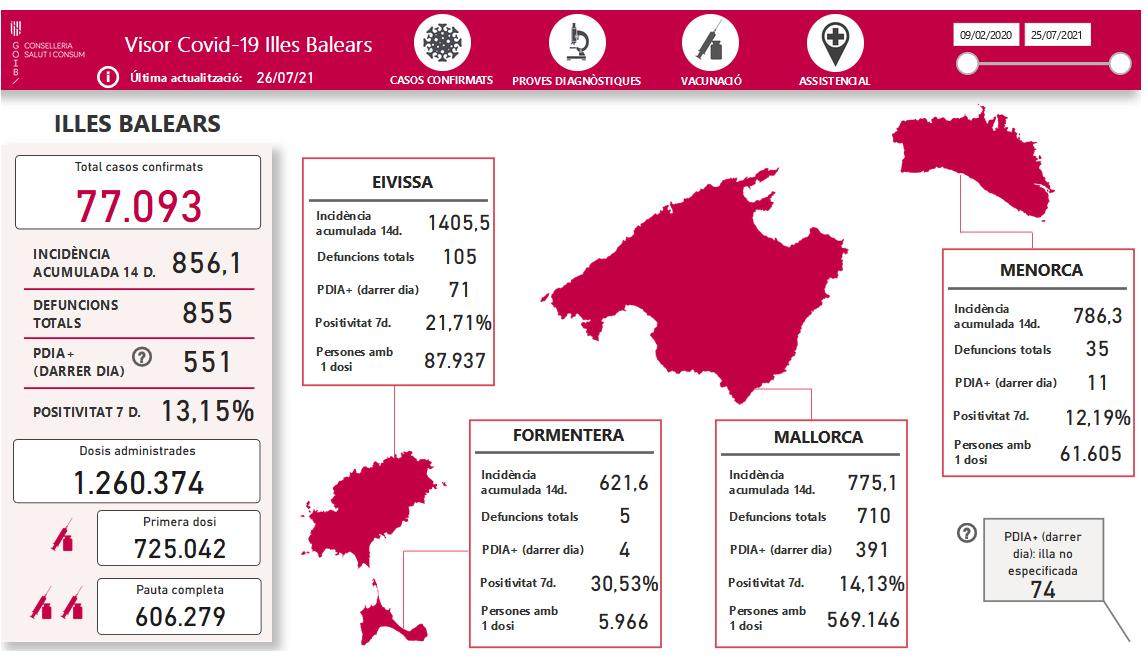 In terms of vaccination, 70 % of the target population has at least received one dose and 58.5 % have the completed course.

But, COVID cases in intensive care have rises to March levels.

Today, cases of coronavirus infection in the ICU rose to 46 patients, with 288 on the wards, and the overall number of patients admitted in critical condition is at the levels of last March, the peak of the third wave in the Balearics.

Although the number of patients in the ICU is similar to that of March, hospital admissions already exceed those of the third wave of infections.

In Minorca, six were in ICU and 27 in the hospital. In Formentera there were no active ICUs.

The explosion of infections that has occurred since the end of June is having an effect on the number of hospitalisations. According to data from the Health Ministry, the number of admissions and cases in ICU has tripled since the beginning of July. On July 1, the number of sick people being treated in hospitals was eleven in intensive care and 55 on the wards.

In addition to patients in hospitals, the primary care is currently caring for another 10,642 patients.

The multiplication of cases in the last month has complicated the work of the tracers who at the moment no longer know how 60% of the infections occur, according to the latest data published by the Ministry of Health.

Jacob Nielsen | about 1 year ago

My family and me booked a trip to Mallorca starting on the 30th of July, but we are very concerned with the amount of Covid infections now. We really hope this will get under control, since my son is only 10 years old and not vaccinated. We are even considering to not go, even though no refund is currently possible.