"There was shelling, airplanes were flying over, it was very scary."

'We will fight, even if Europe doesn't help us,' Ukrainian refugee says | Youtube: Reuters

Refugees fleeing Russia's invasion of Ukraine continued to pour across its western borders on Saturday, with around 100,000 reaching Poland in two days, finding temporary sanctuary in sports halls and train stations.

At the Hungarian border town of Beregsurany, 69-year-old Ilona Varga crossed into the European Union on foot, leaving behind her home, shop and hopes she might soon return.

"My kids are telling me to move over to Hungary for good, and they are right," Varga said. "But it is so hard to leave everything behind, I was born here, I grew up here, I have my work here, everything ties me here."

In Poland, which has the region's largest Ukrainian community of about 1 million people, a further 9,000 people had crossed the border since 7 a.m. on Saturday, Deputy Interior Minister Pawel Szefernaker told a news conference.

At Medyka in southern Poland, some 85 km (50 miles) from Lviv in western Ukraine, thousands of Ukrainians waited for officials to process them as refugees. 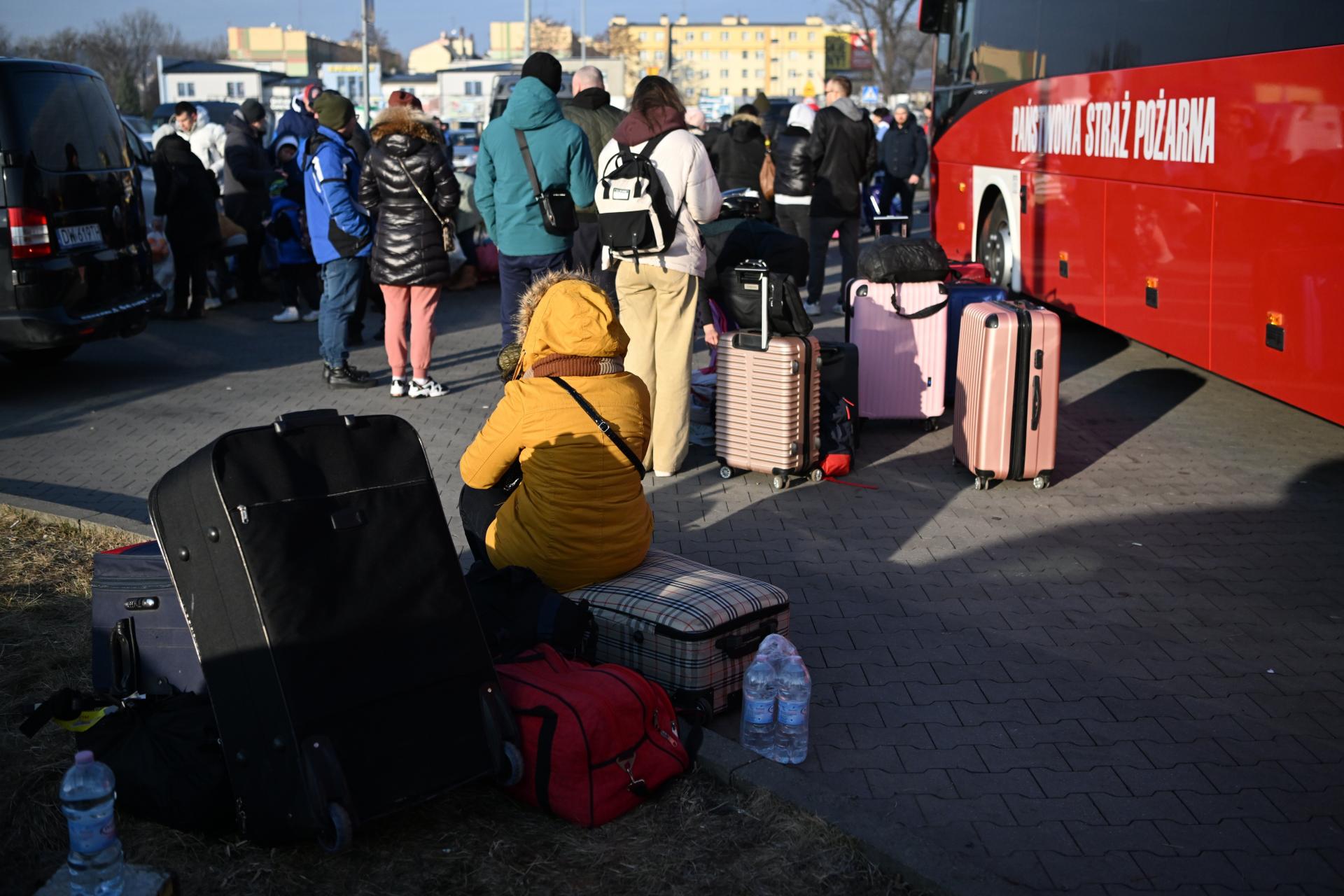 "I arrived today at 3 a.m. and I am waiting for my wife," Taras, 25, told Reuters on the Polish side of the crossing. "She called me from the Ukrainian side and there is a 30 kilometre queue of cars and people. She said she does not know when she will cross."

Czech railways sent special trains that arrived early on Saturday at the Polish border carrying Ukrainians living in the Czech Republic to meet family members who had escaped the war.

"We came to the border by taxi and we are going to Prague to meet my husband, to safety," Miroslava Krackovska said at the reception centre.

A woman gasped and wiped away tears as she saw news on her mobile phone, passing the phone quickly to the woman next to her.

Two buses, carrying ethnic Bulgarians from Odessa arrived early on Saturday in Bulgaria and a third one was on its way. Bulgaria has sent another four buses to Kyiv to evacuate people from its 250,000 minority in Ukraine.

A Ukrainian woman married to a Bulgarian described the shelling in her town and another recounted her struggle to flee.

"For two days we sat on our luggage, hiding in the bathrooms," Tanya Mitova, an ethic Bulgarian, told national BNT channel just after she arrived in the northeastern village of Durankulak, close to the border with Romania.

"There was shelling, airplanes were flying over, it was very scary."

Yes, well, there's plenty of interest. It's probably the #1 story in mainstream media and otherwise. Although according to you, no interest. I suppose you're another who thinks Mallorca tourism is nonexistent this year. The covid story is over. Sorry. Now it's Putin. For good reason.

It is interesting to see no comments about Russia invading Ukraine. Funny that the start of a third world war (maybe) garners no messages of support for Ukraine or criticising Russia. Maybe because it doesn't impinge on ones civil liberties like social distancing or having to wear a mask.