Royals attended a gala concert on Thursday night in Minorca

The King and Queen of Spain in Minorca on Thursday night. | Josep Bagur Gomila

Queen Letizia of Spain has gained a global reputation for her style and on Thursday night in Minorca, she stole the show at a gala concert, wearing a stunning 80 euro black-and-white paisley dress from Mango while King Felipe opted for a grey pinstriped suit. 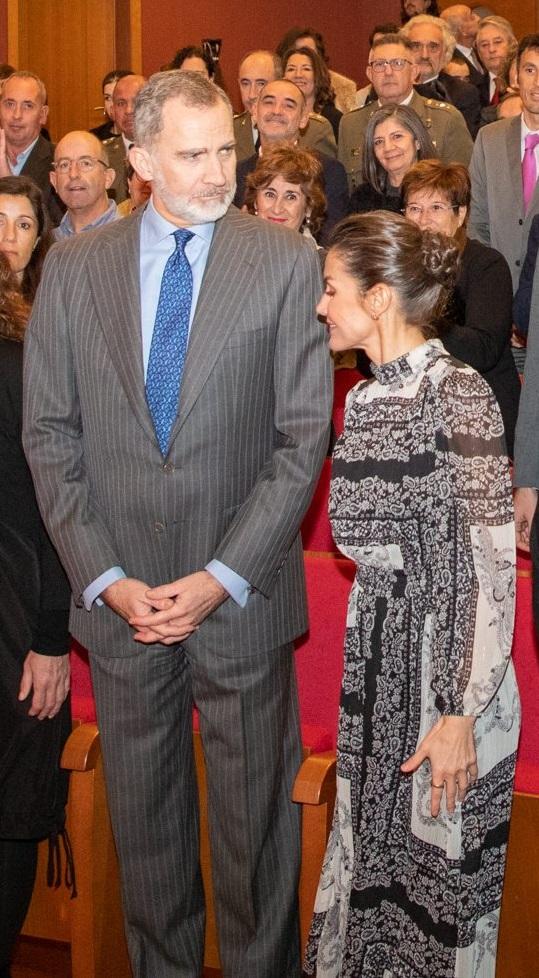 It is the first time the couple were seen since the death of King Constantine of Greece, Felipe’s uncle and the brother of his mother, the former Queen Sofia.

Deposed by military rulers and spurned by his subjects who voted to ditch the monarchy in 1974, Constantine II was the only son of King Paul and Queen Frederica of Greece.
He suffered from chronic heart and mobility problems and had been treated in an Athens hospital since last week.

Constantine II, godfather to Prince William and a second cousin to King Charles, would be buried privately in Tatoi, the summer palace of the former Greek royal family, where his ancestors are also laid to rest, the government said.

The funeral procession will be held on Jan. 16 at the Orthodox Metropolitan Cathedral of Athens, his office said.

Constantine II, who was regular visitor to Mallorca, was 27 years old and had only recently ascended to the throne, in 1964, when he was forced into exile with a young family in late 1967.

He would not return for decades to Greece, where he was deeply unpopular for his decision to swear-in the colonels who seized power in April 1967. He would briefly cooperate with them before staging a failed counter-coup.

The military junta forced him to flee the country and abolished the monarchy in 1973. In another referendum after the fall of the junta a year later, Greece rejected monarchy again, making Constantine the last Greek monarch.

Constantine was married to Princess Anne-Marie, the youngest daughter of King Frederick IX of Denmark, and had five children. Constantine’s elder sister is Queen Sophia of Spain.

Known as “The Ex” or just “Glucksberg” - from the German House of Glucksberg which has connections with royalty throughout Europe - Constantine spent almost 50 years in exile in Italy and London, before quietly returning to settle in Greece in 2013.

“The eventful journey of the former King Constantine marked and was marked by turbulent moments in Greece’s modern history, wounds healed by the choices, the free conscience and the maturity of our people,“ Prime Minister Kyriakos Mitsotakis said, offering his condolences to the former king’s family.
Constantine’s death, he said, is “the formal epilogue of a chapter that has been definitively closed with the 1974 referendum.”