After a weekend when I bought a new stick deodorant, the instructions said “Remove cap and push up bottom” – I’m walking funny but the room smells lovely if I break wind ! – Real Mallorca regained their home form “mojo” with a hard-fought 2-1 win against fellow automatic promotion contenders Almeria on Sunday afternoon.

This wasn’t just any victory, it was one of those wins that gave Real Mallorca credibility in their quest for one of these all important top two places against a direct rival. The scoreline also gives us the head to head count over the Andalucians, a statistic that could be important come the end of the season. It was a vital win after the disappointment of the Espanyol defeat, as we finished the game two points ahead of the Barcelona side and five above Almeria and Leganes.

The first half was pretty even with both sides having long-range efforts saved. Almeria were ahead on possession but they lacked cohesion in the final third. In the 44th minute a Dani Rodriguez shot clearly hit the hand of Almeria defender Maras and a penalty was awarded. Abdon Prats stepped up to deceive Almeria’s Georgian ‘keeper Makaridze with a cheeky chipped spot kick, 1-0.

In the second half Almeria took the game by the scruff of the neck but their finishing wasn’t good as they failed to create any clear cut chances until near the end. By now Baba, who made a return from injury, had replaced Galaretta who limped off with a thigh muscle problem in the 37th minute, and began to show the form he produced in La Liga last season.

Nicknamed “the Octopus” because of his long legs, he broke up several Almeria attacks and stamped his authority in the Mallorca engine room. The Ghanaian international showed on Sunday just how much of an integral part he is in our push for La Liga football.

Almeria then began to look a threat but Manolo Reina in the Mallorca goal was more than capable of keeping that all-important clean sheet. Raillo and Valjent at the heart of defence were both back to their imperial best and the expected threat from giant striker Sadiq just didn’t materialise. 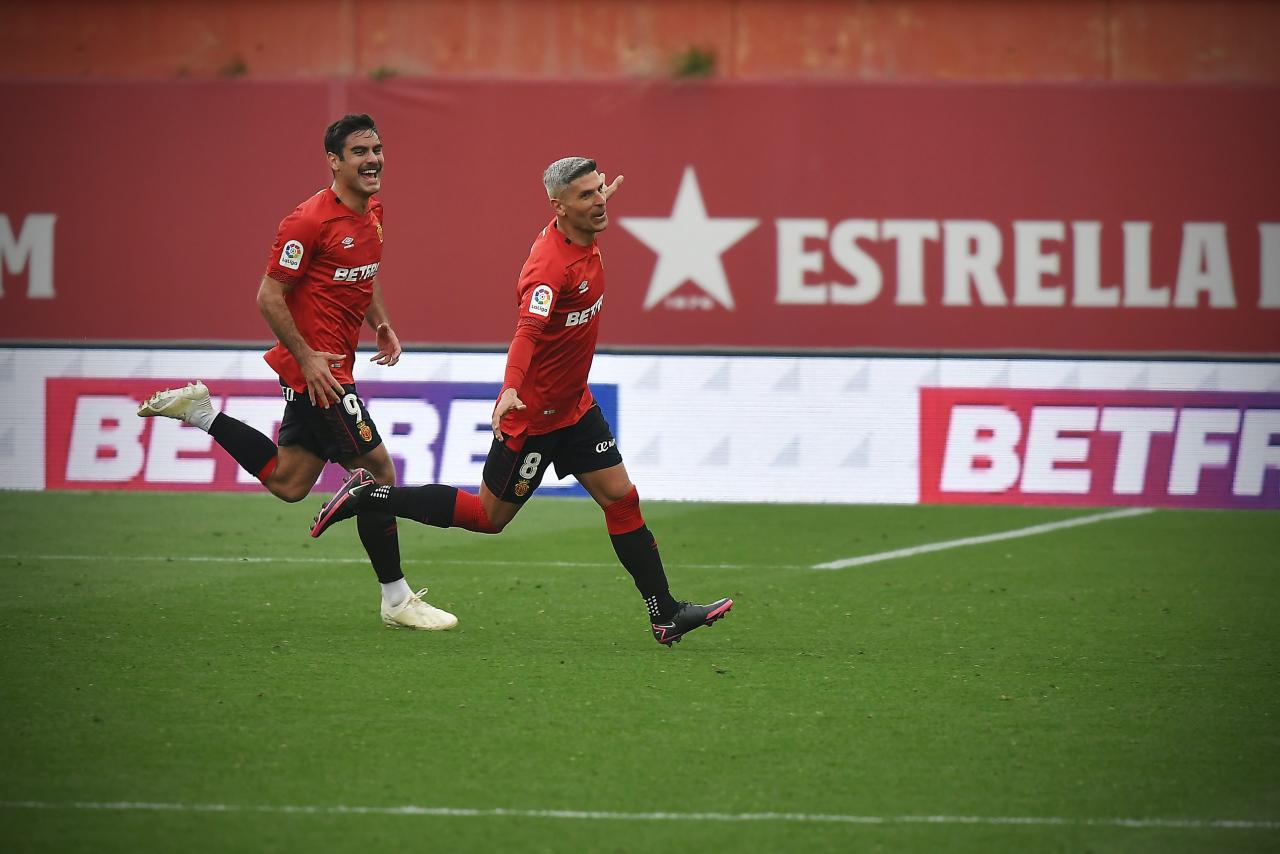 In the 68th minute came one of the top contenders for goal of the season from our nearly 37-year-old (Benjamin Button) Salva Sevilla ! Abdon gained possession after Baba had broken up an Almeria attack. He squared the ball to Sanchez who deftly let the ball run between his legs to Salva. He ran into the area, wrong-footing two defenders who were sent sprawling in his wake; transferring the ball from his left to right foot, Salva’s oh so delicate lob went into the far corner of the net to score a brilliant goal, 2-0.

Almeria then made changes and upped the tempo. Villar’s shot went just wide, as it was all hands to the pump in the Mallorca defence. What looked like a late consolation for the visitors was somehow scrambled off the line by Olivan as Mallorca hung on to regain top spot.

SUMMING UP : Mallorca ended this match with a triumph of enormous value that keeps them leading La Liga SmartBank with 54 points. Again it would have been a game a Son Moix full of fans would have been in raptures about, especially Salva’s goal which was without any stretch of the imagination world class.

Next Saturday at 9 pm Mallorca play away at Logroñes. Espanyol have a tricky game at 5th placed Sporting Gijon. If we win and Espanyol lose, we will go back to being five points clear at the top. There’s still a long way to go but Sunday’s victory for Real Mallorca was a huge morale booster.

AND FINALLY, a young traveller is lost in a Chinese forest when he comes across a house. Knocking on the door, it’s opened by a really old Chinese mandarin. “I’m lost,” says the traveller, “Can you put me up for the night ?” The mandarin says “Yes, but on one condition.

If you so much as lay a finger on my daughter, I will inflict on you the three worst Chinese tortures know to man.” The young man agrees, thinking that the daughter must be a fair age herself. At dinner she appears and is a real looker. She’s clearly attracted to the young traveller and he has mutual feelings.

After dinner he retires to bed heeding the old man’s warning. During the night he can bear the temptation no longer and decides to sneak into the daughter’s room. Near dawn he creeps back to his room exhausted ! An hour later he awakes to find pressure on his chest. It’s a large rock with a note which reads “Chinese Torture No. 1 – Large rock on chest.”

The traveller walks to the window and throws the rock out. As he does so, he notices another note “Chinese Torture No. 2 – Rock tied to left testicle.” In a blind panic, the man glances down and sees the rope is getting close to the end. Figuring a few broken bones are better than castration, he jumps out of the window after the rock. As he plummets downward, he sees a large sign on the ground that reads “Chinese Torture No. 3 – Right testicle tied to bedpost !!”