Next Sunday at 4 pm Mallorca play away against Sporting Gijon

Summary of the match between Mallorca and Cartagena. | Última hora

After a weekend when I heard the Billy Connolly story about the Glasgow policeman who found a drunk unconscious in the middle of Sauchiehall Street – the policeman dragged the drunk into Queen Street because he couldn’t spell Sauchiehall !!

– Real Mallorca went five points clear (on an impressive 60) of new second-placed side Almeria and six ahead of Espanyol in third (with 14 games left to play) after an uncomfortable 2-1 win against a feisty Cartagena side who made it difficult for the Palma boys, especially in the first half. Both teams had agendas in this game.

Mallorca to put even more daylight between them and the chasing duo of Almeria and Espanyol, and Cartagena to confirm their good run of just one defeat in their last five games and move away from the relegation places. The rainy conditions didn’t make for a free-flowing game, indeed it wasn’t a good watch, but the result is all that matters.

The visitors almost took the lead in the 17th minute. Elady put the ball into the centre of the penalty area where Delmas shot point blank. Reina pulled off a wonder save, then blocked the rebound before ace marksman Ruben Castro fired over when it looked easier to score. However, luckily, that move was adjudged to be offside.

Amath then went millimetres wide for Mallorca as they began to get on top. In the 37th minute the referee annulled a goal for offside from Dani Rodriguez that seemed legal until VAR was consulted. It looked like both sides would finish the half with a stalemate but in the second minute of first half added-on time, Mallorca took the lead with another brilliant goal.

Sanchez passed to Salva Sevilla who showed that “age doesn’t wither with class” as he sent a delicious ball between the lines for Amath to run onto before slipping it past a stranded Chichizola in the visiting goal for his 8th strike of the season, 1-0.

The second half began with Cartagena in the faces of the Mallorca players and saw the referee brandishing the yellow card for some tasty tackling. Then in the 63rd minute against the run of play the Carthaginians drew level.

They won a corner kick down the right, the ball was headed clear as far as Fornies just outside the penalty area, and he let rip from all of 25 yards, the ball flying through a sea of legs past Reina and finishing off in the net, 1-1. Cartagena celebrated like they’d won the league.

One thing that our coach Luis Garcia Plaza has instilled in the minds of his players is a never say die attitude and in the 80th minute Amath forced a penalty that nobody saw coming. His shot hit Andujar’s hand inside the area. It was one of those decisions that without technology would not have been signalled. Substitute striker Alvaro Gimenez sent the ‘keeper the wrong way with a strong shot into the top left corner of the net, 2-1. 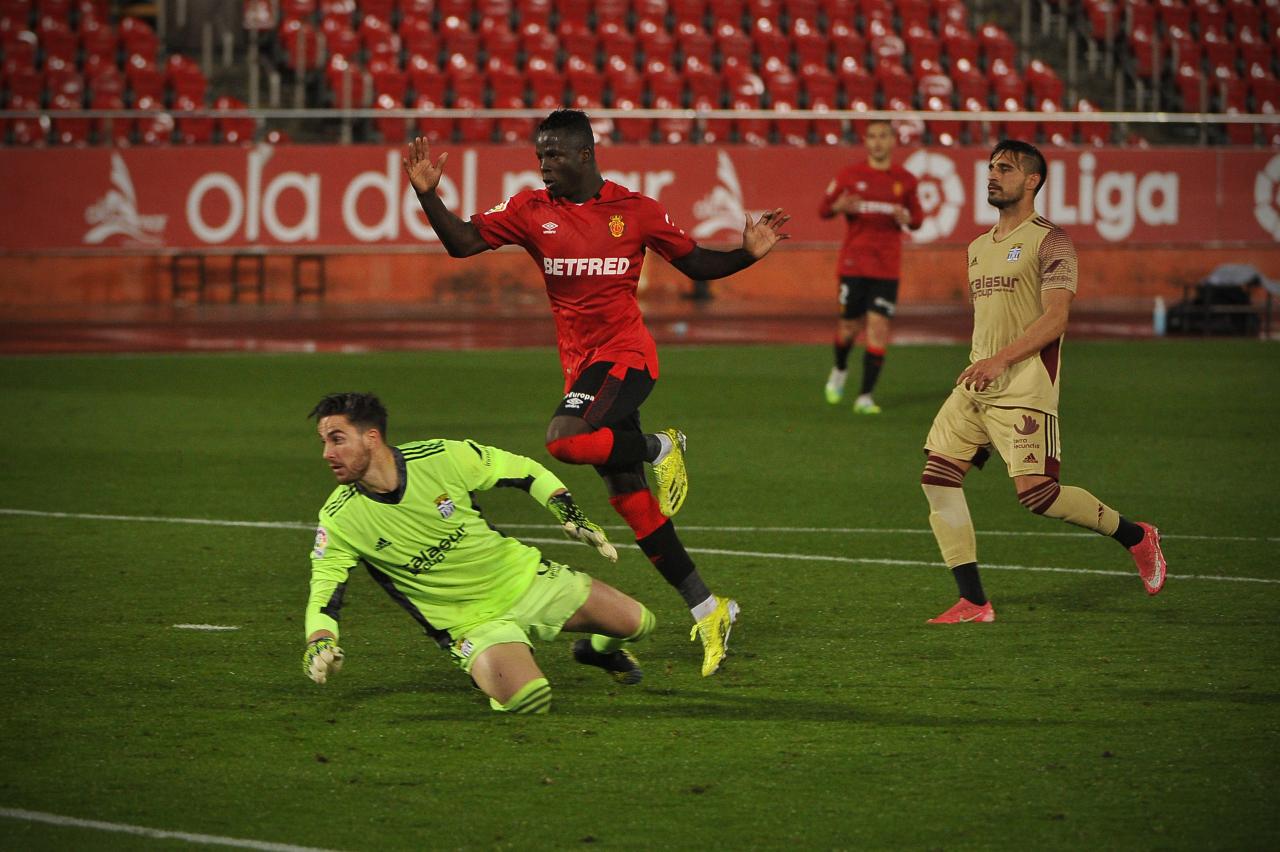 Call it the luck of the champions but Mallorca somehow were home and hosed showing great character in a game that looked to be heading for a 1-1 draw, catapulting the Palma side towards that all-important goal – a return to La Liga. It was a gutsy all-round team performance with the exception of Baba who got his customary yellow card and was guilty of giving the ball away far too often.

Next Sunday at 4 pm Mallorca play away against Sporting Gijon. This is a juicy game in prospect, Gijon unbeaten at home against Mallorca unbeaten away. We’ll come up against the league’s leading scorer (17) Uros Djurdjevic (nicknamed the Serbian Minotaur). We go into this game with four players on four yellow cards, Raillo, Valjent, Dani Rodriguez and Russo. Another watch from behind the sofa !!

A couple of years ago, Real Mallorca made a bit of a coup signing 18-year-old Japanese international Take Kubo on loan from Real Madrid for a season until, despite his four goals, we were relegated.

Since then, he’s been having rather a torrid time. His parent club wanted him to stay at La Liga level so he was loaned to Villareal. After a bright start there, his form dipped, caused by his lack of playing minutes under Unai Emery. Concerned again about his La Liga apprenticeship being held back, Real Madrid moved him on in January, this time to Getafe.

Again Kubo found it hard to get into the starting XI and his fledgling professional career looks to be taking several steps backwards. Mallorca fans loved Kubo and would have him back here in a heartbeat. There’s no doubt he was, as billed, one of the brightest young talents in world football. Who knows, if things go according to expectations, he might just grace the Son Moix hallowed turf again next season in La Liga !

AND FINALLY, I went for a take-away at my local Chinese the other day. The owner Xin comes from Hong Kong and he asked me “What you do for riving ?” I told him I was a bit of a comedian to which he replied “Go on then, change colour.”

“No,” I explained, “I’m not a chameleon, I’m a comedian.” So he then said “Tell me a joke, make me raff.” I replied “Okay, you want me to tell you a joke that makes you laugh ?” Just then there were flames shooting up from the stove. I shouted out “Wok, Wok !” and he shouted back “Who der ?”