It was this week that Euro 2020 has been postponed until 2021 as a result of the coronavirus crisis. The postponement means a free month to try to finish club competitions, especially La Liga fixtures. The situation was anticipated and it emerged that UEFA last week cancelled its hotel bookings in Copenhagen, one of the host cities.

Every European league will have time (virus permitting) to set out a new schedule, making room for postponed games, so it’s likely that La Liga will now finish at the end of June. This would also mean games will be played twice a week to speed up the process.

Stats showed that professional football in Spain is 1.37% of the country’s GDP and directly or indirectly creates 180,000 jobs, so it was important to come to some decision regarding postponed league games. If, as one publication suggested, La Liga was to stop immediately, up to 700 million euros would have been lost, 500 million euros from TV rights and 200 million from ticket and season ticket sales.

On the home front, Real Mallorca’s playing and backroom staff are on extended leave as football in Spain, along with just about everything else, is in lockdown. Gates at the Son Bibiloni training ground and Son Moix were well and truly locked on Monday and nobody knows when they will reopen again with 25% of games in La Liga 2019/20 still to play.

Players have been told to take their temperatures every day and have been given a strict training-from-home programme organised by Mallorca’s coaching staff and the club doctor Gustavo Lucas. Games will not return for two weeks (wishful thinking) and increasingly people wonder if they will come back at all this season, as everybody asks the question “When and how does this all end?” Sometimes I feel like a fugitive, even putting out the rubbish has me looking all around, dumping it in the bin quickly before scurrying back home!

If by some miracle, football comes back in a month or two, there would need to be a two or three week pre-season period. Players can’t be expected to play straight away after their enforced break, which also adds to the total disarray in planning ahead.Of course, football is way down the list when it comes to priorities but personally I miss watching Real Mallorca – A LOT. But health and safety comes first.La Liga is an elite category and the team is having a hard time adjusting to it.The big question is “Can Mallorca stay in top flight Spanish football?” Some of our players lack the quality and have shown their inexperience at this level, making the future unclear. Only eleven games are left and it seems only yesterday that the play-off heroics took centre stage. One thing we have already started doing is watching and waiting for one of our direct relegation rivals to slip up, which adds to the stress.

How to solve the problem of league-deciding games? How’s about a dance off, or even a bake off, to settle the outcome?

The latter would probably be impossible as most pampered footballers don’t even know where the kitchen is in their house, let alone how to knock up a sourdough loaf or a Victoria sponge.

AND FINALLY – in the future. Son to father: “Daddy, what did you do during the great Covid-19 panic buy?” “Well, son, I had the most dangerous job going, I was rear gunner on an Andrex truck.” 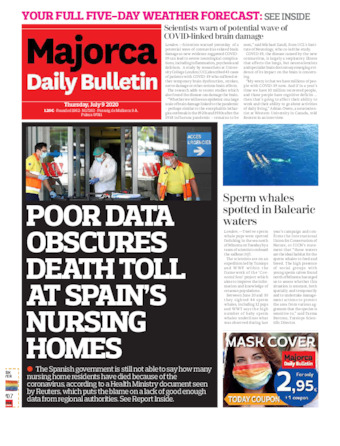