After a week when professional ice skater Hamish Gaman left this year’s “Dancing on Ice” – after injuring his finger while putting on a sock ! – Real Mallorca face another formidable automatic promotion contender, Almeria, this Sunday at 4 pm in the Son Moix. In the corresponding fixture in Almeria last December 2, we beat them 0-1 with a spectacular 91st minute scissor kick from Abdon Prats.

This season’s promotion push in La Liga SmartBank gathered steam when Madrid side Leganes catapulted themselves into the top four, beating Almeria 2-1 in a highly controversial VAR dominated match on Wednesday night. As far as Mallorca are concerned, it’s all got that bit more difficult and today’s game takes on a MUST WIN importance. As we reach match day 26 in the 2020/21 season, Mallorca stay top with a highly creditable 51 points, two ahead of Espanyol and Almeria with Leganes moving into fourth on 46. They have still to come to Palma at the end of March.

There’s only one thing that’s beginning to worry us Mallorquinistas and that’s our shaky home form. Rayo Vallecano, Fuenlabrada, Las Palmas and last Sunday Espanyol, have left Palma with the spoils. Albacete and Sporting Gijon drew here and that’s 14 points we’ve dropped at home. For a team whose aspirations are a quick return to the top table of Spanish football, playing at home, even without fans in the stadium, should be a nailed-on certain three points. Thankfully on the road we’ve been incredible and remain unbeaten after 12 games with eight wins and four draws.

So what’s the reason for these home game hiccups ? One of the main reasons in my opinion is that of all the matches we’ve lost in the Son Moix, we have been unable to come back and win after going behind. It’s worrying, and is something coach Luis Garcia Plaza needs to change. We need to replicate our 100% away form, especially with three other sides now breathing down our neck.

For Sunday’s game LGP has stated in his pre-match video link-up that Baba and Sastre are fit again and will be on the bench. He also said there’s a doubt regarding an important player but he wouldn’t say which one it was.

One player who will start is Amath who’s scored in the last four games, something no Mallorca player has done since Albert Luque in 2001/01. We may also see the introduction of (on-loan-from-Cadiz) striker Alvaro Gimenez who scored 20 goals for Almeria in the 2018/19 season. Almeria come to Palma with a point to prove after they had what looked like a certain goal chalked off for hand ball by VAR.

They arrive as the league’s top scorers with 38, Espanyol have 37 and we’re on 34. Twelve of Almeria’s goals have come from their 6ft 4in Nigerian striker Umar Sadiq. He came from Partizan Belgrade in the Summer for 5 million Euros and now has a buy-out clause of 60 million. Almeria Portuguese coach Jose Gomez has such a good squad that in a recent game he made eleven changes to his starting line-up.

The owner of Almeria is a Saudi Arabian investor called Turki Al-Sheikh who’s bank-rolling the team in a race for promotion in an attempt to eventually challenge Spain’s footballing giants. There’s no doubt Almeria have lofty ambitions and the suggestions are that their resources only know the bounds of the league’s monetary structure. That means any large amount of money invested must not fall foul of the legislation put in place to protect Spanish clubs from unscrupulous owners. “Sheikh Rattle and Roll’s” ambition is to get into La Liga “rapido” and he wants the team to be the Manchester City of Spain.

Mallorca MUST win on Sunday and send out a clear message to Espanyol, who were fortunate to win here last Sunday. The message is : we’re top and intend staying there.

PS My biggest bugbear in modern football is all these teams trying to play out from the back. Barcelona (when they had a team under Guardiola !) started it, then took it to Man. City and it’s now gone global. Only so many teams can actually play out properly, the rest fail miserably. I’m of a certain vintage who prefers the tried and tested approach – just lump it north to our physically imposing target man. Better being a shovel-footed donkey than a defensive pass master. 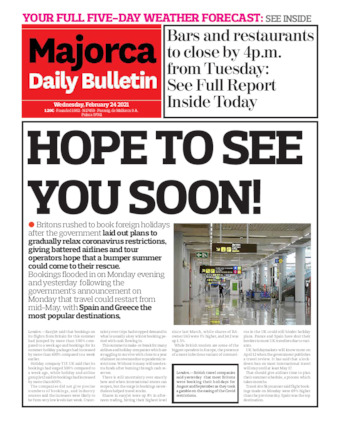