Aquaponics uses a symbiotic mix of growing fish and growing plants. The plants use the fish waste as food and in return clean the water that is returned back to the fish tank. Bacteria created by the fish waste collects on the growing medium and between the roots of the plant which is converted into usable fertilizer.

I recently had the opportunity to talk with and visit Michael Dellar who showed me his aquaponic garden that he built from recycled materials himself. There are several things that appeal to me about aquaponics, clean roots on salads and of course no weeds to pull. Here Michael explains about his garden:-

Can you tell me why you are interested in Aquaponics: Well I’m a zoologist and a botanist originally and despite my current occupation I’ve always held a fascination for plants. About 8 years ago I probably saw something on social media about aquaponics and since I’ve always kept fish, it developed from there.

So what is this system, it’s not just water is it?
No it’s not just water. In the main tank which is an old recycle bath, there are fish (Carp, Tench and cleaner fish) and their waste is mainly ammonia which spurs the growth of bacteria. Under the fish tank is a sump tank box from where the water is pumped.
Every now and again I add a little of the worm farm waste to give it a bit of a boost. I add it to the sump tank and it is then circulated through the various systems of pipes into the growing medium.

I don’t currently have enough fish and I plan to get more hence the need to add a boost now and again. You see that the water is a little pink? That’s from a bit of chelated iron. When the leaves of the plants are looking a little yellow this is a sign that iron needs to be added as the plants need it to make the chloroplasts. The water that isn’t taken up by the plants is then taken back to the main tank and around the system again. 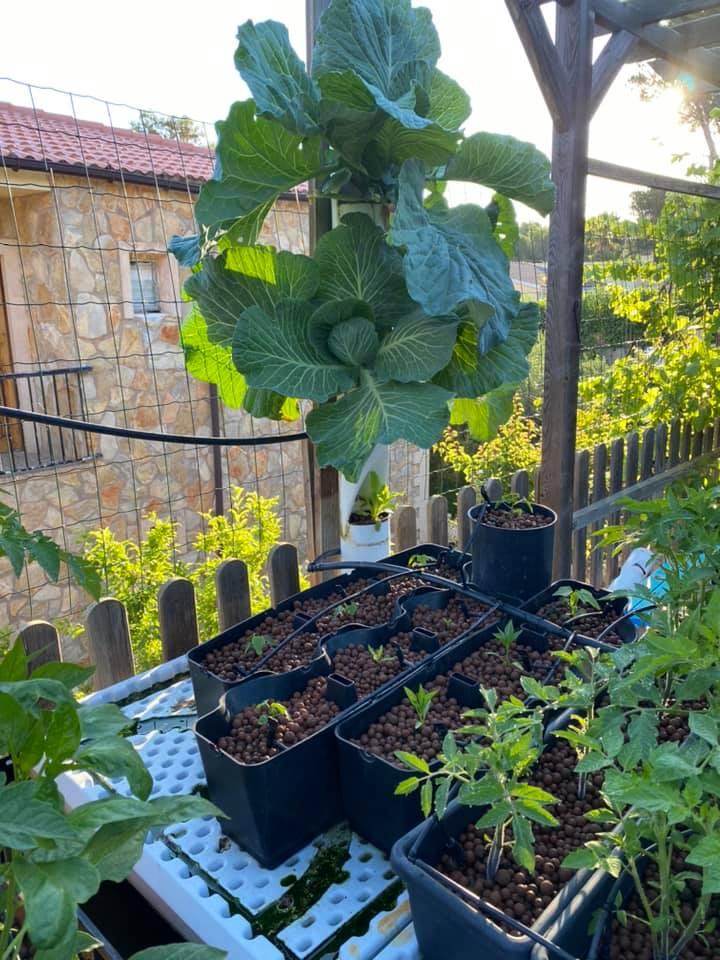 You mentioned that the ammonia from the fish helps the growth of bacteria can you tell me more?
The growing media is clay pellets. They soak up the water and also create a surface for bacteria to grow on. So the bacteria take what is coming out of the water system and turn it into Nitrates and nitrite which fertilize the plants. It’s like it’s own little eco system.

What about bugs, do you get the same as in soil?
No not at all and when you pick lettuce or whatever you have grown you don’t get soil within the leaves and around the roots nor do you have issues with weeds.

So what are you growing?
I started with upright towers growing rucula, lettuces, herbs etc.
I’ve grown tomatoes, chilli’s, papaya, onions, lemons, peppers, cucumbers, rucula, lettuce and herbs. Carrots and root veg don’t work because of the long tap roots. This year has been a bit of a test to see what could work and what may not.

It looks to me that it has worked really well.
Oh yes, it’s better than I had hoped and the thing is that everything has really sped up now because it takes about 6 months for the bacteria to grow and get established and feed the plants efficiently. We did actually grow some great cabbages as well this year, 3 times the size of the ones in the garden. My first phase of aquaponics wasn’t ideal for the fish as the plants were taking water directly from their tank and the water levels were going up and down I changed track and this is phase 2 which works much better with a separate sump tank and the fish water maintaining its levels. 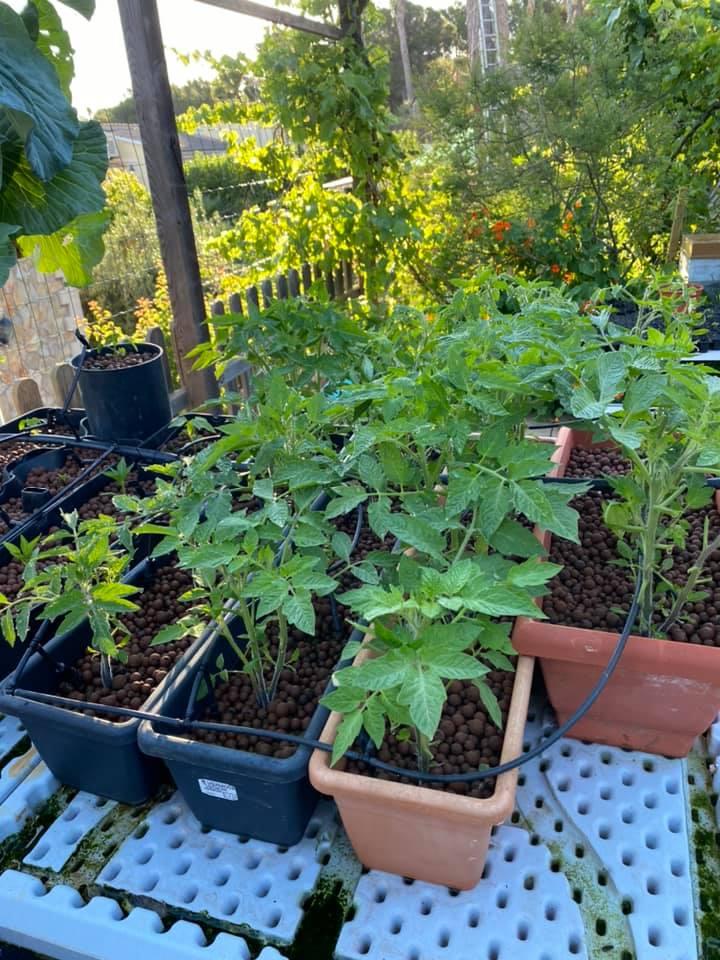 So whats next for you with this system?
The next phase is a much bigger fish tank with bigger fish. I would like to get some Tilapia which will grow to edible size within about 7 months.

So you can come out here and pick salad and a fish for dinner?
Yes indeed that would be great.

I think you said you grew papaya and I see banana here do they grow well with this system?
The water is slightly acid, which is an advantage for growing some of the more exotic plants, they don’t like the alkaline water straight out of the hose pipe.
The other thing is if you plant trees such as banana and papaya in the ground here there is a good chance they will get fungal infections which destroy the tree. You have to be lucky to succeed with that type of tree here. Our clay soil holds on to the water and just encourages rot for that type of plant. Tropical plants like lots of water but very well drained soil so they are perfectly suited to aquaponics.

I tried every thing in the garden first and that was one of the reasons that really attracted me to doing this because suddenly you can. The one thing I’ve learned about growing in ground here is stick to what the Mallorcans grow. Exotics require special root stocks to survive the conditions here, I daresay with time they will become available. 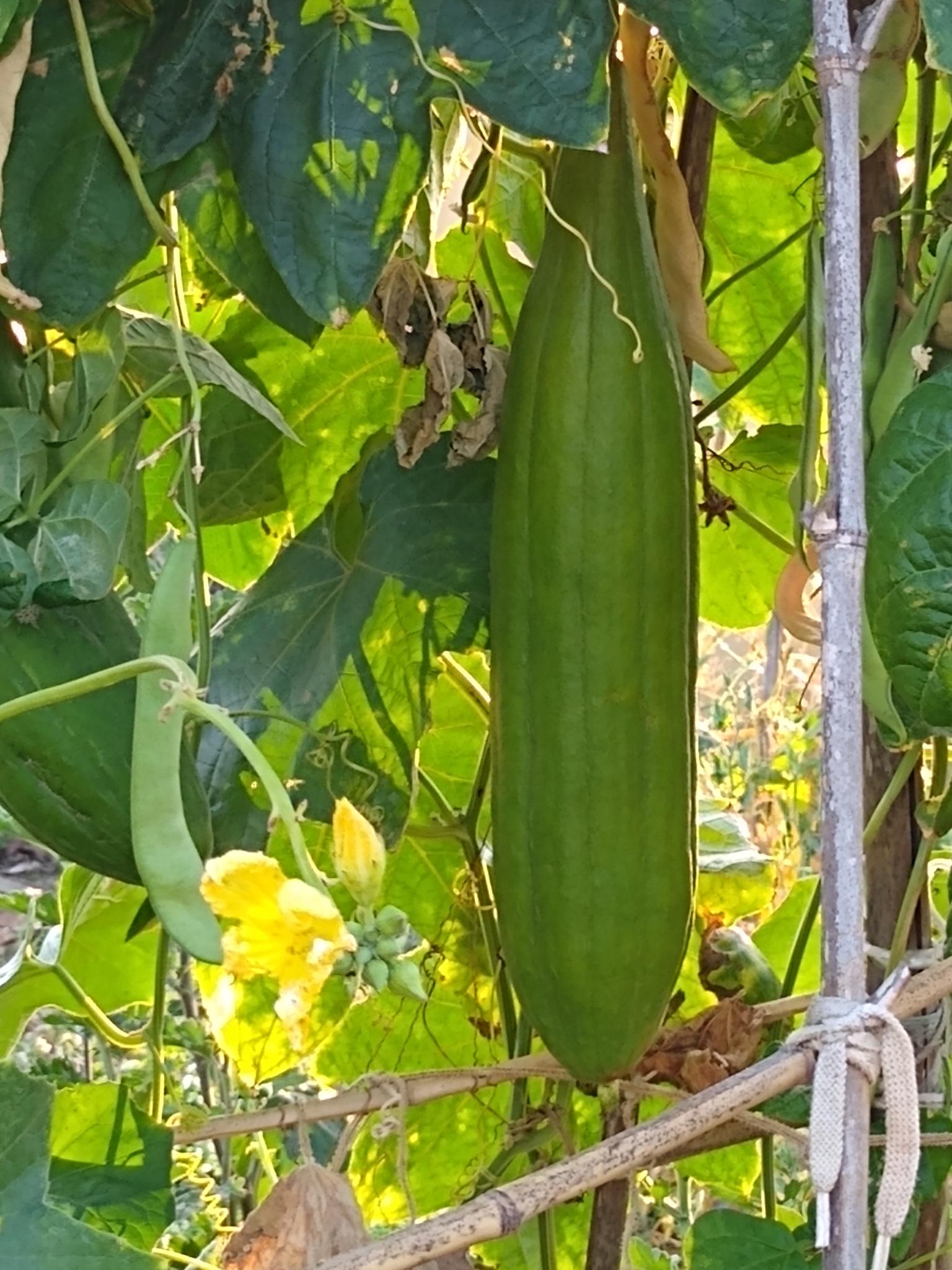 The loofah has a variations of spelling and is a plant that seems to give back time and time again. A member of the cucumber family it grows on a sprawling vine with pretty little yellow male and female flowers that the bees seem to love. The plant grows well in our climate in Majorca needing plenty of sun and warmth. Start seeds off in spring, they can be slow to germinate and watch young plants for snail damage. The fruits can be eaten before they reach about 6 inchs long but quickly become inedible and grow into the familiar sponge that is used in kitchens and bathrooms. To harvest the gourds leave them on the vine until they have turned brown and dry, at this stage they will be easy to peel. Cut them from the vine and give them a vigourous shake to loosen the seeds. Remove one end of the peel and shake the seeds out. These can be saved to plant next year. The loofah can now be peeled. Dry it more in the sun if need be so it doesnt mould. Then you can give them as gifts store them , use them as pan scrubbers or in the shower ...but remember that as with all sponges they can harbour bacteria. Let them dry completely between uses to avoid this and you can also soak the loofah in a weak solution of bleach. If you were sucessful in growing themand have plenty you can just throw them on the compost after a couple of weeks use.

My top tips of the week

· If you have seedlings on the go undercover help them develop a strong root system by taking a soft brush or feather and brush the tops of them to mimic the action of the wind.
· Crushed egg shells, coffee grinds, broken nut shells and thorny branches all make good deterrents for snails but did you know that human or dog hair spread around your plants works too?
· Male urine on the compost heap is a great activator and full of nutrients ; nitrogen, phosphorous and potassium all trace elements that plants need for free!... why male pee..? its less acidic than females.

Home made fertilizer
Weed Tea: Those weeds we are all pulling, like grass clippings they are full of nitrogen. Put them in a 5 gallon bucket, fill it with water and wait a couple of weeks before watering the garden with it.