The seven euros entrance fee doesn't please all tourists. Paula Tamarakza from Poland thinks this is quite a lot to see a cathedral. Nevertheless, she is impressed by the scale and also by how easy the viewing of the interior is. She is interested in the work of architect Antoni Gaudi. Having been to the Sagrada Familia in Barcelona, she wanted to take a look at a different structure to which Gaudi had contributed.

Marco Sontelli from Italy is also taken aback by the size. "It's very beautiful and it is immense compared with many others." Waiting to enter, he was especially looking forward to the colours and religious works to be found inside. Simone Moriniere from France agrees about the size. "It is very big. It is also one of the most beautiful cathedrals I've seen in Europe. Its age is something that has interested me, as also has the relationship between the architecture and the sea environment."

Rene Räkk from Estonia had seen plenty of images of the Cathedral before coming to Majorca. These had made him want to visit. He was not disappointed. "It's very beautiful; very interesting." The entrance price didn't concern him. "It doesn't seem that expensive compared with other attractions on the island."

The number of visitors this year is down somewhat. The technical administrator of the Cathedral, Joan Pastor, puts this down to a shift in the tourism market, i.e. the recovery of competitor destinations. But even if the number has dropped, the daily queues are evidence of the Cathedral's enduring attraction. 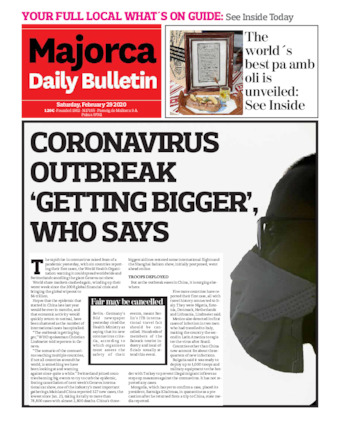