Nina Hossain has been a household name in the United Kingdom for many years as one of ITN/ITV’s lead news presenters and journalists.

In January 2015, she was nominated for the Services to Media Award at the British Muslim Awards, but she is also a popular face in Puerto Soller, which has become her family’s “spiritual home”.

“As soon as we heard of the lockdown and that hotels, businesses, bars and restaurants were being closed, we contacted all our friends out there to wish them our best and to let them know we are thinking of them. It must be very tough for them. It’s such a small port but with so much business dependent on tourism, they must all be fearing for their future,” she told the Bulletin last week.

In a recent interview with her local newspaper, the Huddersfield Examiner (she lives between London and the Midlands where she was born), she was asked “Huddersfield is where the heart is, but if you could be anywhere else right now where would it be?” and she answered: “Puerto Soller in Majorca. The first place I’ll travel to with my family.”

Nina and her family have now been coming to Majorca for the past 12 years. It was love at first sight, although she and her husband Stuart were actually on a recce for a couple of love birds who were thinking of getting married in the port.

“We went out to have a look around for some friends who were planning their wedding. At the time we had a two-year-old and a nine-month-old and it was our first real holiday after a few years of being pregnant, working, juggling nappies etc. and we were looking forward to a break," she says.

“We arrived late at the Hotel Esplendido right on the sea front. It was around 10pm. We got to our superb room, opened the window and just gazed in awe at the wonderful view, we were overwhelmed. It was the first time since the kids were born that we had time to relax and rediscover normal life, and there we were in Puerto Soller and it felt wonderful. It was stunning and we decided at that moment we had to come back and we have been ever since, two or three times a year. And over the years, we’ve met other families, in fact there are now three of us who try to meet at least once a year and catch up in the port," says Nina. 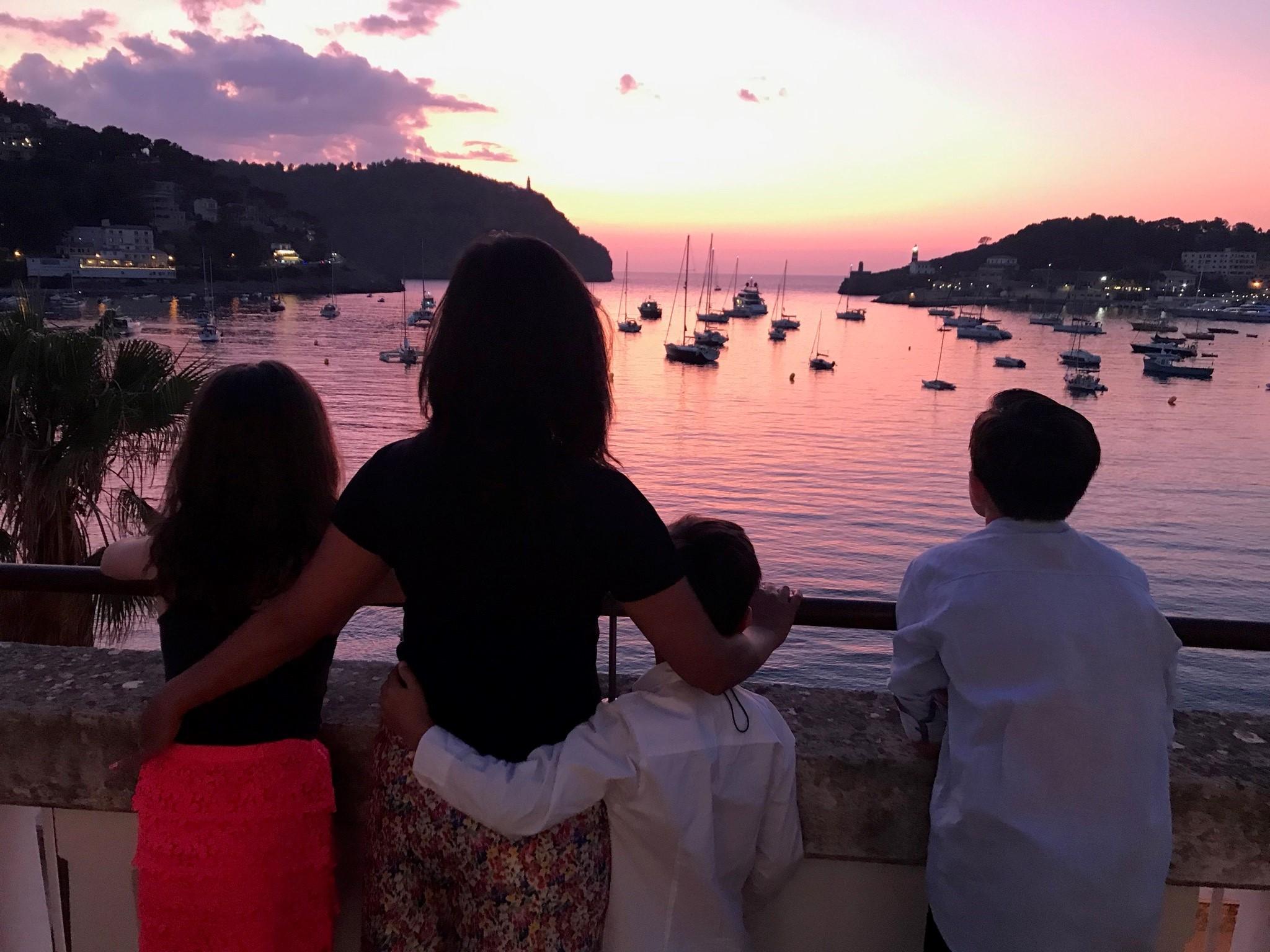 “Over the years we’ve stayed at other hotels in the port and sometimes come by boat via Ibiza, but it’s always the port and it’s now always the Hotel Esplendido. It feels like home. I know it’s a big hotel, but many of the staff have been there for years and treat you like VIPs, all the guests are treated the same. The attention is first class, it’s so comfortable and we feel like we’re the only people in the hotel. As soon as you walk in the door, you’re made to feel so special and now, with three kids, it’s home for all the family. And, of course, over the years we’ve made so many friends in the port, in the bars, restaurants and shops, and we immediately sent them all our best wishes as soon as we heard about the lockdown," she tells me.

“My husband and a friend of his are always following developments in Majorca via your website. Tourism is their lifeline and they make most of their money between April and October or November. It’s going to be very hard for local businesses," she says.

“I have to admit that some six weeks ago, when the lockdown came into force, our first thoughts were ‘what about Soller this year?’ but it didn’t take long for the severity of the whole situation to set in, especially once the virus had broken out here in the UK so suddenly. One begins to set out new priorities, be reasonable and rationalise things," admits Nina.

“Right now, we’re not seeing an end game, no one is, and if we can’t make it to Soller this year, so be it. There’s plenty of time in the future and Soller will always be there. My immediate thoughts were about the family, my elderly mother who I know is safe and being well cared for, so that’s a weight off my shoulders, although it may be a while before I see her again.

“Right now we’re dealing, or trying to deal, with something which is not going to disappear over night and my life has also been turned upside down. As part of an important public service provider, for the first time in my life I’ve put my job first. We’ve rescheduled many programmes and news bulletins on ITV and I am now anchoring a coronavirus Q&A programme every Monday night which offers the general public the chance to put their questions to the politicians and members of the government in control whilst also sharing their experiences and stories.

“The daily media briefings from the government are all well and good, but the journalists are always the same. They’re all from the Westminster bubble, so my programme opens up the debate to the general public. I guess, in a way, it’s a platform for the public to have a ‘shout out’ and the volume of questions we’re getting is immense. The public still have so many questions, doubts and fears. This is effecting everybody in one way or another. I’m talking to you now as I enjoy a short walk, my daily exercise. But who knows, perhaps this time next week, we’ll be confined to home. People want clarity about their financing, mortgage holidays, when the unemployed or self-employed will receive the government aid; there is a sense of frustration.

“I’ve covered some very horrifying and harrowing events during my career to date. The July 2005 London bombings and the subsequent terror attacks, then came the Manchester bombing, which was heartbreaking, and the Grenfell Tower fire. We were like ‘can things get any worse’? Yes they can and they have. It’s devastating, perhaps even more than world wars. I don’t think the true impact has hit the UKor the world in general. It will never be the same again after this and here in the UK, we have not peaked yet.

“But I’ve gone military. I take my job and the responsibility that goes with it extremely seriously and it’s not just what’s happening right now that concerns me and many of my colleagues, it’s what’s going to happen afterwards. It’s going to be similar to the post-war period, the horror stories will go on for years, generations.

“Only this week I’ve been working on two stories. One is a woman who is about to give birth for the first time, the other is another mother who is stage four cancer and expecting her third child. She’s lost all contact with her medical and support team with all the focus on Covid-19 patients and she is terrified.

“We had to cover the story of the 13-year-old who died at the hands of the virus. He was buried alone with no family members present; he had been separated from them and was unable to see them before he passed away."

Just how do you deal with that?

“It’s a tough gig. It can be extremely emotional at times but I, and many of my colleagues on the news bulletins and programmes, have a public duty and that is to get the message out while giving the public a voice. The fallout is going to be another challenge for us to overcome by working together. Mental health, related health problems, mobility issues plus the shock of it all.

“This Easter Bank Holiday is the big test for the UK and how the country is responding to the advice. I just hope the majority of people see sense and do what they are told. We’re in this for the long term, but at least we’ve got Soller to always look forward to."

“My best wishes and love to you all in Majorca.”