Real Mallorca’s pursuit of La Liga survival gained further momentum on Monday night in a game of high drama when they defeated European-chasing At. Bilbao 3-2 with an 87th minute unfortunate own goal from Spanish international keeper Unai Simon.

This was the first time we’d beaten At. Bilbao since 2011 (under Michael Laudrup’s tutelage) and our first back-to-back win for two years. Coming into the game on the back of a vital 2-1 victory over fellow strugglers Cadiz last weekend, we found it heavy going early doors, hardly getting over the halfway line.

After getting a boot-hold back in the game, we nearly conceded a crazy goal when our goalkeeper Sergio Rico shanked a clearance straight to Bilbao’s Sancet who fed ace goal scorer Raul Garcia but his inventive back-heeler went wide.

Mallorca kept plugging away and in the 22nd our efforts were rewarded. Bilbao’s Unai Nuñez clumsily tripped Pablo Maffeo in the box and the old warhorse (Salva Sevilla – 37 !) confidently hammered home the resultant penalty, 1-0. Buoyed by the first goal, Mallorca went for the Basque jugular and on the half-hour mark we doubled our lead. Vedat Muriqi (who played a blinder) flicked a high ball into the Bilbao box and Angel raced through to guide the ball home, 2-0 at half time.

Clearly unhappy with his team’s performance, Bilbao’s coach Marcelino brought on Berenguer and Berchiche in the hope of pulling back the deficit and the changes quickly had the desired effect. Berchiche set up Garcia to score, 2-1, and Berenguer completed the remarkable two-minute turnaround by bundling in Muniain’s corner from close range, 2-2 – the 13,000 crowd were stunned as the game looked to be slipping from our grasp.

With time ticking away, Mallorca refused to give up and fought like men possessed. Muriqi was causing havoc in the Bilbao penalty area and his input on the result of the game was immense. 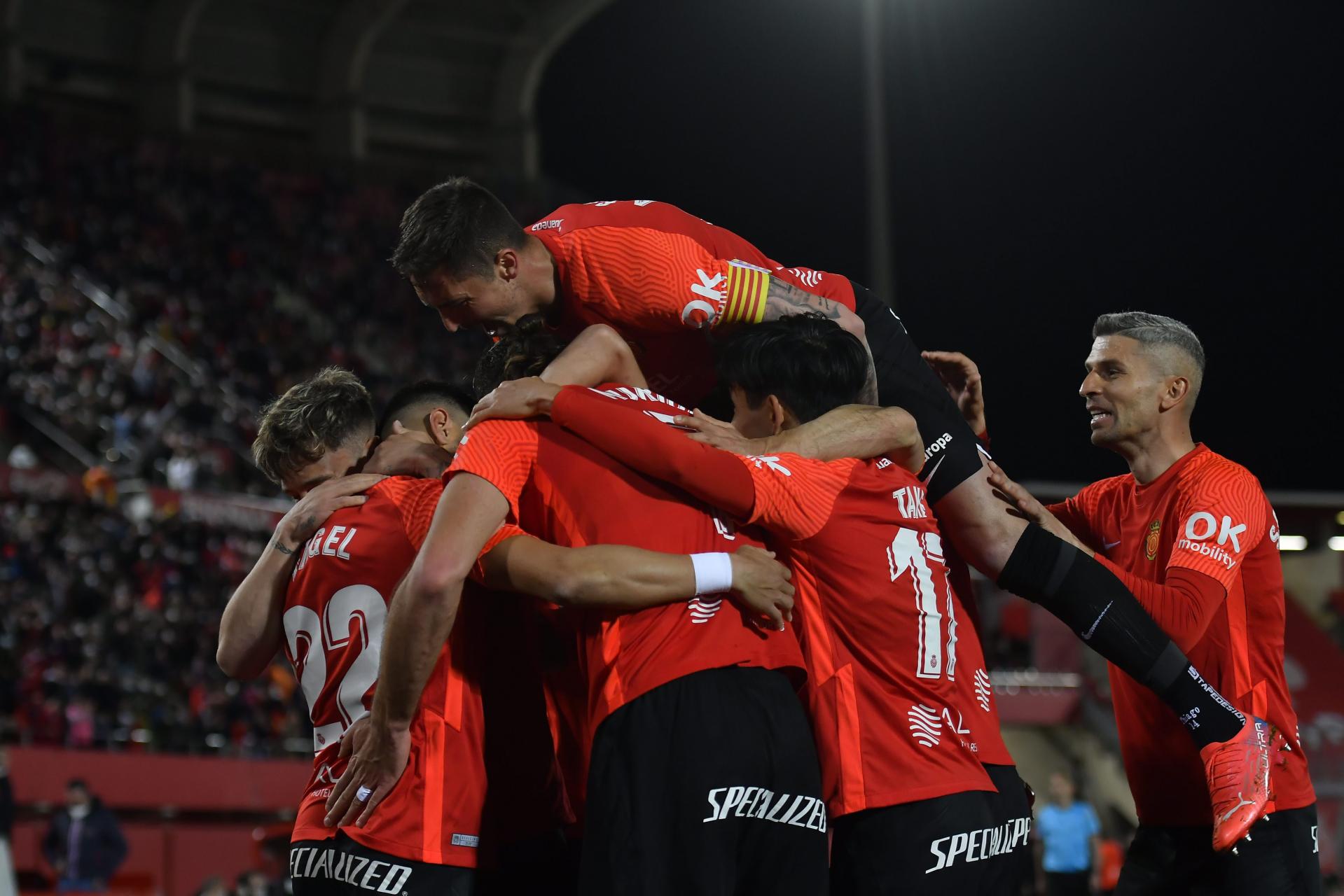 In this topsy turvy encounter there just had to be a final twist and with two of the added-on seven minutes left, with the result looking to be a share of the spoils, we went on the attack. Dani Rodriguez (who had a quite magnificent game) took a Take Kubo pass and squeezed it into the penalty area. In what can only be described as a melee, Kubo fired in a shot which hit the post before going into the net off Unai Simon’s back for an own goal and a famous victory – the Son Moix erupted, 3-2.

SUMMING UP : Our supporters on Monday night very much helped RCD Mallorca over the line with a FAN-DABI-DOZI vociferous display. Mallorca achieved a vital victory with all the suspense in the world in a crazy, exhilarating game of football, spoilt at times by a shocking referee who made at least two glaring mistakes.

Monday night’s win sees Mallorca now six points away from relegation with a game in hand and, what is more important, the team believe in themselves again and look strong at home.

Our boys, to a man, were brilliant, with Dani Rodriguez playing a major role in the win.

One of the reasons for our improvement is that coach Luis Garcia Plaza has adopted a 4-4-2 playing style with Angel playing off Vedat Muriqi upfront. Muriqi has conquered the Son Moix stadium and with his input the team takes on another dimension. Our winning goal is all down to him, he forced the initial corner which finished off at the feet of Kubo, whose shot hit the post and ended up in the net after bouncing off the Bilbao goalkeeper’s back.

Not even in our wildest dreams could Mallorca fans imagine that after half an hour we’d be two goals up. To assess the feat of Luis Garcia Plaza’s team, Bilbao, for the first time this season, conceded more than one goal on the road.

This was a memorable win for Real Mallorca and the scenes of jubilation at the end were fully justified and it was great entertainment, but not for the faint hearted ! Next up we’re away at third-top Betis on Sunday at 18:30.