Aromata: Haute Cuisine with the best products from Mallorca

In the centre of Palma, inside an old 17th century Mallorcan manor house you’ll find the Aromata Restaurant. It is located in Calle Concepción number 12. The building is part of Mallorca's heritage. It is the second restaurant of the award-winning Mallorcan chef Andreu Genestra (1 star and 1 green star in the Michelin Guide). "We were looking for a link between the past and the present, a word that would define our cuisine, and looking for spices we found AROMATA, which is Latin for spices," says Andreu Genestra. 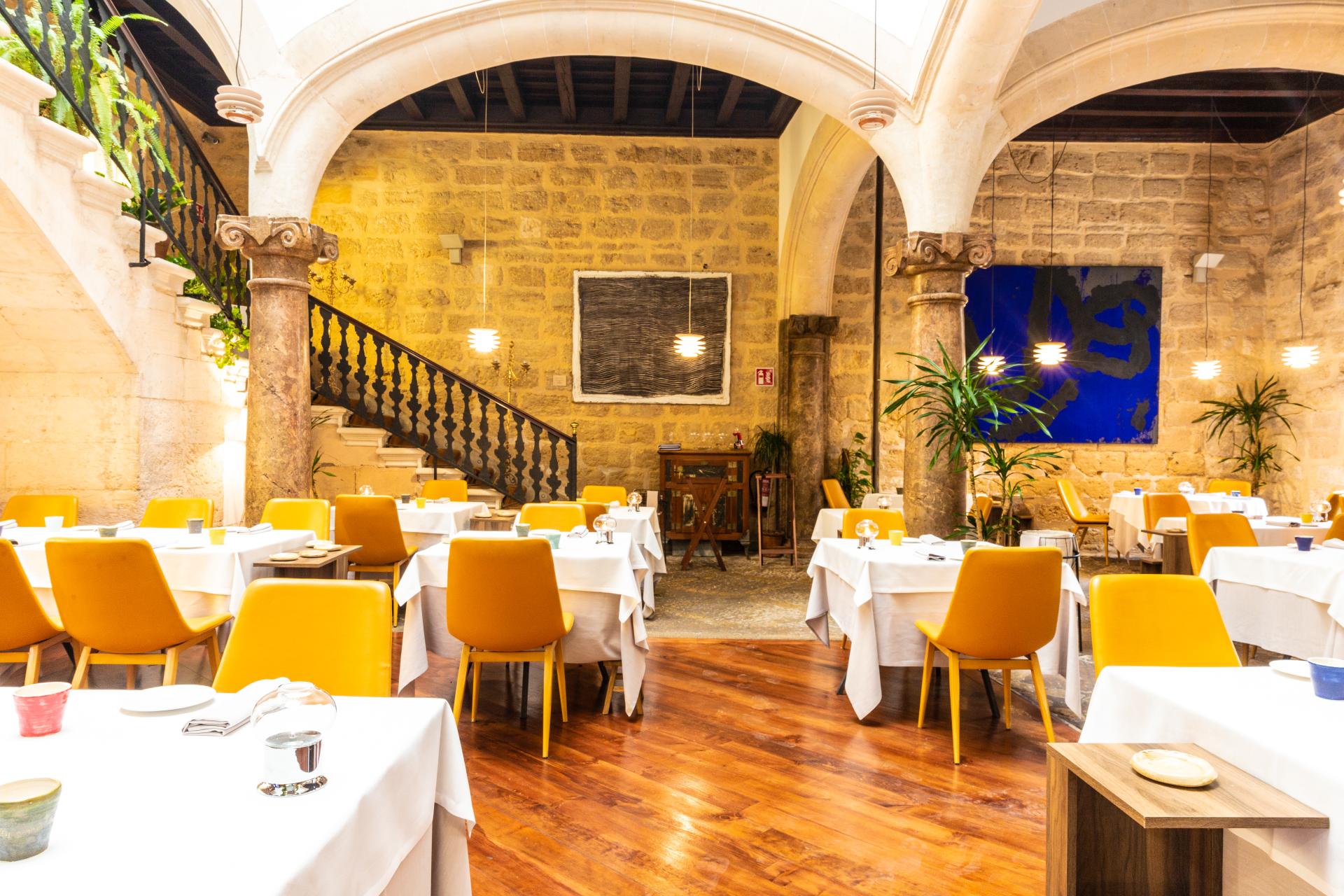 Aromata is a journey through the cuisine that Andreu Genestra and his team have been preparing for more than 20 years with chef Rodrigo Vallejo and headwaiter Marta Pellicer at the helm. Aromata is synonymous with local produce, sea, land, game, fishing, mushrooms, seafood and local vegetables. "Our cuisine has a special alchemy with the product. We apply a technique to praise and respect it in all our preparations," says Vallejo. "At Aromata you can find everything from stews and salads to the most select products such as Mallorcan porc negre or red tuna," says Genestra. In fact, chef Rodrigo Vallejo has been selected among the 6 finalists to participate in the final of the Balfegó Tuna Chef Award competition. This is one of the most important gastronomic competitions in Europe that rewards the best works made with bluefin tuna. 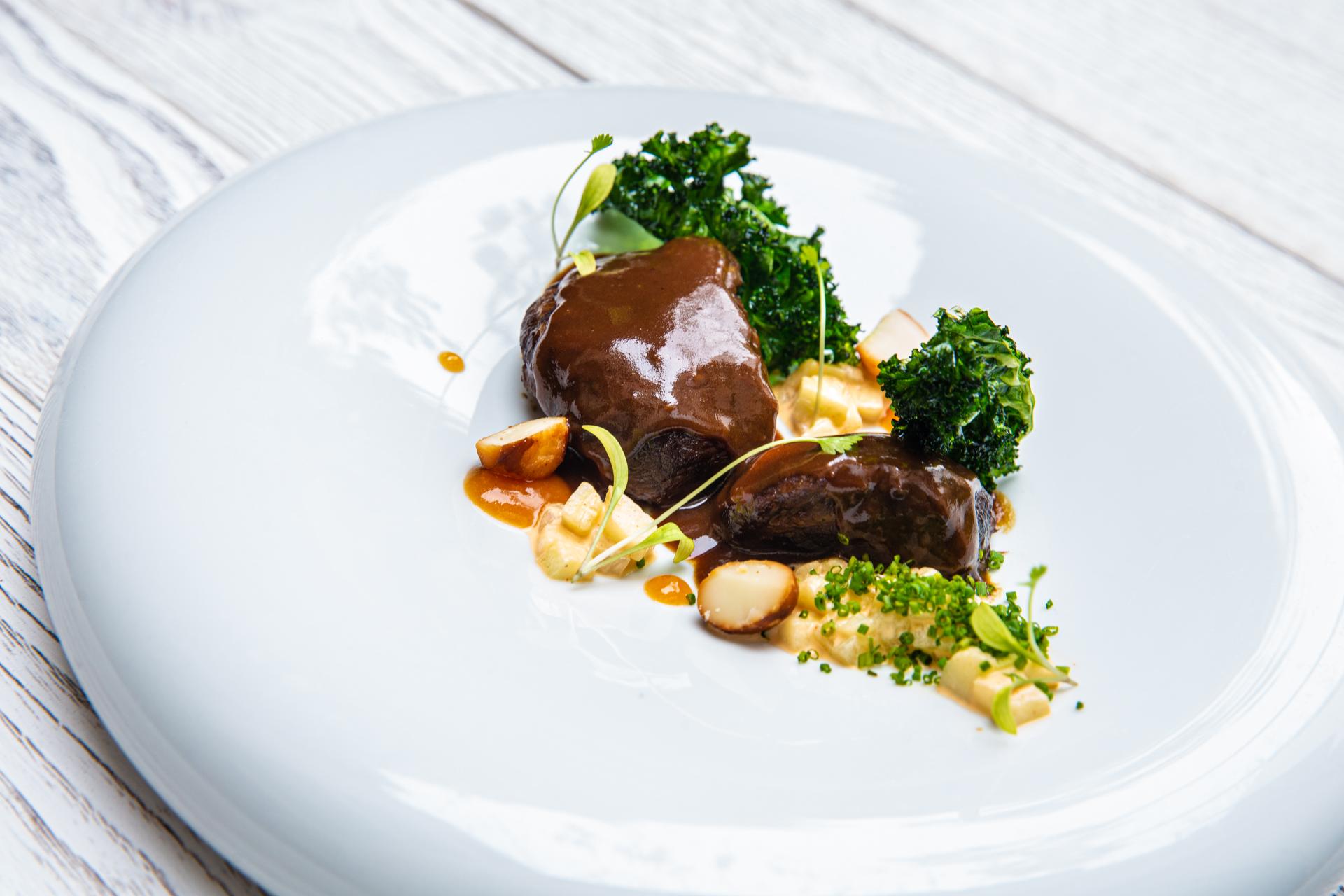 At Aromata, diners can discover the most characteristic flavours of Mallorca and the rest of Spain. This can be done through the dishes and also through the wines. More than 200 varieties make up the wine list of this restaurant where you can find Mallorcan, national and international wines, as well as cavas, champagnes and homemade liqueurs, such as vermouth, gin and cognac. Aromata is a Ruinard restaurant. It has been one of the few restaurants chosen in Spain by the prestigious French champagne house. This distinction allows it to have selected bottles that can be found in few restaurants. Aromata's cuisine is constantly changing as well as the variety of wines that are adapted to match the dishes. 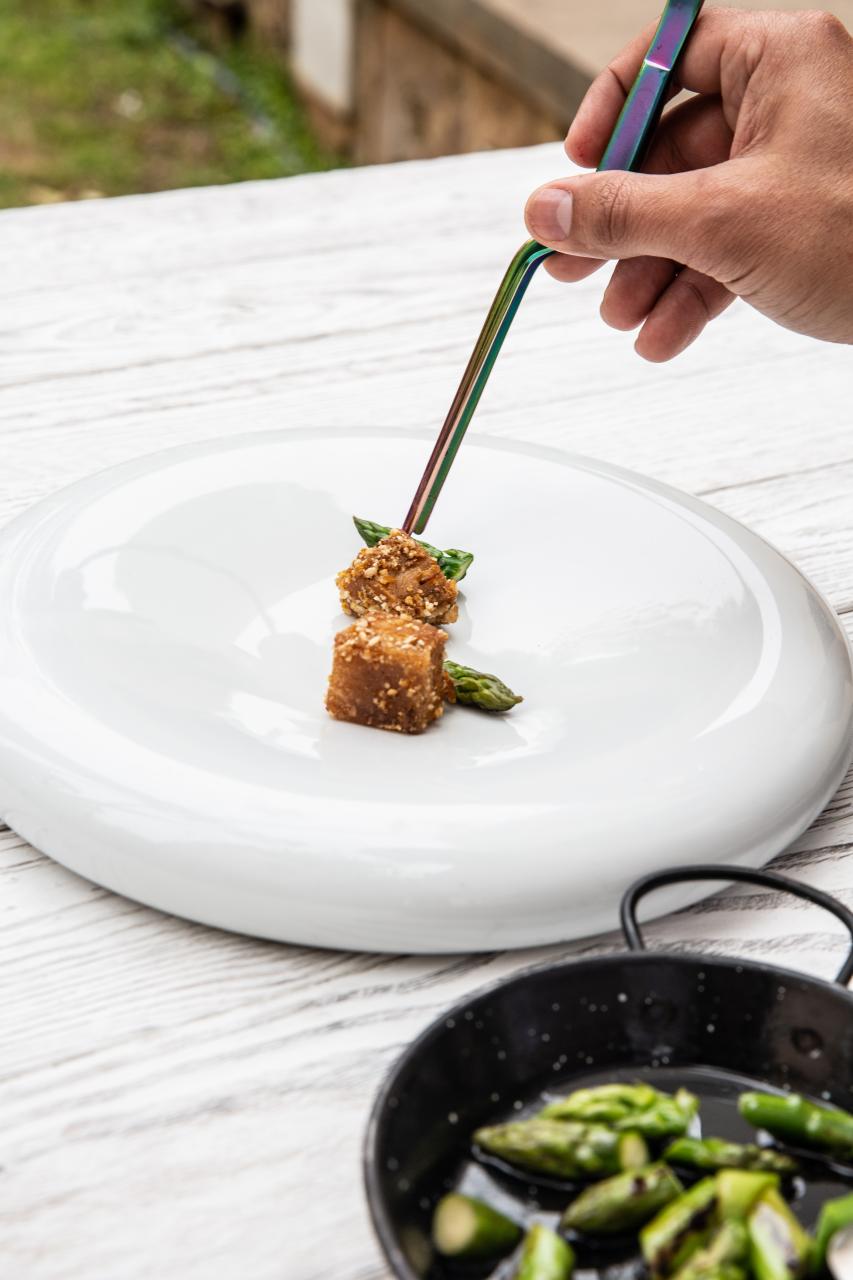 Aromata offers a very personal and detailed service with dishes that are finished in front of the customer. "The crockery, glassware and table linen are custom-made and handcrafted to suit the service and each dish. We offer a complete experience not only through flavours but also with an attentive, professional and very personal service", says the head waiter, Marta Pellicer. 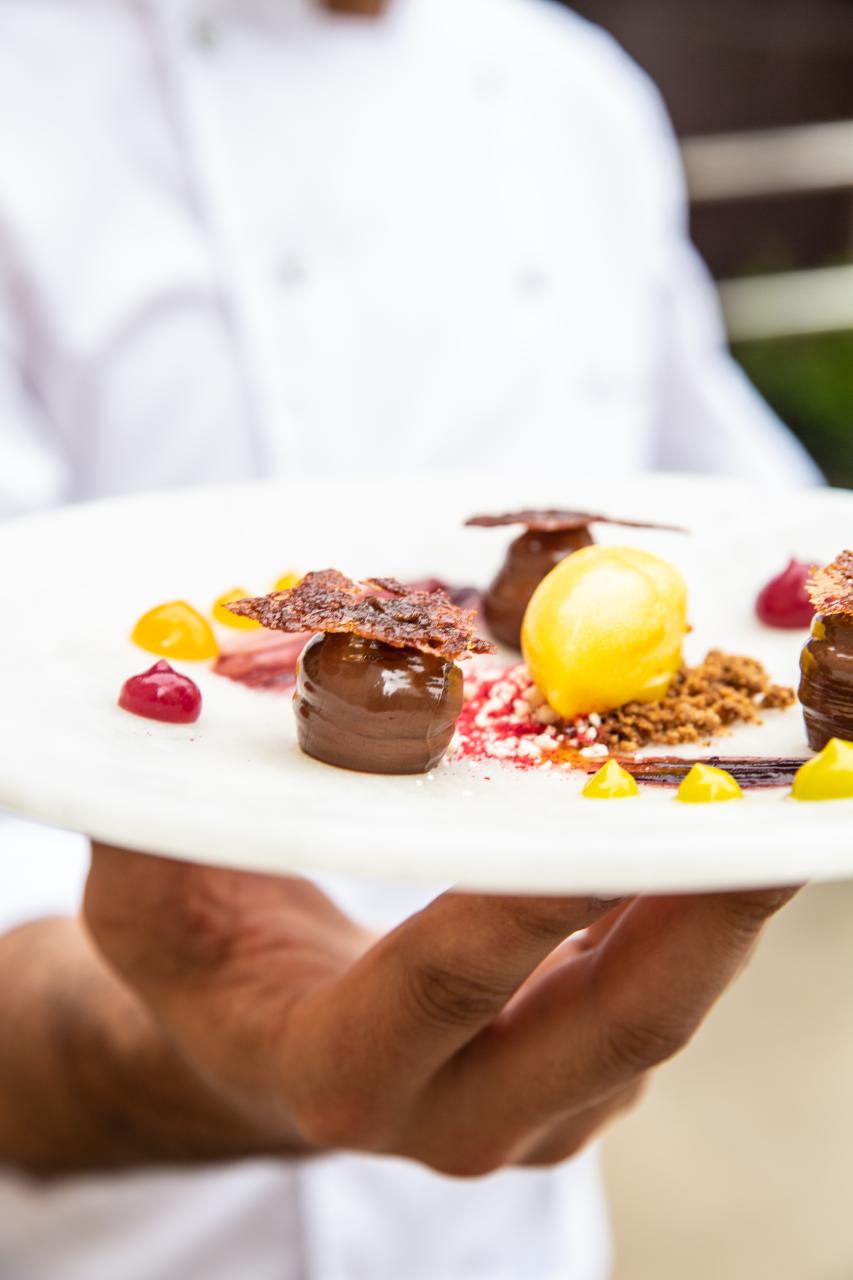 Aromata can be discovered at lunchtime or in the evening. At lunchtime with a gastronomic offer that changes every 15 days, with fresh and very Mediterranean dishes and with a historic dining room, in the courtyard of the manor house that the restaurant occupies. "We want to bring haute cuisine closer to everyone. This is our aim. That is why every lunchtime we offer a menu where the raw material is the most important thing. With the product we can travel all over the island", says Genestra. At night, the atmosphere changes and becomes much more sophisticated and elegant. During the spring, summer and early autumn, customers can enjoy the new proposals in the garden, surrounded by emblematic buildings and a quiet and unique atmosphere. 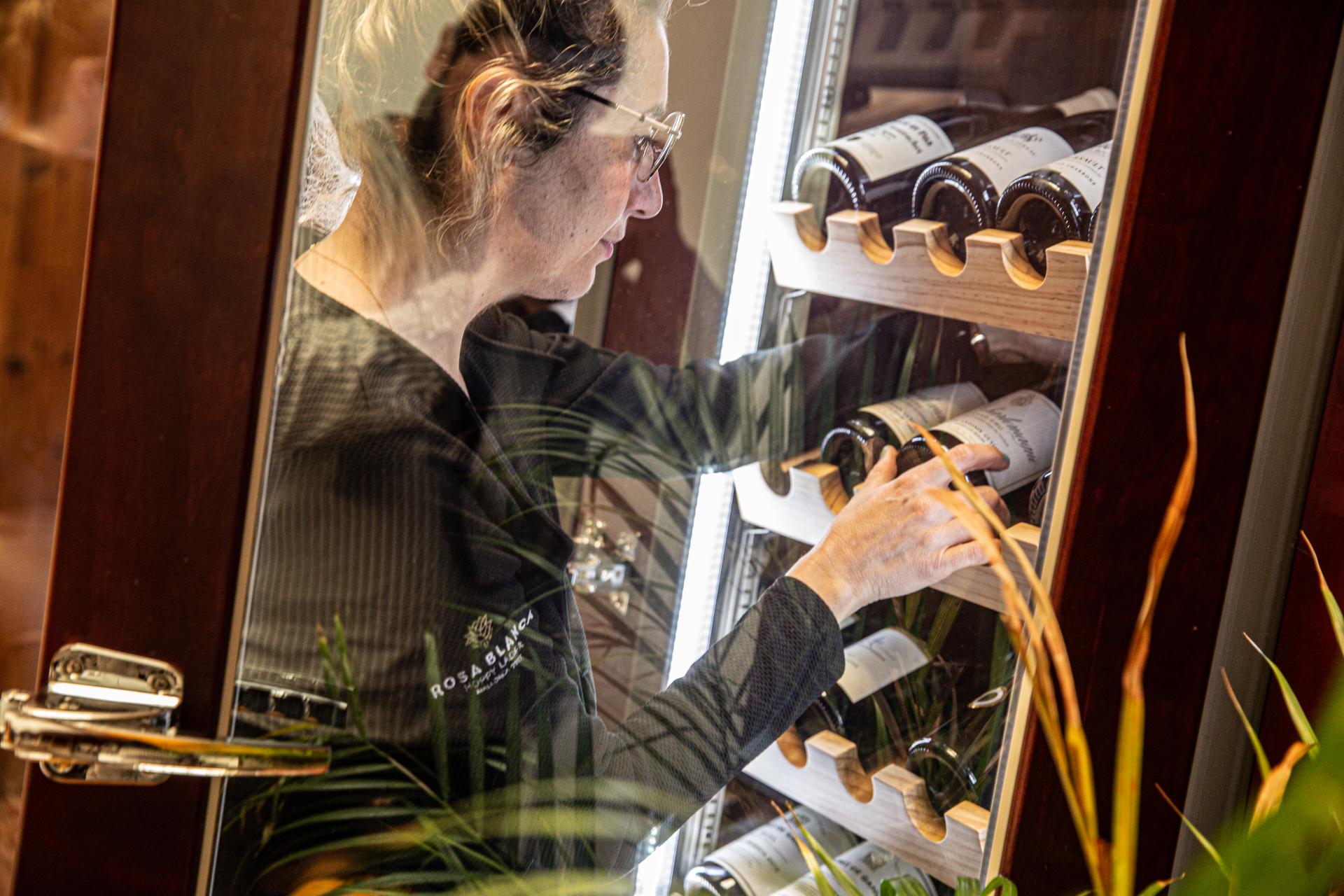 The Aromata restaurant has been awarded 1 sun by the Repsol Guide and is one of the Michelin Guide's top restaurants. Open from Tuesday to Saturday from 1 p.m. to 3.30 p.m. and from 7.30 p.m. to 10 p.m. It is essential to book in advance via the website www.aromatarestaurant.com or by calling 971-495833. 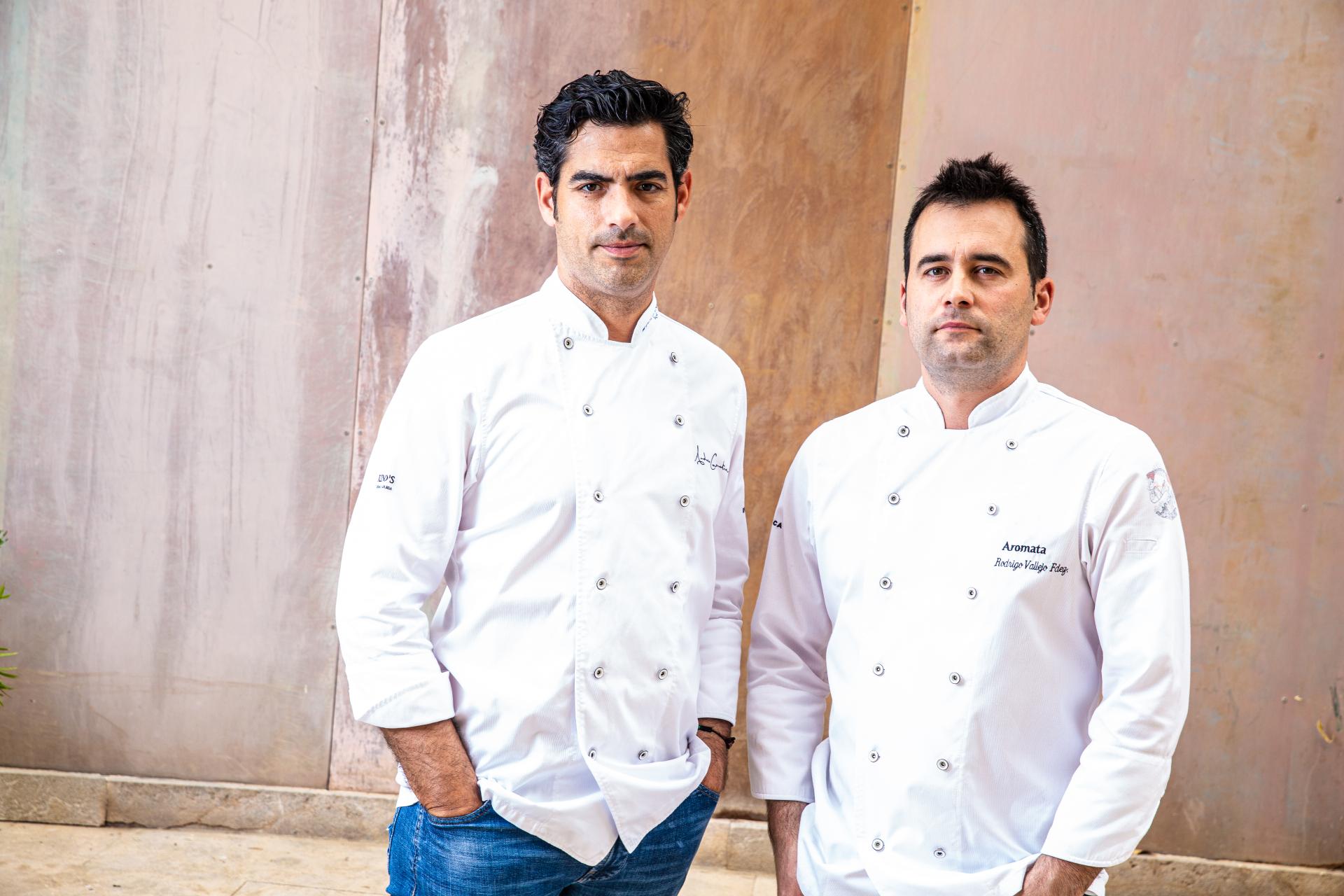 He began his career in the kitchen washing pots and pans in a sun and beach hotel when he was only 15 years old. At the age of 16 he started studying at the Hotel and Catering School of the UIB and then went on to work in luxury hotels on the island. At 19 he travelled to Barcelona where he found a job at the Condes de Barcelona hotel for a year. He returned to the island to work under the orders of Marc Fosh at the Read's hotel where he learnt the basics of cooking. He continued at the Son Brull hotel where he acquired the vision of the select Mallorcan cuisine. The Basque Country was always his dream and at the age of 21 he did a stage at Mugaritz and at Juan Mari Arzak's restaurant, both of which have had a great influence on his career. Back in Barcelona, the restaurant Espai&Sucre brought him creativity in the world of desserts and he learned from one of his favourite masters, Jean Louis Neichel.

In 2008 he landed at Ferrán Adriá's El Bulli for the whole season and part of the 2009 season, hence his desire to improve day by day, based on his experience at the restaurant in Cala Montjoi. His first position as head chef came from the reins of the restaurant El Pi at Barceló Formentor for 3 seasons.

In the winter seasons he was cooking in places such as London, Stockholm, Brazil, Moscow, Paris and Miami, although it was in Kuwait after working in the Royal Family's catering business that he realised it was time to start a new stage in his life.

Satiated with foreign experience, in April 2011 he decided to open his own restaurant, Andreu Genestra in the hotel Son Jaumell in Capdepera, Mallorca.

With a lot of hard work and sacrifice, after 3 years the Michelin guide awarded him a star and the Repsol guide recognised him with two Soles. Once the first project was consolidated, he decided to open his second restaurant, this time in Palma: Aromata. Over time it has become a gastronomic reference in the Balearic capital.