The Christmas festivities last for 12 days but every Briton and American I know restricts the culinary merry-making to only four — Christmas Eve, Christmas Day, New Year’s Eve and New Year’s Day.

Anyone wanting to celebrate Christmas as they did in Jane Austen’s time would have another eight days of festive cooking to think about.

We all have traditional dishes we eat on the big four days of Christmas and those who have to prepare the festive meals know it’s a mammoth amount of work. So who wants another eight days of grind in the kitchen?

Well, for those who celebrate the full 12 days of Christmas, there’s no hard slog involved. The wise ones who eat something special on those other eight days keep it simple.
They seldom prepare a full festive meal, preferring instead to cook one special dish — and it needn’t even be a main course. It could be a simple, little starter that happens to be a big treat.

It could also be something rather grand that doesn’t need any cooking, such as a platter of French oysters that can be opened with a flick of the hand — assuming one of the diners has learned the knack of opening oysters.

Most nations make a huge gastronomic mistake at Christmas: they try to cram too much into Christmas Day lunch or dinner and the meal becomes an assault course to be endured rather than enjoyed. These meals would be much more enjoyable if they were a good deal lighter and if the festive goodies were spread out over several days. Although I have always had a good appetite I never serve a dessert on Christmas Day. But in most other households you get plum pud, mincemeat tarts, nuts, glacé fruits, chocolates and a long etcetera — including a selection of turrón, Spain’s famous Christmas nougat.

How is it possible to enjoy Christmas pudding and mincemeat tarts following the vast amounts of food that have been eaten beforehand? I wouldn’t know, because I have never even attempted to eat pud or tarts after the usual Christmas feast.

Instead, I keep them for the other eight days of Christmas — and even then I never have them as part of a meal. During the festive season, mincemeat tarts add an epicurean touch to my breakfasts, or I have them with a cup of tea in the afternoon. 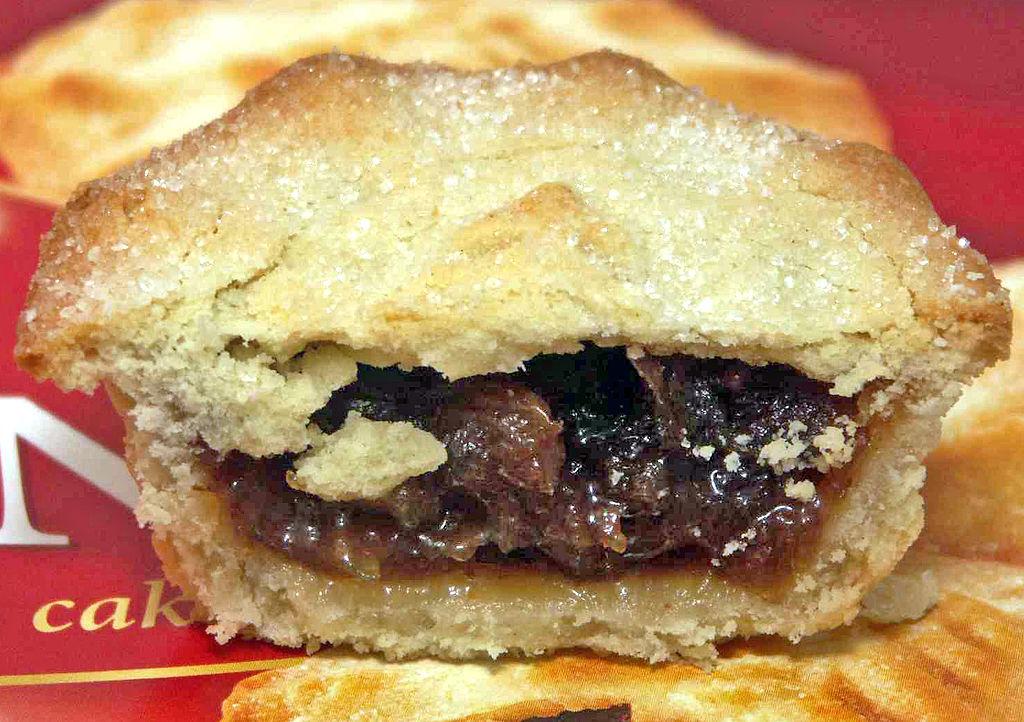 Mincemeat tarts are at their best when we are feeling peckish, not after a gargantuan roast turkey meal with two kinds of potatoes and several veggies.

Instead of forcing plum pudding into an overloaded and overworked digestive system, keep it for another day and have it after a light lunch. That’s when you’ll best appreciate this superb English steamed pudding. When dessert is as rich as this, with custard or rum butter, the other dishes must be light.

The most enjoyable Christmas puddings I have ever had were those eaten outside of mealtimes, such as late afternoon. And there have been several occasions when Christmas pudding, long after the festive lunch, became a solitary supper dish with a glass or two of Veritas Dolç, the sweet moscatel wine of the José L. Ferrer bodega in Binissalem. 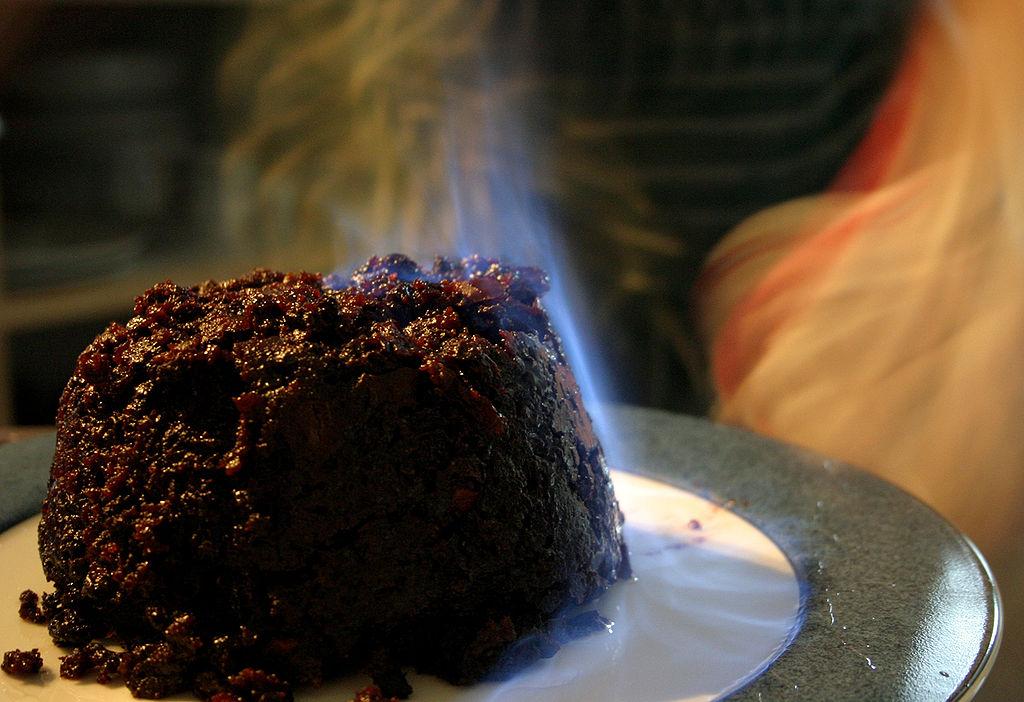 You can also make a case for having some of the Christmas treats before December 25. A Majorcan friend always maintains that the best homemade turrón of the year are those his mother serves on All Saints’ Day — which is on November 1.

We should consider doing something similar with mincemeat tarts and plum pud. It’s unorthodox — but so were history’s greatest geniuses.

Except for the wealthy, the Christmas festivities are always a bit of a drain on the household budget, so it is essential that some of the dishes for the other eight days of Christmas are economical as well as being easy to cook.

Even at this time of year, it’s still possible to find ingredients for interesting festive dishes that are well within most people’s Christmas budget. When everyone else is buying fish and shellfish at sometimes astronomical prices, we can make a superb and relatively cheap light main course with the big sardine fillets that are always available at El Corte Inglés in Jaime III — and also in the Avenidas, but it’s the Jaime III store I go to because it’s nearer.
These are fillets from large Galician sardines and they are ideal for doing with a thick oatmeal coating, a traditional Scottish way of frying herrings.

They are priced at less than €10 a kilo and three, a nice portion for a mains, cost around €1.60. Sprinkle the fleshy side of each fillet with a little salt and pepper. Using your fingertips, rub together 200 grs of oatmeal (the one at Mercadona is a good buy) and two tablespoons of Dijon mustard plus salt and pepper to taste, until well combined.

Coat the fleshy side of each sardine with flour, dip it in beaten egg and then in the oatmeal. Press the oats well into the flesh to form a thick crust. Fry the fillets in butter over a medium heat until they are golden and fry for another minute on the skin side. If you have any extra oatmeal fry it in the same pan until golden and crisp and transfer to a plate.

Serve the sardine fillets with plain boiled Majorcan patató, the small potatoes available at most supermarkets, and a lettuce and tomato salad sprinkled with some of the crisp fried oatmeal. Fillets of mackerel are also delicious with an oatmeal coating.

An ideal bird for one of the 12 days of Christmas is quail: it’s economical, easy to cook and quite succulent when properly grilled or fried. All quail these days are farmed so you can buy them in any supermarket, either whole or spatchcocked. The latter are ready for use but the whole ones usually need to be cleaned — which is easily done by inserting a small spoon, giving it a couple of twists and extracting the innards. 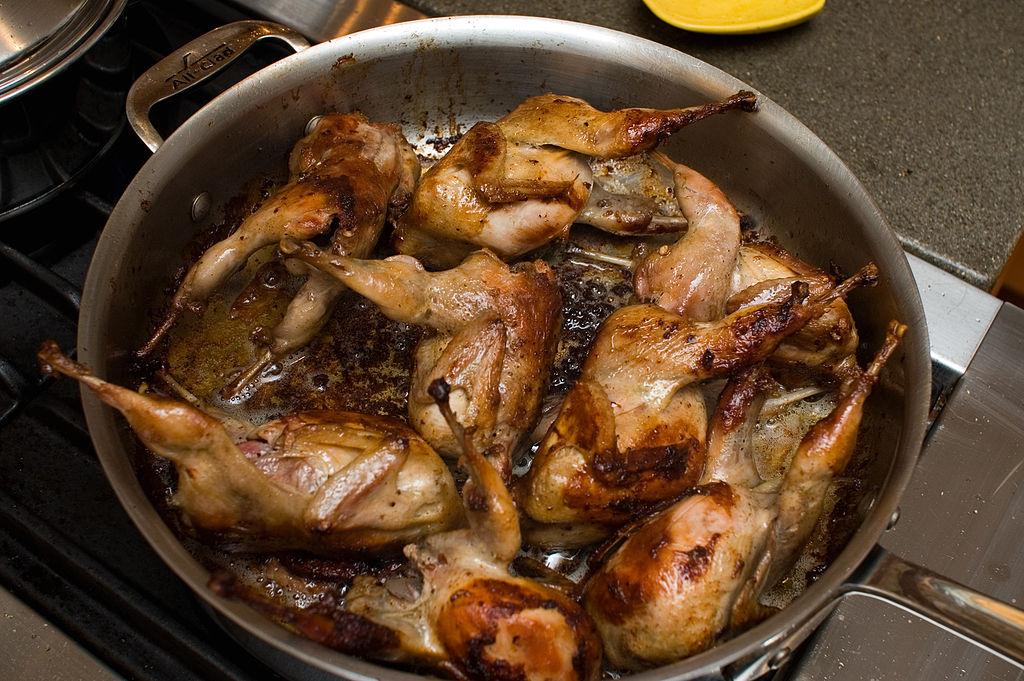 The butterflied quail are ideal for grilling or frying and either way they call for short cooking times. Before grilling butterflied quail sprinkle the surface with herbs of your choice plus a little finely chopped garlic, if you like it.

When quail are served with a nice mix of salad greens they make a delightful starter and become a main course with potatoes and vegetables.

When my friend Jeff Flood was young, Christmas Day breakfast at his home in Texas was fried or roasted whole quail served with biscuits — which is what Britons would call scones.
The quail, one per person, also came with gravy made with a flour and butter roux, milk and chicken stock, plus salt and pepper to taste. The gravy was poured over the quail and the biscuits and Christmas day got off to a good start. In Jeff’s youth the quail were wild, so they were bigger and had a distinctive gamey taste.

An excellent main course, perhaps for lunch on New Year’s Day, is a simple pan-fried fillet of pork with an orange and fresh ginger sauce and a selection of mashed veggies.
A pork fillet is always thick at one end and thinner at the other. Slice it in two so that each piece is of a similar thickness.

Sauté the thick piece in a mixture of butter and olive oil and over a moderate heat, turning it to brown on all sides. Six minutes later add the thinner fillet to the frying pan.
When the thick piece has sautéed for another five minutes or so, cut off a very thin slice. If it has a nice tinge of pinkness at the centre it is ready. Do the same with the other piece of fillet. Take them out of the frying pan and keep them covered.

Add a couple of tablespoons of finely chopped fresh ginger to the frying pan and stir it around for a couple of minutes before pouring in the juice of three medium sized oranges and their pulp. Stir over a moderate heat until the sauce thickens slightly.
Cut the pork into thickish slices and place them in the frying pan to heat through a little. Serve with two or three mashed veggies such as potato, yams, pumpkin, broccoli, fresh peas, cauliflower, parsnips, celeriac, turnips or carrots.

Those goodies that rate as a special treat during the other eight days of Christmas depend very much on what we were used to (or lacked) in childhood.

An English friend who was a child in the 1950s loves jam, but never got enough of it in those days of rationing and shortages of all things edible. His big Christmas treat nowadays is to go to Harrods and Fortnum and Mason at the beginning of December and buy the most exotic and most expensive jams he can find.

Another friend, who came from a home that never lacked the basics but seldom had any luxuries, even at Christmas, gets mail order specials for the whole month of December.
He times it so that every Thursday or Friday he receives a batch of the finest smoked salmon from a small producer in Scotland, the best Whitstable oysters or a foie gras from Perigord.

Another Majorcan friend gets his Christmas kicks by ordering from El Corte Inglés an Iberian cured ham from Huelva. It’s an expensive item but it lasts until well into the New Year and he gets a great deal of pleasure out of slicing it as well as eating it. He’s been doing it for so long he’s now an expert slicer and can cut the ham as thinly as tissue paper.
From what I have said so far, two things are immediately obvious: it seems to be men who go in for Christmas treats and that these extra-special goodies need no cooking or elaborate preparation.

But there is no reason why women shouldn’t get in on the act. They, more than the male of the household, need that particular little treat (or not so little) at this busy time of year.
It is usually the woman of the house who organises the cards, the presents, and all the extra shopping involved, sometimes right up to Christmas Eve. And she is sometimes baking a cake, doing her own Christmas pudding or mincemeat tarts — plus all her usual everyday chores.

But women, perhaps because they are more conscious of what everything costs, seem more reluctant than the men to splash out on something special. Christmas treats are often quite expensive because they are not something we eat or drink during the rest of the year.

But don’t let the extra expense of these little luxuries put you off. If there’s something you think would constitute a special treat for you and the rest of the family (or just you) then buy it.

Treating ourselves and others is one of the great delights of Christmas. It’s so satisfying I think we should make an effort to have little luxuries all year round. The best treats are often those that happen once a week — 52 weeks of the year. A treat every week — that could be a resolution for the start of 2020.