Shakespeare wrote: “What’s in a name? That which we call a rose by any other name would smell as sweet.” The Bard hit it on the nail — but what he said isn’t true when you’re trying to sell something.

The English have always been good at putting new labels on fish with unattractive names. A name like dogfish or catfish can be a bit distasteful for many shoppers, especially those who have dogs or cats as pets. But change the name to rock salmon and the fish suddenly has lots of meal appeal and housewives add it to their repertoire of family dishes.

The same has happened to a flat fish commonly known as megrim, sail-flake or whiff that is caught off the west coast of Scotland and the southwest coast of England, as well as in Majorcan waters.

By any of these three names, the fish was never very popular in England or Scotland. But because it is a flat fish and a sole look-alike, someone had the bright idea of renaming it megrim sole — and housewives were suddenly buying it.

It helped that top cooks liked its low price and sustainability and put in on their menus. Fish specialist and TV celebrity cook Richard Stein mentions it in his English Seafood Cookery, one of the best fish cookbooks I’ve ever read.

Stein writes: “Though they look a bit anaemic, megrim sole are not a bad buy, being cheap and well-flavoured, if a little dry. We have served them with beurre blanc to quite a good response.”

Megrim sole is widely fished in Majorcan waters and is very much available at Palma’s Mercat d’Olivar, the Santa Catalina market at Calle Aníbal and in supermarkets with fish counters. But I goes under a variety of names which are sometimes a bit confusing.

One of the worst examples is that fishmongers at the Mercat d’Olivar call it gallo, but they also use that name for the John Dory when they should be using pez de San Pedro, the usual name for John Dory. So you will frequently see megrim sole and John Dory with the gallo tag. But both fish look quite different so you shouldn’t have any difficulty telling which is which.

However, most people call the megrim sole by its local name of bruixa, pronounced ‘broosha’. When you want to buy megrim sole at the Mercat d’Olivar or Santa Catalina markets, look for the bruixa (or bruja) tag or ask for ‘broosha’.

The bruixa, which means witch, is one of Majorca’s most widely available flat fish. It is in season from January to June so it is now at its best. 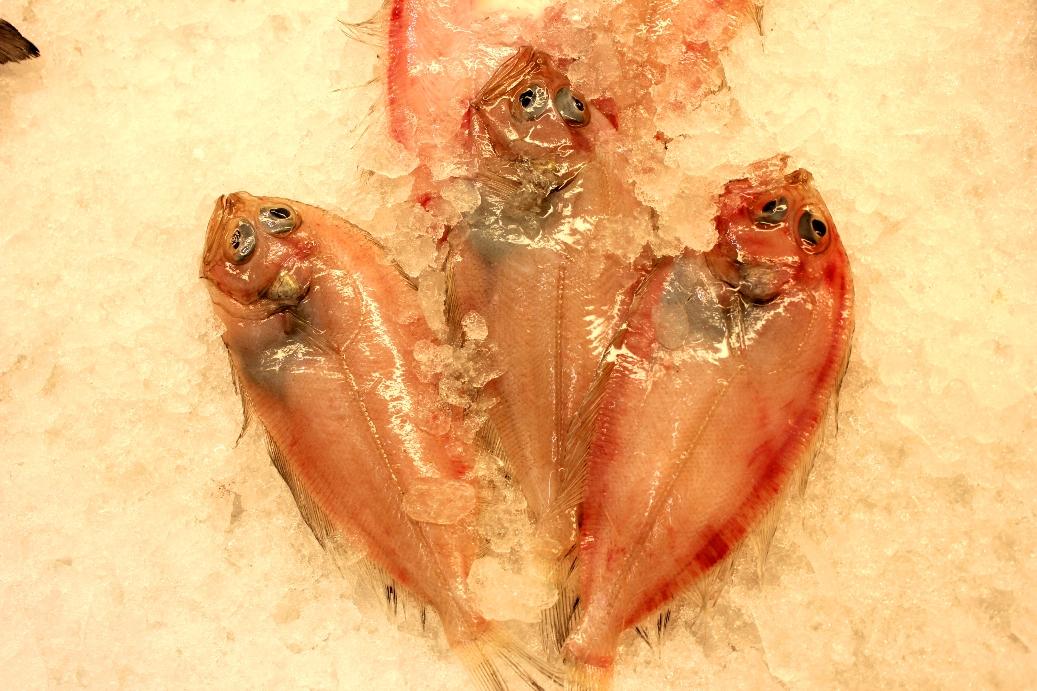 There was a time when the bruixa wasn’t as highly rated as it now is and it was extremely cheap. Prices in recent years have gone up but it is still a good buy.

Not all that long ago the bruixa’s main role in the food chain was that of impostor: some fishmongers and restaurants passed it off as sole. And that despite the fact that most Majorcans can tell the difference between a bruixa and a lenguado (sole) by its colouring and shape.

The bruixa, which is classified as a white fish, is easy to identify because it is of a light fawn colour and looks almost transparent. The smaller they are, the most translucent they look. Some bruixas are enormous and can weigh up to two kilos. The smallest ones are always the cheapest. Bruixas and other flat fish are easy to clean: a black patch near the head is the gut and you can remove it by snipping it out with scissors.

Bruixas are a fine looking fish, especially the bigger ones, so it’s a good idea to cook them whole, complete with head and lateral fins. As the fish is easily cleaned, don’t ask the fishmonger to do it because she usually scissors off the head, tail and fins, thus spoiling its rather magnificent appearance.

The bruixas’s skin is much finer than the sole’s and doesn’t have to be removed before cooking. It can be made according to most of the recipes for sole.

The very big ones can be baked or grilled and the medium-sized are ideal for shallow frying. The fillets can be extracted from the big ones and used for most recipes that call for fillets of sole.

Despite the practices of some unscrupulous restaurant owners, the bruixa is never a substitute for sole which, strangely enough, is classified as a blue fish. The flesh of the bruixa isn’t as firm as that of the sole and it isn’t suitable for those recipes in which sauces play a vital role.

It is best to treat the bruixa to the simplest of cooking methods: fried or grilled in olive oil or butter (or a mixture) with a final drizzle of fresh oil or butter and a sprinkling of fresh herbs of your choice.

The extra butter or oil at the end is important for keeping the fish nice and moist. A good-sized bruixa is a fine fish in its own right and doesn’t have to masquerade as a sole.
The tiny bruixas are at their best when cleaned, coated with flour and shallow-fried in very hot olive oil. If the tails and lateral fins are very crisp they make a crunchy morsel, especially when eaten with the fingers and accompanied by a glass of white wine or sherry.

Unlike the French, Spanish cooks fry, grill or bake flat fish with never a fancy sauce in sight. More than most species, sole and other flat fish benefit from simple plain cooking in order to preserve their exquisite flavour.

Flat fish are not especially popular in the País Vasco but the Basques are such good cooks they automatically give flat fish the simple treatment, such as baking them with butter, herbs and breadcrumbs.

Sometimes a baked fish is served with steamed clams and other shellfish. Even quite elaborate recipes done with thick fillets have simple sauces based on fumet, reduced juices, a little cider or wine and perhaps egg yolk.

Like the País Vasco, Asturias is famous for its cider and Asturians cook sole and other flat fish in an earthenware dish with butter, shelled clams and langostinos, plus a generous amount of cider that is reduced with the fish and shellfish juices to make a light and tasty sauce.

Asturian cooks have a different way of frying sole and bruixas: they soak them in milk, coat them lightly with flour and then fry them in lard instead of butter or olive oil.

This is a tasty way of doing sole and bruixas and it is worth trying now that good Iberian pig lard is on sale at most well-stocked supermarkets.